Essay on Family Planning in India: The Government of India widely sponsors family planning in India. From 1965 to 2009, the rate of contraceptive usage has tripled, and the fertility rate has more than halved. Still, the national fertility rate in total numbers remains high, creating concern for long-term population growth. India sums up to 1,000,000 people to its population every 20 days. The extensive family plan has become critical in an effort to restrain the predicted population of two billion by the twenty-first-century end. In this article, you can read the short and long essay on family planning in India, its history, development, government’s role, and impacts.

We provide children and students with essay samples on a long essay of 500 words and a short essay of 150 words on the topic “Family Planning in India” for reference.

Short Essay on Family Planning in India 150 Words in English

India is a developing country. It is the second-largest country globally and is increasing fast compared to the dwindling and depleting resources. By the completion of this century, it would expand to 2000 million people. It displays an accretion of about 2.4 per cent. Consequently, the experts have begun blaring warning bells. This rising in population has created serious problems.

More population indicates high pressure on our food sources, housing, clothing, employment, education, etc. With the excellent progressions in science, medicine and health-care, the death rate has come down considerably, but the pace of birth continues almost the same. It makes adequate family planning measures a necessity. In the inadequacy of control on population, all five Year Plans, including developmental schemes, are obliged to be failures.

Family Planning aims to reduce the birth rate and better health, family welfare, and care for children and mothers. To accomplish these goals, a broad-based mass motivation and education programme is being pursued earnestly. It is entirely a voluntary programme and an essential part of the overall growth strategy, including maternity, health, infant care, family welfare, women’s rights, and nutrition. Essay on Family Planning in India

Family planning is used as a substitution for the use of contraception. However, it frequently involves methods and practices in addition to contraception. Family planning has become a catch-all slogan for many of the work initiated in this area. However, modern notions of family planning tend to set a woman and her childbearing decisions at the centre of the discussion, as notions of women’s empowerment and reproductive sovereignty have augmented traction in various parts of the world. It is usually implemented to a female-male couple who need to restrict the number of children they have or control pregnancy timing (also known as spacing children). Family planning may incorporate sterilisation, as well as abortion.

The history of family planning is complicated and long. It records back to the initial days of humankind. There has never been a point when women and girls didn’t want to constrain how many children and when should they have.

From 1927 to 1953, Raghunath Dhondo Karve published a Marathi magazine Samaj Swasthya. In the magazine, he constantly discussed the issues of society’s well-being, including population control through contraceptives. He explained that using contraception would help to stop unwanted pregnancies and induced abortions.

Karve proposed that the Indian Government should take up a population control plan, but was met with defiance. Mahatma Gandhi was the primary foe of birth control. He believed that self-control is the best contraceptive. However, Periyar’s opinions were strikingly dissimilar from that of Gandhi. He saw birth control as a medium for women to control their own lives. India became the first country in the developing world to build a state-sponsored family planning program named the “National Family Planning Program”. The program’s chief purposes were to decrease fertility rates and slow population growth as a medium to propel economic development.

In India, the family planning program helped in reducing 19.9% birth rate. By 1996, the program had been estimated to have prevented 16.8 crore births. This is partly due to government interference that founded many clinics and the implementation of fines for those who avoided family planning. 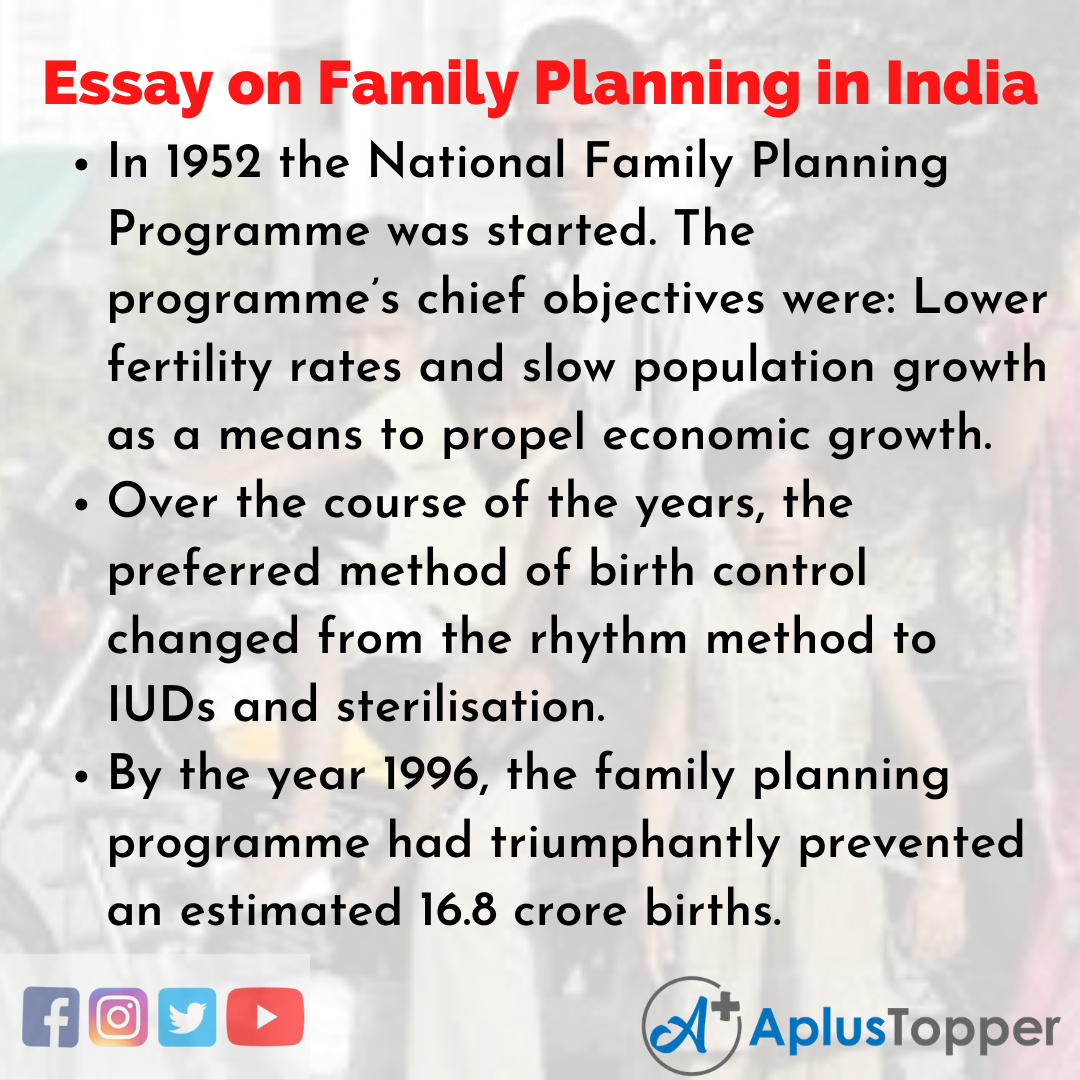 Long Essay on Family Planning in India 500 Words in English

In 2016, India’s total fertility rate was 2.30 births per woman, and 15.6 million abortions were performed. High abortions rates follow a high number of unintended pregnancies, with a rate of 70.1 unintended pregnancies per 1000 women aged between 15 to 49 years. Overall, India’s abortions make up for one-third of pregnancies and out of all pregnancies occurring, almost half are not planned. On the Demographic Transition Model, India falls in the third stage due to diminished birth rates and death rates. By 2026, it is predicted to be in stage four once the Total Fertility Rate reaches 2.1.

In 1952 the National Family Planning Programme was started. The programme’s chief objectives were: Lower fertility rates and slow population growth as a means to propel economic growth. Over the course of the years, the preferred method of birth control changed from the rhythm method to IUDs and sterilisation.  In the 1970s, the former Prime Minister Indira Gandhi had conducted a forced sterilisation programme which resulted to people having an aversion to sterilisation. By the year 1996, the family planning programme had triumphantly prevented an estimated 16.8 crore births.

In 1952 India was the first country to launch a national programme for family planning. The family planning programme has been chiefly in place due to the efforts of the Indian government. This programme had experienced a massive conversion from its initial days when the focus was on a clinical procedure to the present day when the focus is on reproductive health and the reduction of maternal and child mortality, infant mortality rates, and morbidity.

National Population Policy (NPP) was launched in 2000 and has helped reduce fertility rates. As part of the programme, the government has instituted several clinics for family planning and reproductive health. There is also information through media, propagating family planning, the requirement for spacing between children, and having fewer children per couple.

The government has also familiarised people with the slogan, “Hum Do, Humare Do”, for promoting the Two-Child Norm. There are also penalties, as no government jobs if the person has more than two children. However, this has also failed in some regions leading to more sex-selective abortions.

Women in India are not given adequate guidance on contraception usage and what they are planting in their bodies. From 2005 to 2006, data was collected to designate only 15.6% of women using contraception in India were informed of all their options and what those options actually do. The use of contraceptives has been growing gradually in India. In 1970, 13% of married women used modern contraceptive techniques, which rose to 35% by 1997 and 48% by 2009.

Contraception awareness is near-universal amongst married women in India. However, by 2009, 76% of married Indians reported important problems in obtaining a choice of contraceptive techniques. In 2009, 48.4% of married women were expected to use a contraceptive method. About three-fourths of these were using female sterilisation, which is the most common birth-control method in India. Condoms, at a mere 3%, were the next most common method.

Contraception usage varied greatly among Indian states, with Meghalaya being the lowest at 20%, closely followed by Bihar and UP with a reported usage of 30% . It is essential to record that sterilisation is a general practice in India. In India, contraceptive practices are skewed heavily towards terminal procedures like sterilisation, which means that contraception is practised essentially for birth limitation rather than birth planning. It is natural to use camps to enforce sterilisation. This method can be executed with or without approval.

In 2005, the Government of India founded the National Rural Health Mission (NRHM) to address some of these issues amongst others. The objective of the NRHM involves the provision of adequate health-care to rural areas, particularly to poor and vulnerable populations.

Through the NRHM, special stipulations have been made to discuss concerns for reproductive health, primarily for the youngsters who are more likely to engage in risky sexual behaviours and less inclined to visit health facilities than adults. Conclusively, the NRHM aims to expedite India towards the Millennium Development Goal objectives for reproductive health.