Essay on Fair: Fairs have been a part of traditions all around the world. Where else would you find a place that has entertainment, food, and business altogether? The world is a place that is full of countries, cities, and villages. Many cultures are prevailing around the world where fairs are a place where masses of people gather and are entertained. Let’s see these long and short essays that will help you have the basic idea on the topic of Essay on Fair, and we have also framed ten points on the topic to give you a brief idea on how to frame an essay on this topic.

Long Essay on Fair in English 500 words in English

Fair Hearing this word, we immediately start imagining a big ground full of all kinds of people and rides that have people sitting on them screaming from the bottom of their hearts. We picture many stalls selling earrings and clothes to tasty food and toys of all kinds. Fairs are a representation of different types of people who come to see many things and have fun at one single place. After all, it is a place where there is no boundary set for a specific type of people or fun. Fair is the exchange of the creativity and productivity of different cultures.

The culture of fair commenced between the early 1000s and 1200s. It started as an economic activity proving as an air market putting a break to the boring business processes and activities of the year. The fair is an annual break to the year when everyone is fed up with their routines throughout the year. A fair is a multiday event that is a huge benefit for all the buyers and sellers, even from foreign merchants. The truly international fairs took place in northeastern France because these were the only fairs that had the exchange of different currencies and coins. India is not just a diverse country but it is the epitome of diversity due to the different cultures and different fairs.

The oldest fair in the history of India is the ‘Kumbh Mela’ which is above 2000 years old. When the planet Jupiter, sun, and the moon align, those dates are considered good for Kumbh Mela, which takes place every 3 years. The Kumbh Mela in 2013 recorded a human gathering of 10 crore people which is a world record. If you are looking for beautiful fabrics. Intricate earrings and a whole lot of other things, your best bet would be the Pushkar Mela in Rajasthan. It is a five days long fair that has competitions like ‘the longest mustache’ and many camel trading.

Another old fair is the Hemis Gompa Fair in Ladakh which is 300 years old. It is celebrated on the birth anniversary of Guru Padmasambhava and is a special occasion for Buddhists. The lamas there are dressed in eccentric clothes and the dance performance there represents the story of how the guru defeated the devils. The Goa carnival is also a huge celebration of all the villages and goa itself with lots of music, dancing, and colorful masks. The carnival attracts millions of people from around the world.

Some other fairs are the Surajkund crafts fair in Haryana where even international countries participate and millions of people arrive in it. The Rath yatra in Odisha and desert festival amidst the Thar desert are pure delights well. Thus, the culture of fairs has started long back and this is the best way to understand and glorify the unique culture of India.
This long essay will be helpful for students in classes 7, 8, 9, and 10.
You can access more Essay Writing on this given topic and many others. 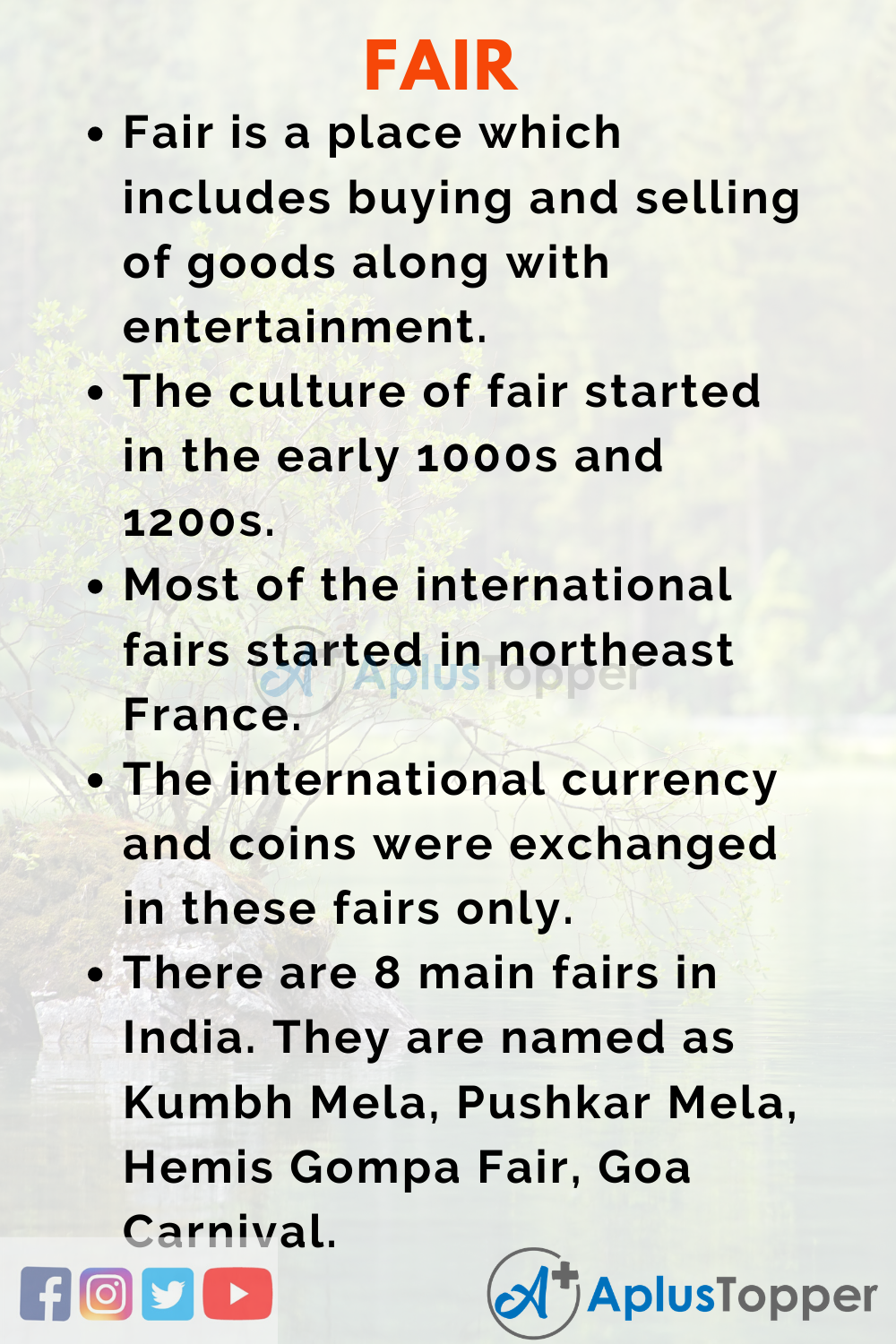 Short Essay on Fair in English 150 words in English

A fair is a marketplace where buyers and sellers look around for their choice of things. There are both cities and villages in India where fairs take place with enthusiasm and creative products. There are many fairs across India. The oldest one which is over 2000 years old is the Kumbh Mela which commences during the alignment of Jupiter, the sun, and the moon. The Pushkar camel fair is a great place for camel trading and competitions like who has the longest mustache? The Hemis Gompa fair is a fair that is 300 years old in Ladakh celebrated on the anniversary of Guru Padmasambhava. Another happening festival fair is the goa carnival which attracts millions of people every year.

There are innumerable events like these in India where there is fun along with business opportunities in there. The fair culture started in the early 1000s and 1200s but has taken speed in the present world and is an inevitable part of the Indian culture and tradition.

10 Lines on Fair Essay in English 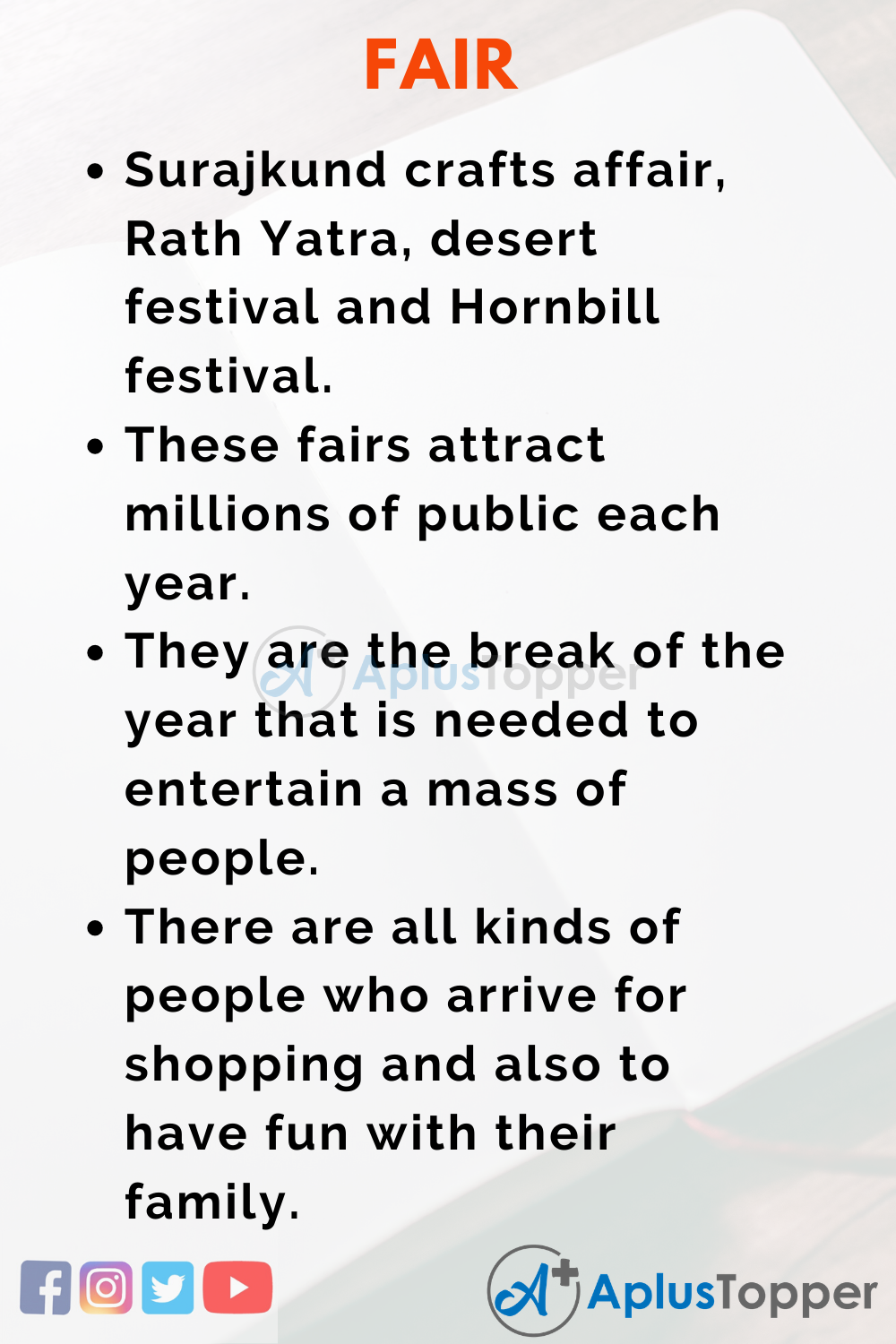 Question 1.
What is a Fair?

Answer:
A Fair is a gathering of people that allows them to commence with commercial activities and also have fun at the same time.

Question 2.
How many types of fairs are there around the world?

Answer:
More than 100 fairs have been held in 20 countries since the 19th century.

Question 3.
Which is the oldest fair in history?

Answer:
The Brooklyn fair in 1809 was an annual agriculture fair, held in Brooklyn, Connecticut.

Question 4.
which is the fair that has attracted the highest people in India?