Essay on Elephant: Oce flourishing in Asia and Africa, the population of elephants has reduced drastically during the last century, primarily due to the illegal trade of ivory. While some populations are now stable and increasing, the species continues to be threatened by poaching, illegal ivory trading, and deforestation.

We have provided samples on the given topic of Essay on Elephant. There is one long essay of 500 words; a short essay of 100-150 words; and ten lines on the subject of Elephants.

Elephant essays is usually helpful for students in classes 7, 8, 9, and 10. They are asked to write these essays for assignments and exams.

Elephants are the world’s largest mammals living on land. The African male elephants are roughly 10-11 ft tall, while the females are about 8 ft tall. The Asian male elephants, however, are between 8-9 ft in height, whereas the females are 7-8ft in height. Elephants use their long trunks to collect food, suck up water for drinking and bathing, and also to produce low and high-frequency sounds for warnings, signals, calls for help, etc. Elephants have this special ability to produce a very low-frequency sound which is not audible to the human ear. These sound waves travel over vast distances and can reach other elephants. These sounds are usually used as distress or signals by elephants. African elephants are the largest species of elephants and can weigh up to 8 tons.

In the case of both, Asian and African, the herd of Elephants is led by an Alpha female. These herds form a strong bond of females and calves, while the males live in isolation. A calf is born into the herd every 4 years. Female calves stay with the herd forever, while the males leave the herd after a point in time.

More Animal Essay Writing topics on such subjects can be found.

To survive and meet their ecological needs, including food, water, and space, elephants need extensive land areas. An elephant can average feed up to 8 hours and in one day. As a result, people frequently come into conflict with people fighting for resources as they lose their habitat.

As a result of their high degree of intelligence and adaptability, many farmers prefer domestic elephants and training them to help out in their work as they can carry heavier loads, and work can be done much faster. As a result, most farmers love their elephants and treat them with great care and make sure they are always healthy and happy so that they can do their work.

Researchers from the University of Brighton also discovered that elephants can distinguish between human voices, gender, and ethnic grou11ps, and identify whether they are a threat or not. Similarly, there are many videos and studies which show that elephants can adapt to their surroundings and use tools to their advantage.

Elephants show empathy. There are many studies and instances which show elephants showing empathy and concern for other elephants as well as humans when it is needed. Elephants understand emotion and know when another of their herd is in a bad state. Unlike most other animals, elephants mourn their dead. They have been known to stand beside the corpse for hours, and sometimes even bury their dead.

At last but not the least, a captive elephant in Korea named “Koshik” has learned to mimic certain Korean phrases like “hello”, “lie down”, and “sit down.” This discovery baffled researchers, and they say that this is probably because the elephant has been raised with humans, and this is his way of bonding with them.

The African elephants are comparatively larger than their Asian relatives. Elephants use their long trunks to collect food, suck up water for drinking and bathing, and also to produce low and high-frequency sounds for warnings, signals, calls for help, etc. Elephants have this special ability to produce a very low-frequency sound which is not audible to the human ear. These sound waves travel over vast distances and can reach other elephants. These sounds are usually used as distress or signals by elephants. African elephants are the largest species of elephants and can weigh up to 8 tons. Elephants are considered to be one of the most intelligent animal species to ever exist. we will soonly update Essay on Elephant in Hindi, Telugu. Malayalam, English and Urdu.

10 Lines on Elephant Essay in English 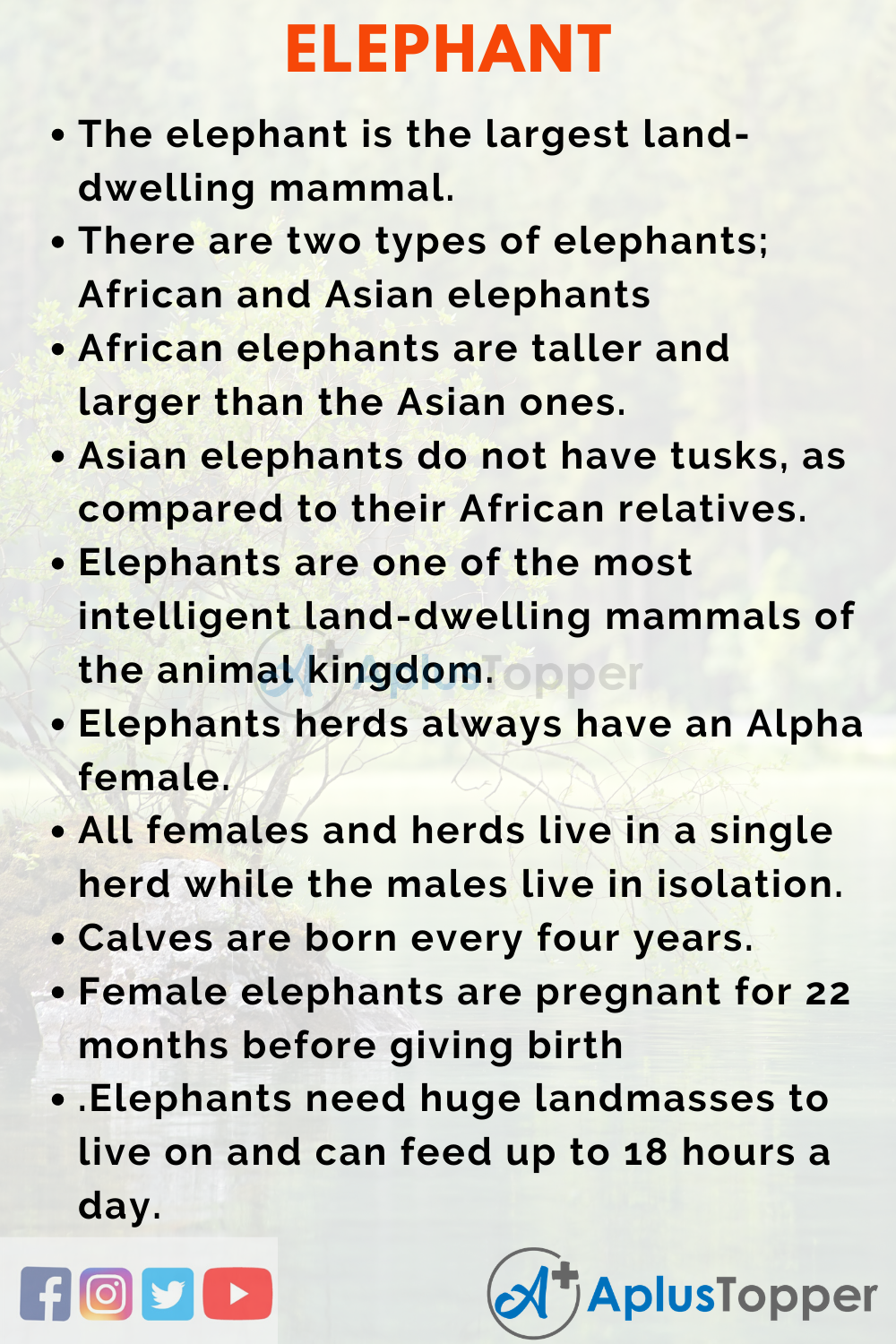 FAQ’s on Essay on Elephant in English

Question 1.
How tall are elephants?

Answer:
The elephant is the largest land-dwelling mammal. The height of African elephants ranges from 8-10 ft, while that of the Asian ones ranges from 7-9 ft.

Question 2.
What are the different types of elephants?

Answer:
There are two types of elephants; African and Asian elephants.

Question 3.
Why are elephants in danger?

Answer:
Elephants have reduced in number drastically in the last century because of illegal ivory trading. Ivory is made of elephant tusks and has a lucrative market, so hunters and poachers are always on the hunt for elephants to sell their tusks in the black market.