Essay on Election and Democracy: Democracy is always better than dictatorship. In a democracy, there is the active participation of every citizen. Here, the leaders are decided by the choice of the people. Elections take place in the country to decide the leaders and the leader who’s got the majority is elected for serving the country.  In this essay, we will talk about democracy and elections that happen in a country.

Long Essay on Election and Democracy 500 Words in English

Democracy gives people the power to select leaders by choice. Without democracy, people hold no power and they just become a slave who follows the orders of their leaders. They got no choice but to follow their instructions and laws made by them. India was a monarch before the rule of the British Colonials but after Independence, it became democratic.

In today’s time, the ministers and members of parliaments are selected by the people of the country. They hold the right to vote and it is given to every citizen of the country above the age of 18 years. This right is given by the constitution of India in which there is no discrimination based on caste, creed, colour, and religion. If you are a citizen of India, then you can vote for the deserving candidate.

The representatives and leaders are selected through the process of election. In an election, the representatives from their party convince the people to vote for them by holding campaigns. If the party wins the seats in the majority then they will rule the government and become the representative of the people. The elections are conducted by the election commission of India and make sure that all the things are done properly and to the books.

If you are 18 years old or above then you are eligible to vote for your preferred candidate. To vote for your preferred candidate or party, you should have a voter ID card with you for the identification process. The voter ID card makes sure that you are a citizen of the country and that you are eligible to vote. The election commission makes sure that there will be no partiality or cheating in the election process.

Democracy gives power to the people so that they can choose the best leader for serving the country and work towards a brighter future. In a democracy, the power lies in the hand of people to shape the country and to make it even better.

The identification of the voters remains hidden as no one can know who voted for which party. It is done just for the safety of the voters so that their personal information remains safe and secure. In a dictatorship, the power lies in the hand of the leader only. He/she is the one who makes the laws and his/her order has to be accepted by all the people. Thus, you don’t have the rights in the dictatorship as you can’t contradict the choice of the leader.

That’s why it is seen that democratic countries are always better than dictatorship countries because, in democratic countries, people have the power to choose and decide. They can choose their leader which will lead them to success and also leads the country to a better path. It is because of democracy and election, India is developing and upgrading at a rapid pace and competing with other countries.

So, if you think you are better than other leaders and want to do something for your country, then you have the right to compete in the elections. 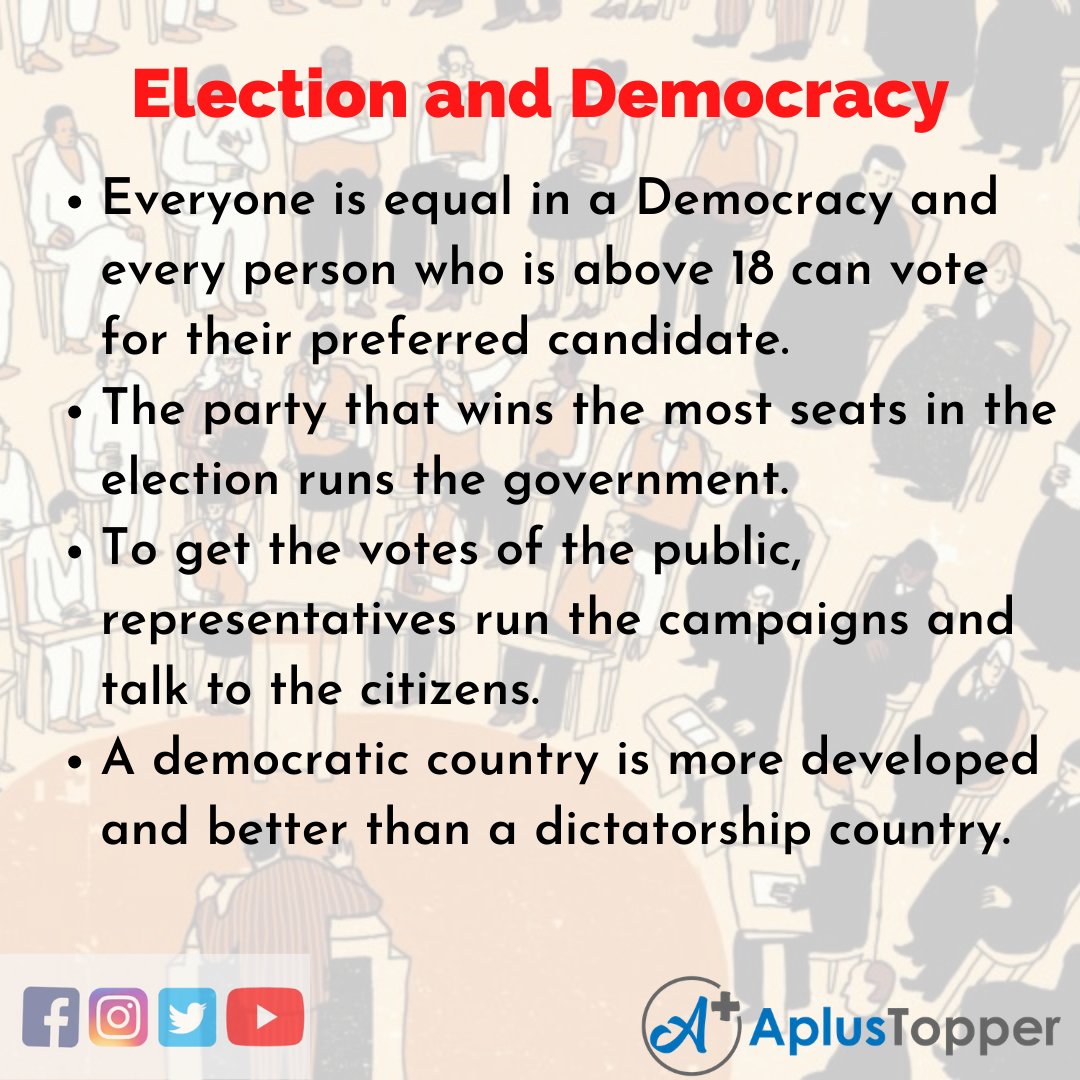 Short Essay on Election and Democracy 150 words in English

India is the number one democratic country in the world.  After suffering at the hands of British rules, India finally became democratic in 1947. Democracy gives the power to the people to choose their leaders. In a democratic country, leaders are decided based on elections. In India, people give their vote to their deserving candidate who they think is capable of running the country.

Without democracy, the country’s system would depend merely on the leaders and people will have no option but to accept the orders given by them. In a democracy, people hold the power to choose their representatives. They can’t contradict their decision, neither have the power to change their leaders. That’s why democracy is always better than dictatorship. In a democracy, there is no discrimination based on caste, gender, status and every person is considered equal and get equal rights. These rights cannot be taken by anyone from the citizen of the country.

10 Lines on Election and Democracy Essay in English 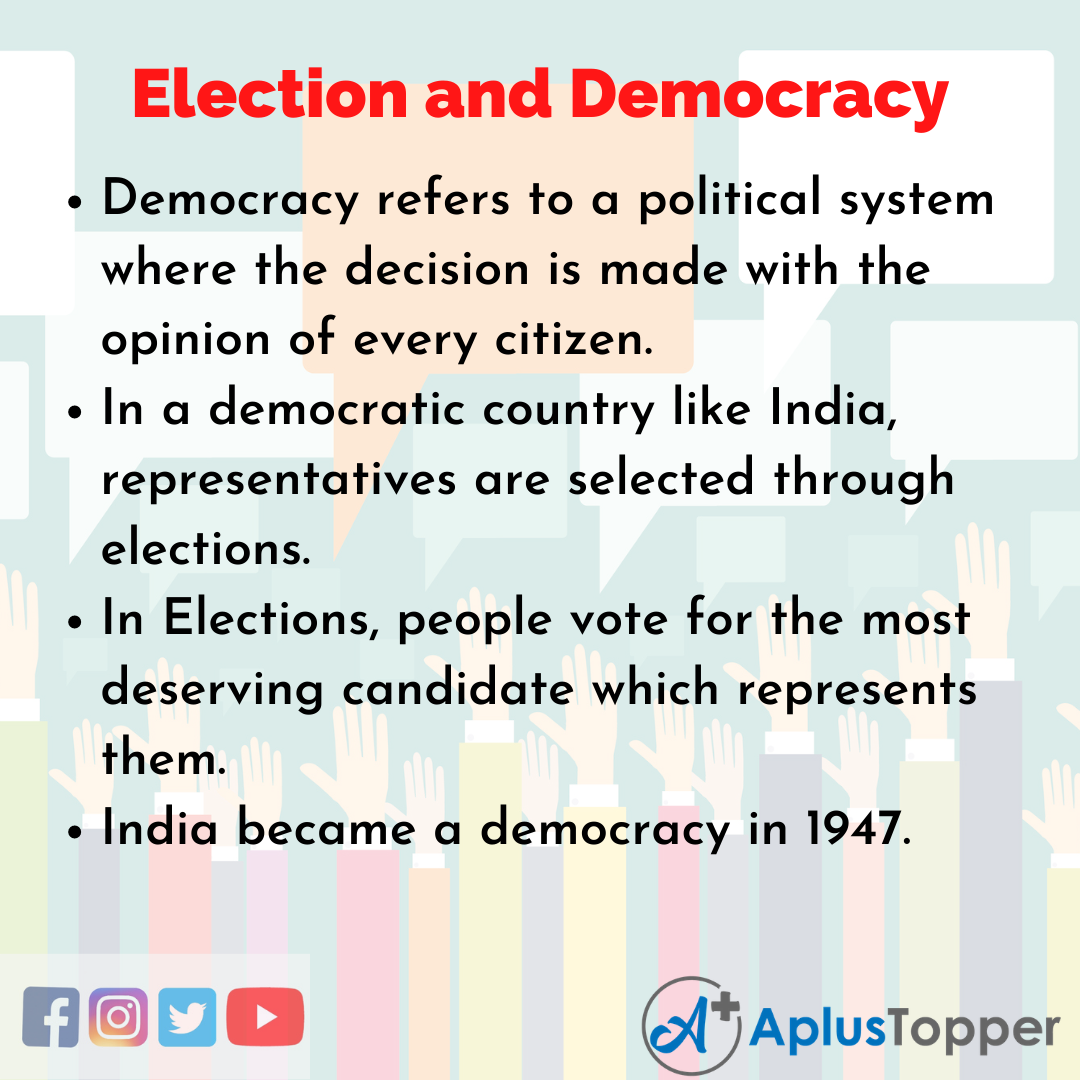 FAQ’s on Election and Democracy

Question 1.
How are leaders selected in a Democratic country?

Answer:
Leaders are selected through the election process in a Democratic country.

Question 2.
In which year did India become democratic?

Answer:
In the year 1947, India became a democratic country.

Question 3.
At what age, a citizen becomes eligible for voting?

Answer:
In India, a person who is 18 or above can vote for their representatives.