Essay on Effects of Global Warming on Coral Reefs: Coral reefs, one of the most diverse ecosystems on earth, comprise only about 0.5 percent of the ocean floor. They are a shelter to numerous marine species and beneficial both to natural ecosystems and human existence.

We offer students with a long essay sample of 500 words and a short essay sample of 150 words on the topic Essay on Effects Of Global Warming On Coral Reefs for reference.

Long Essay on Effects of Global Warming on Coral Reefs is usually given to classes 7, 8, 9, and 10.

Changes in marine ecosystems are associated with rising water temperatures and related changes in ice cover, salinity, oxygen levels and circulation. These changes result from climate change, and they are negatively affecting marine organisms, mostly on the corals.

Coastal conditions of small islands are deteriorating because of coral bleaching and beach erosion. Intense tropical cyclones will likely increase the damage of coral reefs. Coral reefs are sensitive to thermal stress, and their ability to adapt to changing conditions is low. A specific increase of 1 to 3°C in sea surface temperature can cause widespread mortality and more frequent bleaching.

Increased greenhouse gases result from human activities like burning fossil fuels for heat, production of certain industrial products, fertilization of crops, deforestation, etc. This results in climate change and ocean acidification. Warming of ocean water causes thermal stress that contributes to coral bleaching and other infectious diseases. The rise in sea level leads to increases in sedimentation for reefs located near land-based sources of sediment. Sedimentation runoff can lead to the suffocation of the coral.

Changes in occurring patterns of storms lead to the destruction of coral reefs. Changes in precipitation which causes increased runoff of freshwater, sediment, and land-based pollutants contribute to algal blooms and cause dirty water conditions that reduce the light, which is harmful to the corals.

Altered or change in the pattern of ocean currents or circulation of the ocean water due to resultant effects of climate change leads to changes in connectivity and temperature regimes. This results in lack of food for corals and hampers dispersal of coral larvae. Ocean acidification results from an increase in the level of CO2 in seawater. This leads to a reduction in pH levels which reduces the rate of coral growth and structural integrity.

Different studies have revealed the impacts of increasing CO2 levels on corals. High levels of carbon dioxide make it difficult for marine organisms to build up their calcium carbonate shells. A study in the Red Sea reef revealed that, globally, when CO2 concentrations are at 560 ppm, corals will dissolve instead of accumulate calcium carbonate, resulting in massive die-offs of the corals. Increasing CO2 levels associated with climate change and global warming results in detrimental processes to coral reef ecosystems. CO2 concentrations will increase in oceans, and corals will have to live in a chemically unhealthy and unstable ecosystem if the greenhouse gases continue to be emitted.

Fifty-five different species of corals in the Pacific Ocean were currently considered either threatened or endangered species due to the warming of the ocean water and ocean acidification being the primary mechanisms for their dying. This implies that climate change impacts are among the largest concerns for corals, on the local and global scale. These effects are very significant and are resulting in more and more threatened corals species.

Coral reefs are an essential part of the marine ecosystem. It would be detrimental for the planet and also the whole human existence if they completely die out. Climate change is a widespread concern and cannot be solved quickly. Since corals offer such a wide range of benefits to humans, specific efforts must be made to save them, and proper action needs to be taken immediately. One of the most significant changes to save coral reefs would be to decrease CO2 emissions levels. 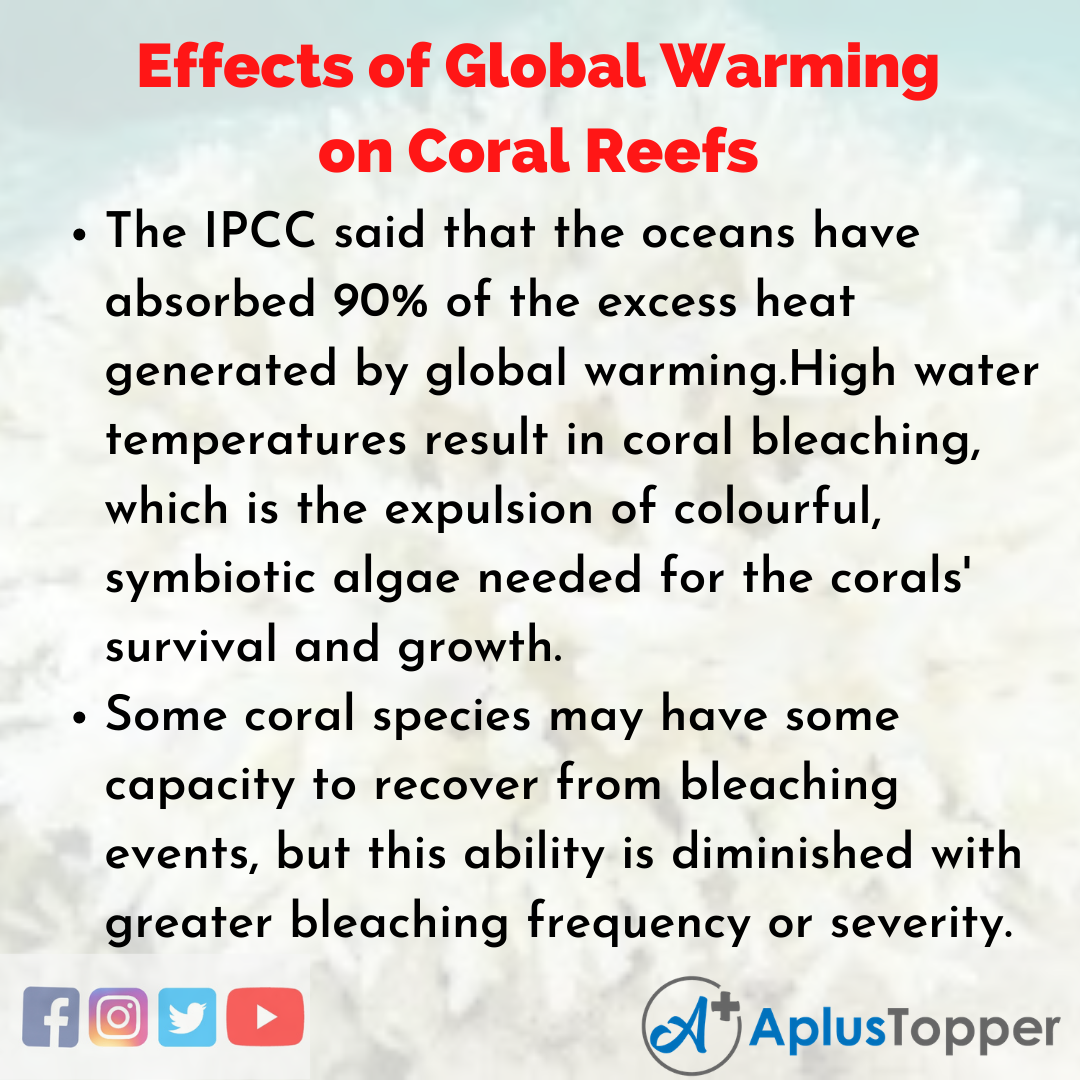 Human communities derive certain benefits from coral reefs, including food, income, recreation, coastal protection, cultural and traditional settings, and many other ecological goods and services. Despite their biological diversity, productivity and importance to humans, both warm and cold-water coral reefs are negatively impacted by global warming.

As a result, many coral reefs are rapidly declining all over the world. While local factors like pollution and overfishing have a significant impact on coral reefs, ocean temperature and chemical composition of ocean water due to anthropogenic activities and global warming are drastically reducing the distribution, abundance, and survival of entire coral reef ecosystems. As a result, this is harmful to the marine ecosystem and for maintaining a balance. 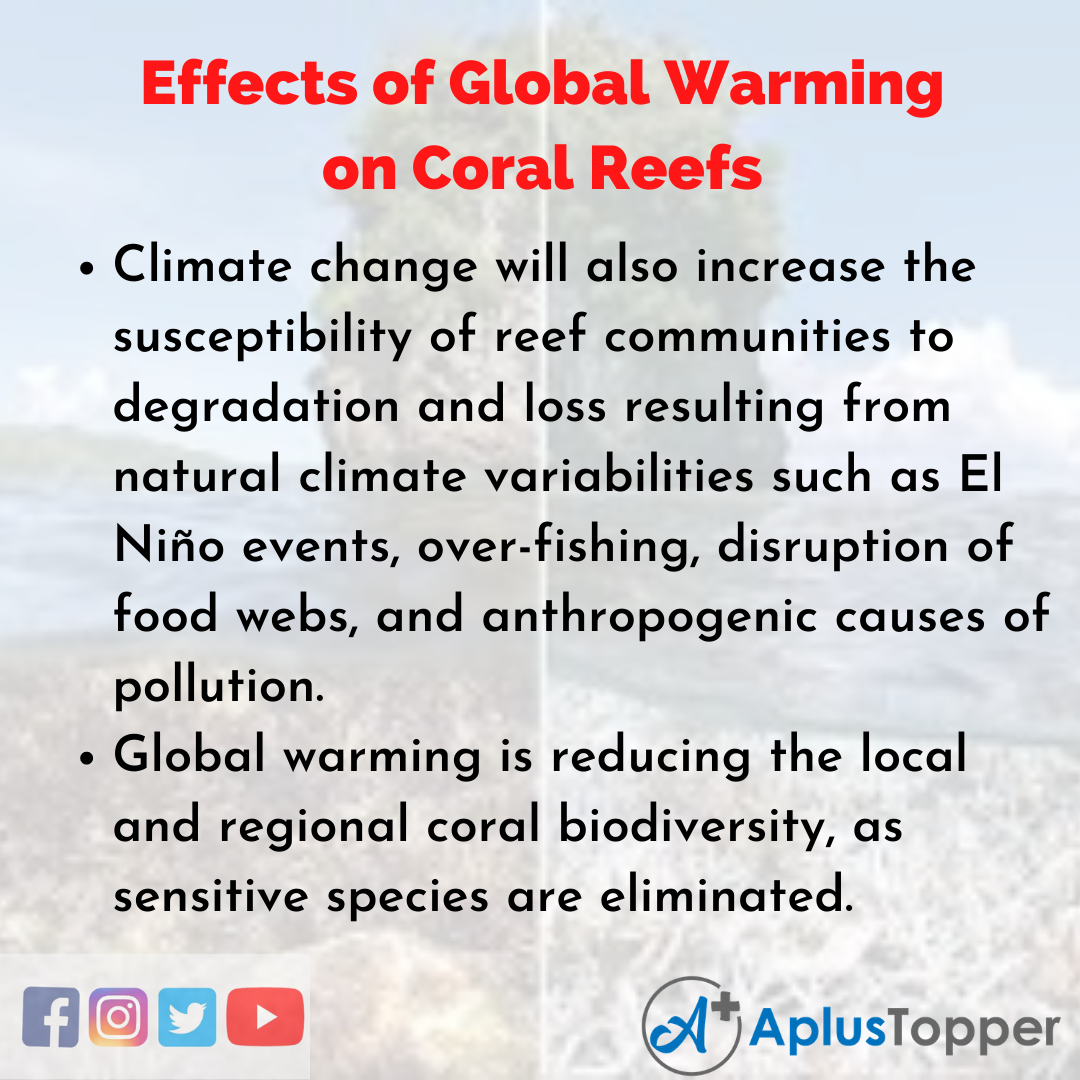 FAQ’s on Effects of Global Warming on Coral Reefs Essay

Question 1.
What is the direct effect of global warming on corals?

Question 2.
How is the ocean water getting affected by global warming?

Question 3.
What is destroyed percentage of corals by global warming?

Question 4.
What are the other effects of global warming on corals?