Essay On Economic Reforms In India: India is a developing economy. The stagnation of the economy in the beginning and the evil cycle of poverty, which were evident before Independence, have paved the way for rapid economic growth. Economic reforms are the changes in a country’s economic policies, that are crucial for reviving a sluggish economy and accelerating the pace of development.

“An underdeveloped economy is characterised by unutilised manpower
on one hand and unexploited natural resources on the other.” -First Five Year Plan

Long Essay on Economic Reforms In India 500 Words in English

Below we have given a long essay on Economic Reforms In India of 500 words is helpful for classes 7, 8, 9 and 10 and Competitive Exam Aspirants. This long essay on the topic is suitable for students of class 7 to class 10, and also for competitive exam aspirants.

Rajiv Gandhi took oath as the Prime Minister of our country in 1985. In his regime, various changes were attempted in the country’s economic sector, which included improvement in productivity and adoption of modern technology. It called for greater participation of the private sector. The economic reforms of deregulation and liberalisation began in 1991. Since then, there were noticeable fundamental and irreversible changes in the economy, government policies, outlook of business and industry, and in the mindset of Indians in general. From a deficit economy of goods and foreign exchange, India became a surplus one; from an agro-based economy, it emerged as a service-oriented one. The process of economic reforms was essentially crisis-driven and was adopted in order to mitigate the economic bankruptcy of the 1980s.

A quick survey of the various reforms introduced so far by the government revealed that theif.components aimed at common ends—of reducing fiscal indebtedness, trade liberalisation and trade policy reforms. These required removal of quantity restrictions, rationalisation of taxation, public sector disinvestment and restructuring of the public expenditure.

The introduction of the 73rd to 74th Amendments of the Constitution (1995) increased the scope of decentralisation of political and economic power and devolution of fiscal authority to the local bodies such as the ‘panchayats’ and ‘nagarpalikas.’ This enabled the economy to be sensitive to the local needs of the people and let the benefits of the reforms to trickle down to the lower strata of the society. Moreover, with the outstanding performance of the software industry, changes in the skilled labour market are also evident.

Not only is the skilled labour in this sector able to meet the high quality standards of the advanced nations, it is also able to command salaries which commensurate with its abilities. The emphasis in the present times of the economic reforms in India must be on resources, creation and management rather than demand management. Public sector disinvestment would raise current revenue besides reducing government liabilities. At the other end, restructuring of expenditure would curb the unnecessary consumption liabilities and make them more sensitive to public investment needs. The results of liberalisation reached the peak, when India recorded its highest GDP growth rate of 9% in 2007. This made India, the second fastest growing world economy, after China.

In 2010-11, the Indian economy registered a growth rate of 8.5%. Although, the agricultural sector has shown fluctuations, the Industry and Services have continued to expand steadily and have acted as twin engines propelling the overall economic growth. Despite spiraling global crude prices, the inflation has been modest and rapid growth in exports and imports have been seen. India’s food production also increased considerably. After the initiation of economic reforms, a faster development of physical infrastructure has been achieved. The cycle of growth and savings has been virtuous over the years and is to continue for years to come. Poverty has reduced considerably.

However, a comparison of the pre-reform and post-reform periods showed that there was a decline in the trust that labour had reposed with the authorities. The number of workers’ strikes and lock-outs increased. This happened because workers were afraid of loss of jobs due to privatisation and liberalisation. 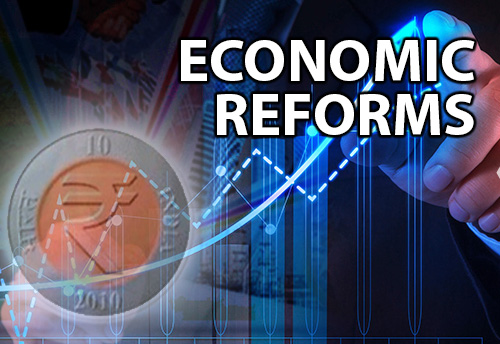 Short Essay on Economic Reforms In India 200 Words in English

Below we have given a short essay on Economic Reforms In India is for Classes 1, 2, 3, 4, 5, and 6. This short essay on the topic is suitable for students of class 6 and below.

The present BJP government led by PM Narendra Modi promises to promote economic sustainability, while simultaneously targeting a 10% growth rate. By 2020, India will become the youngest country of the world, with 64% population in the working age group. The government will work towards clearing pending proposals.

It will also liberalise foreign investment across key sectors. The Prime Minister has also assured of a “maximum governance and minimum government” approach. After 67 years of Independence, if we scale the performance of India against other countries of the world, especially with those in Asia, we note that though a lot has been achieved, yet we need to do a lot more. We need to learn from our past follies and frame our future strategies accordingly.

Our owri people excel outside the country in various sectors but we fail to optimally use the best talent of the nation for the growth of our own economy. We need to find ways of providing better opportunities to our people within the country and stop brain drain, which in turn creates all sorts of other drain-outs from the country and nullifies its progress. India has achieved many milestones, yet not enough has been done to eradicate poverty, illiteracy and other major issues. We often fail to use the best effective human capital for running the country, both for public as well as private sectors. This needs serious re-thinking. As APJ Abdul Kalam has rightly said

“India will only truly shine, when it shines for one and all.”