Essay on Drug Addiction: Addiction refers to the harmful need to consume substances that have damaging consequences on the user. Addiction affects not just the body but also on the person’s mental health and soundness of mind. Addiction is one of the most severe health problems faced around the world and is termed as a chronic disease. A widespread disorder ranges from drugs, alcohol addiction to gambling, and even phone addiction.

One of the most unfortunate yet common addictions that affect millions today is drug addiction. Also referred to as substance – use disorder, it is the addiction to substances that harm neurological functioning and a person’s behavior. The essay provides relevant information on this topic.

There are two essays listed below. The long essay consists of 500 words and a short essay of 200 words.

Drug addiction, also known as substance–use disorder, refers to the dangerous and excessive intake of legal and illegal drugs. This leads to many behavioral changes in the person as well as affects brain functions. Drug addiction includes abusing alcohol, cocaine, heroin, opioid, painkillers, and nicotine, among others. Drugs like these help the person feel good about themselves and induce ‘dopamine’ or the happiness hormone. As they continue to use the drug, the brain starts to increase dopamine levels, and the person demands more.

Drug addiction has severe consequences. Some of the signs include anxiety, paranoia, increased heart rate, and red eyes. They are intoxicated and unable to display proper coordination and have difficulty in remembering things. A person who is addicted cannot resist using them and unable to function correctly without ingesting them. It causes damage to the brain, their personal and professional relationships. It affects mental cognition; they are unable to make proper decisions, cannot retain information, and make poor judgments. They tend to engage in reckless activities such as stealing or driving under the influence. They also make sure that there is a constant supply and are willing to pay a lot of money even if they are unable to afford it and tend to have erratic sleep patterns.

Drug addiction also causes a person to isolate themselves and have either intense or no food cravings. They stop taking care of their hygiene. Drug addiction affects a person’s speech and experience hallucinations. They are unable to converse and communicate properly; they speak fast and are hyperactive. Those addicted have extreme mood swings. They can go from feeling happy to feeling sad quickly and are incredibly secretive. They begin to lose interest in activities they once loved. Substance abusers also undergo withdrawal symptoms. Withdrawal symptoms refer to the symptoms that occur when they stop taking the drug. Some withdrawal symptoms include nausea, fatigue, and tremors. They stop and starting using again, an endless cycle that could be life-threatening. Drug addiction can be fatal if not treated timely. It can cause brain damage and seizures as well as overdose, heart diseases, respiratory problems, damage to the liver and kidneys, vomiting, lung diseases, and much more.

Though chronic, treatment is available for drug addiction. Many techniques are used, such as behavioral counseling, medication to treat the addiction, and providing treatment not just for substance abuse but also for many factors that accompany addiction such as stress, anxiety, and depression. Many devices have developed to overcome addiction. There are rehabilitation centers to help people. After treatment, there are numerous follow-ups to ensure that the cycle does not come back. The most important is having family and friends to support the effect. It will help them build confidence and come over their addiction.

The United Nations celebrates International Day against Drug Abuse and Illicit Trafficking on the 26th of June. Drug addiction impacts millions and needs to be treated carefully to prevent further harm to the individual and letting them live a better life. Drug addiction refers to taking substances that are harmful to our bodies. They cause changes to a person’s behavior as well. Many people take these drugs to feel happier and better about themselves. These dangerous substances make the brain produce a chemical that makes us happy, called dopamine. Producing large amounts of these causes the person to take the drug consistently.

Some of the drugs include alcohol, nicotine, and other unhealthy substances. Taking these substances can lead to many symptoms. These include unable to think correctly, cannot remember things, and unable to speak clearly. They steal and keep secrets from their close ones. Those addicted cannot sleep; they become happy and sad quickly. They stop doing the activities that they liked doing. They are not aware of their surroundings. Taking these dangerous substances can cause many health problems such as vomiting, unable to breathe, brain, and lung damage. It also affects their family, friends, and work.

Drug addiction is life-threatening. However, people with this addiction can be treated and helped with therapy, counseling, and taking medicines along with rehab centers. They do follow-ups to ensure that they never retake these drugs. They must have their family and friends to support them as they recover. 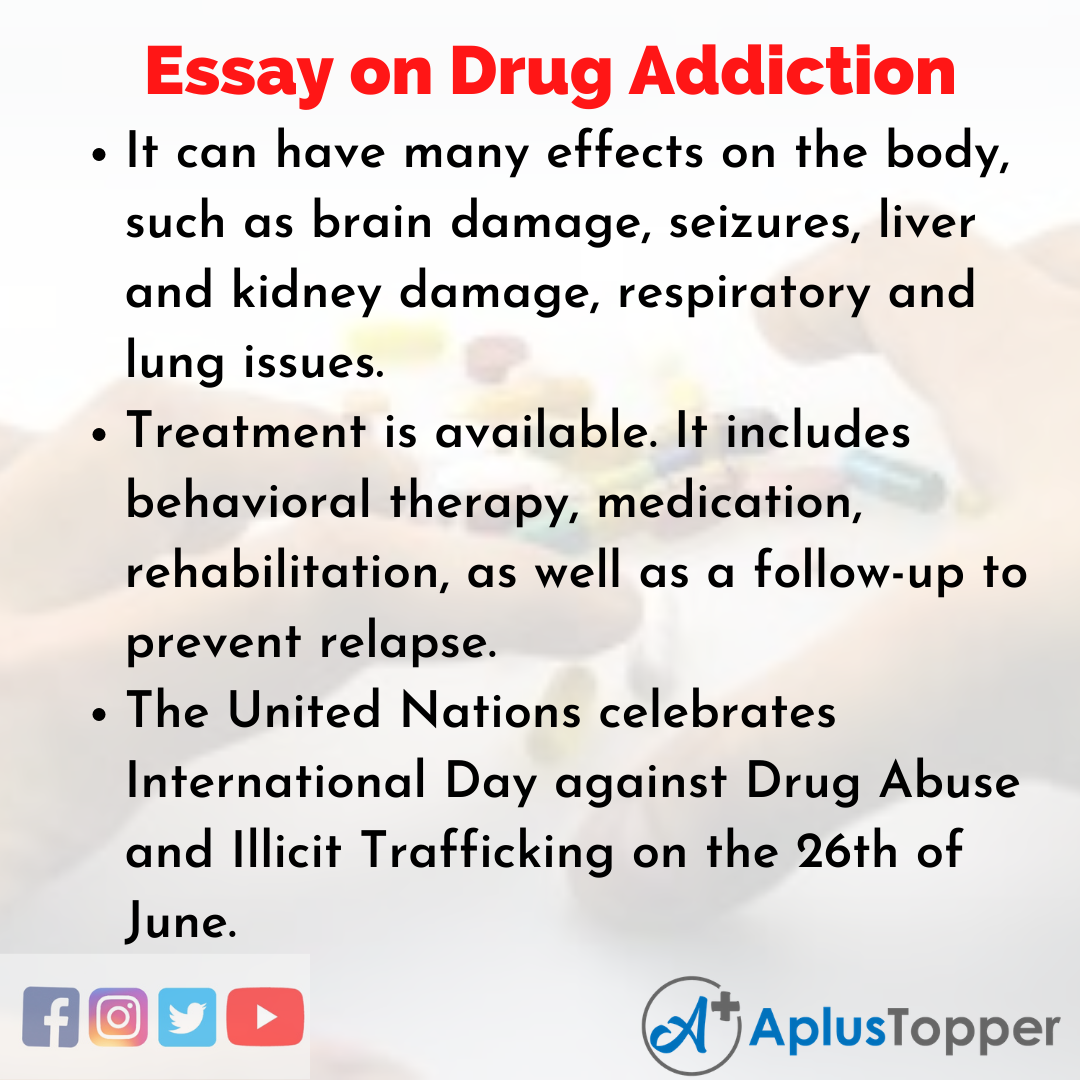 Question 1.
What is drug addiction?

Answer:
Drug addiction, also known as substance – use disorder, refers to the dangerous and excessive intake of legal and illegal drugs. This leads to many behavioral changes in the person as well as affects brain functions.

Question 2.
Why does drug addiction occur?

Answer:
People become addicted to these drugs because they want to feel happier. The drugs cause a chemical called dopamine, which induces happiness to be released. The brain starts to increase dopamine levels, and thus the person becomes addicted to the drug to match the increasing levels.

Question 3.
What is the difference between dependence and addiction?

Answer:
Dependence and addiction vary. While dependence is an intense craving for the drug by the body, addiction also refers to the changes in behavior and bodily functions due to repeated use of the drug, which has severe consequences.

Question 4.
Can we treat drug addiction?

Answer:
Yes, drug addiction can be treated. The various treatment methods are behavioral counseling, medication, and treatment of anxiety and depression. There are rehabilitation centers available. This is followed by a check-up to prevent relapse.