Essay on Disadvantage of Mobile Phones: In the modern world of science and technology, we all face different problems while using technologies. The mobile phone is a product of science which has become very important for us. Thus most of us use mobile phones like these are our friends, and that causes various problems. There are so many disadvantages of using mobile phones. Constant distraction, social disruption, never-ending workdays, ongoing expenses, cause of accidents, health problems, youth crimes, etc. are some of the major disadvantages of using mobile phones.

We are providing students with essay samples on long essay of 500 words and a short essay of 150 words on the topic Disadvantage Of Mobile Phones for reference.

Long Essay on Disadvantage of Mobile Phones 500 Words in English

Long Essay on Disadvantage of Mobile Phones is usually given to classes 7, 8, 9, and 10.

Mobile phones are one of the most important electronic gadgets that we need in our daily life. They appear to be almost indispensable communication tools in today’s world. But there are many disadvantages of mobile phones.

Many people have experienced being in an urgent business meeting and seeing someone’s mobile phone starts ringing with an incoming call. It is annoying and frustrating when you are in an important meeting. The same thing can occur in movie theatres, family gatherings, and even at weddings. As mobile phones are the main tool for communication in these days, they can interrupt at any time.

While people drive on roads, they also feel compelled to keep communicating because of this constant form of communication. And this is one of the main reason for road accidents. In India, at least 20 persons die every day due to road accidents.

Mobile phones leave negative impacts on personal contacts. We have seen many teenagers having dinner with their family members. But instead of joining in conversations with them, they keep themselves busy on their mobile phones scrolling through news feeds on social media applications. In this way, many people have lost their conversation skills which restrict them from interacting with other people. Using cell phones can cause distance in relationships too.

We still don’t know properly how dangerous mobile phone towers are. But there are some shreds of evidence which show some points toward tumours caused by cell phones. When we are looking for the disadvantages of mobile phones, the biggest disadvantage of using mobile phones is causing harm to one’s health.

Some negative impacts on a person’s health caused by mobile phones are DNA damage, sleeplessness, eye cancer, infertility, cardiac problems, chronic fatigue, etc. In a statistical survey, it is proven that more than 90% college students sleep with their mobile phones or next to them, 70% students said they couldn’t get enough sleep, and 50% said they feel tired during the day. Using mobile phones excessively can cause suppression in melatonin that alerts the brain and harm both quality and quantity of sleep.

There are so many people in this world who use mobiles phones as fashion. They upgrade the models of mobile phones they use regularly. Mobile phones are costly nowadays, and buying new models in a certain interval of time will make you spend too much money.

Mobile phones contain so many private photos and videos. Maintaining the privacy of these photos and videos have become harder these days as the mobile manufacturing companies and applications installed in the phones can go through your things in your phones. Hackers can easily hack your mobile, and the private things in your phone can be easily stolen.

Spam messages and calls also fall under the disadvantages of mobile phones. Many of us receive unsolicited sales calls or texts that are annoying and disruptive. Most of the times, these calls don’t involve real callers but are generated from a computer. Money-making scams are increasing day by day, and these scams often target the most vulnerable members of our society. 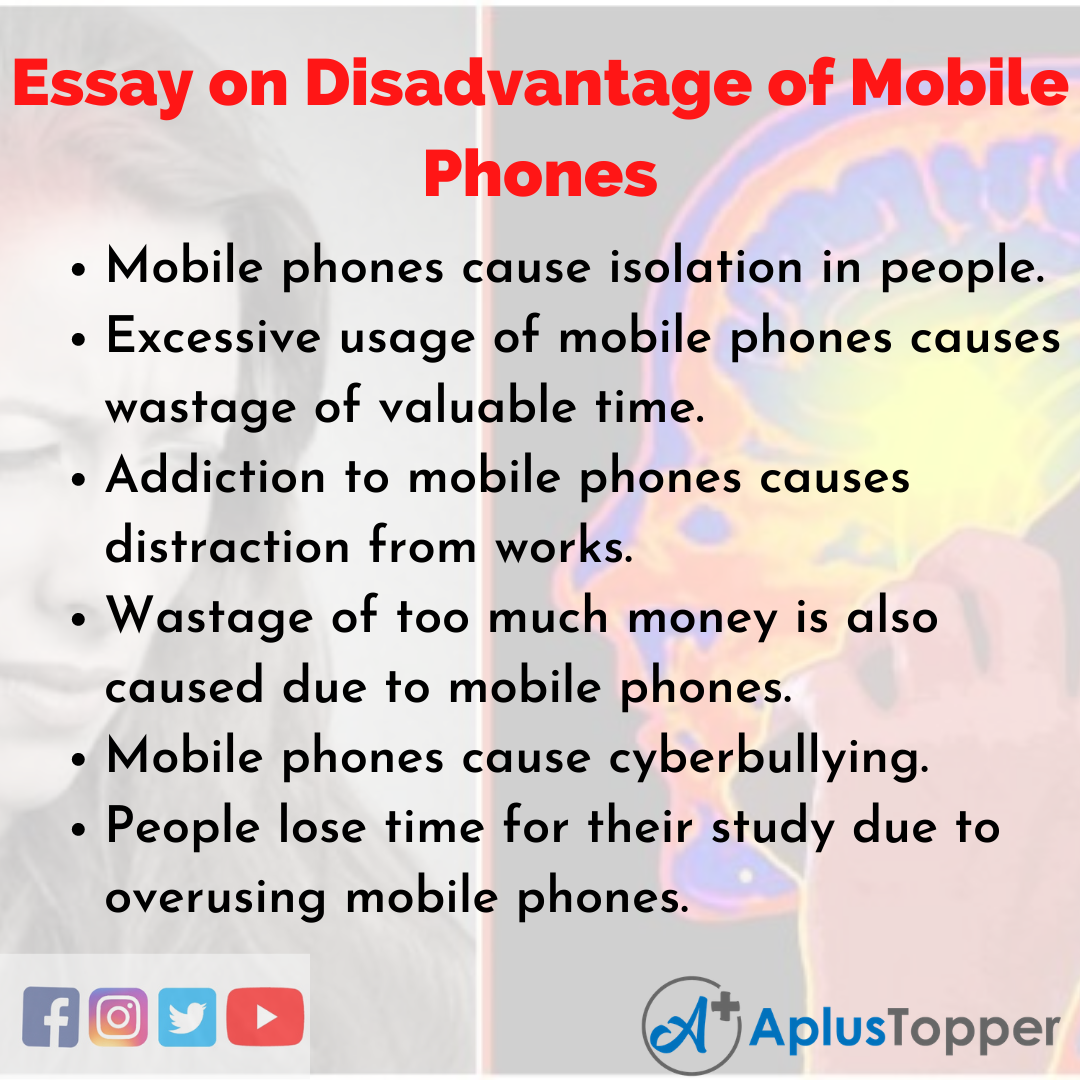 Short Essay on Disadvantage of Mobile Phones 150 Words in English

In today’s world of science and technology, mobile phones are essential for us. But over usage of any product is harmful. Similarly using mobile phones too much can cause negative impacts on us.

When we use mobile phones constantly, we get addicted to mobiles phones. Addiction to mobile phones can cause various mental disorders to human bodies. Isolation in the people is caused due to excessive usage of mobile phones.

Mobile phones are one of the main reasons behind the wastage of our valuable times. Mostly the students of school, colleges and teenagers are affected by wastage of time due to over usage of mobile phones. They spend too much time using mobile phones for playing video games, chatting, watching movies, and thus they waste their precious time.

Besides these disadvantages, mobile phones cause too many expenses, cyberbullying, loss in studies, distance from relatives and many more.

10 Lines on Disadvantage of Mobile Phones Essay in English 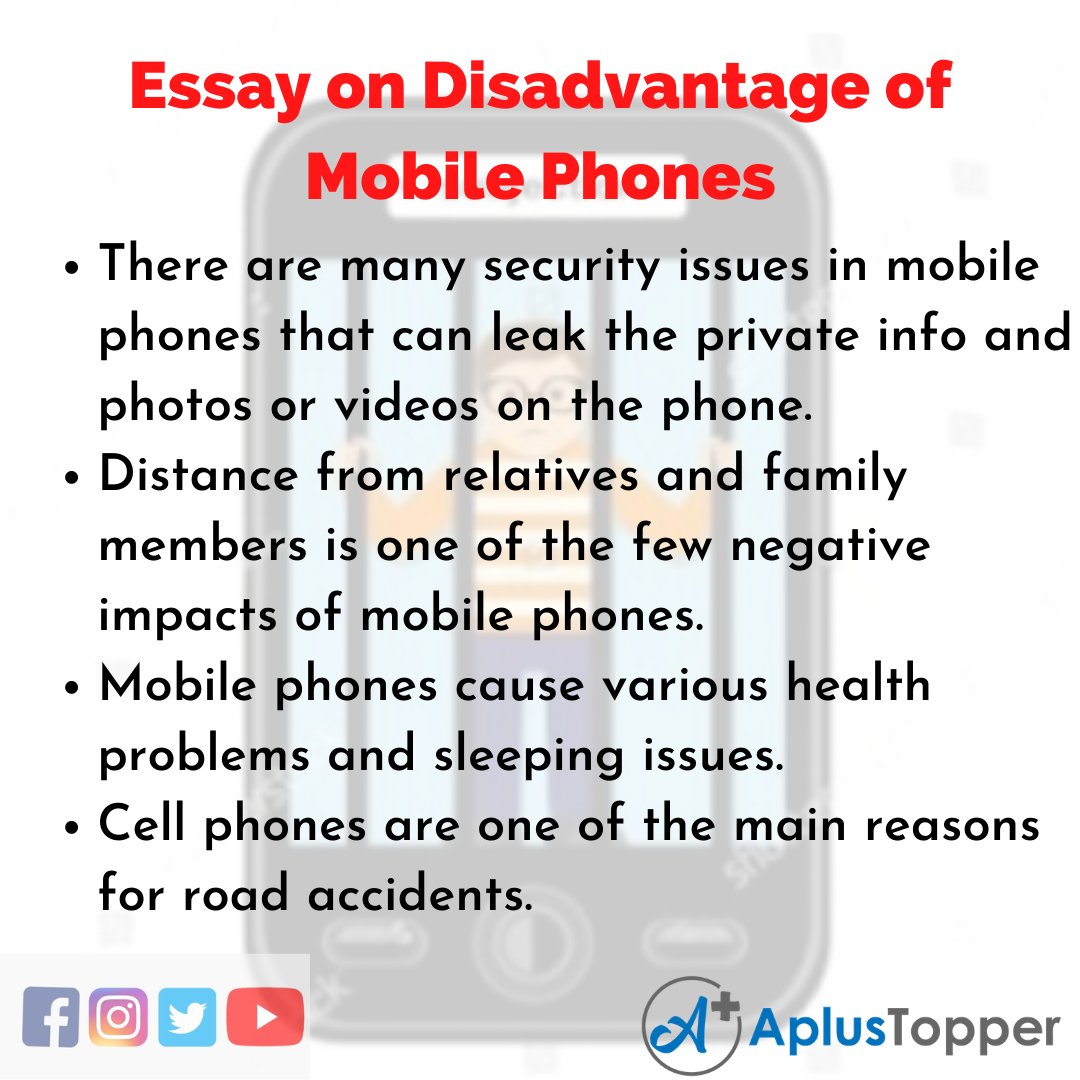 Question 1.
Name some health problems caused due to mobile phones.

Question 2.
How school and college students waste their valuable time?

Question 3.
What are spam messages or calls?

Answer:
Unsolicited messages or calls that are annoying and disruptive are called spam messages and calls.

Question 4.
Do mobile phones cause isolation in people?