Essay on Demonetisation: On 8th November 2016, the Prime Minister of India announced Demonetisation. It was decided the 500, and 1000 rupees notes would be banned, and in that place, new currency notes of 500 and 2000 INR will be introduced.

We are providing students with essay samples on a long essay of 500 words and a short essay of 150 words on the topic Demonetisation for reference.

The following step proved to be effective in taking a step ahead in the Indian economic condition. Demonetisation was useful in the entire country. This is because it reduced the chances of corruption taking place. To an extent, corruption and its effects came to an end. It can also be said that Demonetisation is the best thing that took place for corrupt people to feel scared of holding black money.

It is due to Demonetisation that the income tax department will have a record of the money that is deposited or changed. This can be called a huge advantage of Demonetisation. Due to this reason, no one can avoid paying tax, and the loan transaction will be under scrutiny. By this, the government will be able to take more public welfare measures.

There were some problems faced due to Demonetisation, such as cash shortage, and people of rural areas also faced difficulties exchanging the cash they had. The main problem is that the scarcity of money might lead to chaos. Due to Demonetisation, the ATMs were also out of cash for some days. Rural people also faced problems because the agricultural sector entirely relies on cash. Another problem created in rural areas was the lack of financial literacy to handle the following problem. But, if we compare the pros and cons, we can find more pros in the situation, and the results of Demonetisation were also effective for the country.

The following also somehow led to cashless India, in which people came across faster internet connections, and the cashless system was also introduced in the rural and agricultural sectors. This also proved beneficial because the people in rural areas who are engaged in agriculture also got some financial literacy and ideas about handling the cashless system. 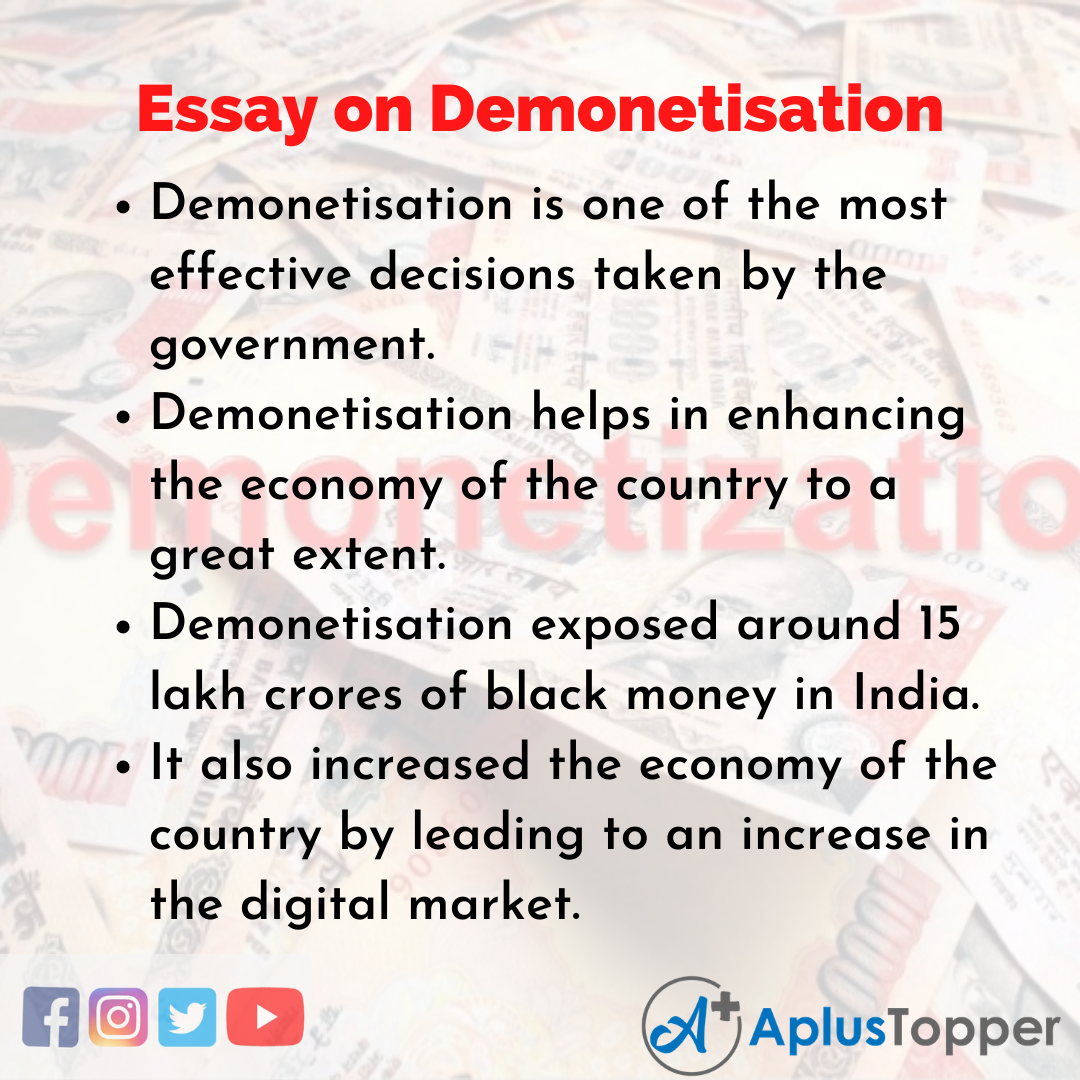 In simple words, Demonetisation is the situation where the government legally bans the notes and coins of a certain denomination. Mostly the currencies that are banned are replaced by new currencies. Demonetisation legally targets the industrialists, politicians, and people who don’t disclose their business. Demonetisation aims to ban illegal activities such as corruption.

Demonetisation focuses on the long term effects on the country’s economy rather than its short-term effects. The people’s problems in rural areas led to the betterment of those people by making the opportunities reach near them and providing them with proper financial knowledge. This results in the enhancement of the nation’s economy by the removal of fake currencies.

10 Lines on Demonetisation in English 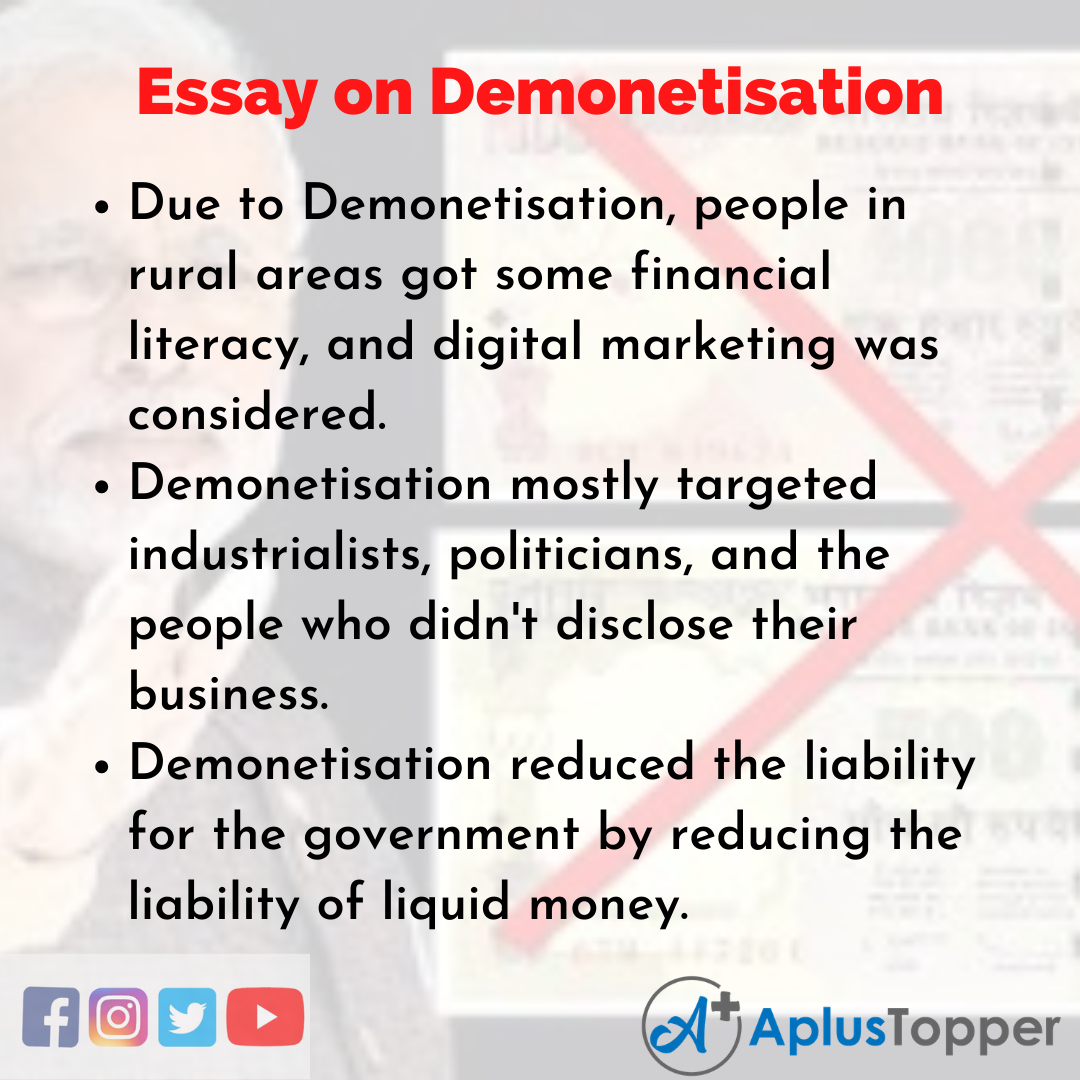 Question 1.
Who are the people most targeted during Demonetisation?

Answer:
The people mostly targeted during Demonetisation are politicians, industrialists, and the people who don’t disclose their business.

Question 2.
Why did people of rural areas face problems during Demonetisation?

Answer:
The people of rural areas faced problems during Demonetisation because the agricultural sector is based on cash. They also lacked financial literacy.

Question 3.
State one way in which it helped in the growth of the Indian economy?

Answer:
Demonetisation increased the number of bank deposits, which allowed the government to keep a record of the cash which was deposited in banks. By this, growth took place in the Indian economy.