Essay on Delhi: New Delhi is India’s capital and is one of the most widely known cities of the country. It is mostly famous for its rich and unique heritage and culture. The town is growing continuously over the years. There are several unique and beautiful monuments present in Delhi.

Delhi is considered as one of the most important historical places. The diversity in the religion of the people is visible across the city along with the influence of the Mughal, the British, and India on its culture.

We are providing students with essay samples on long essay of 500 words and a short essay of 150 words on the topic Delhi for reference.

Delhi city is filled with several rare museums, temples, monuments, tombs, forts, mausoleums, fortress, and so on. This city has been ruled and owned by various empires, invaders, and kingdoms in the ancient period.

Besides, most of the widely popular movements of India took place in Delhi. It also has been termed as the capital by the ancient Mughal emperors and the Hindu Kingdom.

Delhi is considered to be highly famous across the state and also amongst foreign visitors. Due to its incredibly vast culture and interesting historical background. This city has also been destroyed and built again for around seven times.

It has been termed as the capital since ancient times or for over a thousand years. Besides, it was also termed as the capital of the state during the rule of the Muslim Kings. For instance, the Delhi of the current time was established by Shah Jahan. The palace of the city was the red fort back then.

While Delhi was under the rule of Altumash, and Qutubudin-Aibak, it was located nearer to the Mehrauli and Qutub Minar.

Whereas, during the rule of Lodi dynasty, the locations closer to the Lodi gardens and the tombs became their official headquarters. Similarly, every Muslim king decided to take up the locations for themselves according to their needs or choices.

There used to be a big wall surrounding Delhi. Thus, the current Delhi represents the history of India filled with glory and beauty. There is numerous building of the past, along with rare monuments. One of the most widely known monument is Humayun’s tomb. It is one of the most royal art pieces, made by his wife.

New Delhi is an incredible part of the entire state. This city is alluring and has been built perfectly. It comprises of many elegant gardens and parks, situated away from the busy part of the city. There are numerous ancient palaces, and houses of Indian kings, several central government offices, Rashtrapati Bhavan, and so on located in New Delhi.

The Connaught place is termed as the most selected shopping arcades/cloisters across the city. This centre for shopping is filled with activity, mostly in evenings, amid the sparkling lights, neon lights, and colourful and bright fountains.

Thus, this city is very important due to its vast background and also comprises of several central government offices. However, it also represents the modern periods, the destroyed monuments, and the Mughal art and architecture.

Therefore, this city holds high value in the eyes of the people. It is very appealing and interesting to learn more regarding the past of Delhi and its rich and large background. Besides, the travelling system in Delhi is very easy. The Metros can be used to travel across the city with cheap cost. These are also some reasons why Delhi is one of the most widely selected travel locations in India for numerous travellers. 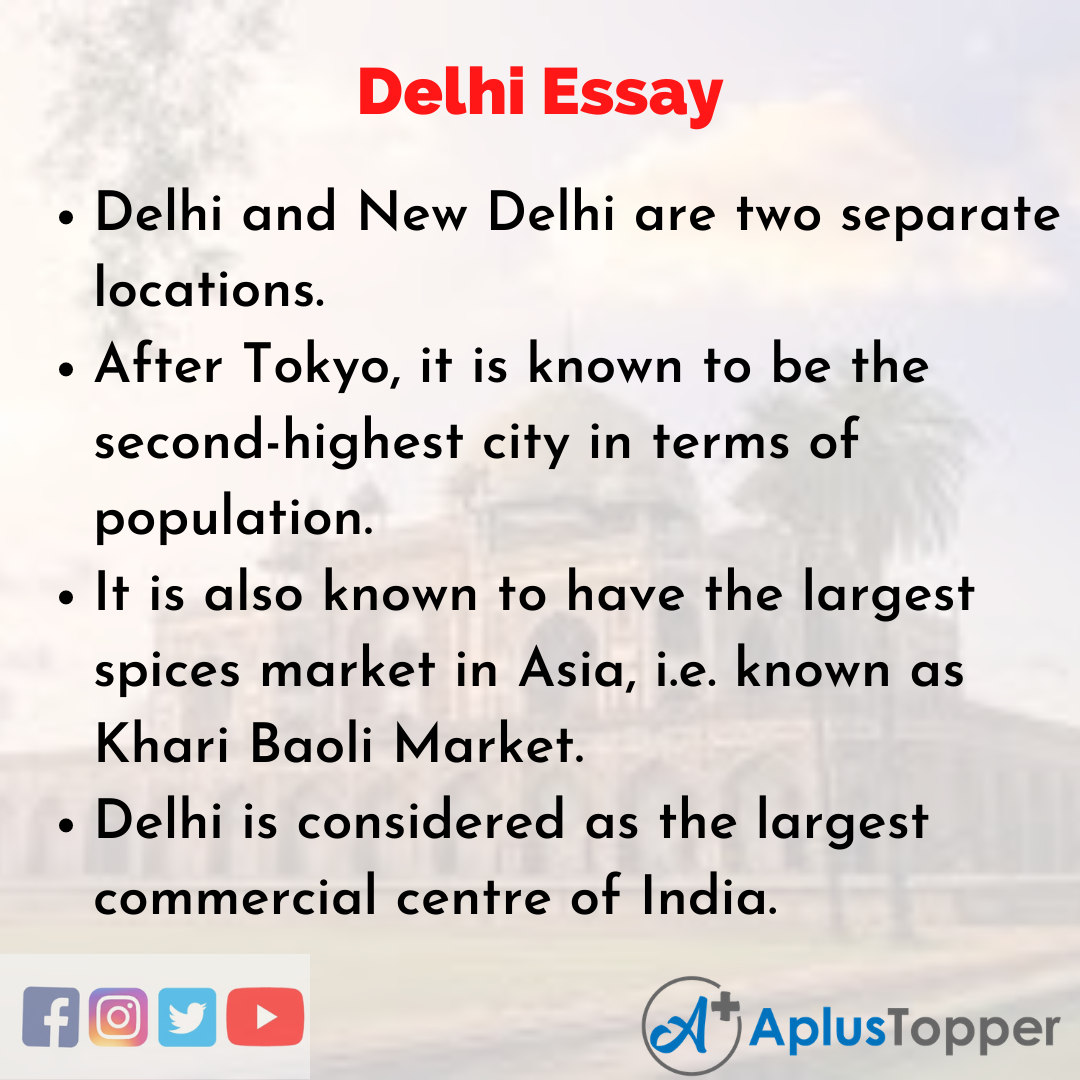 Delhi is a large and sophisticated city. This city comprises of several elegant gardens away and frees from the pollutions. It is located near the river Jamuna. The people living here belong to several different cultures and religions.

It is separated into Old and New Delhi. It is popular for the following Jama Masjid, Gurudwara, Birla Temple, Sis Ganj, and so on. Including the famous centres like Sardar Bazar, Chandni Chowk, Jamal Khan Market, and so on.

It also comprises of a lot of libraries, and art galleries. There are few popular and widely recognized hospitals in Delhi like Lohia Hospital, Mulchand Hospital, Sir Ganga Ram Hospital, and so on.

10 Lines on Delhi Essay in English

1. Delhi and New Delhi are two separate locations.
2. After Tokyo, it is known to be the second-highest city in terms of population.
3. It is also known to have the largest spices market in Asia, i.e. known as Khari Baoli Market.
4. Delhi is considered as the largest commercial centre of India.
5. The public transport and the Delhi transport corporation make use of CNG or compressed natural gas.
6. Delhi has a unique international museum of Toilets.
7. Delhi had a total of fourteen gates. Out of 14, five of them are still intact.
8. Indira Gandhi International Airport is well known throughout South Asia for being the busiest airport.
9. Delhi is considered one of the greenest city in the world as 20% of its area is covered with forests.
10. Delhi is considered leading registration place for automobiles in India. 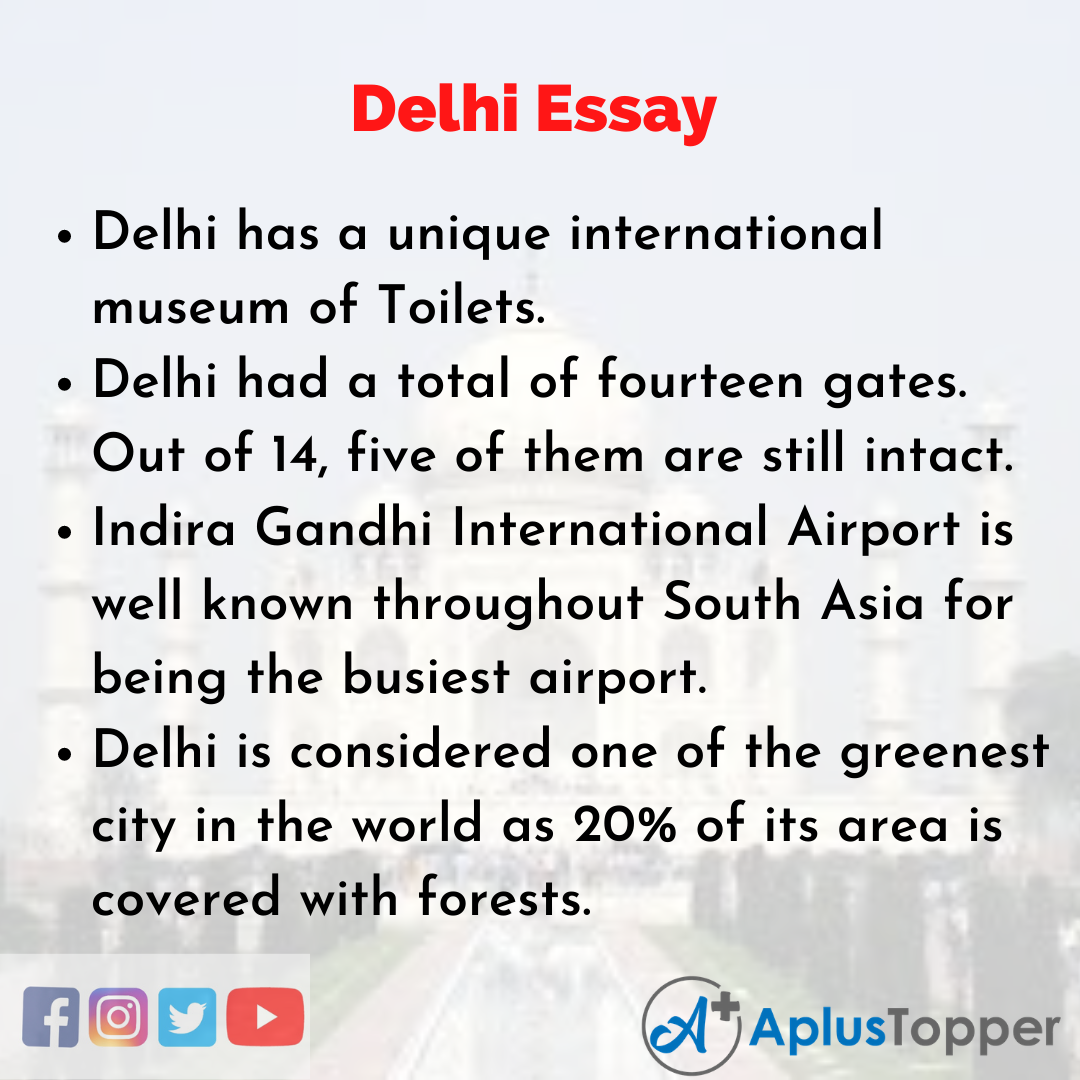 Question 1.
When is it considered best to visit Delhi?

Answer:
February, March, October, and November are stated to be some of the best months to visit Delhi. In these months the temperature normally falls between 20 to 25 degree Celsius.

Question 3.
What kind of festivals and fairs are available in Delhi?

Answer:
In October, Dussehra is celebrated in Delhi, right after it comes Diwali. In January, Lohri is also celebrated. There are many more festivals included holi, republic day, etc.

Question 4.
Are the hotels in Delhi costly?

Answer:
Several portals provide discounts for many hotel rooms. Therefore, it is best to make a comparison to get the best offer before booking.