Essay on Conservation of Natural Resources: Nature is not just about us human beings and our fellow companions that are plants and animals. Nature is much more than living beings. Nature constitutes of water, air, soil, fossil fuels, forests, hills, mountains, sunlight and much more. And without any of the mentioned above, the entire domino on which our planet stands will start falling apart.

Long Essay on Conservation of Natural Resources in English 600 Words

The rapid industrialisation, urbanisation, building of skyscrapers and highways, economic boom, technological revolution and much more are all the result of constant hunger that man has for progress and development of his surroundings. While all these progress in mad-made things has, to a certain extent, improved our standard of living, but to the most extent has caused harm, some directly and some in indirect ways.

The development agendas that we see around us, whether its the fast-moving cars or bullet trains or talking robots or large football stadiums, all come at a cost. And this cost is reflected in our depleting natural resources.

How to Conserve Natural Resources? 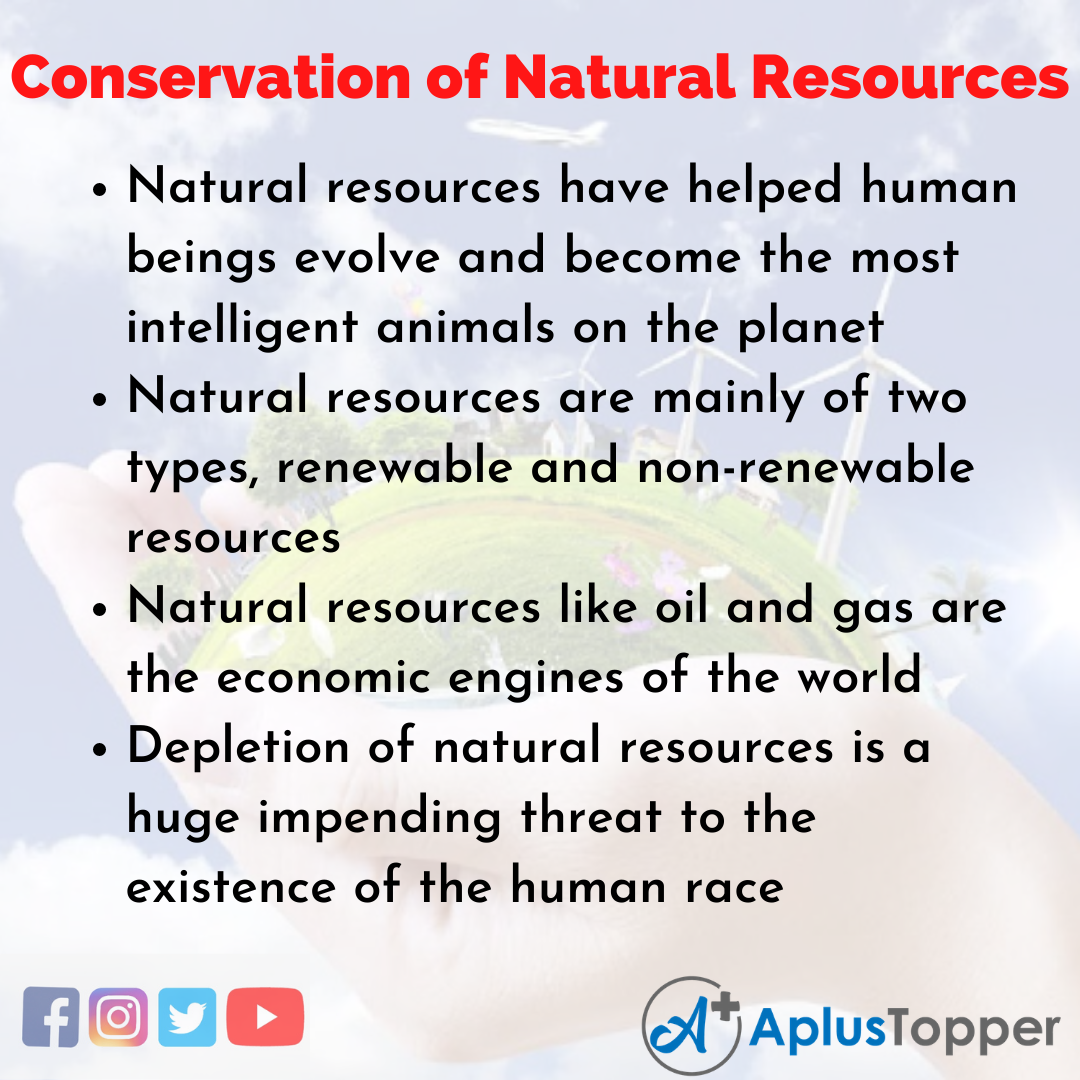 Short Essay on Conservation of Natural Resources 200 Words in English

We have provided a 150 to 200 words essay on conservation of natural resources which can be used by school students and children for their assignments and projects.

Man has been using the blessings of nature in the form of natural resources for his survival and development. Right from the discovery of fire and the wheel to the 21st venture inventions of robots and automation, the use of natural resources has been pivotal for the evolving mankind. But his progress and development have a dark side to it which will lead us to a scary and different future. The exploitation of natural gas, oil, coal, water and forests are at its peak and no governmental organisations and business houses are taking the effects of depleting natural resources seriously.

Depletion of natural resources can lead to global warming, climate change, alteration in agricultural cycles, flood and earthquakes. All these will surely lead to food shortages and we will not be able to feed our ever-increasing population. Disturbances in the food cycle can lead us to famine and unrest among the public, which will then lead to civil wars and chaos.

All these, because the man simply hasn’t learned his place on the planet. We have to stop being selfish and learn to live and let live with nature. This is required both for saving our ecosystem and the very survival of mankind.

10 Lines on Essay on Conservation of Natural Resources 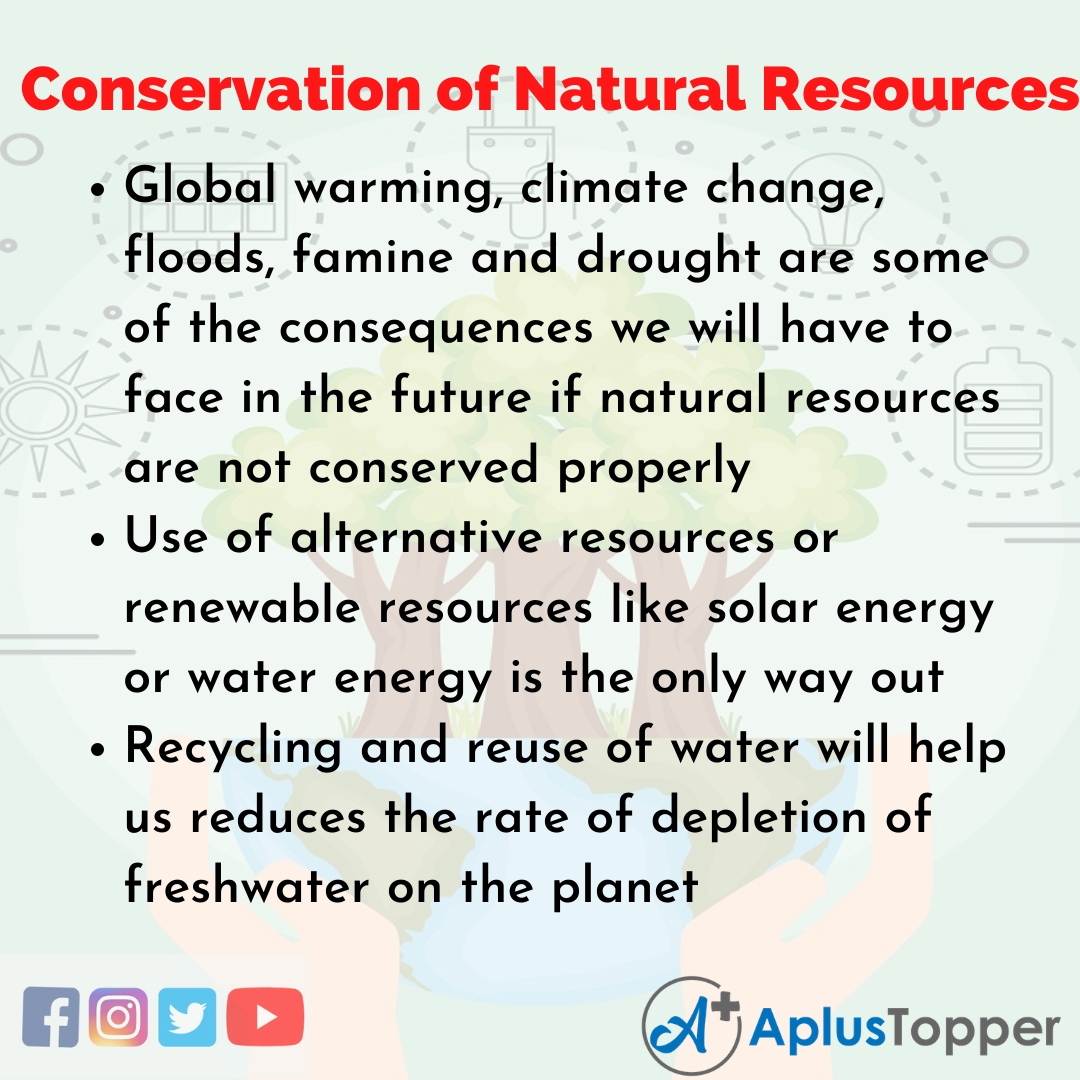 FAQ’s on Essay on Conservation of Natural Resources

Question 1.
What are the types of natural recourses?

Question 2.
How to conserve natural resources?

Answer:
Using the modern methods of living and changing our everyday habits like travelling, cooking and bathing will help in conserving our natural resources. The businesses also should build sustainable models and innovate to adapt to the new changes

Question 3.
Which country has the most abundant reserves natural resources?

Answer:
China has the most natural resources in the world. They have millions of tons of reserves of coal, lead, gold, tungsten etc which are required in industrial revolutions. Saudi Arabia has the highest reserve of oil and gas in the world

Question 4.
What will happen if natural resources continue to be depleted?

Answer:
Non-renewable resources will take hundreds of years to get replenished. With this rate of depletion, there will be no more oil or gas or coal for our future generation to use