Essay on Child Trafficking: child trafficking is a serious issue that is prevalent in our country. It is because of the number of people that are under the lines of poverty and it is usually this demographic that is subject to child trafficking. The majority of the country’s trafficking problem is internal in the sense that it is usually the most disadvantaged people of the countries that face it, for example, the Dalits, religious minorities, tribal community members, and girls from different minority groups as well. Due to poor socio-economic situations, parents are lured and taken advantage of by people and thereby leaving their children into such trafficking rings. The parents from these poor backgrounds assume that the children are going to live in better conditions but in reality, the children are kidnapped and taken advantage of.

We provide children and students with essay samples on a long essay of 500 words and a short essay of 150 words on the topic “Child Trafficking” for reference. 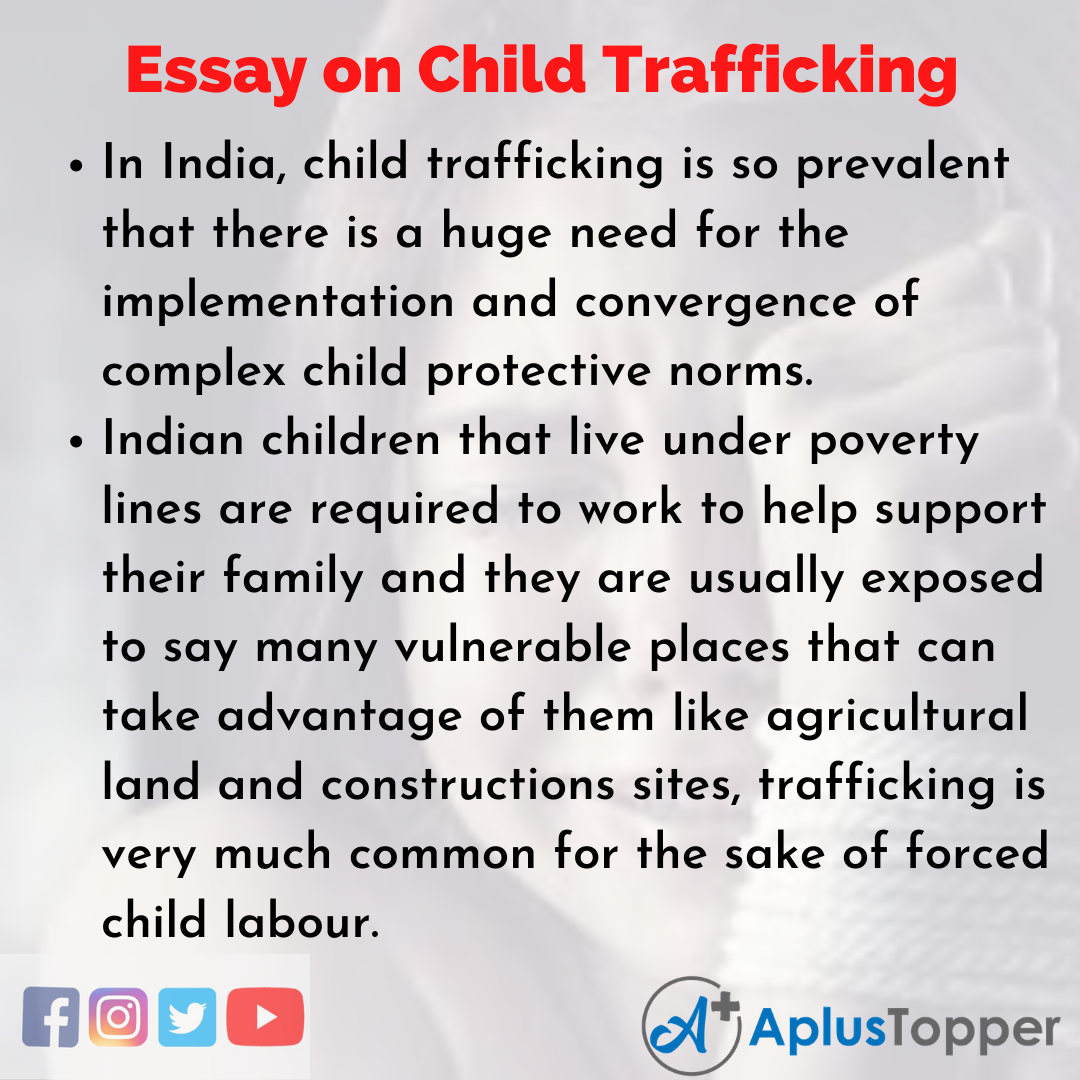 In India, child trafficking is so prevalent that there is a huge need for the implementation and convergence of complex child protective norms. Indian children that live under poverty lines are required to work to help support their family and they are usually exposed to say many vulnerable places that can take advantage of them like agricultural land and constructions sites, trafficking is very much common for the sake of forced child labour.

We constantly hear how little girls of age below puberty are victims of the sex trade and are sold overseas where they have no one to rescue to them. Children are so subject to work in various industries that are highly dangerous and toxic environments.it is of grave importance that we educate parents and also set up institutions to help children to get out of such rings or not be subject to them. By keeping children informed and also making sure parents report cases to the police will help so much. 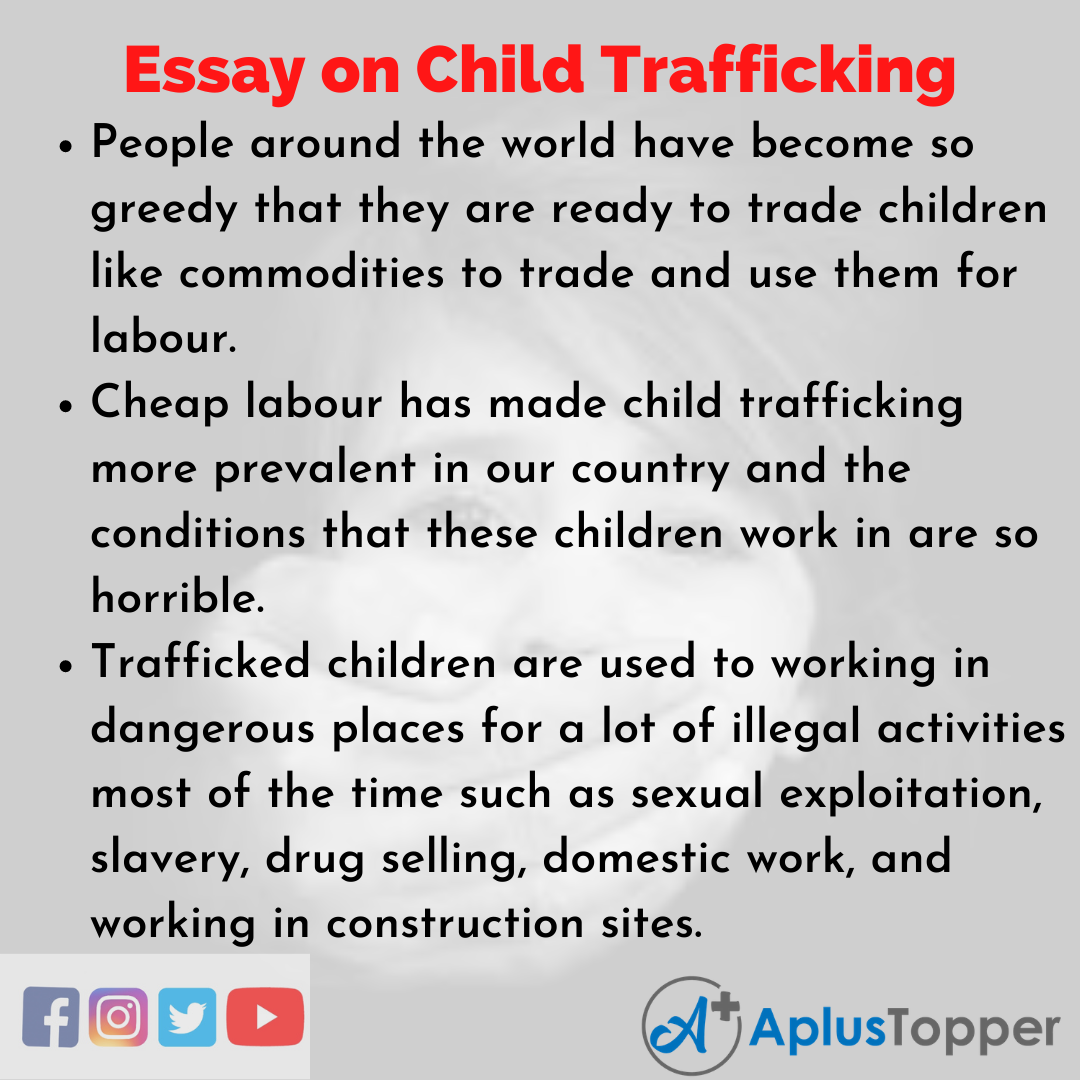 People around the world have become so greedy that they are ready to trade children like commodities to trade and use them for labour. Cheap labour has made child trafficking more prevalent in our country and the conditions that these children work in are so horrible. Trafficked children are used to working in dangerous places for a lot of illegal activities most of the time such as sexual exploitation, slavery, drug selling, domestic work, and working in construction sites.

Children from the marginalized and poor socio-economic background that are often trafficked into work. Most of the time the parents are betrayed because of their extreme conditions thus either selling them or sending them to have a better livelihood. Parents are usually one of the main causes of trafficking as their poor means force them to send their children in hopes of a better life. The problem is that children don’t understand what they are going through and are suddenly fallen into that trap. Traffickers promise the parents with minimum wage and shelter to the children but by tricking them they take the children away. Little girls are usually the most subject to the sex trade and this is the most unforgiving practice that parents are usually unaware of or they sell their children to these traffickers.

It is very important to spread awareness about this everywhere so that children and parents can make better-informed choices. We must understand that children have a lot to live for and they shouldn’t be put in such conditions. When we compare how normal middle-class families live a normal life compared to these children who are trafficked, we can see that massive difference in their livelihoods and see the pure unfairness at hand. We must try our best to give these children the life they deserve by bringing out more campaigns and making more people aware of what is going on.

The main causes for child trafficking are unemployment, education, poverty, and awareness. Most parents also sell their own children to clear out their debts and live a better life from their poverty-stricken life. These children are often forced to do many illegal activities and are constantly exploited. Some of these children are also taken for the purpose of organ trafficking purposes, a lot of the time it is little girls that are exploited for sexual activities. These children are made to live in the worst of the worst conditions known to mankind.

The poor implementation of laws is the main reason for child trafficking. This isn’t just an issue in India but worldwide and this needs serious attention. The worst form of child trafficking is child sex and it is an ongoing severe issue. The victims of this are usually forced to work in brothels, strip clubs, and bars. The worst of these situations is when they are sold off to work in private homes and are a slave to the owners unless they are saved by somebody or find a way to escape. Children who are victims of trafficking experience various emotional, social, mental, and physical effects and these usually stay for a long time. Most of the children are victims of anxiety, depression, psychiatric disorders, trauma, and some of the sex victims contract different STDs. later in life, a lot of these children develop tendencies to become drug addicted or become alcoholics.

children from poor socio-economic and marginalized backgrounds that are often trafficked into work. Most of the days the parents are betrayed due to their extreme conditions thus either selling them or sending them to possess a far better livelihood. Parents are usually one the most causes for trafficking as their poor means force them to send their children in hopes for a far better life. the matter is that children don’t understand what they’re browsing and are suddenly fallen into that trap. Traffickers promise the oldsters with minimum wage and shelter to the youngsters but by tricking them they take the youngsters away. Little girls are usually the foremost subject to the sex trade and this is often the foremost unforgiving practice that oldsters are usually unaware of or they sell their children to those traffickers.

A lot of the time primary pull factors are drug issues and cash. The push factors are unemployment, family requirements and mainly everything revolves around poverty. A lot of these poverty-stricken families are trapped in these high wages of child trafficking. These children aren’t just traded within the country but to different parts of the world. Most of these children are given the worst treatment known to mankind and are forced to beg and steal. A lot of the time unlawful organ transplantation also happens. The trafficked children are sexually and physically abused throughout their life till they are deemed not worthy or not valued anymore.

A lot of the cases are when children are forcefully kidnapped and then deported to disgusting environments. These environments can have a huge impact on the growth and overall development of the child. Severe laws need to be put in place so that children have at least a chance of being saved from child trafficking. On a global level, it is currently increasing at an alarming rate. There are many factors that give it such a rise. It is important that strict laws be implemented especially in developing nations so that these children living under the poverty line have a chance to have a better life.