Essay on Casteism in India: India is a country with many caste and religion. You can find people of a different religion living together and enjoy different festivals together. However, people are diversified on the basis of casteism. Casteism means discrimination based on the caste of the people. It is responsible for many problems that occur in the country and also it stops the country from developing. Casteism is considered a great evil in India that needs to be removed from the country. We will know more about casteism in this essay.

Long Essay on Casteism in India 500 Words in English

India is a land of different religions and many different caste systems. You can find people with different religions living together and participating in every festival even in smaller areas of the country. India is one of the most diverse countries in the world. It is seen that in urban areas the cases of casteism is not as rigid as compared in rural areas.

Casteism refers to discrimination among people based on their caste. The caste system of India, specifically Hindus are divided into four major categories, that is Kshatriyas, Brahmins, Vaishyas and the Shudras. The Brahmins are the priests and the teachers, Kshatriyas are the rulers/ warriors, Vaishyas are farmers/ traders and merchants whereas the Shudras are labourers. In the native language of India, Hindi, caste is called Jaati. There is another jaati that was often degraded in ancient times, known as Dalits, as they were outcastes who worked as servants until the Indian constitution made new rules.

India is famous all over the world for its diversity and loving nature among different religions, however, the caste system can be a big element blocking the country from developing. India is developing day by day but in some areas of India, intercaste marriages and equality are still not present and these areas are still following old rituals and mindsets which hinder the growth of the society.

In ancient times, casteism led to untouchability where people of higher caste were not allowed to touch people belonging to a lower caste. For example, the most upper-class caste, Brahmin, could only speak to directly interact which people who are of the same caste. Also, the water walls and food could not be shared and people from different castes lived in segregated colonies. Also, a person could marry someone from the same caste.

Inter caste marriages are considered taboo in some areas to date. People in urban areas have broadened their thinking and accepted the fact that inter-caste marriages are not taboo or crime whereas people in rural areas still consider inter-caste marriage as a crime which leads to the rise in honour killing. The panchayat and police also support this mindset of people that’s why rural areas are not being able to develop their thinking.

Casteism in India is a great evil that needs to be thrown out of the country so that people can live with each other happily and enjoy each other’s growth and success. If this evil is thrown out of the country, India would be able to develop even more and deserving candidates will be able to get the job. The reservation system would be uplifted and deserving students will get admission to the colleges.

So, as responsible citizens of the country, we should come forward and fight this evil together. If we stand together then there will be no casteism present in the country and everyone will be treated with equality. 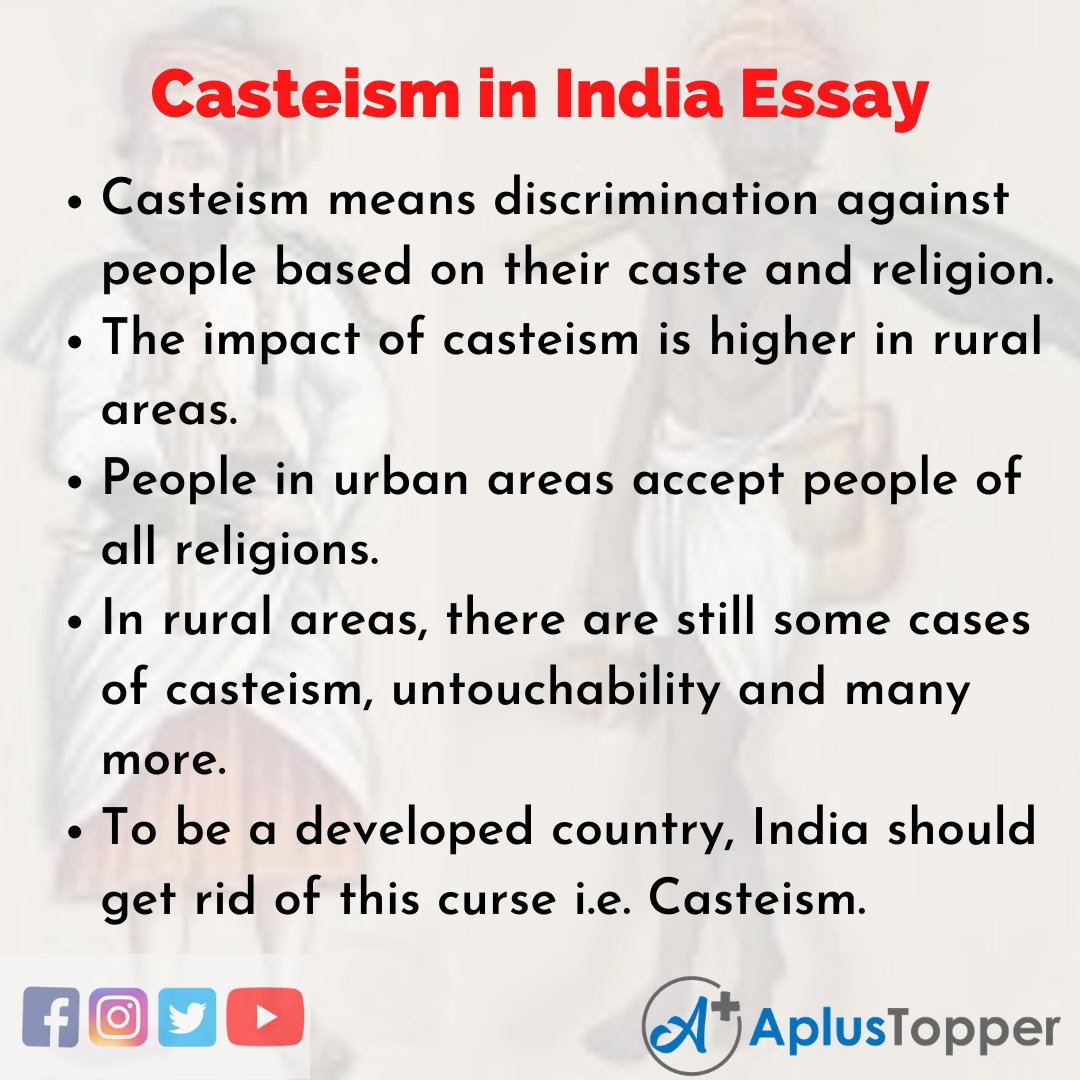 Short Essay on Casteism in India 150 words in English

You can find people from different religions and castes, speaking different languages in India. Here, all the people live in harmony and peace and participate in other’s happiness and festivals. India is one of the most diverse countries in the world but because of so many caste and religion, it is seen that there are many cases of casteism also.

Casteism means discrimination against people based on their caste and religion. In many cases, it is seen that people won’t talk and won’t even touch someone who is of a lower caste. This kind of discrimination stops India from becoming developed. The cases of casteism are more in rural areas as compared to urban areas. However, this taboo is now being abolished due to new rules and regulations by the Indian constitution and people from lower caste getting equal opportunities to complete their education and get promoted to higher posts in government jobs.

10 Lines on Casteism in India Essay in English FAQ’s on Casteism in India Essay

Question 1.
What are the consequences of Casteism?

Answer:
Casteism leads to a rise in crimes like honour killing, untouchable and dowry system.

Question 2.
Which areas have more cases of Casteism?

Answer:
Rural areas like villages and agricultural areas are still suffering from the taboo of the caste system.

Question 3.
What are the different castes in Hinduism?