Essay on Brain Drain: The concept of Brain Drain is a matter of gradual concern for any nation. It is primarily defined as the migration and taking off of individuals from their homeland to other countries. Not only does it result in the loss of a nation’s creative genius, but the brain drain also brings about a potential economic decline in the nation’s scenario.

Brain Drain issues a vital threat before a country. The topic of Brain Drain is an essential subject for compositions among students. They are often asked to write briefly or elaborately on the matter.

Brain Drain in a country occurs when the country’s potent citizens who possess creativity and genius depart for other better countries abroad to get better working opportunities. This migration and departure of skilled individuals are known as Brain Drain. Brain Drain can be a vital loss to a nation because it loses its share of knowledgeable people, who could have otherwise contributed significantly to the nation’s economic and scientific achievements.

The amount of brain drain in India is enormous. There can be several factors that contribute to such a scenario. Firstly, India lacks in providing job opportunities. The rate of unemployment in the country is very high. As a result of this, bright students, after having completed their higher studies, aim to move abroad to avail better jobs and career opportunities.

Furthermore, technological advancement in India is miserable; the country lacks modern scientific equipment. Such a miserable condition does not provide a perfect work environment. People tend to move to other advanced countries.

Migrating abroad to first world countries not only allows one to have better career prospects, but they can also avail of a better standard of living, a better lifestyle, and better living facilities. They feel that their talent is being recognized and acknowledged deservedly abroad. India cannot offer such stability to its citizens. Hence, they move out.

If the brain drain is left open to happen without any restrictions, India would be in shambles. If all the masterminds in the country go for other countries to avail of better working conditions, there would be no talent left. Without expertise, skilled people, and intelligent individuals, the sectors like law, engineering, medical, the administration would solidify forever. They would not advance.

The only way to restrict brain drain is to better than living standards in the country itself. The employment rate should be alleviated – more number of jobs should be provided. More number of positions should open for hire. All the sectors in the country should be modernized; scientific and technological advancement should be in facilitation. This way, the potential talented people in the country will feel validated and wanted. 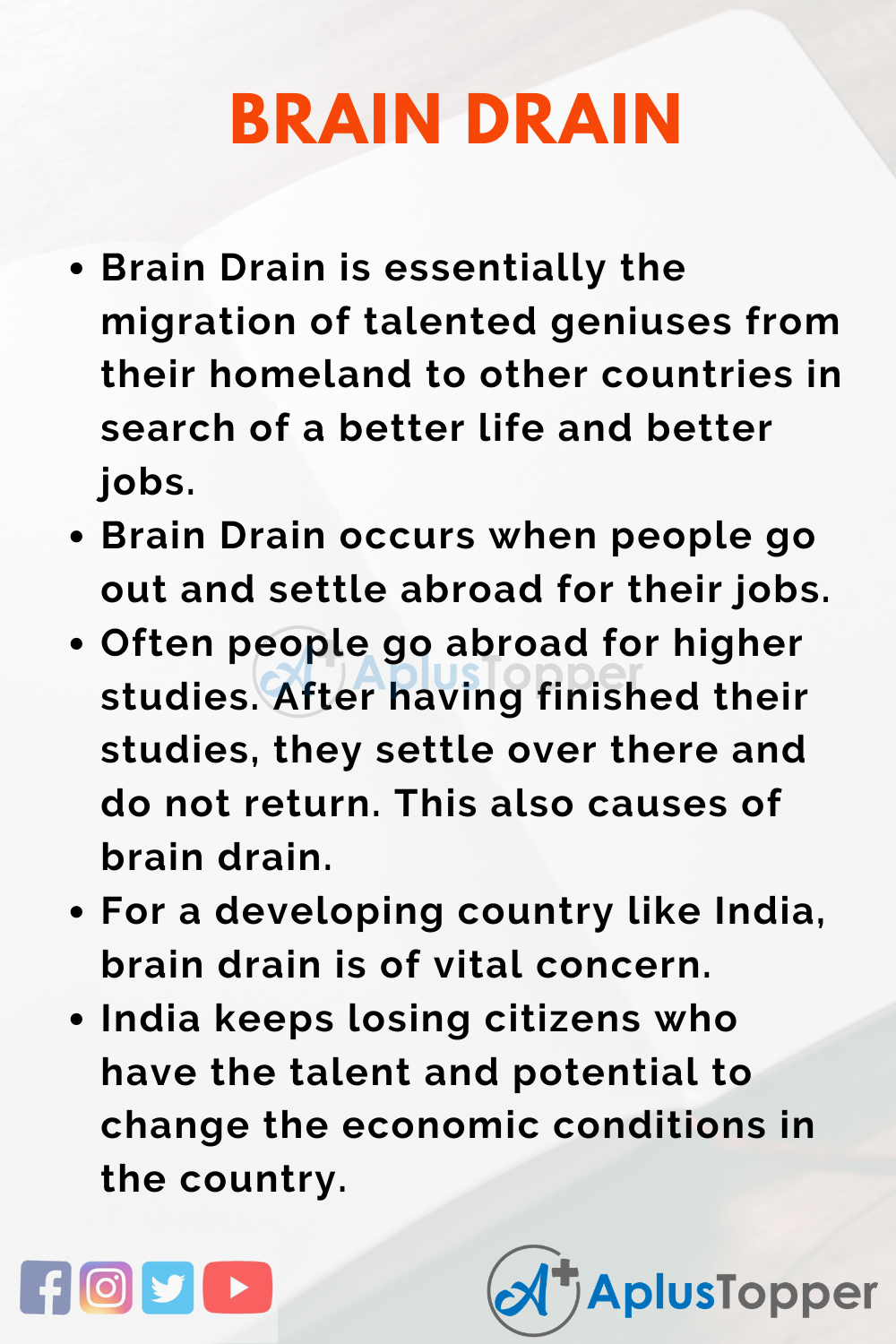 Brain Drain implies the loss of a country in its share of skilled and genius people. These talented people migrate to other countries, which promise them better career prospects. Throughout the last few years, the matter of Brain Drain has been of a growing concern for India. Due to its inability to provide better working conditions to its citizens, India is being drained of its potential brainpower. India is losing its considerable rightful share of laborers, workers, artists, doctors, engineers, etc. because it does not have adequate job opportunities. The countries abroad act as magnets to skilled people, because they promise them a better life, and far better work offers. we will soonly update Essay on Brain Drain in Hindi, Punjabi. 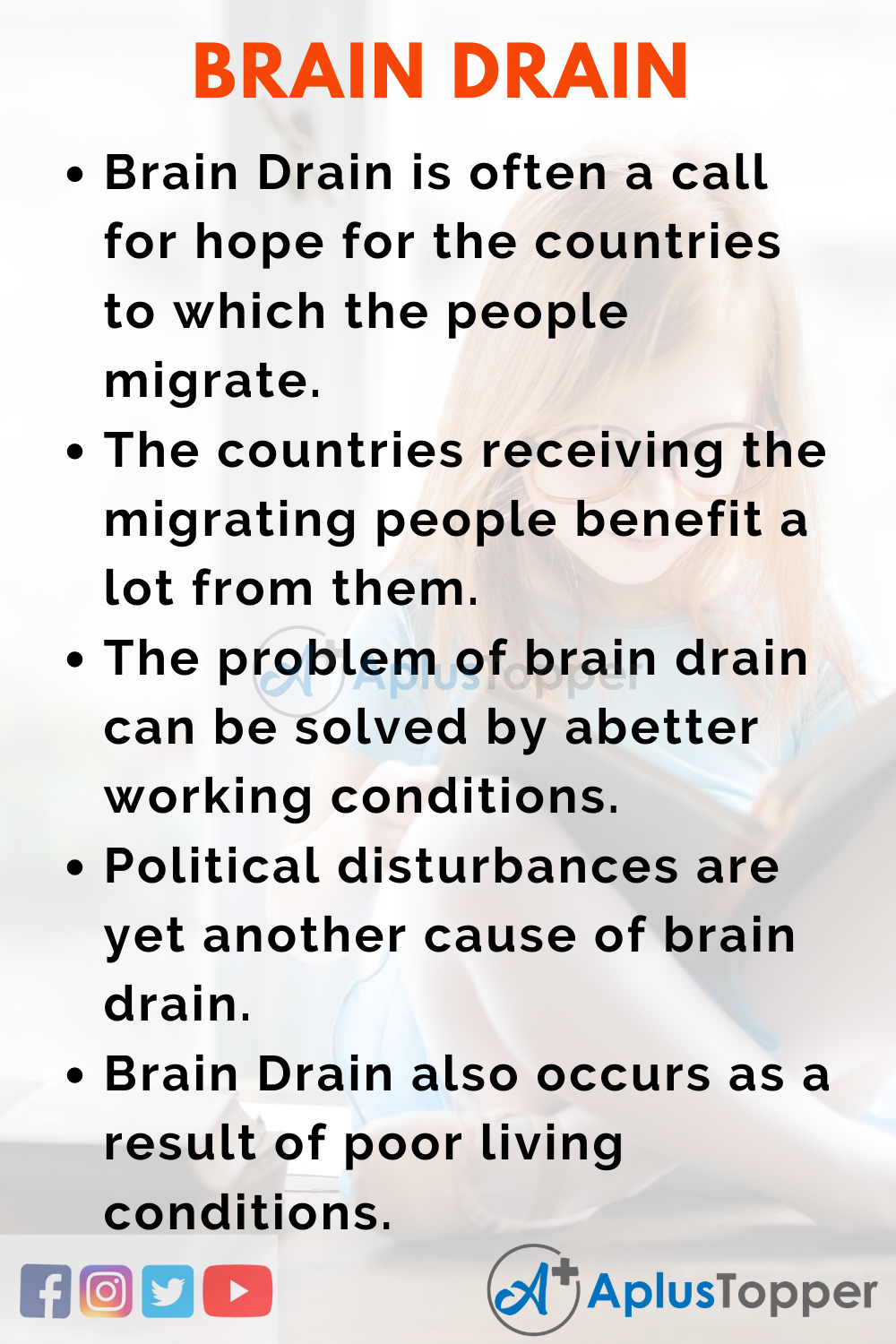 FAQ’s on Essay on Brain Drain

Answer:
Yes. Brain drain leads to the growing void in a country. There is an inevitable loss, economically and culturally.

Question 2.
What is the main reason behind the brain drain?

Answer:
Brain drain occurs due to a nation’s failure to provide excellent job opportunities, a decent standard of living, and better health standards.

Question 3.
Is brain drain harmful to a nation?

Answer:
Yes. Brain drain is harmful to a developing nation.