Essay on Bhopal: Bhopal is known as the capital of Madhya Pradesh. This city is widely popular for its two human-made lakes, including the upper lake and the lower lake that divides the city. You can find one part of the town surrounded by beautiful monuments, busy bazaars, rustic alleys, and elegant palaces in the north direction of the lakes.

Whereas, towards the south part of the lakes, the city situated includes glamorous infrastructures, sophisticated shopping malls, and giant roads. Bhopal is different from other towns. It also represents the past, the elegance, and the present.

We provide students with essay samples on an extended essay of 500 words and a short essay of 150 words on the topic Bhopal for reference.

Bhopal is a part of central India and comes under the state of Madhya Pradesh. This is normally located360 miles away from the capital of India, i.e., New Delhi. The population of Bhopal is almost 1.5 million.

Although back in 1984, the population only amounted to 850,000 due to the gas leak of Union Carbide, where over half a million people got exposed to this harmful chemical.

In the past, Bhopal was widely referred to as Bhojpal, formed from the king Bhoj. And including the dam ‘pal’ that had been constructed to create lakes around the city.

The current city of Bhopal is founded by Dost Mohammud Khan, who was an Afghan soldier under the command of Emperor Aurangzeb in 1707. After Aurangzeb’s death, he used the utter confusion caused by it to build a kingdom in Bhopal. Even though it was a tiny kingdom, it successfully survived several wars and transformed into a princely state in 1818 under British India.

Under the rulership of the Begums, the vast culture, public works, and the art of the city were enhanced. It was the rulership of Muslim women of the 19th-century dynasty. Even though not identified as a Begum, this dynasty’s ruler for 50 years was known as Mamola Bai. She ruled the city from behind the curtain after her husband passed away.

Bhopal has always been where people belonging from different religions like Muslims and Hindus live together in harmony. It is also displayed in the cuisine of the city.

There are both vegetarian and non-vegetarian dishes available in this city that are very delicious. However, some of the most popular dishes of Bhopal include the curries and kebabs that are considered the effect of the Mughal rule. However, vegetarian foods are normally medium spicy and have a distinct taste.

Bhopal is also a vital educational, industrial, economic, and political centre of the entire state. Besides, it also contains several installations and institutions that are highly and prestigious. The city has also been helpful in many other areas like literature, science, politics, etc.

At present, the elegance of Bhopal is higher in comparison with many different cities. The two lakes still dominate the city. Besides, the city’s beauty is doubled with its unique marketplaces, mosques, palaces, and so on. The new city is filled with magnificent parks and gardens, avenues, and classy buildings.

It is known to be one of the most developed cities in India. It is easier to travel to Bhopal in any transport, including railways, airways, and roadways. The flights to this city are regular and easy to take up. Besides, all of these transportation services are prominent and easily available across the country.

Also, Bhopal is one of the best places for people who enjoy theatres since it is the home to several famous theatre fests held here in places like Ravindra Bhavan, Museum of Man, Bharat Bhavan, and so on. 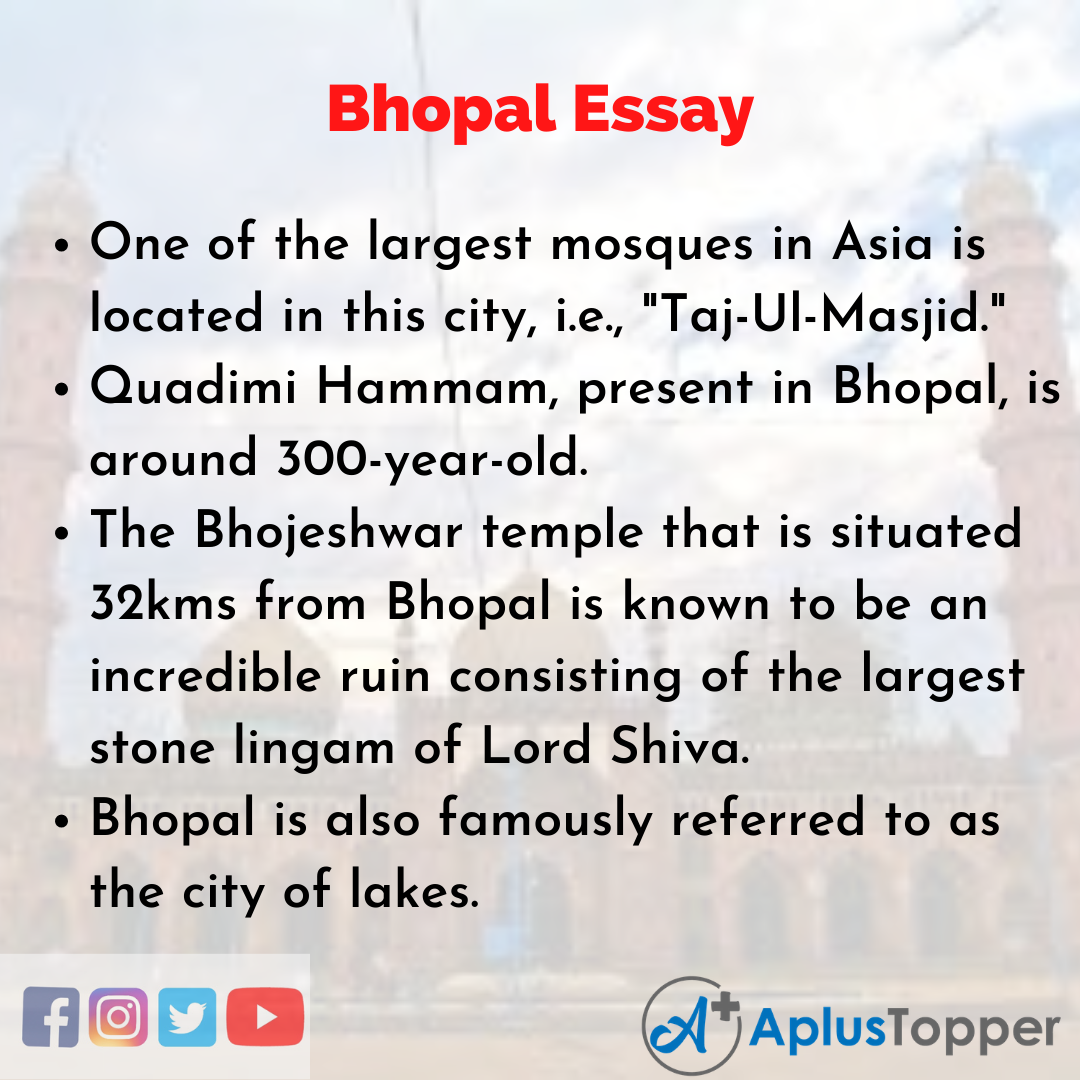 Bhopal is popularly referred to as the city of lakes. It is also the capital of the state of Madhya Pradesh. Raja Bhoj has established this city. The city comprises several artificial lakes along with natural lakes, which adds to its beauty.

Bhopal is one of the greenest towns present throughout the country that has maintained its charm from ancient times. The old area of the city includes crammed markets and small alleyways. Simultaneously, the new portion of the city is filled with bright and colourful parks and gardens.

Thus, the Bhopal at present is considered to be a mixture between the modern-day charms with the old day charms. The older part of the city goes over Ibrahimpura, Nadim Road, Peergate, and Sarafa is filled with marketplaces and rustic mosques and palaces. Also, Bhopal is considered to be much cleaner as compared to the majority of other cities in India.

10 Lines on Bhopal Essay in English

1. One of the largest mosques in Asia is located in this city, i.e., “Taj-Ul-Masjid.”
2. Quadimi Hammam, present in Bhopal, is around 300-year-old.
3. The Bhojeshwar temple that is situated 32kms from Bhopal is known to be an incredible ruin consisting of the largest stone lingam of Lord Shiva.
4. Bhopal is also famously referred to as the city of lakes.
5. The Upper lake is considered one of the oldest artificial lakes present across the country.
6. Bhopal has been originally derived from the name: Bhojpal”.
7. The rapid system corridor of the city is considered to be the third-largest across the entire county.
8. Chowk Bazaar, situated in the old city, is a famous shopping destination.
9. This city has several prestigious institutes for medical, architecture, law, fashion forestry, etc.
10. Bhopal is well-known for its creative work with beads. The demand for bags and purses made with these beads are high. 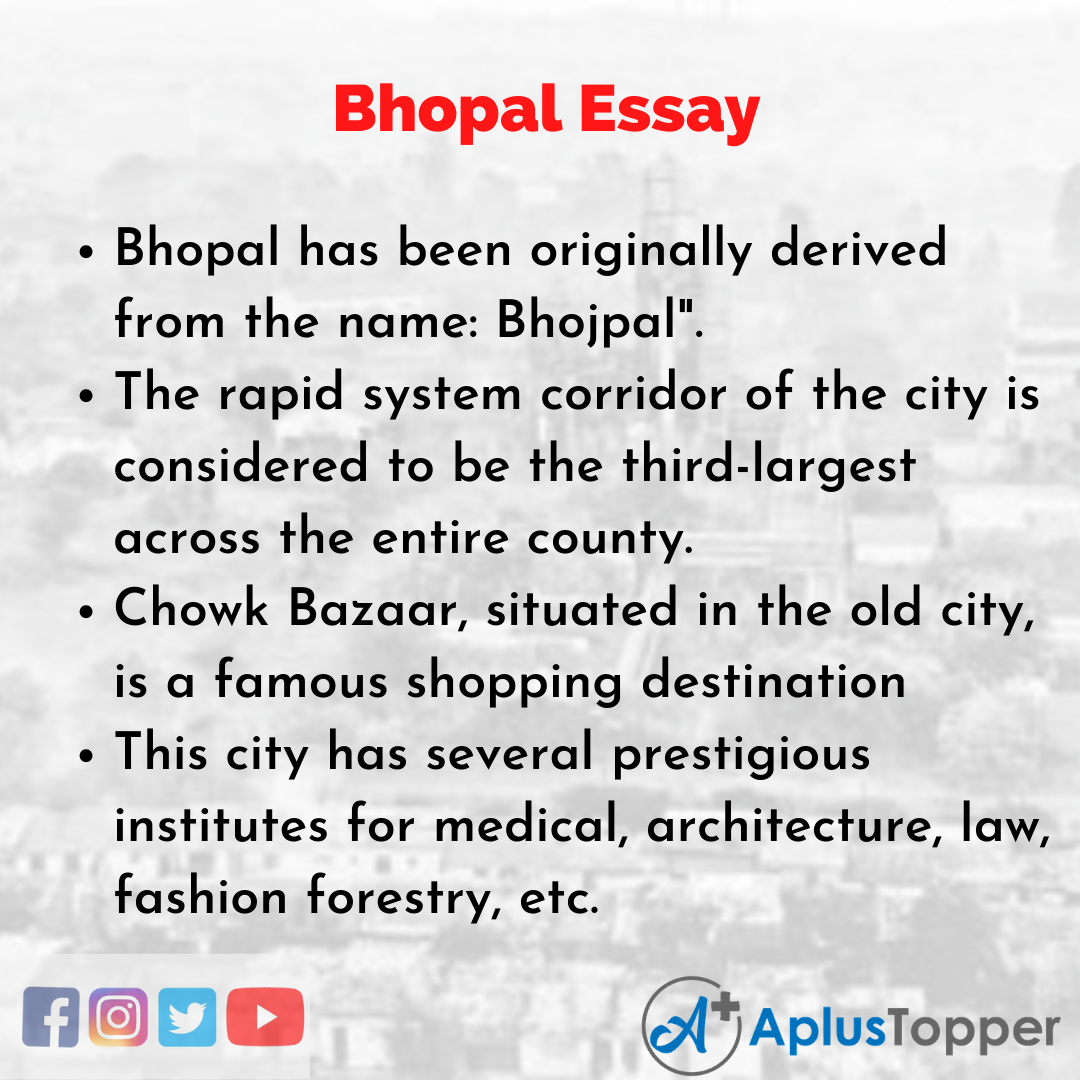 Question 1.
Why is Bhopal a popular city?

Answer:
Bhopal is a mesmerising and beautiful destination due to its mixture of modern and ancient worlds.

Question 2.
What are the places that are famous in Bhopal?

Question 3.
What is the time best recommended for visiting Bhopal?

Answer:
October-March is the best time for travelling to Bhopal.

Question 4.
What are the dishes that are widely famous in Bhopal?