Essay on Barriers to Empowerment of Women in India: Women empowerment ensures the right and deserved position/ status to the Women of society. Women in India have always been suppressed by the males, even after being socially and economically successful and independent. But now, women are coming out to mark their stand and standard in society and fight for their fundamental rights and respect that they deserve. Still, a few sectors strongly oppose the newly gained freedom and respect for the women and hinder their fight for women empowerment.

Women empowerment faces several minor and significant barriers. The biggest of all is society’s general mindset, which states that women are meant to take care of the family, do household chores, and not go out for earning. Essay on barriers of empowerment of women in India contains all the major and minor obstacles for the reforms and how they affect women’s status adversely. The article contains an essay on barriers to empowerment of women in India for students of different classes to understand the significant agenda and how to spot the hindrance in that.

We provide children and students with essay samples on a long essay of 500 words and a short essay of 150 words on the topic “Barriers to Empowerment of Women in India” for reference.

Unlike the previous decades, women in the recent era have acquired a dignified position in various fields and society. They are not bound to do only the household chores and take care of families. Women have exhibited multiple skills and talents, and have even exceeded men in various fields. Now the primary requirement for women’s growth and development is to ensure the right opportunities for them and freedom to pursue what they desire and indulge in the activities of their interest. But apart from all the advancements, women in various fields are still facing numerous challenges that hinder their growth and success.

The significant barrier in the Empowerment of Women in India is that many of them are forced to take care of their families and do the household chores, and leave the jobs and other household activities that they indulge in. For centuries, a significant segment of women in India has been confined to their homes, ensuring that they do not neglect family duties. This resulted in women being dependent on men for a longer span, thus functioning under their control and facing mental and physical exploitations.

Now, with women coming out to go for the job and earning and learning and higher education, they have achieved financial stability and freedom, but have doubled up their responsibilities and duties. Now they are required to fulfil the household jobs and also maintain their work life. And when the males of their families deny understanding and sharing the responsibilities of family and home, the women are eventually forced to get burdened up and take wrong decisions. This is a significant reason and a broader barrier to women’s employment, thus forcing them to leave their jobs.

Furthermore, women in Indian society also do not have a safer working environment and assured respect and security. They are harassed and tortured mentally and physically in various fields and organizations by the male employees of higher posts. Women also have to hesitate travelling at nights and late evenings due to rising crime rates, and thus have to give up on various jobs and opportunities due to safety concerns. And if not leaving the job, they are adversely affected by the issues, thus lowering their performance and hindering their success and promotions.

Women empowerment is a significant necessity but is unachievable with present crime rates against women. Thus, the male members of society need to understand their responsibilities towards their home and ensure safer working conditions. 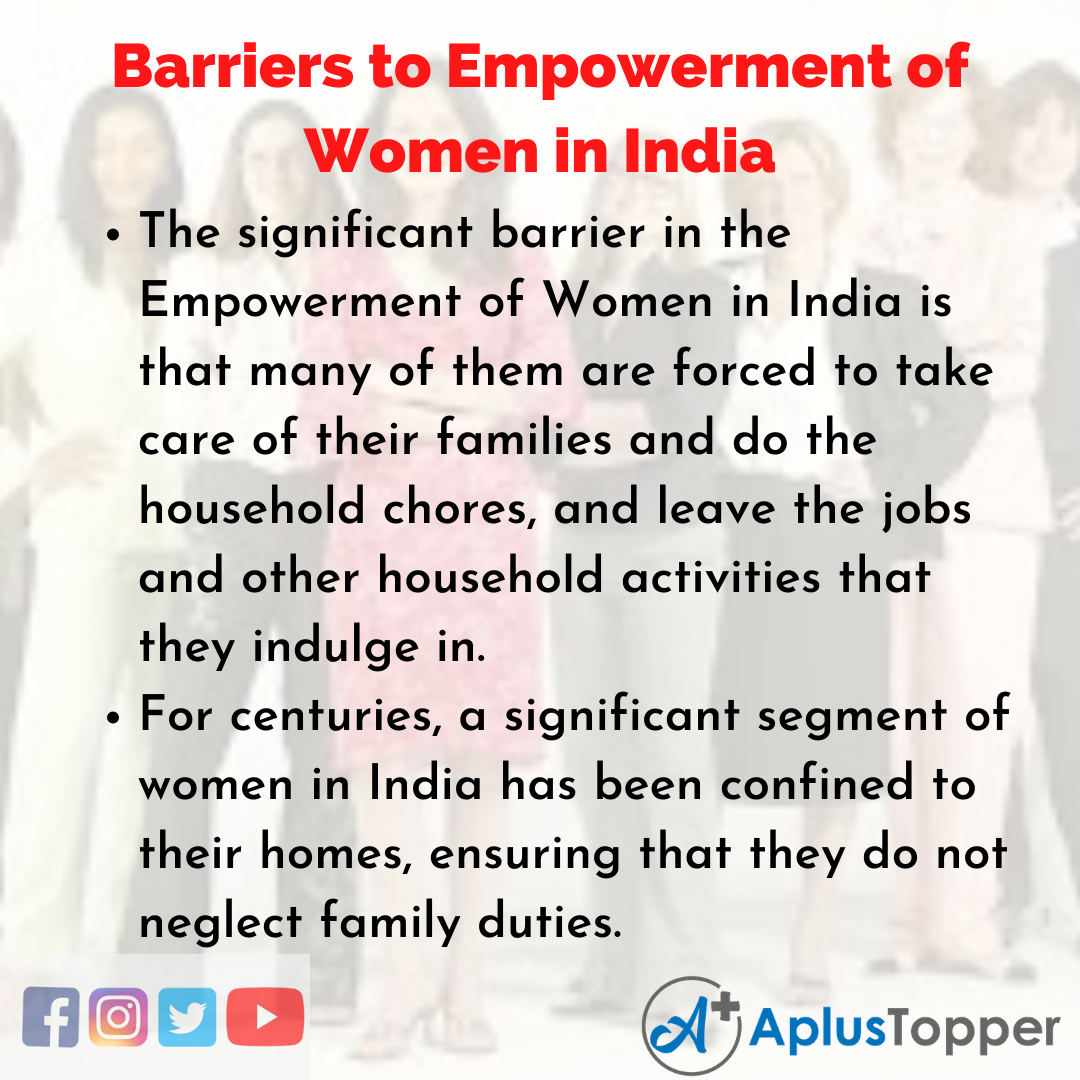 Long Essay on Barriers to Empowerment of Women in India is usually given to classes 7, 8, 9, and 10.

In the modern society of the 21st century, we have various equal rights for men and women. Women are exhibiting excellent results in various fields, even better than men in a few. But, even after advancements and modernization, women in Indian society are still lagging due to lack of understanding about the essence of women empowerment. Indian culture is a male-dominated and patriarchal one. Most of these males expect women to indulge in only household chores and avoid going out of their homes for any job or other activity.

There is a rising need for women empowerment and growth in society. Women empowerment is essential to eradicate domestic violence from the society that women of the nation face for ages. Women face both mental and physical abuse cases and often go silently without discussing the issues that they suffered for avoiding the tarnishing of their family’s reputation. Women suffer a lot and have distress-full lives, and empowering the women of society might help them come out and put down all the domestic abuses.

To start with women’s empowerment, we must initially raise the literacy rate and try to educate as many women and girls as possible. This will eventually help to make the women independent and financially stable. With this, the women will also get better job opportunities and won’t have to rely on men for their living, and thus they would not be forced to suffer the shameful acts of the dominating men. Educated women will also have a better living standard and promote education for the coming generation (including both daughters and sons), thus reducing the poverty rate.

Presently, a significant segment of women in Indian society suffers at men’s hands, live in continuous stress, and face regular mental and physical abuses and domestic violence. Women are often forced to stay at home and take care of their families, without thinking of moving out and becoming independent and successful. They also suffer a lot of torture and constant crimes. These throw them into the deeper well of depression and thus cannot rightly nurture their kids and have a better lifestyle for themselves and their family. An empowered and educated woman, on the other hand, is aware of all her rights, knows what she deserves and the amount of respect that she must have from all, and cannot be dominated by the males of the society. In the latter condition, knowing the woman’s stand and worth, men think twice before doing any offence against her. Thus they eventually get a healthier lifestyle and living environment.

However, even after knowing the benefits and importance of women empowerment and promoting women to work and have better lifestyles; this is still impossible because of the women’s fear of going out late nights and evenings due to rising crime rates. Women are also mentally and physically harassed in various institutes and organizations and are mentally tortured to leave their posts. These must be eradicated from the roots to ensure better conditions for women and thus assuring women empowerment.

Women in Indian society have suffered a lot at the hands of males of the society since the ancient and medieval times. They have not received the deserved status and position in society and have been forced to accomplish the jobs assigned to them by society’s males. In India, women are mostly suppressed in the name of religion, traditions, and culture. But as of now, everyone must understand the need to open up the mind and let go of the older way of thinking and ensure women empowerment for the good of the women and the entire nation.

Tradition and culture of India restrict the women and confines them to the four walls of their homes. The tradition expects the women to do significant household chores, take care of their families, and avoid going out for job and income. Women are believed to fulfil only their sole responsibility for the mentioned duties, for which they are born. In India, the women who defy the set norms and move out of their homes for other jobs are considered to have lower virtue. This is a significant barrier to women empowerment.

In modern women in the present era have joined several professions and are thriving in the male-dominant society and its field. Still, people in the rural area have the same backward mentality and do not prefer women to seek education and do jobs. Males dominate women in a significant segment around the nation. They cannot enjoy their fundamental rights and have no say in the family or other sectors’ significant decisions.

Huge family responsibilities are also a hindrance to the women empowerment. On the other hand, the men of various families act carelessly and always impose the family duties on women, without being a helping hand for them. Women have to take care of their parents, in-laws, husband, kids, and do all the major household chores, handle the budgets of home, cook food, and do all the complex jobs and give the proves of being a good mother, good wife, good daughter and daughter in law. In the chaos of all these jobs, many cannot manage the time and take time out for their jobs and other household activities for which they wish to be a significant part.

Furthermore, if the family members do not do their home duties and responsibility properly and concentrate more on their profession or social life, they are considered irresponsible and immoral. Thus, many of the women also have to give up their profession and jobs and get completely dependent on the male of their house and family. Women also have to stay under too much pressure to worsen their efficiency in indoor and outdoor responsibilities and hinder their way towards success. This is a massive injustice against India’s women and a significant hindrance to their success and women empowerment.

Another significant barrier to the women empowerment is the mindset of men and other members who hold some authoritative status. Women going out for jobs and seeking an education are also scared of travelling alone in late evenings and at night because of rising crimes and violence against them. Many males of society also do not leave any opportunity to harass and abuse women and take advantage of them. This is a significant hindrance to women’s empowerment and success.

The number of rape cases is also increasing, and women face physical and mental abuses and harassments in offices and other work areas and their homes. Thus they are either forced to leave their jobs or think twice before joining any. This is another barrier to women empowerment and hampers the growth and success of women. Some threats and issues hinder the overall success and growth of women; this is why it is essential to promote women empowerment and ensure better status for women in society. 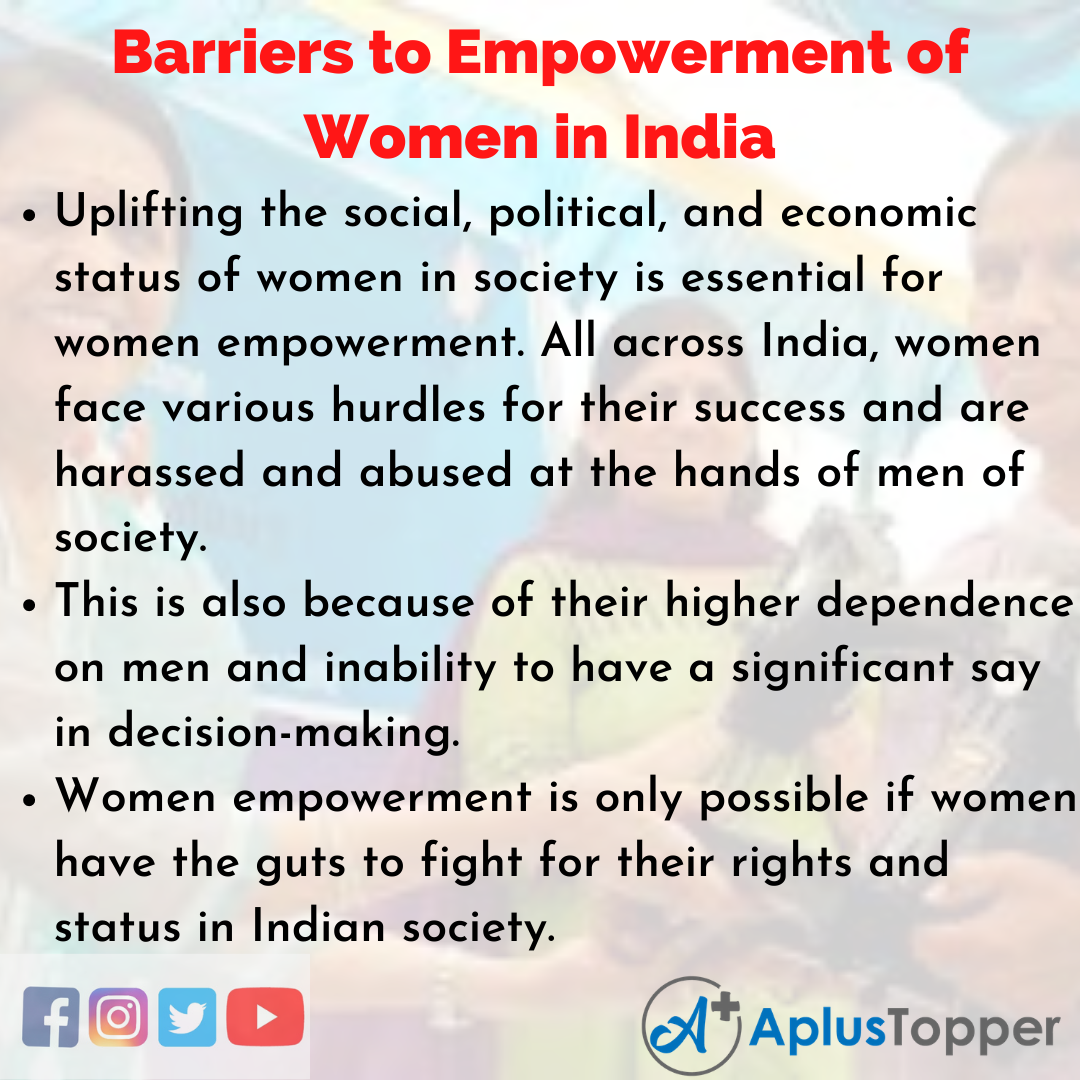 Barriers to Empowerment of Women in India Conclusion

Uplifting the social, political, and economic status of women in society is essential for women empowerment. All across India, women face various hurdles for their success and are harassed and abused at the hands of men of society. This is also because of their higher dependence on men and inability to have a significant say in decision-making. For empowering women in society, they must have independence and the ability to stand on their legs and grasp all the opportunities coming their way. Women empowerment is only possible if women have the guts to fight for their rights and status in Indian society.

Women empowerment must be focused on, on a priority basis. This can be ensured effectively by promoting education for women, improving their status socially, politically, and economically, eliminating crime and violence against women, and spreading awareness among men to respect and treat women in a better manner. This article contains an essay on barriers to empowerment of women in India in three categories of word range for helping the students and children of various age groups and meets their diverse needs.