Essay on Bal Swachhta Abhiyan: Bal Swachhta Abhiyan is a mission that was launched on 14 November 2014 by the Government of India to spread awareness about cleanliness and hygiene among children. It was established as a neighborhood initiative to get people of all ages involved in educating children. Cleanliness and hygiene are a necessity when it comes to preventing the spread of diseases and illnesses. It even helps in increasing the life expectancy rate. Many children die from diseases across India that could be prevented if their environment was clean and there was awareness about such things.

That is why it is a good thing to teach children from a young age about cleanliness at a young age so that it becomes a habit that is carried on into adulthood. They must understand that cleanliness is their first and foremost responsibility. This promotes a good life that is healthy physically, mentally, socially, and intellectually.

Bal Swachhta Abhiyan campaign was launched by the Central Government on 14 November in 2014 on the first Indian Prime Minister’s birth anniversary, Jawaharlal Nehru. It is a five-day-long cleanliness campaign that begins on 14 November and ends on 19 November, which happens to be the first Indian woman’s birth anniversary, Indira Gandhi. It is meant to be an annual campaign and not only a one-time event.

Manek Gandhi, the Union Women and Child Development Minister of India, launched this initiative at the Maidangarhi Anganwadi, Delhi. The mission’s main objective is to spread awareness among children about the importance of cleanliness and hygiene. This made Children’s Day more purposeful and impactful by celebrating them and educating them about something highly vital for their livelihood and survival. Education about cleanliness can, after all, save many children’s lives.

Bal Swachhta Abhiyan was launched on 14 November 2014 by the Indian Government to celebrate Children’s Day in a more impactful and educational manner. It was a five-day-long campaign starting on Prime Minister Jawaharlal Nehru’s birthday and ending on 19 November that is Prime Minister Indira Gandhi’s birthday. Bal Swachhta Abhiyan has been launched to spread awareness among children about the importance of environmental and personal hygiene.

This campaign is to be celebrated by all educational institutions to spread awareness through cultural programs or by hosting competitions like essay writing, debates, discussions, chart-making, recycling exhibitions, and other forms of art. The faculty members are also to initiate cleanliness drives to clean the campus or the neighborhood and take the effort to educate those around.

Bal Swachhta Abhiyan’s main objective is to tell children that cleanliness and hygiene are incredibly vital to have a long and healthy life. And in this manner prevent the spread of diseases and illnesses as well. Awareness is always the first step to fighting, which is why this initiative is significant among children, so they are aware at a young age about the importance of cleanliness. Many children die due to diseases like cholera and such, which can be very easily prevented with an effort made towards cleanliness, so children of all ages must be aware of cleanliness and hygiene. In the same vein, India’s Government launched a five-day-long campaign from the 14th to 19 November called the Bal Swachhta Abhiyan. It begins on Children’s Day to celebrate it more purposefully. Each theme was educational in telling the children about the importance of hygiene and how to live a hygienic life.

How it was conducted

Schools took part in this initiative while celebrating Prime Minister Jawaharlal Nehru’s birth anniversary. This was done in anganwadis and cultural activities and little competitions organized, such as debates, speeches, essay-writing, chart-making, poetry recitation, painting, and other forms of art sports activities, etc. In this manner, having the children research and educate themselves and learn from teachers and their classmates. In other places, this was a sort of neighborhood initiative having everyone involved.

All this would mean that the schools themselves would make an effort to provide a clean and hygienic environment for the children. Be it by providing toilets or such. And children too, having gained awareness, making sure to maintain cleanliness in all that they did through the day. All this made the initiative successful.

The child cleanliness campaign was launched by Srimati Maneka Gandhiji, the Union Minister for Women and Child Development at the Maidangarhi Anganwadi Center, New Delhi. It is a six-day long campaign that ends on 19 November, the birth anniversary of Prime Minister Indira Gandhi. Through the five days, the children gain awareness due to the sanitation program that takes place. Various activities and such are held in competitions and sports to impart understanding in a fun manner.

It is a well-known fact that it is easier to teach children something new than an adult, so there is no better time than childhood for having a campaign. Children are the future of the nation, and the future will be safe if they are taught such crucial things in this manner, fulfilling our Swachh Bharat Abhiyan objective. The objective is to teach children what it first means to be clean and why it is essential. Following with how to keep yourself and your environment clean and hygienic. To also motivate and encourage them to cultivate cleanliness habits when it comes to food, water, and using toilets. When children learn, they carry this knowledge into adulthood and teach the ones that come after. Thereby ensuring that the habit carries on.

Various seminars, essay competitions, debates, chart-making competitions, recycling competitions, and such were held. In this manner, what was taught to them was reinforced in multiple ways and through various teaching methods. Faculty members and teachers encourage the students to do the same when they also visibly practice the same. When they do so, they are also protecting the children from diseases. This increases life expectancy rates among children and reduces the number of children that die below the age of 5. Something that is unfortunate and must be prevented at all costs.

Learning such habits at a young age ensure that children keep themselves clean. It also helps stop the spread of preventable diseases that come from food and water like cholera and such. When a child keeps such habits, parents and guardians are also likely to do the same to encourage the children to do well. This means that this campaign benefits not only the children themselves but also their families and neighborhood.

Bal Swachhta Abhiyan is a cleanliness campaign under the parent campaign Swachh Bharat Abhiyan launched by the Government of India on 2 October 2014. While this one focused on nation-wide cleanliness and sanitation, the Bal Swachhta Abhiyan focuses on children. It begins on 14 November and ends on 19 November. Since it focuses on children, it starts on Children’s Day, i.e., the birth anniversary of Prime Minister Jawaharlal Nehru.

The child cleanliness campaign was launched by Smt Maneka Gandhi, the Union Minister for Women and Child Development at the Maidangarhi Anganwadi Center, New Delhi.

The campaign is aimed at cleanliness by teaching children to do the same wherever they are. To cultivate habits of cleanliness in the children at this crucial junction in their life. So that they carry these habits for the rest of their lives. As it is known that habits that children pick up at that age stay through their lives and are challenging to break.

Keeping this in mind, the Government targeted the children to teach and educate them about sanitation and practice it for life. When children are keen to practice these habits in their classrooms, homes, or playground, it also inspires others around them—thereby affecting their families to practice the same. And this, in the long run, positively affecting society as a whole.

The Abhiyan educates and spreads awareness and teaches the children how to do as they are told practically. Like washing their hands frequently, keeping toilets clean, making sure food and water are stored in a clean space, etc. This helps them live a disease-free life.

Importance of the Abhiyan

It is very easy to catch dengue or malaria if stagnant water is left for a long time. Other diseases that are water-borne or food-borne like cholera or something as simple as food poisoning can be fatal if there is no access to medication or treatment. Such deaths can be avoided altogether if there is an awareness of how we can keep our surroundings and food clean. Hygiene is a big part of preventing diseases. This applies to air-borne and contagious diseases as well. To prevent such unnecessary and unfortunate deaths, there needs to be education about how to keep clean. And this Abhiyan does an excellent job in providing this awareness to give children a fighting chance.

How the Abhiyan was conducted

Each one of the five days in 2014 had different themes that were “Clean Schools, Our Surroundings and Playgrounds,” “Clean Food,” “Almonds,” Keep Clean,” “Cleaning Drinking Water,” and “Clean Toilet.” In this manner, the children were taught how to keep their schools and houses clean practically. As is practiced and taught in these two places, the children are prone to do the same outside. They were also taught how to make sure that food and water are stored well and kept clean. Keeping away from contaminants and bacteria that can cause illnesses and diseases. They were also taught about clean toilet habits.

There were cultural activities that were held and competitions and activities like essay writing, debates, speeches, painting and other forms of art, seminars, sports, etc. Multiple teaching methods ensured that all types of learners could pick up and grasp what was being taught by the faculty members and others conducting these activities.

The children were taught how to keep canteens, classrooms, and toilets clean. The importance of having clean food and drinking water along with how to dispose of waste. They were also taught to brush their teeth regularly, take frequent baths, wash hands before and after meals, and keep clothes and shoes separate for inside and outside the house. How utensils in the kitchen should also be kept carefully to ensure clean food.  The students are motivated by all this and by their teachers and elders who did the same so children can imitate cleanliness habits. And break unhealthy habits that can be dangerous and even fatal for them. 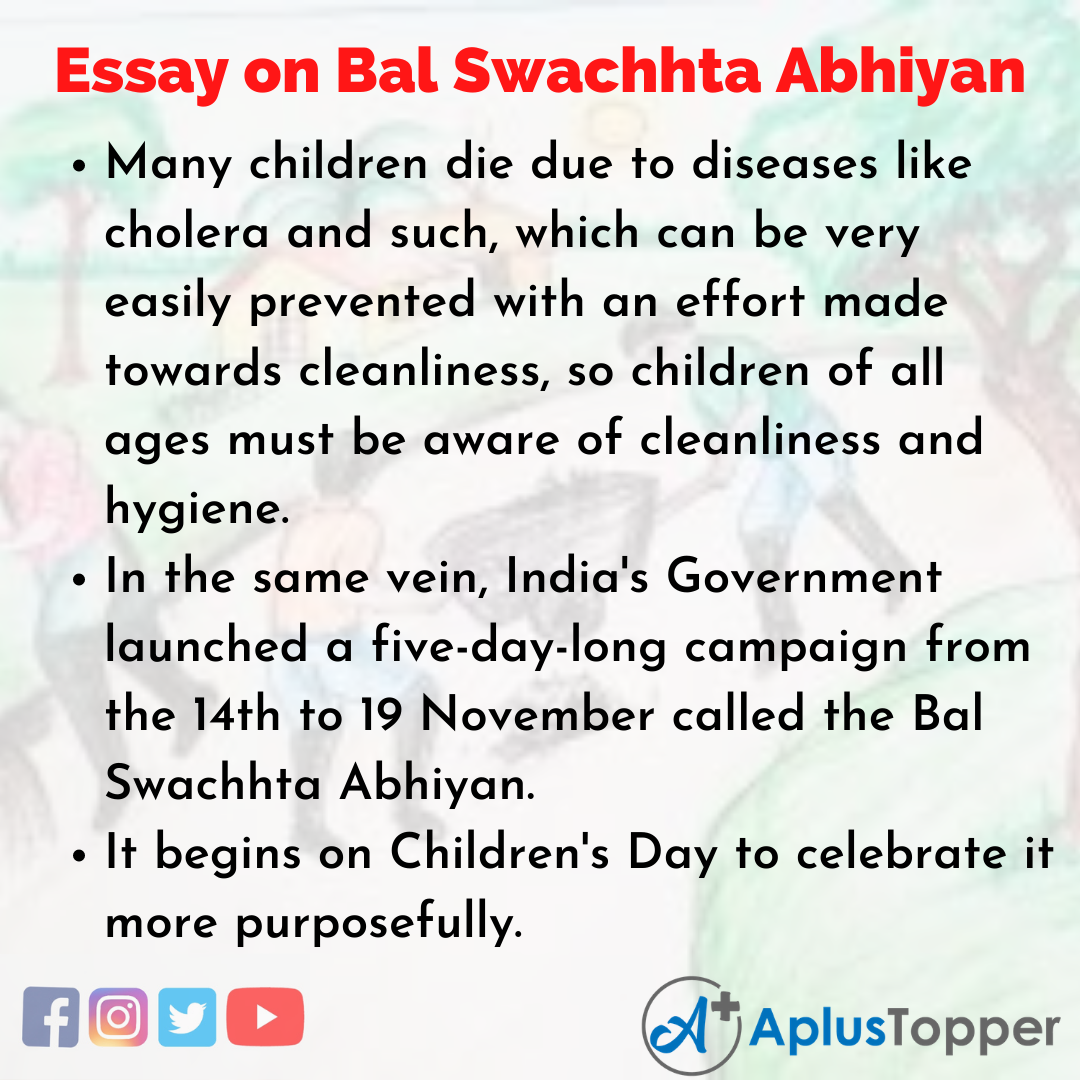 In this manner, the Abhiyan was successful, and children were taught how to cultivate habits to ensure cleanliness, thereby protecting our nation’s future. It is incredible that this initiative was taken and implemented by the Government to keep our children and our future secure.