Essay on Badminton: Badminton is a great sport for fitness and is very excellent for individuals of all age groups. If you want to try out a new racket sport, it is a great choice. It is officially chosen as the fastest of all racket sports inthe world. The speed at which a player can hit the shuttlecock is up to 288kph toward their opponent.

A player can also run around the court up to 6.4km or 4 miles during the match, so the players must have great agility to keep up with this game. Although agility and stamina are necessary for this game at a competitive level, anyone can play this game to achieve fitness and flexibility.

We are providing children and students with essay samples on a long essay of 500 words and a short essay of 150 words on the topic Badminton for reference.

Badminton is a game that is mainly played indoors with a lightweight racket and a shuttlecock. Anciently, a small cork was instead of the shuttlecock, with a hemisphere, and 16 geese were attached to it, weighing about 5 grams. But nowadays, the shuttles are generally made from synthetic materials, which is allowed by the BWF that is Badminton World Federation.

The badminton name is based on the country’s residence for the dukes of Beaufort in England. The game was played in residence for the first time in the year 1873. The game’s foundation came from countries such as Greece, India, and China, and is this game is very relatable to the children’s game shuttlecock and battledore.

The governing body of badminton worldwide is the badminton world federation famously known as BFW. This governing body was established in the year 1934, and the first championship under BWF was arranged in 1977. This game is famous in many countries but mainly in Denmark, Japan, Malaysia, and Indonesia.

There are numerous national, regional, and zonal tournaments which are held in many countries. All-England championships, Uber cup, and Thomas cup are some of the most famous tournaments.

The sport, badminton, can be either played in singles or doubles that means either a single player on both sides can play or double players on both sides can play on the badminton court, which measures 13.4m in length and 6.1m in width. A net is present in the middle of the court. When the player hits the shuttlecock, the opponent gets the point if the shuttlecock hits the ground.

You can now access more Essay Writing on Badminton and many more topics.

There is a toss at the beginning of the game. The player who wins the toss decides the courtside and the service. The player who serves first should make it diagonally, and if he misses, it may cost him a point. When the game finally starts, the players are allowed to move anywhere. Furthermore, the service should be done under the waist or underarm as overarm services are not allowed. So, the player has to keep that in mind not to lose a point. If the player touches the net or any part of the shuttlecock, the opponent gains a point. There is a referee who monitors the whole game. 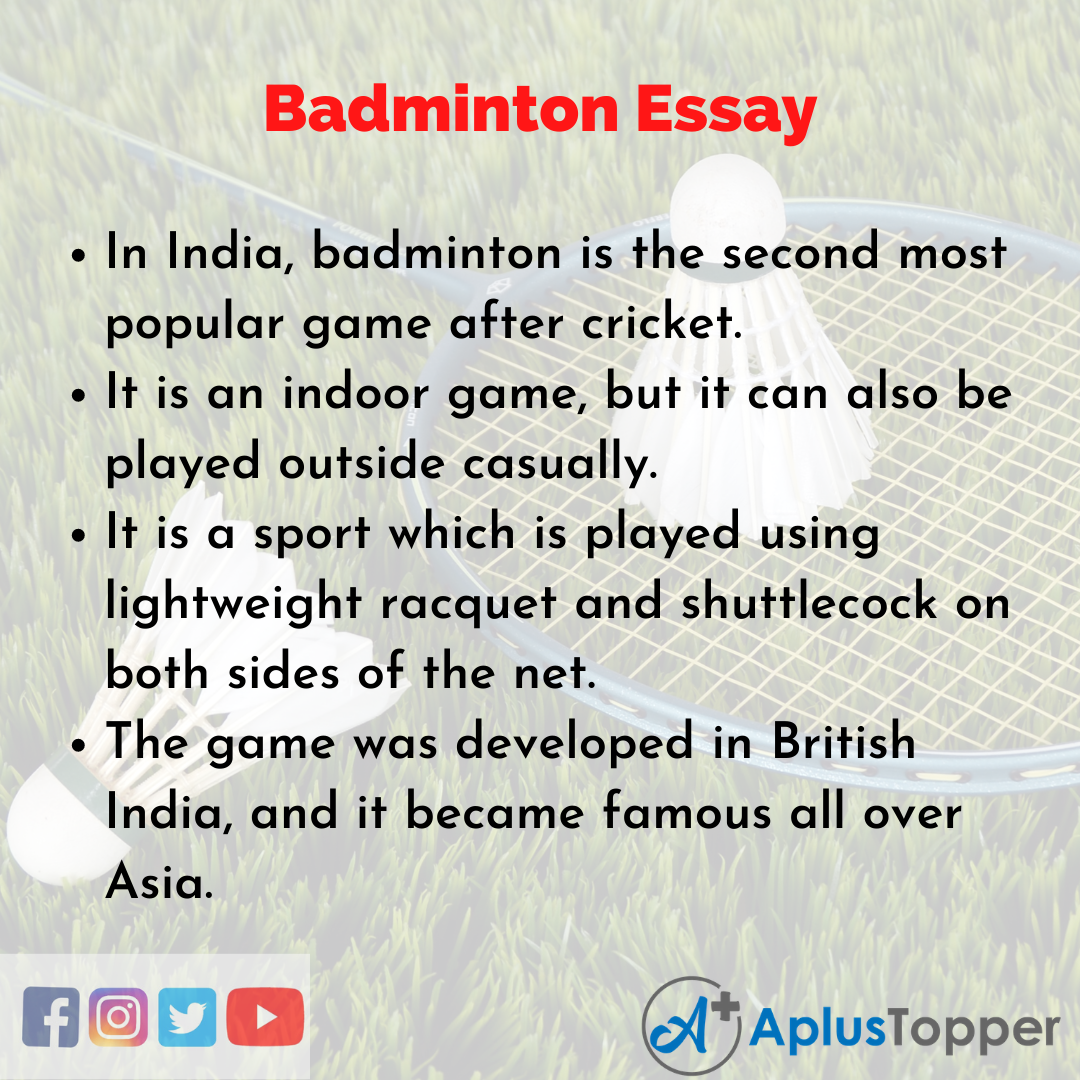 Badminton is a sport which is very common and is played worldwide. It mainly involves hitting the shuttlecock back and forth with the help of a racquet across the net between two players or four players.

The racquet has to hit a web made of steel, which is oblong-shaped. The court in which badminton is played is divided into two parts with the net in between, and the players wear lightweight shoes so that they can move rapidly to hit the shuttlecock in the opponent’s region.

There are various advantages of playing badminton as it makes our body more flexible and increases our muscle strength. It also acts as a stress buster and reduces anxiety, depression issues. It reduces the risk of high blood pressure, obesity, and diabetes. It burns calories and helps in losing weight; therefore, a great way to strengthen our body. So, one must find a way to play badminton in their free time to live a healthy and stress-less life.

10 Lines on Badminton Essay in English

1. In India, badminton is the second most popular game after cricket.
2. It is an indoor game, but it can also be played outside casually.
3. It is a sport which is played using lightweight racquet and shuttlecock on both sides of the net.
4. The game was developed in British India, and it became famous all over Asia.
5. The most used terms in this sport are serving and scoring.
6. The badminton court or field is rectangular, and it is divided into two equal parts.
7. The risk of injury while playing badminton is very less due to which people of all ages can play this game.
8. After playing badminton, the body becomes agile and flexible, and one does not feel tired throughout the day.
9. As badminton helps individuals exercise their arms and legs together, so many people play it regularly.
10. The badminton court has a length of 44 feet and a width of 20 feet. 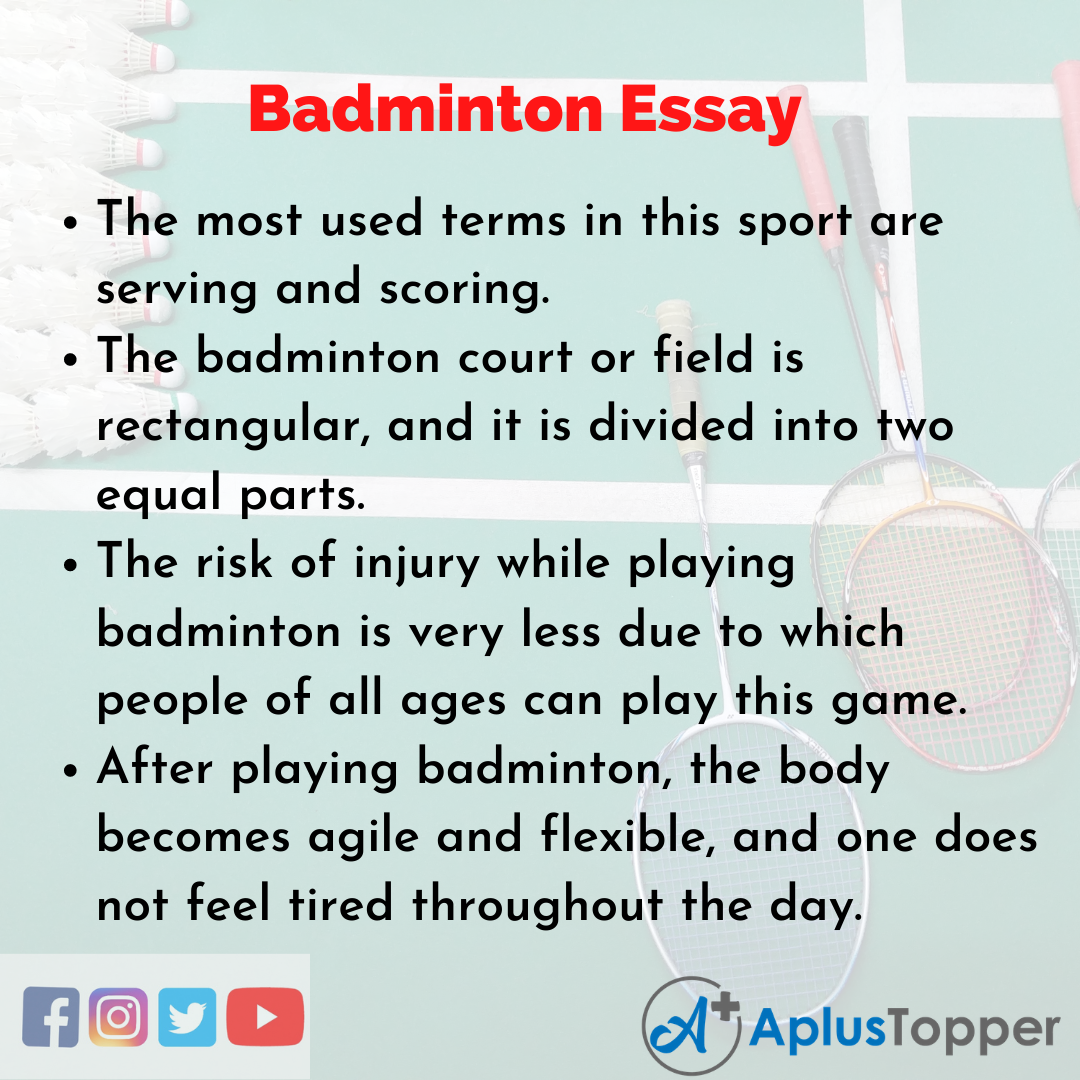 Question 1.
When the shuttlecock hits the net, what happens?

Answer:
The opponent, on the other side, gets the point when the shuttlecock hits the net. If any of the body parts touch the shuttlecock, it would also count as a foul, giving the opponent a point.

Question 2.
Why is badminton known as an indoor game?

Answer:
Badminton is an indoor game because if we play it outside, the wind will blow the shuttlecock away as it is very light in weight.

Question 3.
Explain the importance of badminton.

Question 4.
What are the basic skills used in badminton?

Answer:
Some of the basic skills used in badminton are: