Essay on Ashoka: In the annals of the world history, there have been many kings, but none greater than Ashoka. Popularly known as ‘Devanampriya Priyadarsi’ (He who is the beloved of the Gods and who regards everyone amiably), he reigned over most of India, South Asia and beyond. His story tells us that religion can act as a powerful force for the redemption of a human being. According to Buddhist traditions, Ashoka was born as the son of the Mauryan emperor Bindusara by a relatively lower ranked queen named Dharma. The Avadana texts mention that his mother was queen Subhadrangi. He was the grandson of another great king and the founder of the Mauryan dynasty, Chandragupta Maurya. But defying all odds, young Ashoka excelled in military and academic disciplines. There was a great deal of sibling rivalry, especially between Ashoka and his brother Sushim, both as warriors and as administrators.

Below we have given a long essay on Ashoka of 500 words is helpful for classes 7, 8, 9 and 10 and Competitive Exam Aspirants. This long essay on the topic is suitable for students of class 7 to class 10, and also for competitive exam aspirants.

An impeccable warrior general and a shrewd statesman, Ashoka was very popular. He was a fearsome hunter, and according to a legend, killed a lion with just a wooden rod. His growing popularity made his elder brothers wary of his chances of being favoured by Bindusara to become the next emperor. The eldest of them, Prince Sushim, persuaded Bindusara to send Ashoka to Takshashila to quell an uprising. But as news of Ashoka’s visit with his army trickled in, he was welcomed by the revolting militias and the uprising ended without a fight. Some more incitements from Sushim led his father to send Ashoka into exile. So, he went to Kalinga and stayed there incognito for many years. Meanwhile, there was a violent uprising in Ujjain. Emperor Bindusara summoned Ashoka back. Ashoka went to Ujjain and was injured in the ensuing battle, but his generals continued the fight. Ashoka was treated in hiding by Buddhist monks and nuns. This is where he first learnt the teachings of Buddha. In the meantime, Ashoka’s father was taken ill.

A clique of ministers lead by Radhagupta, summoned Ashoka to take the crown. As the Buddhist lore goes, in a fit of rage, Ashoka attacked Patliputra and killed all his brothers and threw their bodies into a well. At this stage, many called him ‘Chandashoka’ meaning murderer and heartless Ashoka.

Brave and full of valour, after ascending the throne, Ashoka expanded the boundaries of his empire. At this point, he was called ‘Chakravarti’ which means ‘he for whom the wheel of law turns’. However, the conquest of Kalinga turned the wheel of fortune for him. As the tale goes, Kalinga gave official refuge to Ashoka’s enemy (probably one of his brothers). This enraged Ashoka and he asked Kalinga’s royalty to submit before his supremacy. When they defied this dictat, Ashoka sent one of his generals to make Kalinga submit to his supremacy.

However, Ashoka’s general and his forces were completely routed. Baffled by this defeat, Ashoka attacked with the greatest invasion ever recorded in the Indian history till then. The whole of Kalinga was plundered and destroyed. After this devastation, Ashoka was left speechless. While he was walking through the battlefields of Kalinga after his conquest, he saw thousands of dead bodies lying there and the wailing of people. He was constantly haunted by his deeds in Kalinga. The repentance at the brutality of the conquest led him to embrace Buddhism. He undertook a 256-day pilgrimage to holy places of Buddhism in North India. From that point, Ashoka, who had been described as ‘the cruel Ashoka’ (Chandashoka) started to be described as ‘the pious Ashoka’ (Dharmashoka). He propagated the Vighajjavada School of Buddhism and preached it within his domain and worldwide from about 250 BC.

Emperor Ashoka, undoubtedly, has to be credited with the first serious attempt to develop a Buddhist policy. He built thousands of stupas and viharas for Buddhist followers (about 84,000 such monuments were built). The stupas of Sanchi are world famous and the stupa named Sanchi Stupa I was built by Emperor Ashoka. During the remaining period of Ashoka’s reign, he pursued an official policy of non-violence called ahimsa. The unnecessary slaughter of animals was immediately abolished. Moreover, rest houses were built throughout the empire to house travellers and pilgrims free of charge. Egalitarianism became a norm for the society. Slavery was non-existent in ancient India. Ashoka amalgamated Buddhism with material issues of concern, thus fulfilling Buddha’s wish of alleviation of people’s sufferings. To that effect, Ashoka had wells dug, irrigation canals and roads constructed. Other than rest houses, he also built hospitals, gardens and plantations of herbs. 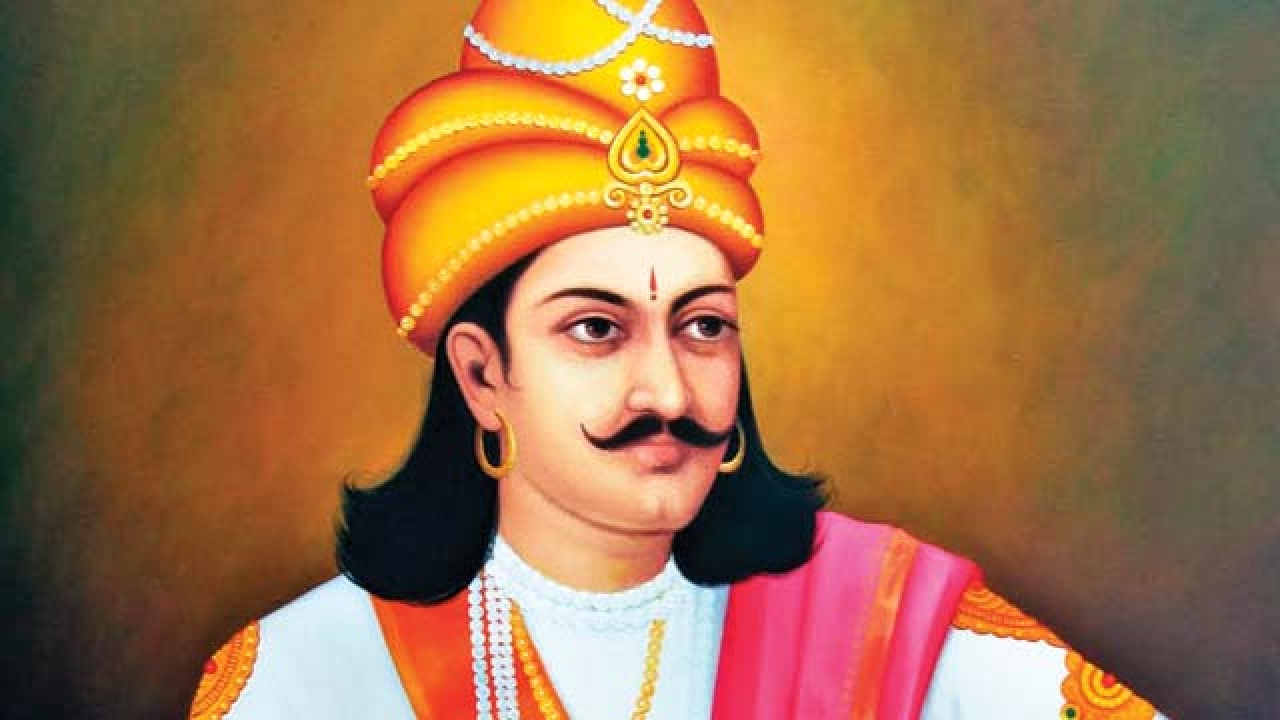 Below we have given a short essay on Ashoka is for Classes 1, 2, 3, 4, 5, and 6. This short essay on the topic is suitable for students of class 6 and below.

To propagate his faith, the great Ashoka who believed in ‘dharma’, built many edicts. The Ashoka Pillar at Sarnath is the most popular relic left by him. Made of sandstone, it records the visit of the emperor to Sarnath in the 3rd century BC. It has a four-lion capital, which was adopted as the emblem of modern Indian republic. Ashoka ruled for an estimated 40 years, (273BC – 232BC) and after his death, the Maurya dynasty lasted just 50 more years. But Ashoka’s greatest legacy is the first written language in India, father than Sanskrit, the language used for inscription was one of the current spoken form called Prakrit. One of his monument’s inscription read

“All men are my children and l, the king, forgive what can be forgiven.”

He modified his foreign policy from that of expansionism to a peaceful co-existence with neighbours. He avoided any further conquests of territories and announced that conquests should be of human desires. He strived to spread ‘right conduct’ among his people. Ashoka’s loftiness and his prowess can be gauged from the fact that it was not until some 2,000 years later under Akbar and his great-grandson Aurangzeb, that a portion as large as the sub-continent could be again united under a single ruler. Science fiction novelist HG Wells rightly says

“Amidst the tens of thousands of names of monarchs that crowd the
columns of history, their majesties and graciousness and serenities
and royal highnesses and the like, the name of Ashoka
shines and shines, almost alone, a star.”