Essay on Article 15 of Indian Constitution: The crux of our democracy and the values on which India stands is equality, liberty and fraternity for all the people of the country without any discrimination. And essay on article 15 of the Indian constitution celebrates these values that India was built on.

This article of essay on article 15 of the Indian constitution can be used by students to learn about what our constitution offers to its citizens. This should be read not just by students and children, but by all the law-abiding citizens of the country to educate themselves about their rights.

Article 15 of the Indian Constitution guarantees equality before the eyes of the law for all the citizens of India. The article prohibits the Indian state against discrimination of people based on caste, religion, sex, race, or place of birth. This article constitutes the fundamental rights that the constitution of India guarantees every citizen without any sort of discrimination.

India has a history of discrimination right from the 11th century to the 21st century. The enslavement of Indians by the British, the dangerous caste system that is described in the Manu Smriti and discrimination during the Mughal rule are some of the testimonies of why article 15 holds so much water in a country like India. Right to equality and the right to freedom is one of the biggest and most important rights that the constitution empowers its citizens with.

Even if we assume for a second that article 15 does not exist, the whole structure of the society will start collapsing one by one. The caste system and the superiority complex in a certain section of a population are so much imprinted in our brains that article 15 is the reason why people are not being racist or castist openly in public. If article 15 is abolished, then there will be a civil war, unrests and a complete overhaul of the carefully built society in our country as witnessed by the black lives matter in the USA now.

The word discrimination in this article refers to certain practices in Indian culture such as untouchability. There have been numerous cases of discrimination of lower caste people such as Dalits against their entry into public places such as shops, public restaurants, hotels and places of entertainment. Article 15 and its clauses empower the state government to create a just and equal society that provides a level playing field for all the people in the country irrespective of their colour, caste, creed or religion. In fact, Article 14, article 15 and article 16 are all interrelated in the constitution of India and talks about the right to equality.

There are certain special works that the government carries out to implement article 15, one of which is Scheduled Caste and Scheduled Tribes Prevention of atrocities act 1989. This act states that no person belonging to SC or ST category will be discriminated against or any violence undertaken against them just because they belong to that category. Another such act is the Hindu Succession Act 1956. This act empowers the state to criminalize the act of discrimination against women. Caste disabilities removal act 1850 is another act that was repealed recently by the central government of India.

Why is article 15 important?

It is not just the article 15 but articles 12 to article 18 wholly deals with the issues of right to equality in the constitution of India. Article 15 is of extreme importance to maintain equality and justice in the country. Article 15 has 5 clauses and each clause empowers the state and the individuals to prevent discrimination of people on the basis of race, religion, caste, gender or place of birth.

Article 5 (3) empowers the state to deal with protective discrimination which means it makes it possible for the state to reserve certain seats for women in government works. Article 15 (4) enables the states and empowers them to make certain special arrangements to promote harmony and welfare in socially, economically and educationally backward classes of our society which might include Schedule Caste and Scheduled Tribes. Article 15 (5) empowers the government to make reservations in educational institutions, government-aided and private aided companies. The only exception of article 15 (5) is the minority institutions.

There is a certain amount of criticism regarding article 15 (5) where reservation is made in educational institutions and governmental bodies. This reservation might create an atmosphere where equality and justice might not prevail because a student who has scored better marks might not get admission into a college as compared to a student with the reservation who has scored lesser marks who might get an admission into the college. This might further the rift between upper caste and lower caste in India. Article 15 is one of the most important articles in the Indian constitution which specifically talks about the right to equality in India. This article holds special value in a country like India because of its rich history of castism and discrimination.

Article 15 has five more clauses and in each clause, it empowers the state to elevate the law to prevent discrimination of its citizens on the basis of caste, creed, religion, race, gender or place of birth. This article says that no person shall be restricted on the above-ground mentioned to access public facilities such as hotels, entertainment parks, government bodies or shops.

Article 15 is a boon for minorities and less privilege section of our society who have faced discrimination and enslavement for thousands of years. If India really wants to move forward and become a just society, it has to take care of the lesser privileged sections of its society. 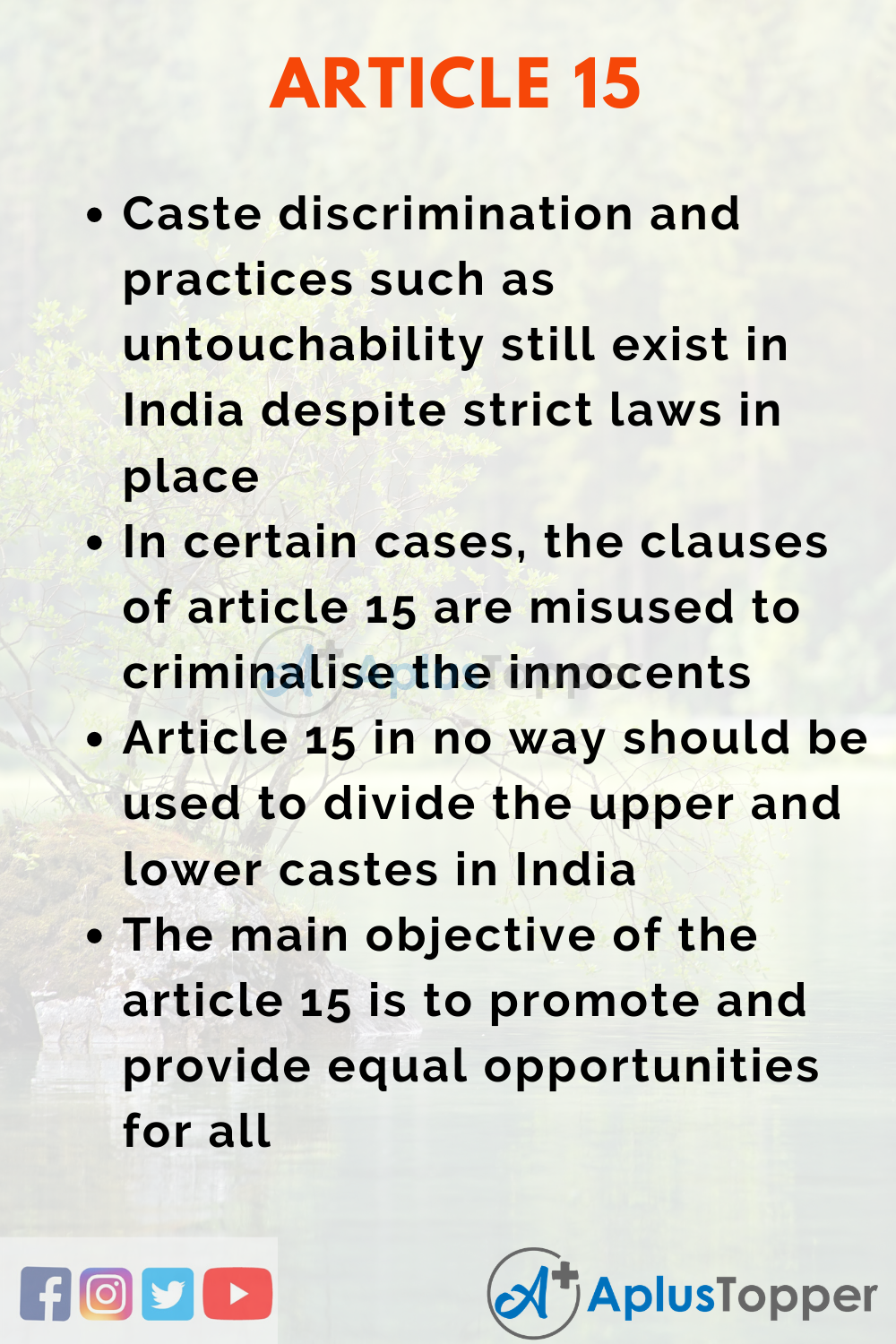 FAQ’s on Essay on Article 15 of Indian Constitution

Question 1.
What is article 15 of the Indian constitution?

Answer:
Article 15 empowers the state to prohibit discrimination of Indians on the basis of caste, religion, place of birth or gender

Answer:
Article 15 was drafted by B.R Ambedkar, the father of Indian constitution

Question 3.
Is CAA against article 14?

Answer:
Lawyers argue that the provision in the Citizen Amendment Act (CAA) might be against the values of our condition in accordance with the articles 12 to article 18

Question 4.
When was article 15 introduced?

Answer:
Article 15 was introduced in the year 1949