Essay on Amritsar: The city is located in the Punjab state of India. The city is situated at a distance of 28 kilometres from the border with Pakistan. The city has a population of more than 1,000,000 people. Amritsar is one of the most developed cities in India. It is one of the cleanest cities of India.

Everything about Amritsar is special. It’s known for its quality food items and monumental places. The city is the pride of Punjab, and it has a lot to offer to any person visiting it.

We are providing students with essay samples on a long essay of 500 words and a short essay of 150 words on the topic Rajkot for reference.

The city of Amritsar is well known for the Harmandir Sahib which is popularly known as “The Golden Temple”. The Golden Temple is one of the most essential and spiritual places for the Sikhs.

Anciently, Maharishi Valmiki who wrote the Ramayana used to reside in the city. It is believed that Maharishi Valmiki used to stay in the present day Bhagwan Valmiki Tirath Sthal which was formerly an Ashram for him. As per the Hindu Mythology, Lord Ram gave birth to his sons Lav and Kush in the same Ashram. The present-day Durigana Temple is believed to be the place where the “Ashvamedha Yagna” took place.

The great Sikh saint, “Guru Ram Das”, who was also the “Fourth Sikh Guru”, was the founder of the holy city Amritsar. It is said that Guru Ram Das bought the land from the villagers with the Sikh Donations in 700 rupees. The site was chosen by “Guru Amar Das”. He wished to build a town in the land which would have a human-made pool in the central part. After the coronation of Guru Amar Das in the year 1574, Guru Ram Das faced a lot of opposition from the sons of Ram Das. This was the time when Ram Das named the city “Ramdaspur”. The city started with the building of the pool which Amar Das always wanted. The city then expanded when Arjan provided donations for the growth and development of the city.

The town gained the name of Amritsar when Ram Das’s son built the Harmandir Sahib, and the pool area was converted to the temple complex. The sculpture of Sikhism was installed in the temple in the year 1604.

During the monarchy of the Sikhs, Maharaja Ranjit Singh decided to fortify the city in the year 1822. The work started with the building of a wall at the “Katra Maha Singh area”. The construction of the town was then continued by Sher Singh when he added 12 gates in the city and a fort named Dhoor Kot.

In the year 1849, when India was under British rule, they built the 13th Gate and named it the “Hall Gate”. The Jallianwala Bagh massacre also took place in the same city under British government in which numerous Sikhs were killed on the festival of Vaisakhi on the orders of “General Dyer”.

Amritsar is also known for both its street foods as well as homemade items which include Chole puri and pinni, Amritsari lassi and Amritsari fish tikka. 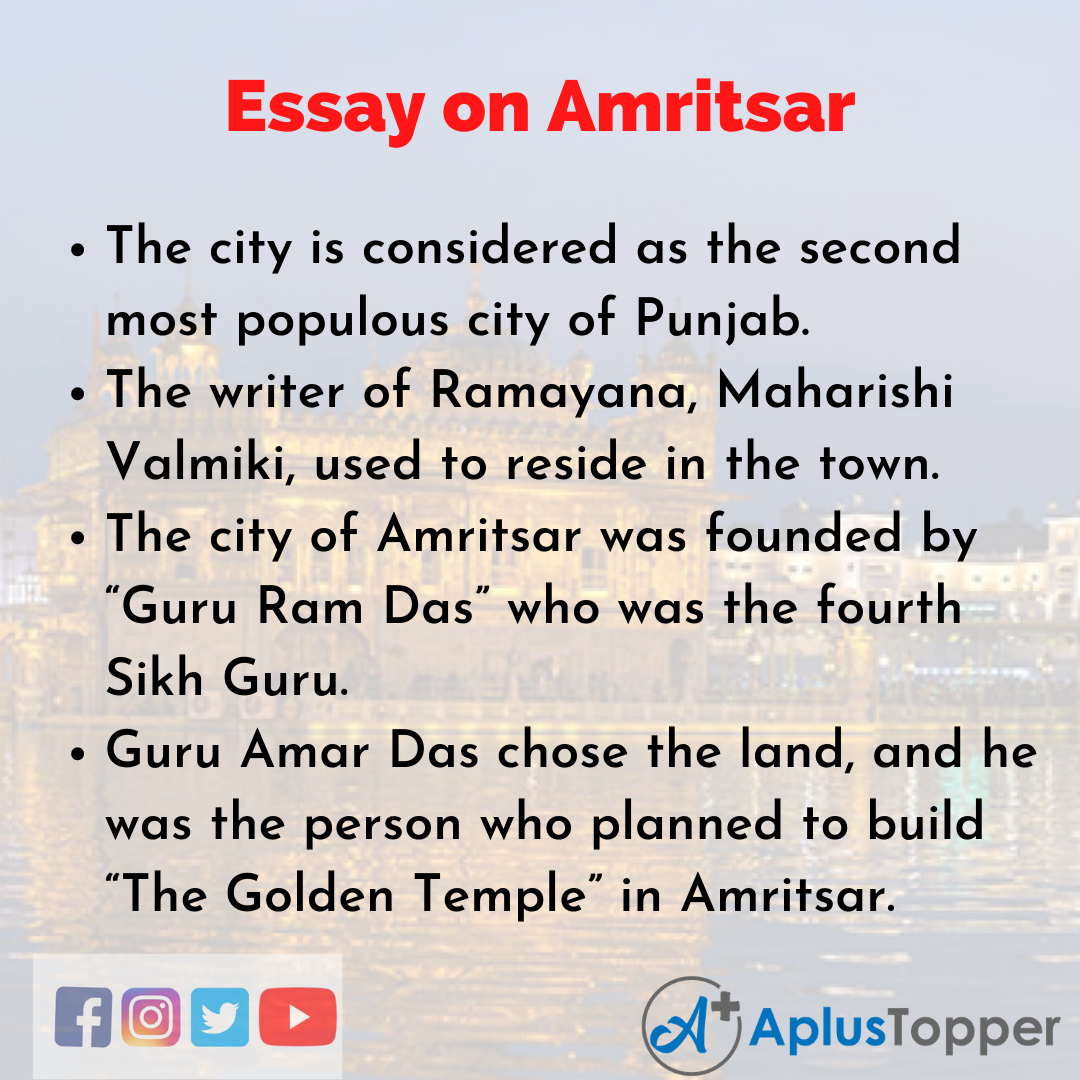 Amritsar is one of the most developed cities in India. The city is ranked as the second-largest populous city of Punjab. Amritsar is mainly famous for “The Golden Temple”. Amritsar was the ci5ty which witnessed “Operation Blue Star” which was conducted by the Indian Prime Minister to remove the Sikh Militants from the Golden Temple.

The citizens of Amritsar speak languages like Punjabi, Hindi and Urdu. The total area covered by the city is around 280 square kilometres. The distance of Amritsar from Chandigarh is 455 kilometres.

Amritsar lies 232 kilometres above the sea level, and hence it faces as little rainfall every year. The average annual temperature of Amritsar is 23.3 Celcius. The city is known for a lot of historical events that took place in the city. Amritsar is known for its top-class food items such as Amritsari lassi, Chole puri and pinni, Amritsari fish tikka, Langar and Karah Prasad, Mah kid al and Mutton Chaap.

10 Lines on Amritsar Essay in English

1. The city is also known as the “Guru Nagri”.
2. The city is considered as the second most populous city of Punjab.
3. The writer of Ramayana, Maharishi Valmiki, used to reside in the town.
4. The city of Amritsar was founded by “Guru Ram Das” who was the fourth Sikh Guru.
5. Guru Amar Das chose the land, and he was the person who planned to build “The Golden Temple” in Amritsar.
6. The present-day Durigana Temple is believed to be the place where the “Ashvamedha Yagna” took place.
7. During the Sikh rule, the city was fortified by Maharaja Ranjit Singh.
8. Ancient ruler added 12 gates in the town and built a fort named Dhoor Kot.
9. The thirteenth Gate was added by the British during the rule of East India Company, and the Gate was named as “Hall Gate”.
10. The Jallianwala Bagh massacre took place in an Amritsar on 13th April 1919 during the festival of Vaisakhi. 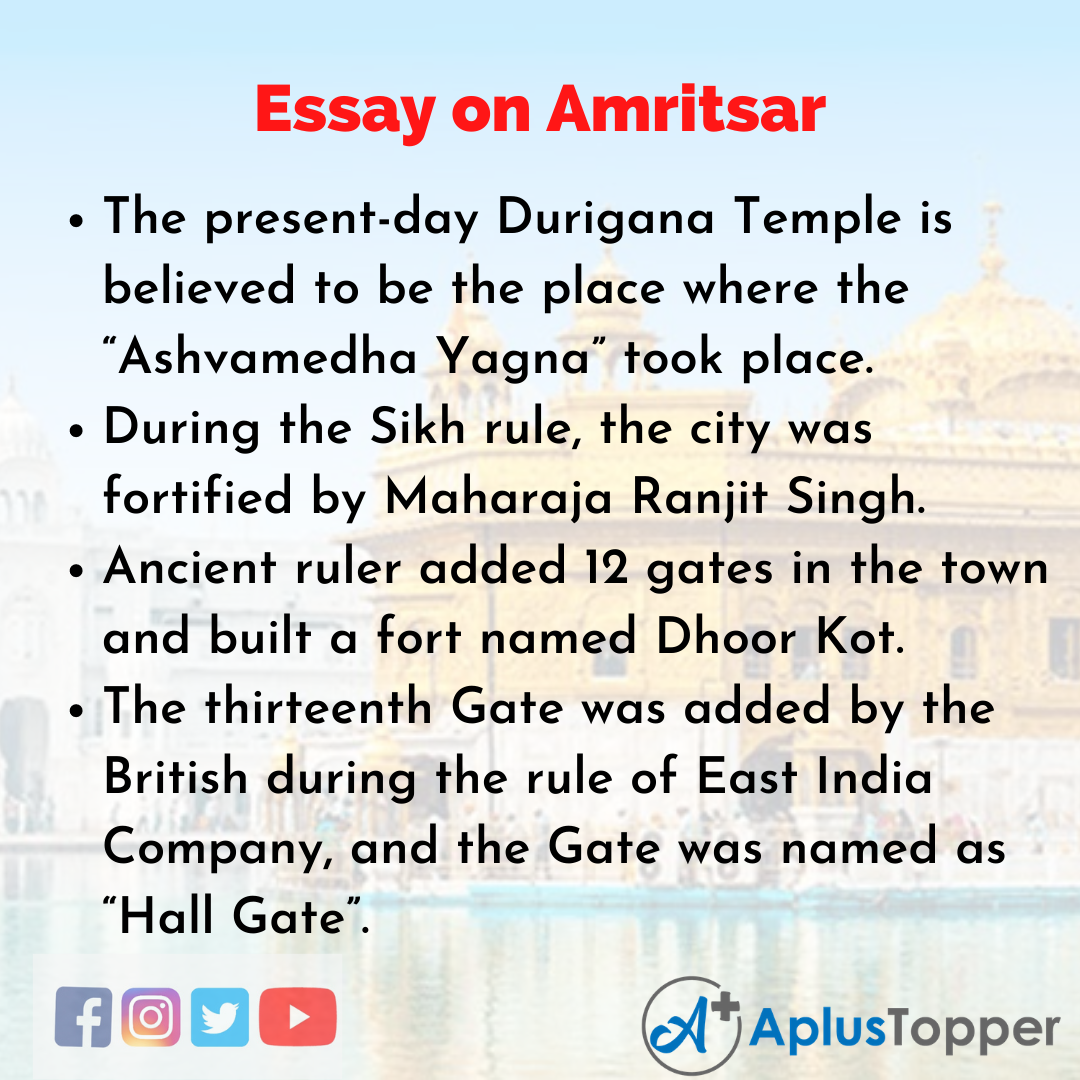 Question 1.
Where did Maharishi Valmiki stay?

Answer:
Maharishi Valmiki used to reside in the present day Bhagwan Valmiki Tirath Sthal which was formerly an Ashram to him.

Question 2.
Who was the founder of the city?

Answer:
Guru Ram Das, who was the fourth Guru of Sikhs, was the founder of Amritsar.

Question 3.
Who proposed the idea of building “The Golden Temple”?

Answer:
It was the idea of Guru Amar Das to build the Golden Temple with a human-made pool in the central part of the city.

Question 4.
What are the famous food items of Amritsar?