Essay on Agra: This city is situated on the river Yamuna banks in Uttar Pradesh. It is one of the most renowned cities across the country. This city is filled with exquisite monuments belonging to the period of the Mughal Kingdom. This city also houses the most popular Taj Mahal, which is known to be one of the seven wonders present globally.

We provide students with essay samples on a long essay of 500 words and a short essay of 150 words on the topic Agra for reference.

The popularity of Agra is high across the globe. It comes under the state of Uttar Pradesh. This city is situated at a distance of 206km from the capital of Uttar Pradesh. It is a quite charming city with the presence of several historical monuments and places.

This city attracts visitors from across the world. Some of the best monuments present in Agra are Agra Fort, Taj Mahal, Fatehpur Sikri, etc. This city is also popularly referred to as “Akbarabad” or the “Taj City.”

Agra has a diverse culture that began from the rulership of the Mughal Empire. The period under the rulership of the Mughal Kingdom is referred to as the golden age. Since many constructions were happening in this particular period. The foundation of the Aram Bagh took place in this period. It is a popular garden present in Agra today. The meaning of the name Aram Bagh is “Garden of Relaxation.”

To improve the city, Babar and his grandson, Akbar, put in a large amount of work. After attaining freedom, Agra stood out as the smartest and elegant cities in India.

Furthermore, there are numerous festivals celebrated by the people in Agra. The festivals include Diwali, Christmas, Eid, Taj Mahotsav, Kailash Fair, and so on.

Agra is known to be a city filled with an atmosphere of jolliness and is also known as the symbol of love. The primary sign of love is the Taj Mahal situated in Agra since it was established by Shah Jahan to express his love towards his Begum Mumtaz.

This city is also known to appeal to a large number of tourists. Also, it is considered impossible to create an identical architecture style like the Taj Mahal in the current world, even with all the constant development.

Agra is known to have a different type of climate in comparison with other cities. It includes the monsoon season, although the season of rainfalls is not quite heavy as they are in other countries.

Furthermore, the climate is very hot and dry in summer, whereas it has a mild temperature during winters. Thus, it is stated to be the hottest place in India. The temperature is known to have gone up to 50 degrees in the summer season.

Although the nights in this particular season are normally cooler in comparison with the day. Since the temperature during the night is normally 30 degrees. Therefore, it is an ideal choice to visit the city in the winter season.

There are numerous prestigious colleges, universities, and schools present in Agra. It is known as the centre of education. Many colleges and universities offer education to their students, enabling them to grow their careers further.

Also, the medical college situated in Agra is one of the most popular across the state. This college is present right beside the Sarojini Naidu Hospital.

The engineering college named Dayal Bagh is also widely known in the city. It is easy to find several renowned hospitals in the city that offer high-quality services that ensure people’s health. 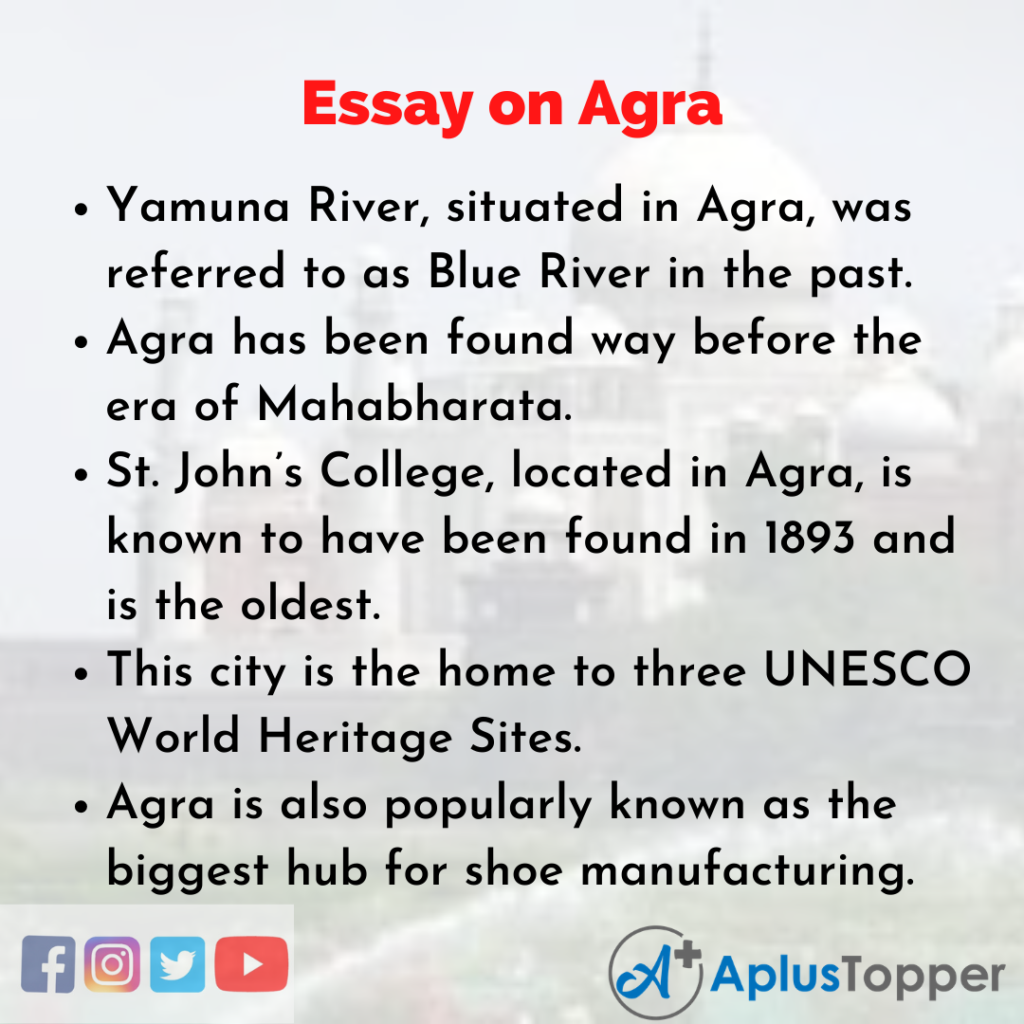 Agra is a city located in the state of Uttar Pradesh. This city is situated on the Yamuna river’s bank. This city is about 128 miles away from the capital of India, New Delhi. It ranks 4th among the most populated cities of the U.P.

The first ruler of Delhi, named Sikandar Lodi, was the first to move the capital to Agra from Delhi in 1504. Thus, he is known as the founder of this city. Agra is well-known among tourists from all over the world due to the presence of various historic buildings.

These Mughal era buildings include Fatehpur Sikri, Taj Mahal, and Agra Fort. All these buildings are included in UNESCO Heritage Sites of World. Out of all the historic buildings, the Taj Mahal is considered one of the most prominent and exquisite buildings globally. Thus, people from every country come to Agra to visit the Taj Mahal.

10 Lines on Agra in English

1. Yamuna River, situated in Agra, was referred to as Blue River in the past.
2. Agra has been found way before the era of Mahabharata.
3. St. John’s College, located in Agra, is known to have been found in 1893 and is the oldest.
4. This city is the home to three UNESCO World Heritage Sites.
5. Agra is also popularly known as the biggest hub for shoe manufacturing.
6. From the year 1556 to 1648, Agra was the capital of the Mughal Empire.
7. Agra was referred to as the hub of Islamic Education in the era of the Mughals.
8. Taj Mahal is admired across the entire country for its elegance and exquisiteness across the world.
9. Red Fort is a very popular monument present in Agra.
10. Fatehpur Sikri, situated in Agra, is known to be the first planned town of the Mughal. 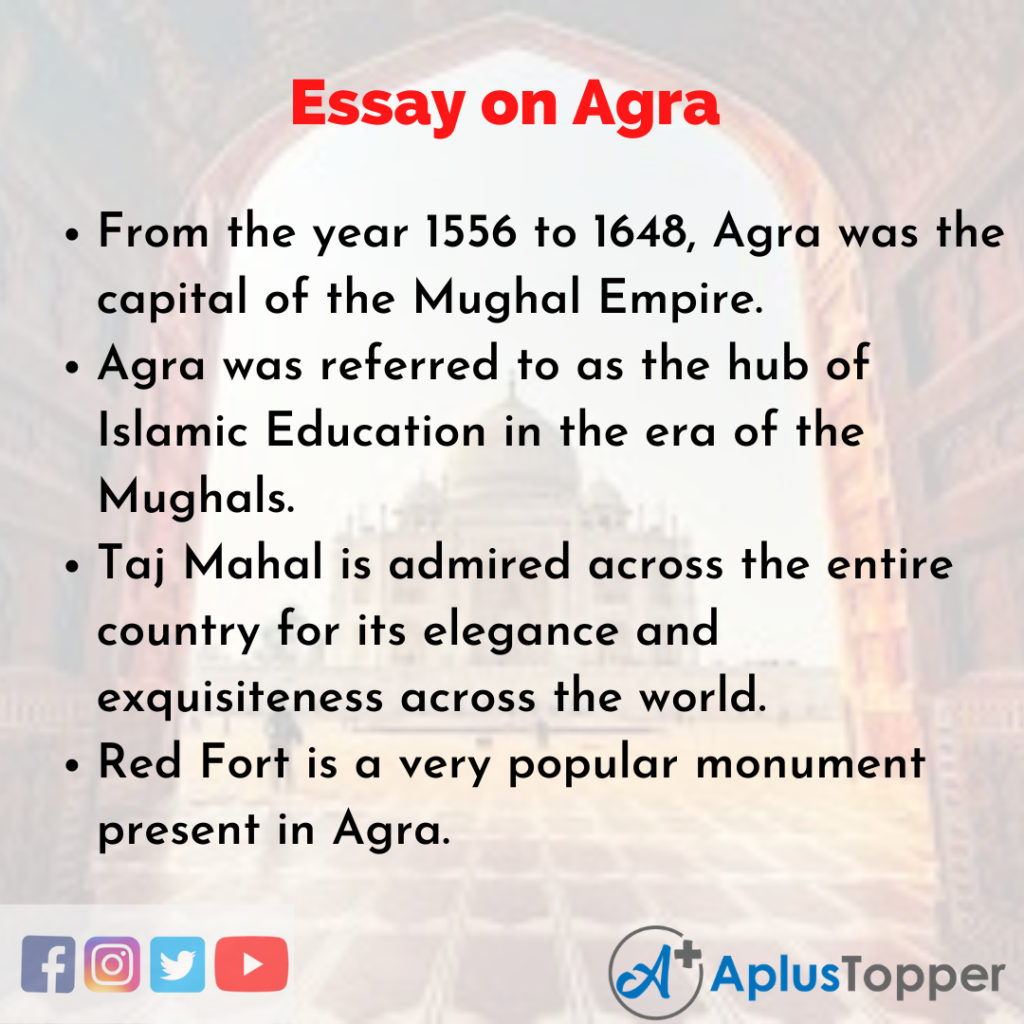 Question 1.
Which months are suitable to visit Agra?

Answer:
It is a great time to travel between October to March due to the pleasant climate.

Question 2.
What are the famous foods available in Agra?

Answer:
The foods such as Dalmoth, Petha, Bedai, Bhalla, etc. are famous in Agra.

Question 3.
Which are the most popular places in Agra?

Answer:
Agra has some of the best places, like the Taj Mahal, Itmad-ud-Daula, Agra Fort, etc.

Question 4.
Why is Agra well-known in the country?

Answer:
Agra is known for its diverse and variety of culture and its great transportation services.