Essay on Abraham Lincoln: It’s a sincere quote coming from a man who exemplified it through his own life. Self-educated, self-made, he echoes the poor boy made good theme in American politics. His rise from obscurity to fame is tremendous. Scholars rank him among the top three US Presidents, with most of these surveys placing him at number one. – A True Champion of Democracy

“In the end, it’s not the years in your life that count. It’s the life in your years.” -Abraham Lincoln

Truly, Abraham Lincoln had the charisma to let the world fall at his feet.

Below we have given a long essay on Abraham Lincoln of 500 words is helpful for classes 7, 8, 9 and 10 and Competitive Exam Aspirants. This long essay on the topic is suitable for students of class 7 to class 10, and also for competitive exam aspirants.

Born on 12th February, 1809 as the second child to Thomas Lincoln and Nancy Hanks, two uneducated farmers in a one room log cabin in Sinking Spring farm in Kentucky, young Lincoln had humble roots.

Lincoln’s paternal grandfather, Abraham, whom Lincoln was named after, had moved his family from Virginia to Kentucky. His parents belonged to a Baptist Church and had pulled away from a larger Church because they refused to support slavery. Thus, from a very young age he was exposed to anti-slavery sentiment.

At a very young age of 9 years, his mother passed away due to milk sickness. His older sister Sarah took to looking after him until their father remarried in 1819, but she too died during child birth in her late 20’s . His father then remarried and Lincoln became close to his step mother Sarah Bush Johnston.

Lincoln began his political career in 1832, at the age of 23, with an unsuccessful campaign for the Illinois General Assembly as a member of the Whig Party. In 1834, he won the election to the State Legislature and after coming across the commentaries on the laws of England, he taught himself law. After developing a reputation as a formidable adversary during cross examination of witnesses and in closing arguments, Lincoln became one of the most respected and successful lawyers in Illinois. In 1836, he was admitted to the bar and started practising law under John T Stuart. In 1837, he made his first protest against slavery in the Illinois House which later lead to the abolition of slavery.

In 1851, he represented Alton and Sangamon Railroad in a dispute and the original charter was modified in public interest to provide cheaper, superior route. Slavery was still prevalent, as it was legal.

The Kansas-Nebraska Act of 1854, which repealed the limits on the spread of slavery drew Lincoln back into politics. On 27th February, 1860, New York Party leaders invited Lincoln for a speech to a group of republicans. He didn’t have a flattering appearance, yet Noah Brooks, a journalist, said:

“No man ever before made such an impression on
his first appeal to a New York audience.”

Lincoln’s supporters described him as the ‘Rail Candidate’. He was named so because of his humble background. Before Lincoln pursued law and politics, he used to do several odd jobs to earn money and one of them was the job of a rail splitter. He was a candidate for the ‘common man’.

Lincoln was steadily strengthening his position in politics. He entered the presidential nomination process as a distinct underdog and was eventually chosen as the Republican candidate for the 1860 election. Finally, on 6th November, 1860, Lincoln was elected the 16th President of the United States.

Lincoln’s major contribution as President was that he helped preserve the United States integrity and sovereignty, by leading the defeat of the secessionist confederacy in the American Civil War. He borrowed and studied Henry Hallock’s book, Elements of Military Art and Science’, to be aware of technical military terminologies. Moreover, he introduced measures that resulted in the abolition of slavery.

He issued his Emancipation Proclamation in 1863 and promoted the passage of the 13th Amendment to the Constitution in 1865. This eventually led to negation of slavery in the United States. However, anti-war leaders criticised him for refusing to compromise on slavery. On the other hand, radical republicans, criticised him for moving too slowly in abolishing slavery. 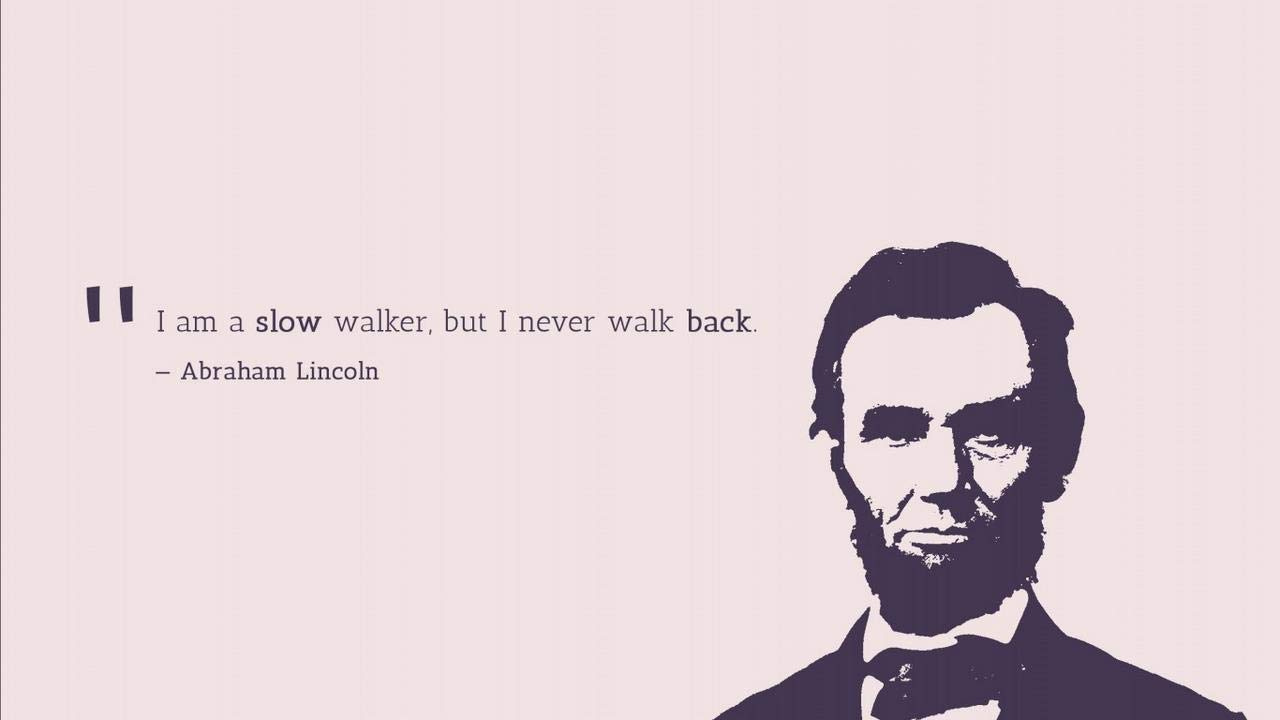 Below we have given a short essay on Abraham Lincoln is for Classes 1, 2, 3, 4, 5 and 6. This short essay on the topic is suitable for students of class 6 and below.

Lincoln was a very strong orator. He rallied public opinion through the powerful rhetoric of his messages and speeches. His Gettysburg address is remembered as a prime example. At the close of the Civil War, Lincoln took a moderate view of reconstruction, seeking to speedily re-unite the nation through a policy of generous reconciliation.

Reconstruction began during the war as Lincoln and his associates pondered the questions of how to reintegrate the Southern states back into the Union and what to do with Confederate Leaders and the freed slaves.

Other than this, his achievements also included his brilliant handling of the factions of the Republican Party by bringing the leaders into his cabinet and forcing them to cooperate. In crisis management, he defused a war scare with the United Kingdom (1861). He also managed his own landslide re-election in 1864.

All was going well till this time. Lincoln was popular with people and had just been re-elected as the President. But a sudden turn of the wheel of fortune led to his assassination. Lincoln left to attend the play ‘Our American Cousin’ at Ford’s theatre on 14th, April 1865, Good Friday. His assassin, John Wilkes Booth, a well known stage actor fired at him and Lincoln embraced death soon after.

A truly rags-to-riches tale, Lincoln’s assassination in 1865 was the first in US history, though an unsuccessful attempt had been made 30 years earlier on Andrew Jackson. Booth’s co-conspirators wanted to eliminate the top three people in the administration so that the Government crumbles. The funeral and burial ceremony was a period of nationwide grief and mourning. A great visionary, a champion of the rights of the downtroddon, he showed the world the road to an enlightened future.