Essay on A Visit To A Historical Place: India is a country of rich culture and has centuries of history and tradition of its own. Thus, the country is full of places which are rich in traditions, are important historically, economically, politically or sociologically. Moreover, the diversity that it presents baffles many because the diversity is not only geographical but social and cultural as well. Thus, India attracts thousands of tourists from all around the globe.

Below we have given a long essay on A Visit To A Historical Place of 500 words is helpful for classes 7, 8, 9 and 10 and Competitive Exam Aspirants. This long essay on the topic is suitable for students of class 7 to class 10, and also for competitive exam aspirants.

Last year, I had a chance to visit Agra with my uncle’s family. As soon as I got the invitation, I accepted it because Agra has been a great centre for art and architecture from the Mughal period. It goes to Akbar’s credit to transform Agra into a great city of cultural and historical importance. Interestingly, these monuments have the depictions of both Hindu and Islamic cultures and architectures.

History stands testimony that the old brick fort of Sikandar Lodhi was dismantled by Akbar and a magnificent fortress of rust coloured sandstone was built. For the same reason, the ‘Fort of Agra’ is also known as ‘Lai Quila’. This fort was built by Akbar, in AD 1565. It took 8 years to be completed.

The fort is said to have 500 buildings in the style of Bengali and Gujarati architecture. This is what Akbar’s historian Abul Fazal had recorded. But unfortunately only a few survive today and the successors of Akbar too subsequently made a few changes and additions. The fort stands on the banks of the river Yamuna with double walls to protect it. These walls are very high.

The fort has four gates. Presently, the entry to the fort is allowed through the gate in the South of the fort called the Amar Singh Rathore Gate. Just outside the gate is a stone statue of a horse’s head built by Amar Singh Rathore of Jodhpur in remembrance of his faithful horse that had jumped the walls of the fort and lost its legs in order to save its master.

The gate on the West side of the fort is called the Delhi Gate at whose entrance are the famous statues of Jamal and Patta who had laid down their lives fighting for Akbar. The space between the fort and the river was used for holding elephant fights.

Right behind is Akbar’s majestic Palace, the roof and floor of which are made of red stone. The Diwan-e-Aam of the Palace was the place where he held his Darbar and dispensed justice. We also saw the Diwan-e-Khas and the Machhli Bhavan. Close to the Diwan-e-Aam is the Meena Bazaar. To the West is the building which is a very curious kind of a Hide and Seek building.

It is said ithat Akbar was indebted to the blessings of Sufi of Sikri, Sheikh Salim Chishti for the birth of his son. Therefore, in order to show his gratitude, Akbar built and developed Sikri and decided to shift his capital there. The place is 40 km to the South-West of Agra. He named it as Fatehpur Sikri. The buildings at Fatehpur Sikri are outstanding in their carvings.

There is an Ibadat-Khana built for holding discussions on matters of religion. But the crowning glory of the city is the Jama Mosque which can accommodate 10,000 worshippers and is believed to be the replica of the Mosque at Mecca.

It is a monumental example of a mixture of Persian and Indian styles. Inside the Mosque is the tomb of Sheikh Salim Chisti. Right at the entrance of the Mosque is the famous Buland Darwaza which is 41 metres high from the ground level. Other structures to see at Fatehpur Sikri are the Panch Mahal, Jodha Bai’s Palace, the Sunhera Makan and many other buildings. 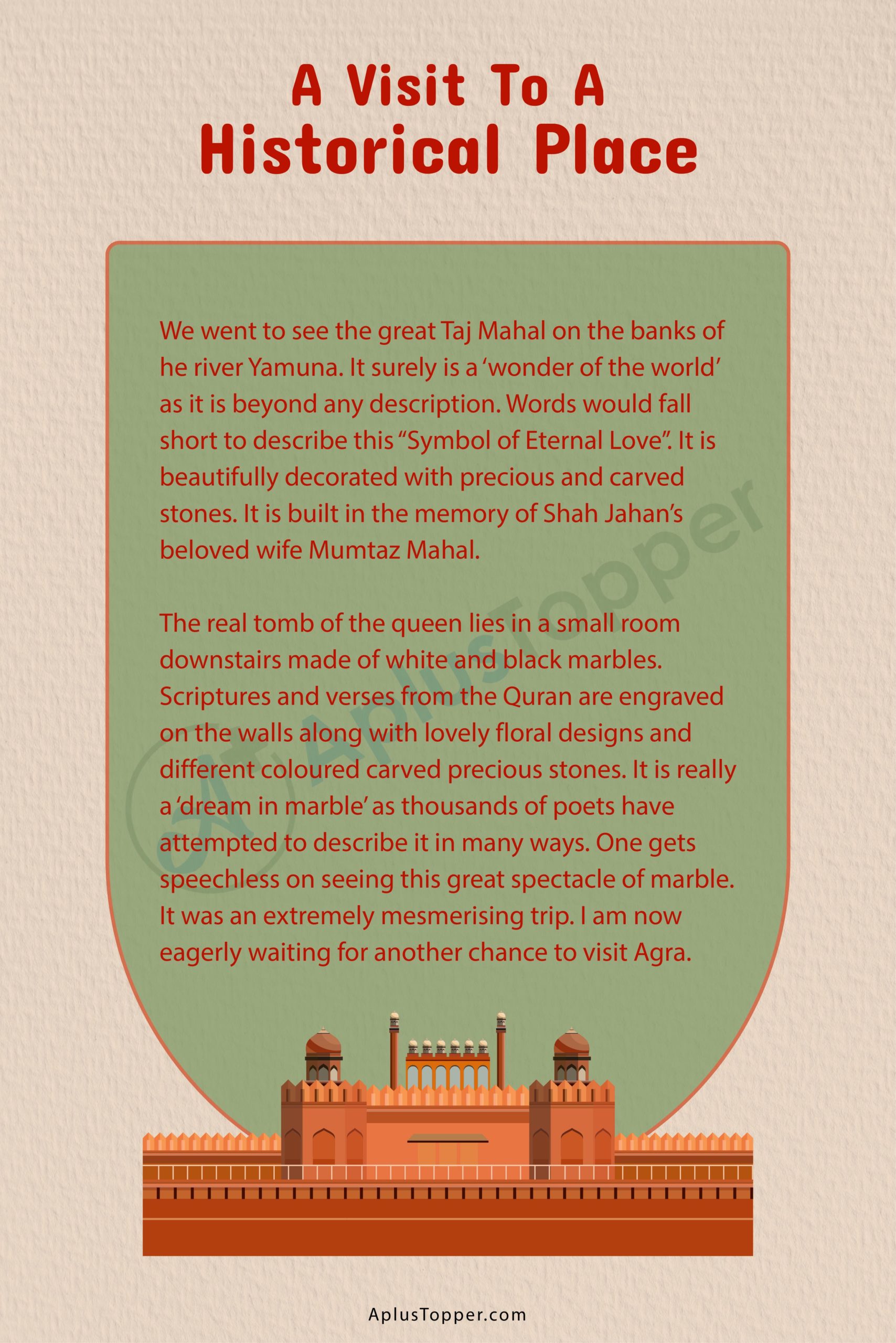 Below we have given a short essay on A Visit To A Historical Place is for Classes 1, 2, 3, 4, 5 and 6. This short essay on the topic is suitable for students of class 6 and below.

We went to see the great Taj Mahal on the banks of the river Yamuna. It surely is a ‘wonder of the world’ as it is beyond any description. Words would fall short to describe this “Symbol of Eternal Love”. It is beautifully decorated with precious and carved stones. It is built in the memory of Shah Jahan’s beloved wife Mumtaz Mahal.

The real tomb of the queen lies in a small room downstairs made of white and black marbles. Scriptures and verses from the Quran are engraved on the walls along with lovely floral designs and different coloured carved precious stones.

Its overall architectural brilliance is still a question for modern builders and architects. They get really surprised to see the fullproof plan of the Taj Mahal built at the time when technology was not that much advanced. It’s extra-ordinary beauty also made us utter ‘Waah Taj!’ However, just one thing that pinched me was how recklessly people have ruined this historic beauty. But our government has taken the right step at the right time by relocating the factories far off from the Taj Mahal. It was thus an overall enriching and enlightening experience to visit these places.

It is really a ‘dream in marble’ as thousands of poets have attempted to describe it in many ways. One gets speechless on seeing this great spectacle of marble. It was an extremely mesmerising trip.

Since then Agra and Fatehpur Sikri have become my favourite destination to spend my vacations. I am now eagerly waiting for another chance to visit Agra.