English as a Global Language Essay: Across the globe, domestic and international communication has expanded, and that’s the reason why there is a need for a global language English which has become the lingua franca in major parts of the world.

English is one of the world’s most dominating language, having an impact on every field of work. Although with the positive outcomes, the negatives outweigh them to some degree as it means that many languages will perish out as a result.

We provide children and students with essay samples on a long essay of 500 words and a short essay of 150 words on the topic “English As A Global Language” for reference.

Long Essay on English as a Global Language is usually given to classes 7, 8, 9, and 10.

There are arguments that languages have a strong link between dominance and cultural power. The main factor that the languages exist is because of a powerful power-base, political and military or economic. The language itself was derived from languages such as German, Latin, French and other European countries. Linguists argue whether the simplicity of the English language is the main reason for it becoming a global language.

Generally, difficulty level varies from person to person, and there are different factor involving when a person is starting to learn a language. While learning another language, one can observe that some languages appear to be more difficult than others. Some languages have many similarities in pronunciation and words. For example, Greek has similarities with Italian. Then, there are languages having rough pronunciation or spelling and are dissimilar to any other language, such as German.

English is a very effective language, and that it’s proved by the many native and non-native speakers worldwide. Statistics show nearly a one-fourth of the world is already fluent or content in English. Though the number of native Chinese speakers are greater, Chinese is still not the global language is because of its complicated letter system, grammar and spellings. Thus for a language to become a global language has little to do with the number of native speakers.

Furthermore, English helps to express various meanings. It has a lot of words with different meanings and different types of syntax, helping the speaker to express with great accuracy. Another factor that makes English efficient is its compact letter system. It’s unlike Chinese with 10000 letter writing system which is very difficult for most people. Moreover, the English language is very phonetic, rather than character-based. Hence it can help to describe the actual sounds of words or phrases.

A poor feature of the English language is, there could be words with similar sounds but with a different meaning, which can confuse non-native speakers. Another difficulty in English is different regions of native English speakers have their accent, which makes a non-native or a beginner learner of the language, not to understand them clearly. Non-native speakers also have their specific accents.

Since English is so widely spoken, many have taken up English as their second language. English has allowed a common communication means between people of different backgrounds. Hence, English has helped to diminish certain cultural barriers between nations. However, there are cultural differences between countries and nations. In India, which has thousands of local languages, English is used as the official language as a smooth communication mean.

Though English is an important language, we should never assume that its superior to other languages. Each nation should consider their language as being important to them. To sum up, English can be regarded as a global language, but it cannot be considered superior to other languages. Every single language has its special characteristics, ways of expression and it should be preserved and celebrated. 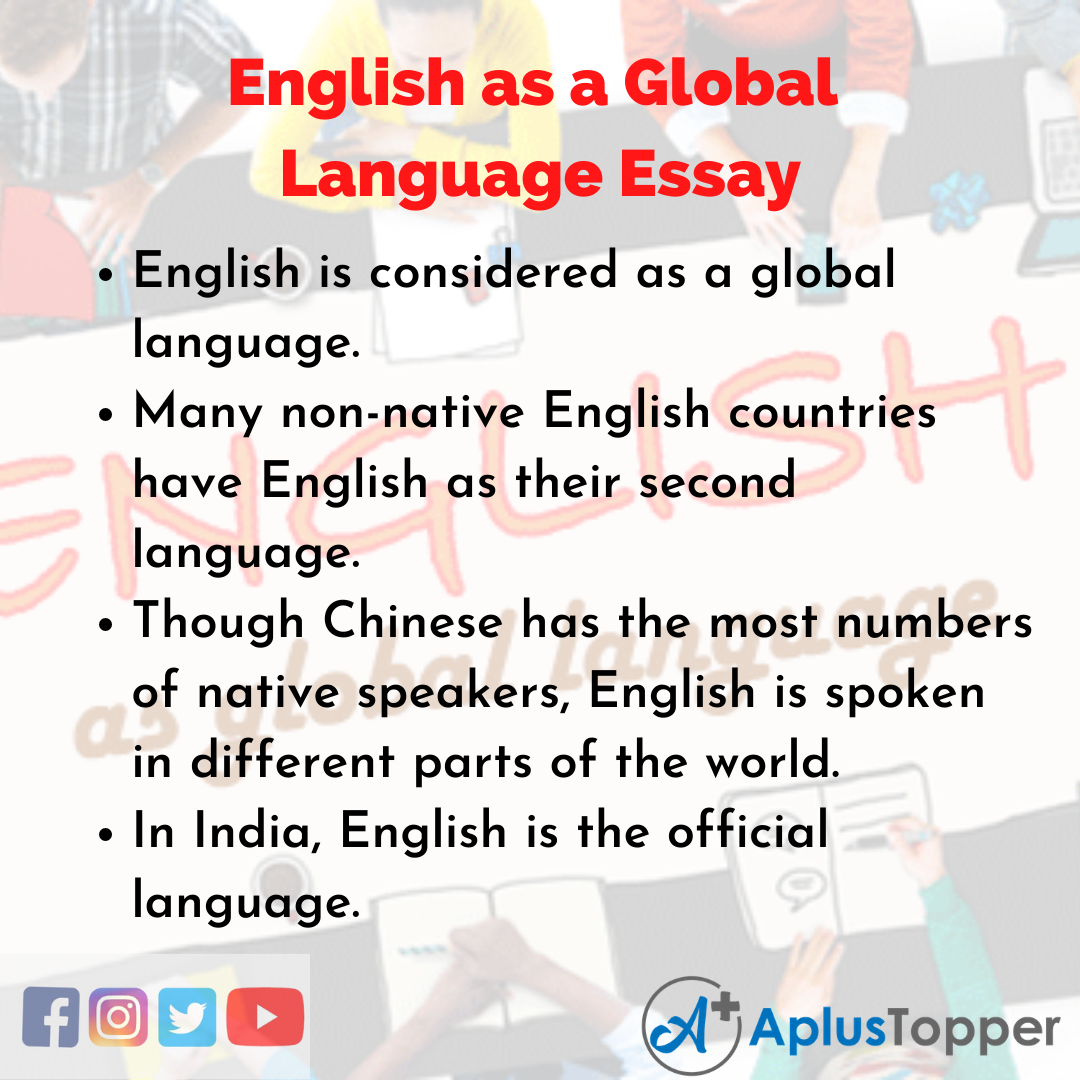 As global communication expands worldwide, so does the need for a global language. English is a language that is used to communicate in many parts of the world.

English is not only used as a mere casually communication tool, but it is also used in business, diplomatic policies, tourism, in entertainment and educational sectors, and to communicate between two non-English native nations. English is used everywhere.

In this age of globalization, countries like China, Japan and Russia, who have passionately sustained and promoted their language, have today accepted the importance of the English language.

In India, English is an official language used to communicate between different states having their language. It has become a medium of instruction in educational institutions. For higher education (e.g. medicine, engineering), only English is used to teach.

Though English is a relatively easy language and is used as a global communication tool, one must never disregard their native language. We should all preserve our language, culture and heritage even if we learn English.

10 Lines on English as a Global Language in English 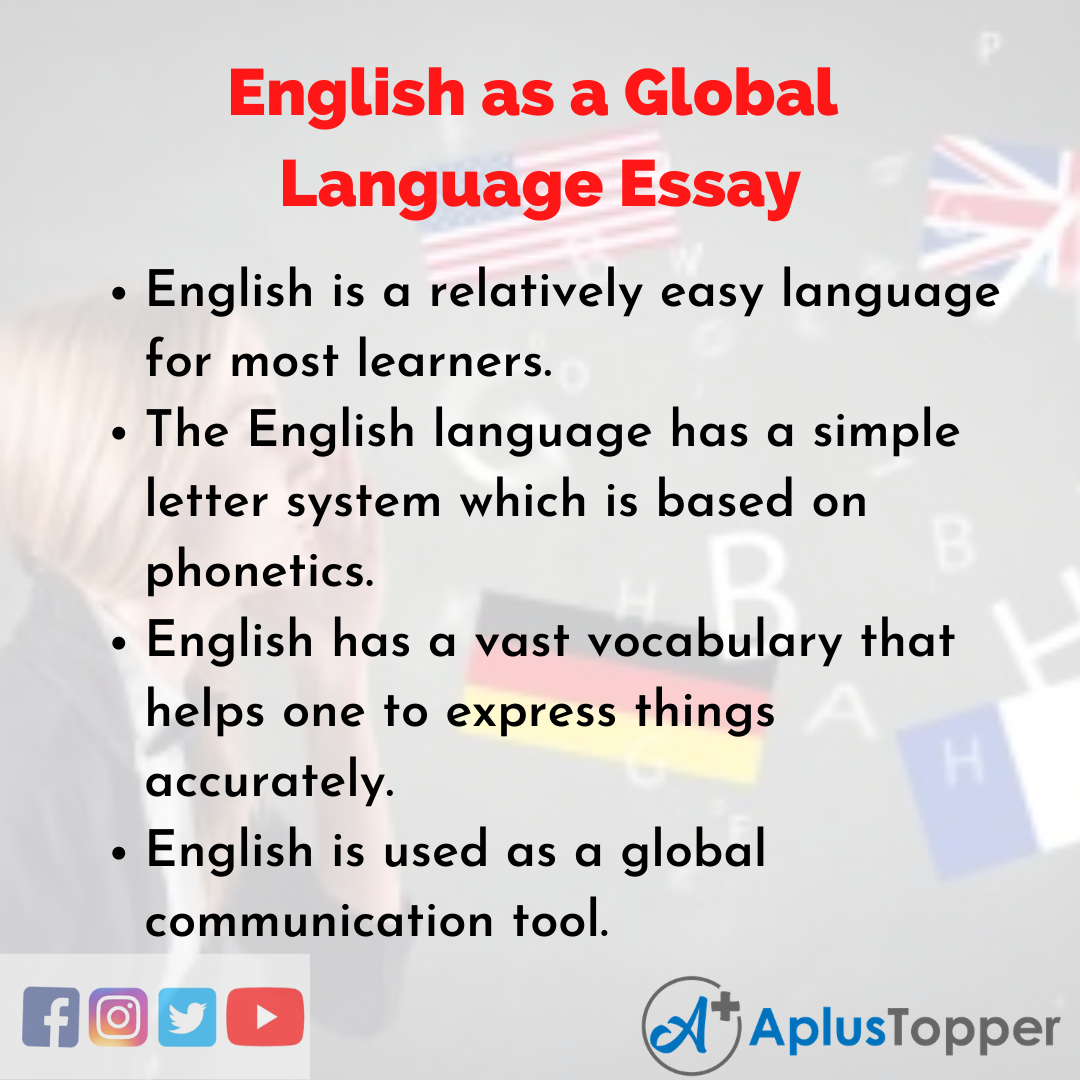 FAQ’s on English as a Global Language Essay

Question 1.
Why English is a global language?

Answer:
It is not only due to the British colonialism and the American imperialism, but also its flexibility and adaptability. Its also because of the economic power of the native speakers. So English has got a global status language.

Question 2.
How the English language became a global language?

Answer:
By the late 18th century, the British Empire had spread English through its colonies and geopolitical dominance.

Question 3.
Does English have the most numbers of native speakers?