In the 21st if we are to look around in our society, we will see most of it displays several marvels of engineering, which shows why it is an important discipline. The field of engineering consists of a vast sea of knowledge whose boundary is infinite. And through the discoveries and breakthroughs made by engineers almost every day, the expertise and information keep growing.

Society has given engineers various nicknames like problem solvers, organizers, designers, human calculators, and communicators because of the highly creative activities. The most amusing fact about the engineering discipline is that the evidence of its applications dates back to the ancient stone ages. The discoveries made in those primitive days were like the invention of wheels, carts, the building of huts, pulleys, etc.

There has been a significant role in engineering since when human civilization had started. The evidence from ancient Harappa and Mohenjodaro civilizations show that it had a planned layout of the street grids along with equal-sized buildings, structural city division for commercial purposes, well-planned drainage system, etc., which are all considered to be very advanced civil engineering activities for the period of the civilization.

As we proceed further down the timeline, we have witnessed several other civil engineering wonders like the great pyramids, Great Wall of China, Taj Mahal, etc. Engineers from places like Japan, where earthquakes are common, found a way to withstand natural disasters by building shock-proof structures, and such inventions have saved a million lives. Ancient Greeks made machines for civilians, military, and as well as commercial purposes.

Transportation is another great wonder in the contributions of engineering made to humankind. Using transportation devices, we have voyaged into outer space and reached the moon as well. And vehicles are such inventions which have certainly made the commute a whole lot easier.

Earlier, the engineering field only consisted of core branches that specialized in individual departments of work, and the divisions were Mechanical, Electrical, and Civil. But eventually, with much more advanced and discoveries in the field of technology and a combination of engineering with other areas of study, some more branches of course under the engineering field became popular. Among them, a few Engineering branches to name are Computer, Aerospace, IT, Electronics and Communication, Electronics and Instrumentation, Biomedical, Chemical, Textile, Petroleum, Food Technology, etc.

In an age where society is highly dependent on technology, especially on electronic devices and the internet, a modern-day software engineer is expected to be tech-savvy and able to solve a range of various problems related to commuting programs. They are also likely to help verify designs and predict structures/devices’ behavior in different environments.

The main objective of engineers and engineering is to benefit humankind by making life and living easier. The contributions of engineering cannot be summed up into a few words. Still, the right way to respect their immense role in society is by recognizing and using their inventions responsibly. Engineering always has and will continue to strive to lift our living standards through sustainable developments and considering conditions to protect our Earth’s environment at all costs. 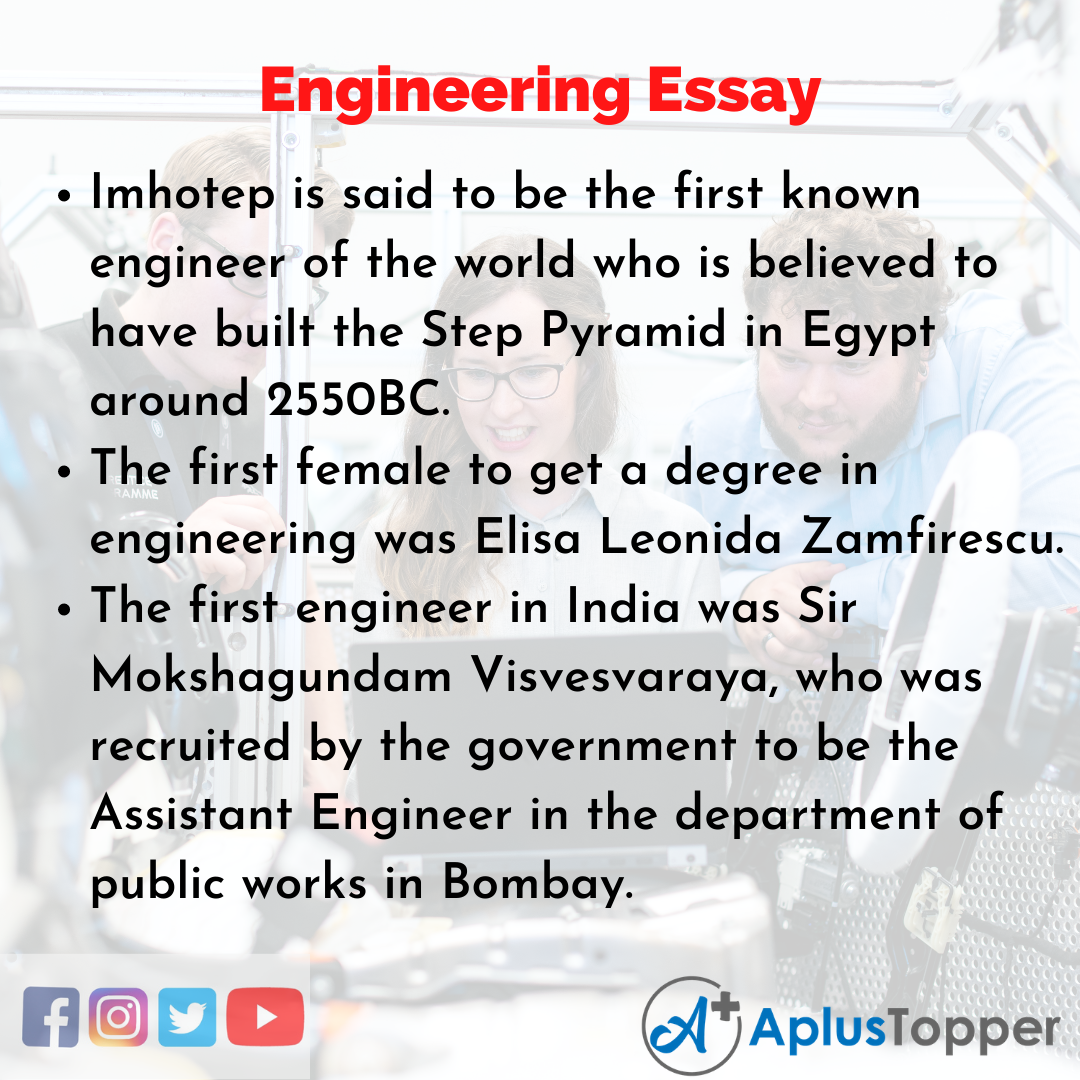 The world filled with human-made machines, structures, and devices was potent enough to raise a curiosity in the little mind of mine when I was a child. I often wondered and questioned the procedures behind how the machines operated.

To be the inventions and discoveries made by man in the field of engineering felt majestic. And if I didn’t get logical answers to my doubts, I could have easily mistaken the wonders of engineering to be established using magical spells. Even though I have come a long way in life, I still believe engineers are nothing less than magicians, for they are who have or can give you a solution for almost every problem. One should take a glimpse around them in a room and outside I can assure you will find very few things not relying to a certain degree of engineering upon, which makes this field of study so remarkable.

10 Lines on Engineering in English 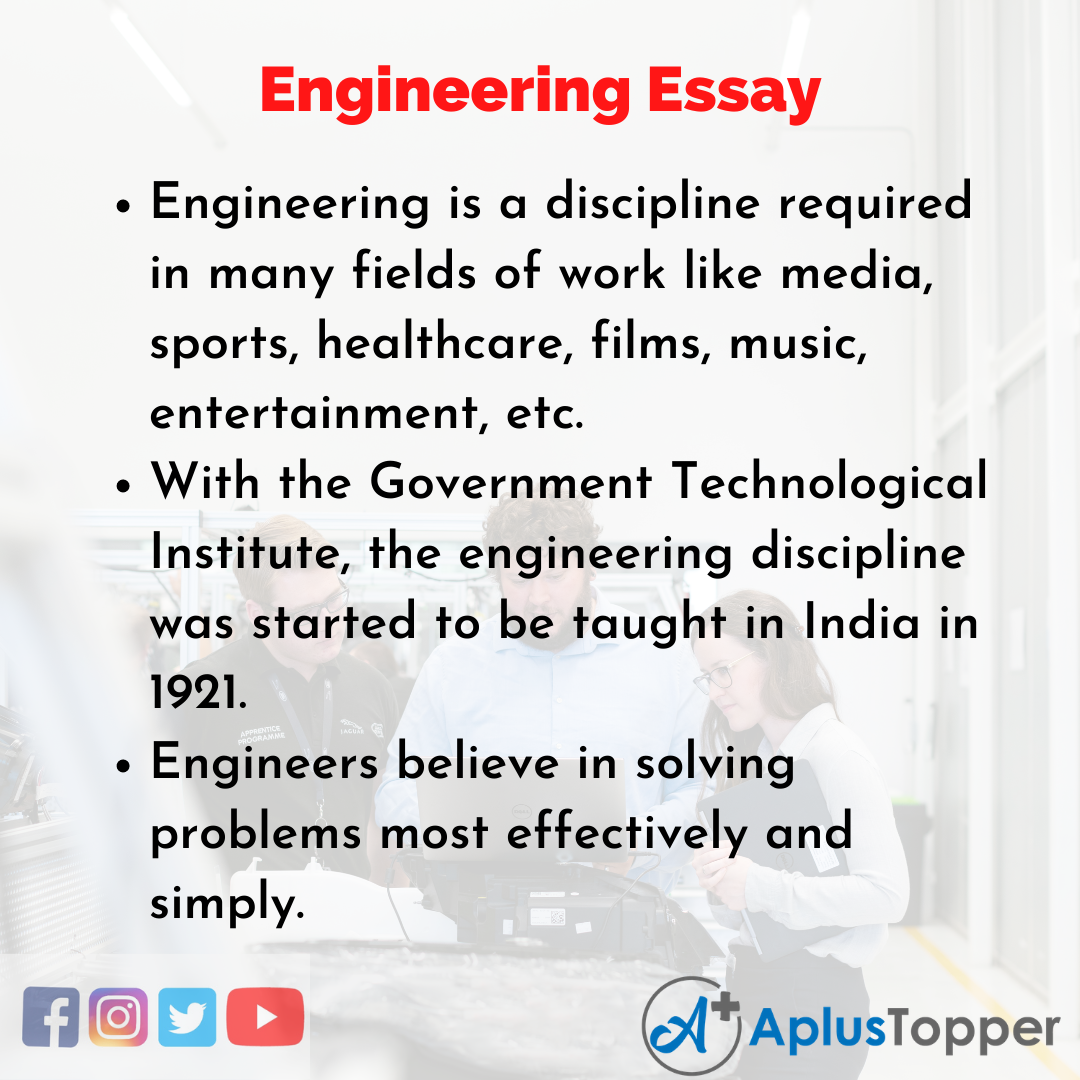 Question 1.
Name the person called the father of computer science.

Question 3.
Which city In India is given the name ‘Silicon city’?

Answer:
Bengaluru is the center of India’s high-tech industry and is also known as silicon city.