Edgar Allan Poe Essay: The central figure of romanticism, Edgar Allan Poe was an American writer, poet, literary critic, and editor. Short stories and poetry formed his best works. He was one of the early practitioners of short story writing in America.

He used to earn a living through his writing career. He faced difficulties in his career. He was very well known for his detective genre in writing.

Edgar Alan Poe was born in Boston and one of the most influential American writers of the 19th century. He was the first author in the world who tried to make a living by his writing skills. He lived a life filled with tragedy. He was considered as part of the Romantic Movement, mainly in the sub-genre of Dark-Romanticism.

He was a very well-known writer but struggled financially and struggled with depression and madness. He was one of the early writers to focus on short stories in America. He was the inventor of the detective fiction genre. A few of his great works on short stories included The Pit and the Pendulum, The Cask of Amontillado, and The Purloined Letter. Poe’s first work, an anonymous collection of poems known as “Tamerlane and Other Poems,” was published in 1827.

He changed his writing focus to prose, and after writing years of periodicals and journals, he became famous for his style of literary criticism. He was considered an American gothic writer for his epic story “The Fall of the House of Usher.” This story reveals the ultimate tragedy of Roderick Usher, who suffered from a variety of mental health problems.

He was born in Boston in the year 1809 on January 19th. When he was three years old, both his birth parents died. He was then taken by a wealthy tobacco merchant John Allan, and his wife, Francis Allan. They were his foster parents. Poe was sent to one of the best boarding schools and later to the University of Virginia. He excelled in his studies academically.

Edgar Allan Poe was into gambling; thus, he had to leave his university when John Allan refused to pay his gambling debts. He moved to Boston and started writing poems. Not receiving any attention for his first collection of poems, he wrote his second collection of poems, Al Aaraaf, Tamerlane, and Minor Poems. He took admission to the United States Military Academy but had to leave the university midway for lack of financial support.

He finally moved home to his aunt and her daughter Virginia, in Baltimore, Maryland. After selling short stories to magazines, in 1835, he became the Southern Literary Messenger editor. In the year 1836, he married Virginia, who was thirteen years old. He spent a large portion of his life editing several literary journals like Gentleman’s Magazine, Graham’s Magazine, and the Broadway Journal in different places.

During his days as editors, he established himself as a poet and a short story writer. Another set of his best works include The Murders in the Rue Morgue, The Raven, and The Tell-Tale Heart. His wife, Virginia, died in the year 1847 due to tuberculosis. As a result of which Edgar Allan Poe’s depression worsened. His work had an immense impact on American and international literature. He was one of the originators of horror as well as detective fiction. Many call him the “architect” of the modern version of short stories. Edgar Allan Poe took birth in Boston, but within three years, his parents died, and he was looked after by his foster family John Allan and his wife. He had a unique and dark way of writing. His mysterious styles appeal to drama and deeply knit emotions. His themes of short stories are mostly based on love, lost love, death, or both.

He struggled in his career. The lack of international copyright law hampered him. He has been a conspicuous contributor in the world of literature as he was well versed both as a creative author and a critic in the world of contemporary writers.

He is mostly remembered for his short fiction. His early works reflect the influence of English romantics like Lord Byron, John Keats, and P.B Shelly. His life ended when he was 40 years old. He took his last breath on October 7th, in the year 1849. He is still remembered for being a pioneer in writing short stories. 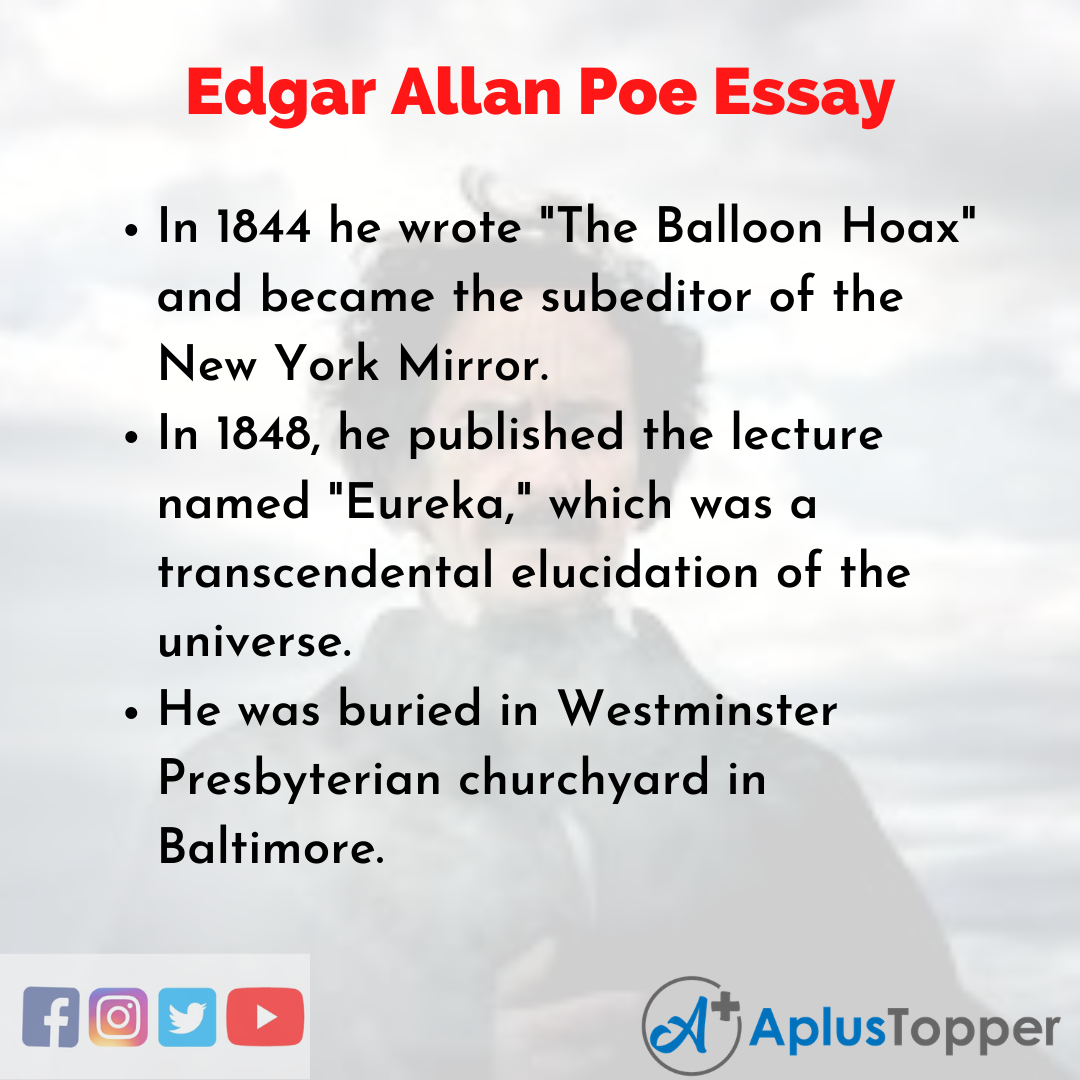 Answer:
Real-life murder incidents were his inspirations to write.

Question 2.
Why did Edgar Allan Poe marry his cousin?

Answer:
The Maryland Medical Centre believed that he died of rabies and not due to complications of being an alcoholic or heart-related issue.