Durga Puja Essay Writing: Durga Puja also known as Durgoutsav, is the biggest festival of Hindus celebrated for worshipping Goddess Durga. It is a festival of good wins over evil. This festival celebrates the victory of Goddess Durga over the buffalo evil Mahishasura. This festival also represents “Shakti” – the power of women in the Universe. This is a festival of Hindu religion and culture which takes place in Ashwin month. The states such as West Bengal, Assam, Odisha, Tripura, Manipur, Jharkhand i.e Hindi, and other East India states are famous for celebrating Durga Puja. My Favourite Festival Durga Puja Essay in English.

Long And Short Essay On Durga Puja In English

The celebration takes place for ten days by tradition. The last four days of the festival that is Saptami, Ashtami, Navami, and Vijayadashami are celebrated with great enthusiasm and belief. The celebration of Durga Puja depicts the cultural values and customs and reunites family and friends. This year, Durga Puja will be celebrated from 4th October to 8th October, till the immersion of the idol. Essay on Durga Puja in 1000 words.

As depicted in mythology, Himalaya is the father and Menka is the mother of Goddess Durga. Later for getting married to Lord Shiva the Goddess became “Sati”. It is also depicted that Lord Rama was worshipping Goddess Durga to become powerful and destroy the powerful Ravana.

Durga Puja (दुर्गा पूजा) celebrations vary depending on the place, customs, and beliefs. This festival is celebrated in many ways in different places in India. Some places it is celebrated for 5 days, some places for 7 days and some places for the full 10 days. Durga puja begins from the sixth day which is “Shashti” and ends on the tenth day which is “Vijayadashami”. It teaches people to fight with evil and come forward with the real victory in life.

People begin this festival by installing many handiwork goddess Durga idols in various pandals. Goddess Durga idols hold various weapons in ten hands and sit over the Lion. She got victory over Mahishasura for weakening the evilness. In Durga puja, people visit the decorated pandals and pray to the goddess. At this festival, people enjoy decorated stages, dance programs, a variety of foods and games.

Performance of Rituals in Durga Puja

Durga puja celebrated for six days. The festival begins after Mahalaya. After this, people invite the goddess Durga to earth and draw her eyes in the idols. The sixth day is known as Sashthi which is the beginning of the goddess Durga’s journey to earth. The decorated idols of the goddess are unveiled and worshipped on this day. The Saptami, Ashtami, and Navami are the main celebration of the goddess as well as the worship of Lakshmi, Saraswati, Ganesha, and Kartikeya.

The idols of goddess Durga are invoked with life by performing the Pran Pratisthan ritual on Saptami. People perform the “Kola Bou” ritual by wrapping a banana tree in a sari and bathed like a newly wedded bride in a river. This process is performed to transport the goddess Durga’s energy.

Why Goddess Durga is Worshipped?

On Ashtami, some people celebrate Kumari Puja by worshipping unmarried young girls in different places of India. In this puja, the young girl’s feet are washed and applied Alata, a red-colored liquid to them before starting puja. After this, food and sweets are given to them for eating. The Chamunda form of Durga who got victory over Mahisasur is worshipped in the evening is known as Sandhi Puja.

Navami is the last day of the rituals of the festival. People perform a grand Aarati to complete the festival celebrated on this day. Some people also perform Ayodhya puja on a ninth day in different places in India. On this day, people worship instruments and other items to bring happiness and accomplish goals in life.

The tenth day is known as Vijaya Dashami, people believe that the goddess returns to her husband’s home. People arrange the immersion procession of Goddess Durga idols into the river with devotion. Vijayadashami is also known as Dussehra. People celebrate Lord Rama’s victory over Ravana by burning the big statues of Ravana and performing fireworks at night.

Why do we celebrate Durga Puja? People believe that celebrating Durga puja brings mental peace and happiness in life. Durga puja also encourages people to become the success over the complications which they face in their life. In this puja, people worship goddess Durga to destroy the negative energy and thoughts around them. It also helps people to get knowledge and prosperity and get off from sin. This celebration not only has a religious impact but also forms a stage for traditional and communal conversation. In this puja, some people perform fast and chant mantras of the goddess Durga in various ways. 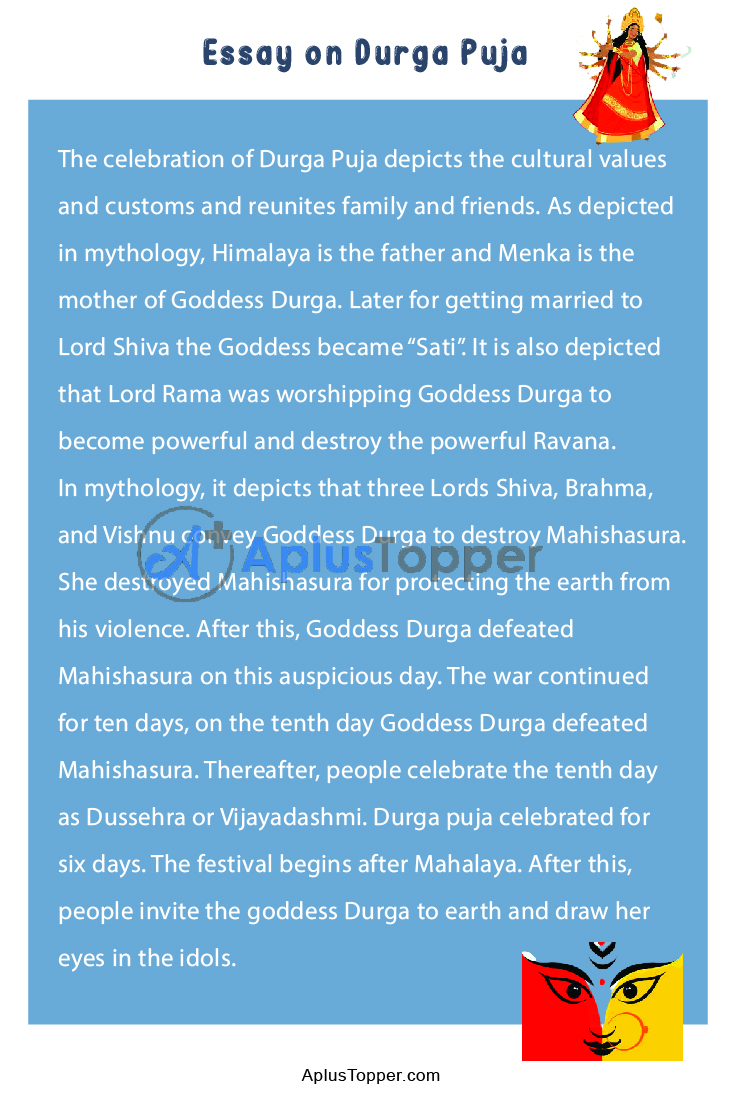 Durga puja is the big festival in West Bengal. West Bengal people usually perform full of pandal decorations and lightings in the cities. They celebrate this puja with great joy and devotion. Also, tourists visit this place to become part of this celebration. Durga puja is a grand celebration for West Bengal people. They perform this puja with all the rituals for ten days. Schools and offices also declare holidays to enjoy and celebrate Durga puja. People share gifts with their family and friends. The celebration involves the Hindu faith as well as other religions present at Bengal. People over there wear traditional outfits to enjoy the celebration.

People in India celebrate and enjoy this important festival regardless of their religion, background, and status. This festival is especially popular among the people of West Bengal and Odisha. The most essential part of this festival is dance and cultural programs. People also enjoy a variety of delicious traditional foods at this festival. The Kolkata city embellishments with shops and food stalls. That is why many Bengalis and foreigners enjoy delicious foods and sweets. All offices, schools, and institutes remain closed in West Bengal. Durga puja depicts that good wins over the bad.