Drug Abuse Essay: Drugs are the new emerging trends in the world. Where knowledge and life values should be something that is inculcated in every mind, the drugs are taking their place and making life itself void. Drugs have positive uses too, but as it is human nature, we tend to bend towards the negative side of the use of drugs. We provide samples of Long and short essays with guiding pointers on this topic.

Drug Abuse essay will be helpful for students in classes 7, 8, 9, and 10 for their assignments or as an examination essay reference.

‘Drugs take you to hell, disguised as heaven’. This statement defines the meaning of drugs accurately in one single line. You might think that not everyone takes drugs, but surprisingly this has become a lifestyle of some people. You might believe that this happens only in movies or with movie stars, but that is just a far-fetched reality. Drugs are very much a part of people who were normal once upon a time, due to many different reasons.

What exactly are drugs? Drugs are substances or a combination of substances that can alter the state of your mind in a way that you cease to see the reality about what is happening with your life. This is the most common reason for taking drugs most of the youngsters today.

What drugs do is change the basic way of your body or mind. As mentioned above, there are many different reasons why a person could want to take drugs. One of the frequent reasons is the curiosity to see what happens. The peer pressure makes you do things just to see how they work, and before you know you are hooked up.

The effects of drugs on the body and mind like the sudden boost of energy or the relaxed calmness is also why drugs are popular. Drugs are known to disguise realities and this helps them cope up with certain situations. Of course, this is just a way of running away from one’s self but people who are prone to drugs would never understand that. At last, there comes a stage when a person who takes drugs becomes dependent on them and has to keep on taking them due to avoid the pain of withdrawal symptoms.

The effects of drugs can vary in numerous situations as well. First and foremost being the mental wellbeing. A person, to cope up with situations tries drugs and due to the addicting effects doesn’t recognize reality. Drugs completely change the way they think and behave. This, in turn, affects whatever relationships they have in their life and the impact is mostly always negative.

Financial situations take a rough blow under the influence of drugs as they are not found easily and are expensive. If you had no criminal record, you surely will after taking drugs. Most of the addictive drugs are not found legally, and under a drug offense, it becomes hard to gain a job or even a minor loan.

Thus, Drug Abuse is a very well recognized problem for the new generation but still, it would take a lot of knowledge to steer clear of it. Taking Drugs can be overwhelming and indecisive, but it is a work of sheer will to overcome that disastrous addiction. 11.8 million deaths are the result of drug abuse each year. The will to not fall prey to such addictions in life is the only way to save ourselves from being prematurely dead. 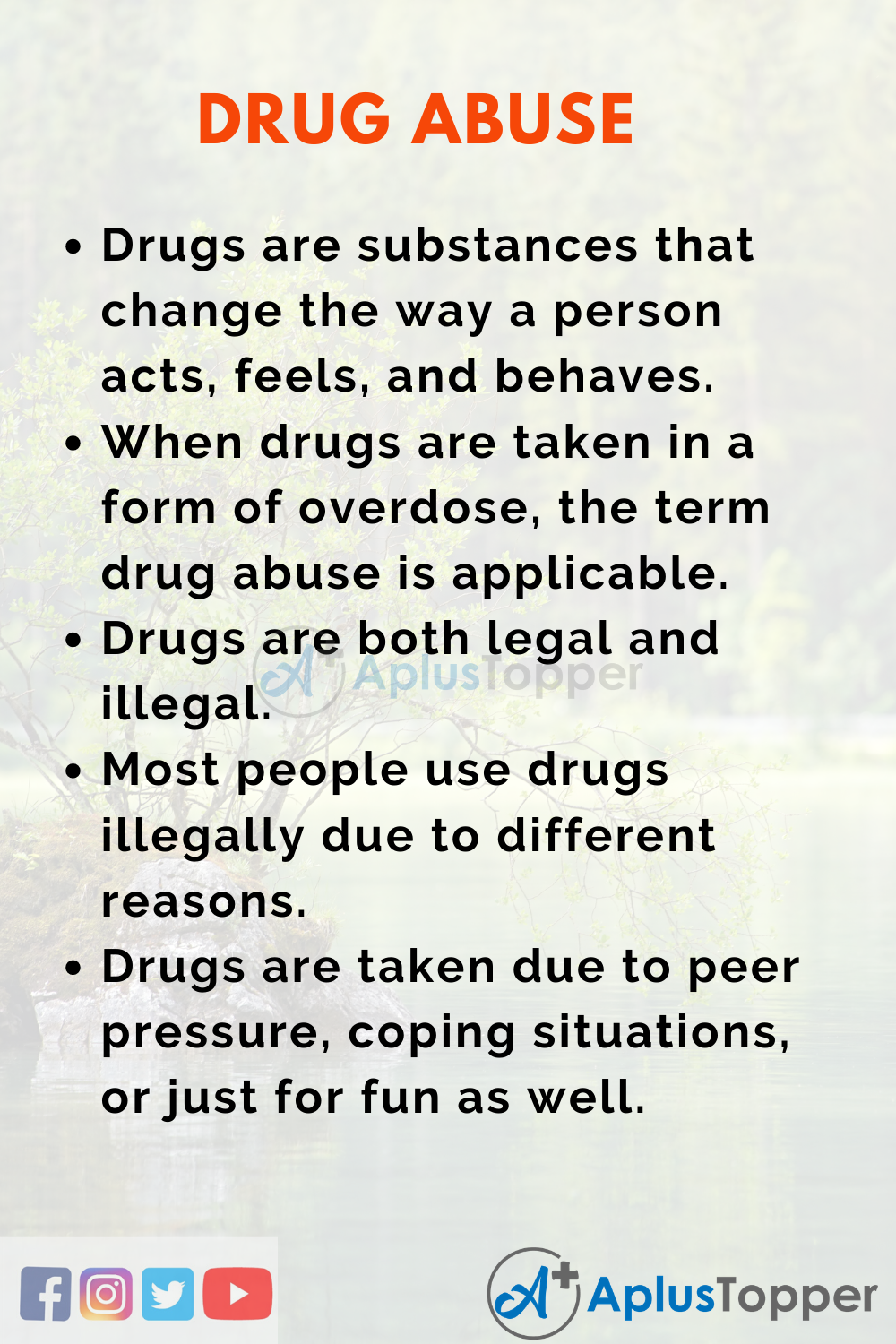 Drugs are nothing but certain substances that make you addicted to them and change your lifestyle. The change that comes within your lifestyle is mostly negative. It is known to alter reality in such a way that you forget your roots and become prone to succumbing to your bad habits. The main change comes into your mental and physical wellbeing. This gives way to financial problems and negative effects on family and even professional relationships.

Drugs are not to be taken lightly as a problem. They are something that is often taken lightly and are taken within but is soon found to be irreparable mistakes. Drug use is mostly opted for when you are trying to cope up in a situation where you are emotionally tired and you feel that taking drugs would free you of the pain. This is the reason why most of the young generation falls prey to this demon.

Drug abuse is the most problematic cause of death in the world. Around 350,000 die from overdoses of smoking, drugs, and drinking as well. It is high time that we understand the seriousness of drug abuse and stay as far as possible from it. 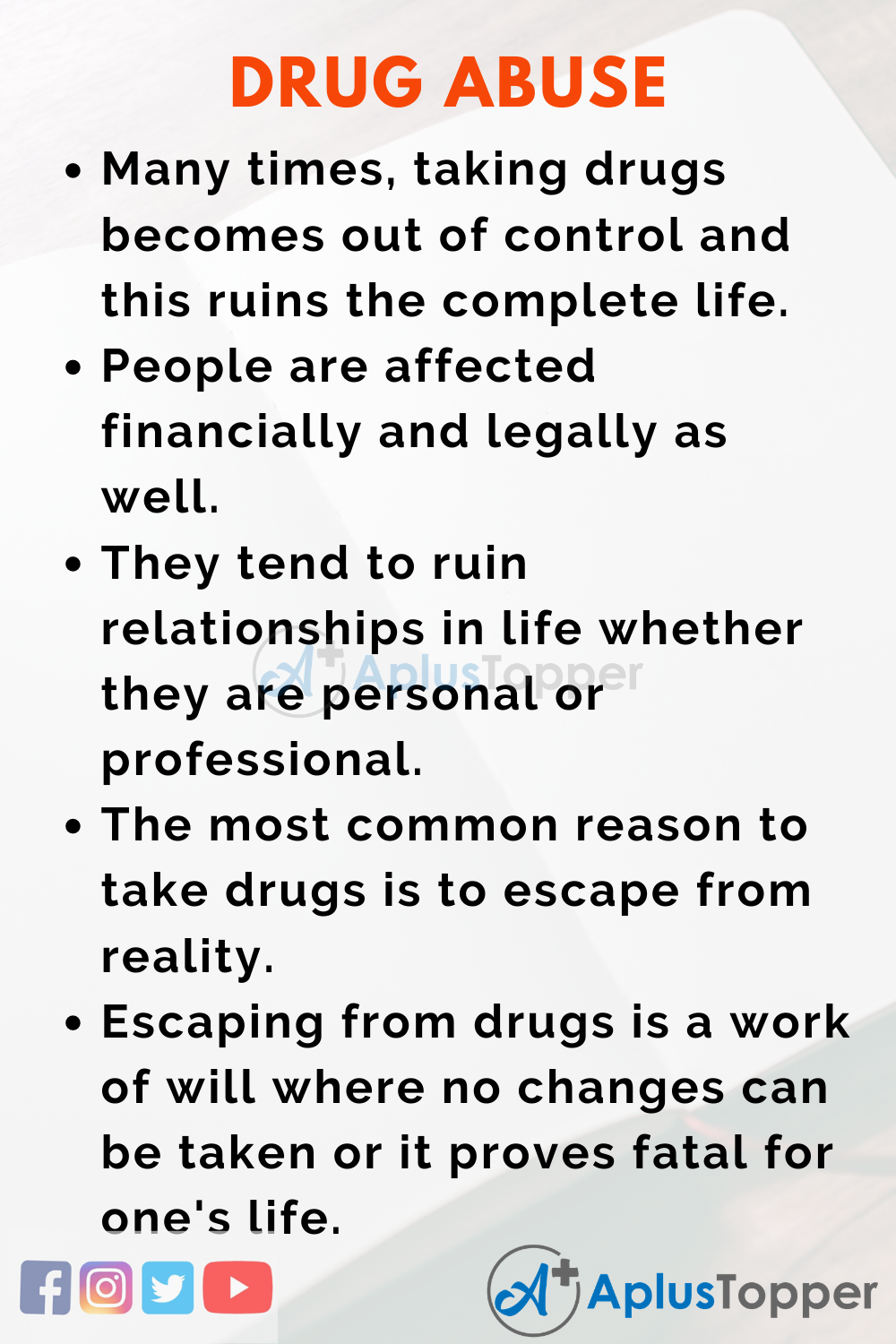 Question 1.
What are the short-term effects of Drugs?

Answer:
The effects of drugs vary on the person’s size, gender, mood, fitness, diet, and age. The environment in which it is taken makes a difference. Some people become angry, depressed, or overly talkative.

Question 2.
What are the symptoms of drug use?

Answer:
Drug use includes a change in behavior, unnecessary anger, withdrawal from family and friends, suspicious activities, and deterioration in health.

Question 3.
How can Drugs be avoided?

Answer:
The safest option is not to accept the intake of drugs. If you are pressured to do so, you can remove yourself from the situation entirely.

Question 4.
Who are easily prone to drugs?

Answer:
Anyone can be prone to drugs, but mostly the cases found and proved are teenagers and adults ranging from 11-29 years of age.