Domestic violence can be affecting people from all walks of life. It can be subjected towards a partner, spouse or intimate family member. Domestic violence is a learned behaviour and is not practised due to any common excuses such as drugs or alcohol, anger or mental problem.

We are providing students with essay samples on a long essay of 500 words and a short essay of 150 words on the topic Domestic Violence for reference.

Acts of domestic violence may include persistent forms of marital rape. Also, violent physical abuse such as beating, choking, female genital mutilation and acid throwing that can lead to disfigurement and in extreme cases, death. Apart from these, calling the victim names to insult or put them down and preventing or discouraging the victim from going to work or school or even stopping them from seeing family members or friends.

They are trying to control how one should spend their money or controlling what one wears. Acting jealous or possessive or even constantly accusing the victim of being unfaithful. These are also a few ways in which domestic violence is practised. On a worldwide basis, women are overwhelmingly the victims of domestic violence. Also, women tend to be experiencing severe forms of violence. In some countries, cases of domestic violence are often seen as justified – especially in cases of suspected or actual disloyalty on the women’s part and are also legally permitted.

Research has shown that there exists a significant and direct correlation between a country’s level of gender equality and domestic violence rates. Countries that experience higher rates of domestic violence have less gender equality. Domestic violence on a worldwide basis is among the most underreported crimes globally for both women and men. Due to the presence of the social stigmas regarding victimization of male, men who are domestic violence victims face an increased likelihood of being overlooked by healthcare providers.

In an abusive relationship, there is a cycle of violence and abuse, which is committed by the abuser when there is a rise in tension or an act of violence is committed. It is then followed by a period of calm and reconciliation. Victims of domestic violence are stuck in domestic relationships or situations through the lack of financial resources, power and control, isolation, to protect a child, fear of cultural acceptance, traumatic bonding with the abuser or fear of shame. 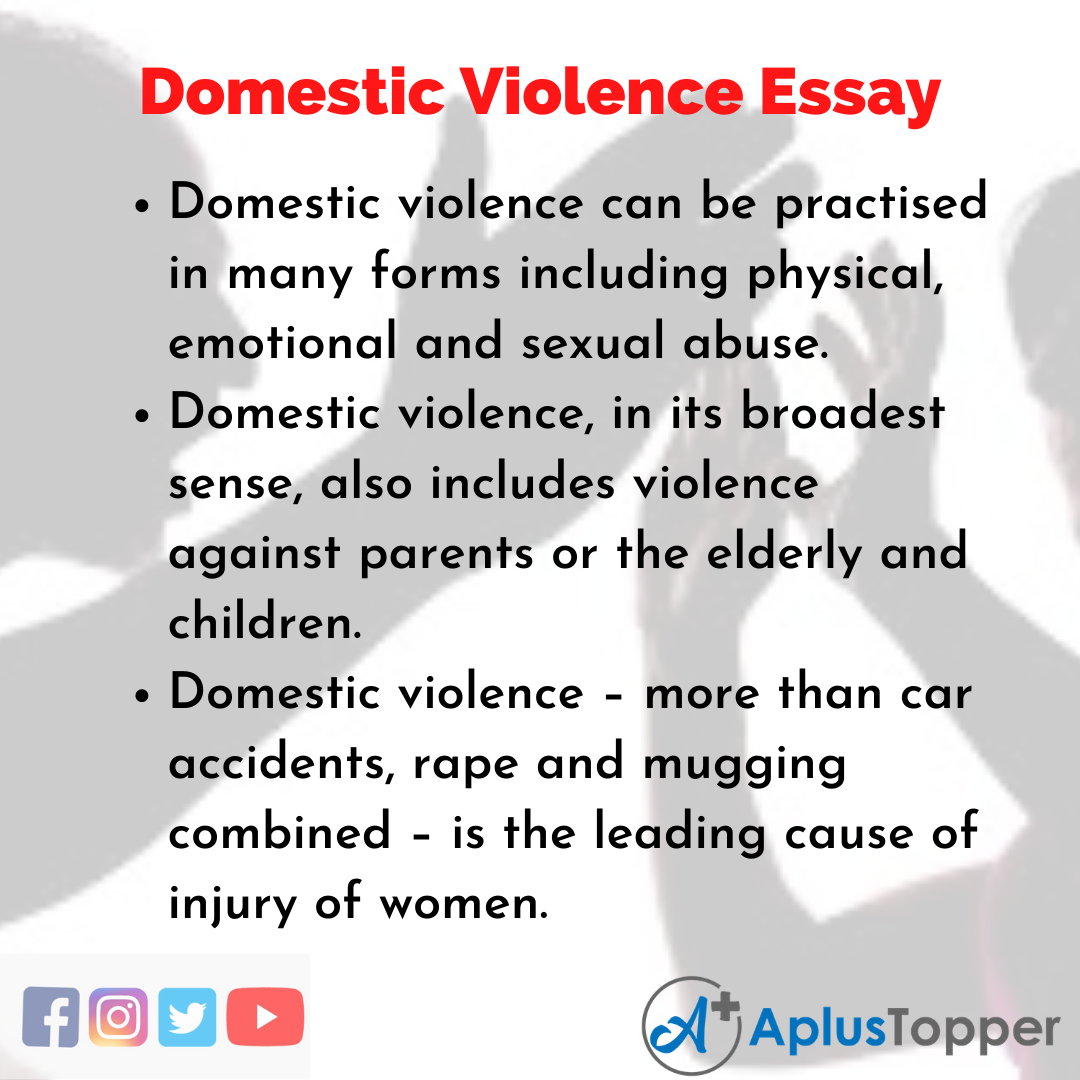 Domestic violence is a part of a relationship between two partners in which the abuser seeks to assert control and power over the victim. The abuser may use different forms of abuse to assert their power. Many individuals fail to identify themselves as abusers or victims as they may consider their abusive and traumatic experiences as a part of family conflicts that got out of control. Definition, perception, awareness and documentation of domestic violence widely differ from country to country.

Traditionally domestic violence was only associated with physical violence. Domestic violence involves not only physical but also emotional, psychological and sexual abuse. Manipulating the victim with the help of his or her children is also a type of domestic violence. The abuser may be isolating the victim from other people who may be assisting. Victims of abuse may experience mental illness, physical disabilities, dysregulated aggression, psychological disorders such as Post Traumatic Stress Disorder, chronic health issues and poor ability at creating healthy relationships.

10 Lines on Domestic Violence in English 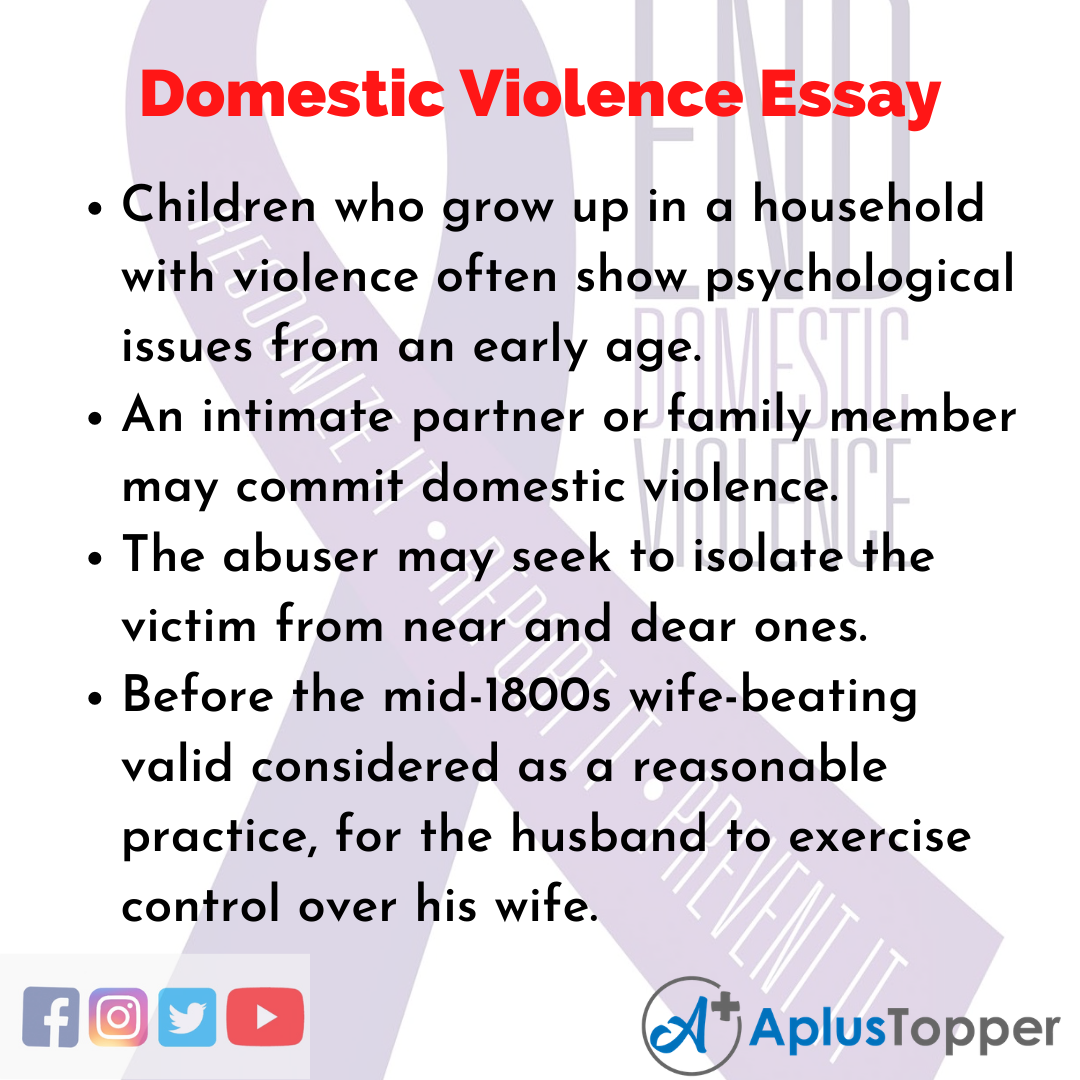 Question 1.
What are the different forms of domestic violence?

Question 2.
How to come out of an abusive relationship?

Question 3.
Which country has the highest rate of domestic violence?