Discrimination Essay: According to the Oxford dictionary, discrimination is the practice of treating an individual or a particular group in society unfairly than others based on age, race, sex, religion, finance, etc.

Throughout history, we have seen discrimination tainting every society and nation. This essay examines and analyses the causes and effects of discrimination in various forms on an individual, society, or nation.

We provide children and students with essay samples on a long essay of 500 words and a short essay of 150 words on the topic “Discrimination” for reference.

Our world has always been parted into two groups: victims of discrimination and those who discriminate against the former. The definition of discrimination denies opportunity or equal rights to a specific group of people that may be differentiated based on their religion, skin colour, or gender.

However, discrimination could be confused with prejudice and stereotype. Stereotypes are mental images we have on a particular group of people because of their religion, culture, or gender. Prejudice stems from stereotypes. It’s the act of judging by popular stereotypes.

Discrimination Is a mix of both with the addition of oppression and unfair treatment towards the deemed ‘inferior’ group or individual. Keep in mind that prejudice is a result of attitude, and discrimination results from an action.

Human history is saturated with acts of discrimination. It takes different forms, and modern society is not an exception. It is at the stake of cultural history and has influenced many social, cultural, and economic occurrences that we see today.

One of the most common forms being discrimination based on the financial background of an individual. The world is divided. The oppressive rich and powerful one’s greed to earn more and frowns upon the one who doesn’t have it all while the poor struggles to survive.

When we come across racial discrimination or racism, globally, we see acts of violence and unfair treatment done against people of colour, usually against people who aren’t Caucasian or commonly termed ‘white’ in appearance.

This form of oppression started when European countries started colonizing lands outside Europe in the 1600s and claiming them to be superior. Sadly, racism is still prevalent in the modern world, where a person’s ethnicity derives them from equal rights and opportunities.

In the history of humanity, we have come across several gruesome acts of discrimination. One of them being the mass genocide of Jews living in Europe, led by the Nazis and their leader Hitler, during the 2nd world war. We still see acts of systemic racism in countries all across the group.

Sexism has also been a significant issue over the centuries. Women face discrimination and double standards in their homes and their workplaces. Here we see women being oppressed, abused, and mistreated by men. Sexism resides in every society worldwide, blocking women from attaining every other right that a man gets to enjoy.

We also see people getting discriminated against for their sexual orientation. Homophobia and transphobia are what every queer has to go through living in today’s society. They get judged, oppressed, threatened, and even illegalized just for being who they are.

Another form of discrimination that’s primarily affecting the world today is discrimination based on religion. Today’s world is so divided that one wrong act from a community will form a lousy rep around the group.

A country like India, which is constitutionally secular, is now fragmented because of fights struck against religious minorities. In America, after the 9/11 massacre struck, people developed this strange stereotype and hatred towards people who follow Islam, also known as Islamophobia.

To sum it up, discrimination forms a menace to society and the person who has to face such an adverse treatment as it is a straight denial of the equal worth of the victim. It is a violation of an individual’s identity. 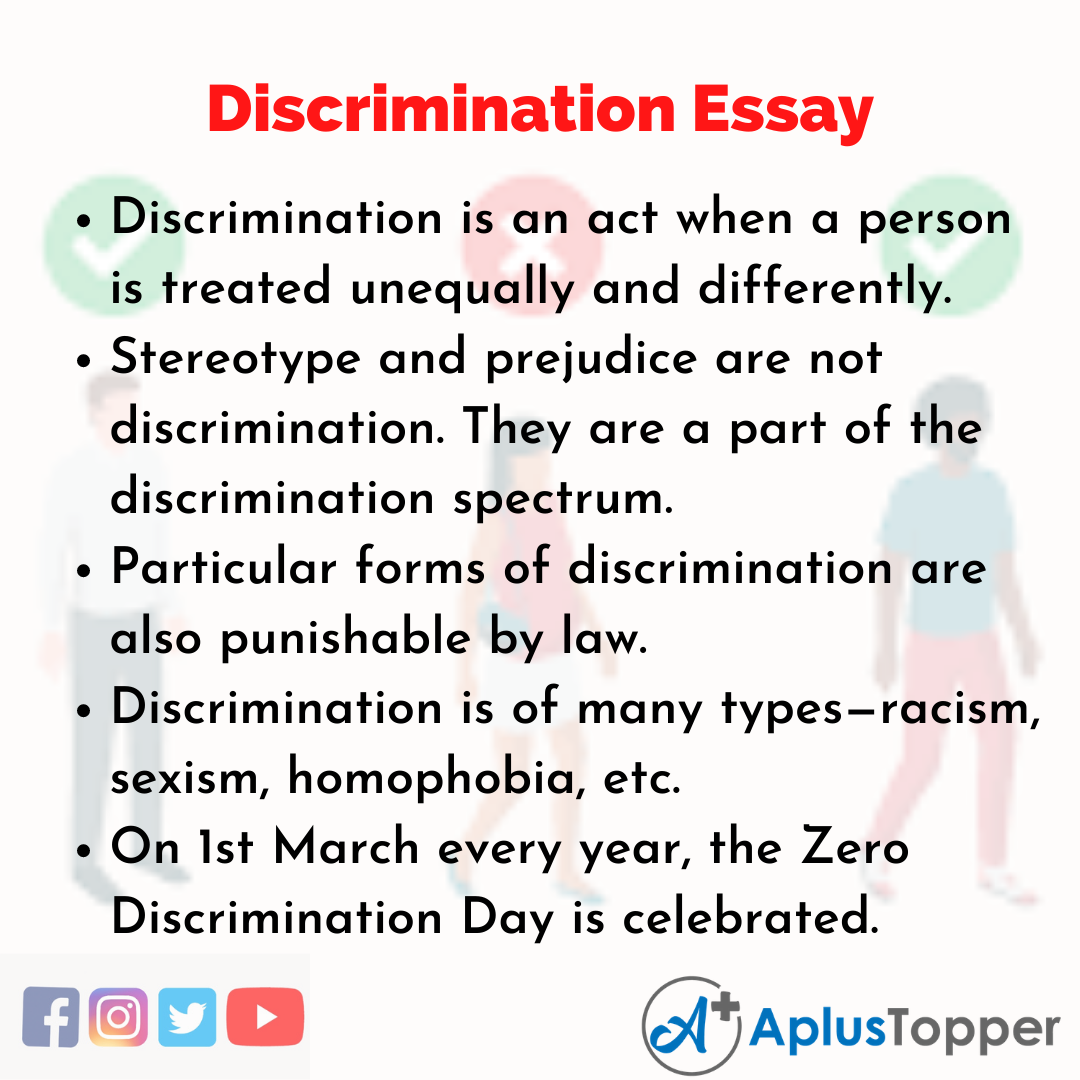 The world we live in now faces significant issues like racism, sexism, homophobia, and Islamophobia. All these issues pile up to build a society filled with injustice, inequality, and in general toxic.

We study all the gruesome and bloody acts and events that have stained humankind all because of discrimination in history. Nowadays, these acts of discrimination are getting recognized and being called out, but it’s far from getting eradicated.

The government should form laws to avoid it; parents and schools should educate children on equality. The fight against discrimination is a long and hard one, but we have to continue fighting this social evil.

10 Lines on Discrimination Essay in English 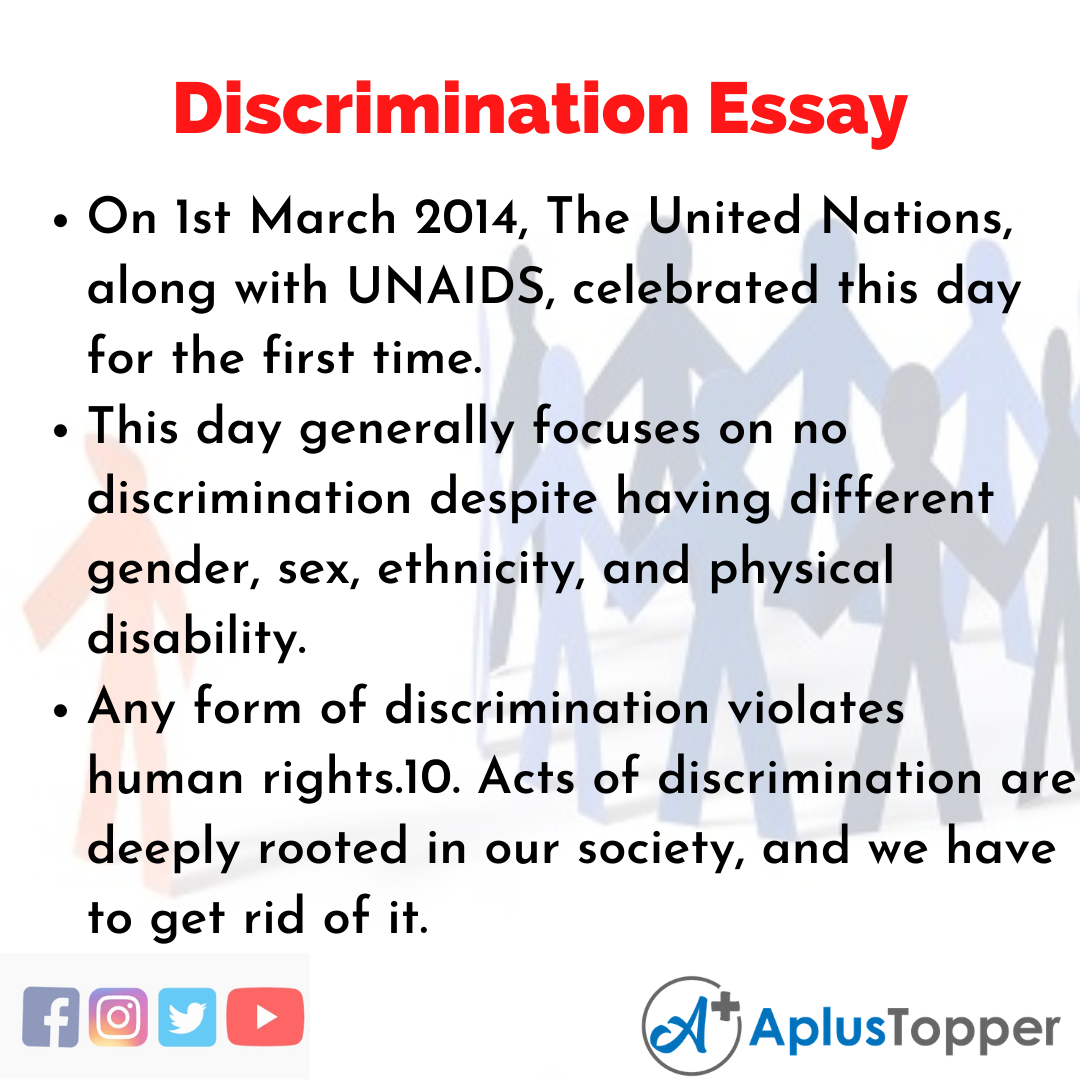 Question 1.
What is Discrimination?

Answer:
Discrimination is an act of making unjustified distinctions between people based on the groups, classes, or other categories to which they belong.

Question 2.
What are the four main types of discrimination?

Question 3.
What is the cause of discrimination?

Answer:
All forms of discrimination are prejudice based on identity concepts and the need to identify with a certain group. This can lead to division, hatred, and even the dehumanization of other people because they have different identities.

Question 4.
What kind of discrimination is illegal?