We are providing students with essay samples on a long essay of 500 words and a short essay of 150 words on the topic of Diabetes for reference.

Diabetes is a severe metabolic disorder that causes high blood glucose. Diabetes can be both reversible as well as chronic. Chronic Diabetes includes Type 1 and Type 2 diabetes, in which Type 1 is caused due to genetic reasons, whereas Type 2 is caused due to an irregular lifestyle. Reversible Diabetes includes prediabetes and gestational diabetes. Prediabetes usually precedes the onset of type 2 diabetes but can be corrected with proper diet and exercise.

Gestational Diabetes occurs only during pregnancy, and once the baby is born, the condition gets better in the mother’s body. However, women with gestational Diabetes stand a risk of suffering from Type 2 diabetes later on in their lives. Chronic Diabetes is caused by a lack of insulin hormone production or the body’s resistance to the insulin produced. Insulin produced by the beta cells of Islets of Langerhans of the pancreas is responsible for regulating glucose levels in the blood.

Usually, when the blood glucose levels increase, it sends a signal to the pancreas to produce insulin, helping the cells absorb the glucose. After that, the level of blood glucose comes down to normal, and insulin secretion drops. In Type 1 diabetes, the body’s immunity system fuelled by a genetic reason leads the immune response to attack the beta cells and destroy them, thereby diminishing or almost inhibiting insulin production. In this condition, the patient needs a steady influx of insulin in regular insulin injections to maintain normal blood glucose levels. Obesity or lifestyle habits barely play any role in this form of Diabetes.

On the other hand, Type 2 diabetes is caused due to unhealthy lifestyle habits such as prolonged lack of proper sleep, excessive alcohol and tobacco consumption, excessive consumption of junk food, and obesity, to name a few. This condition is caused due to the body’s resistance to the insulin present in the bloodstream and the pancreas’ consequent inability to produce enough insulin to overcome this.

As a result, the cells fail to absorb the glucose, and blood glucose levels increase abnormally. Type 2 diabetes is usually kept in check with medications that constitute insulin sensitizers. People with a sedentary lifestyle, lack of physical exercise, polycystic ovarian syndrome, high cholesterol, hypertension, and obesity are at a high risk of developing Type 2 diabetes. The risk of getting affected with diabetes increases with age. Some of the common symptoms of diabetes include frequent urination, increase in thirst, and appetite.

Apart from medications, Diabetes can be kept in check by maintaining a healthy diet, proper exercise, optimum sleep and water consumption, and abstaining from tobacco, alcohol, and junk food consumption. Prolonged chronic Diabetes can trigger a host of other life-threatening diseases. Some of them being chronic kidney failure (nephropathy), neurological damage (neuropathy), coronary artery disease, stroke, atherosclerosis, retina damage (retinopathy), Alzheimer’s disease, microbial skin infections, foot damage, and hearing impairment. In a few cases, it can even cause depression. 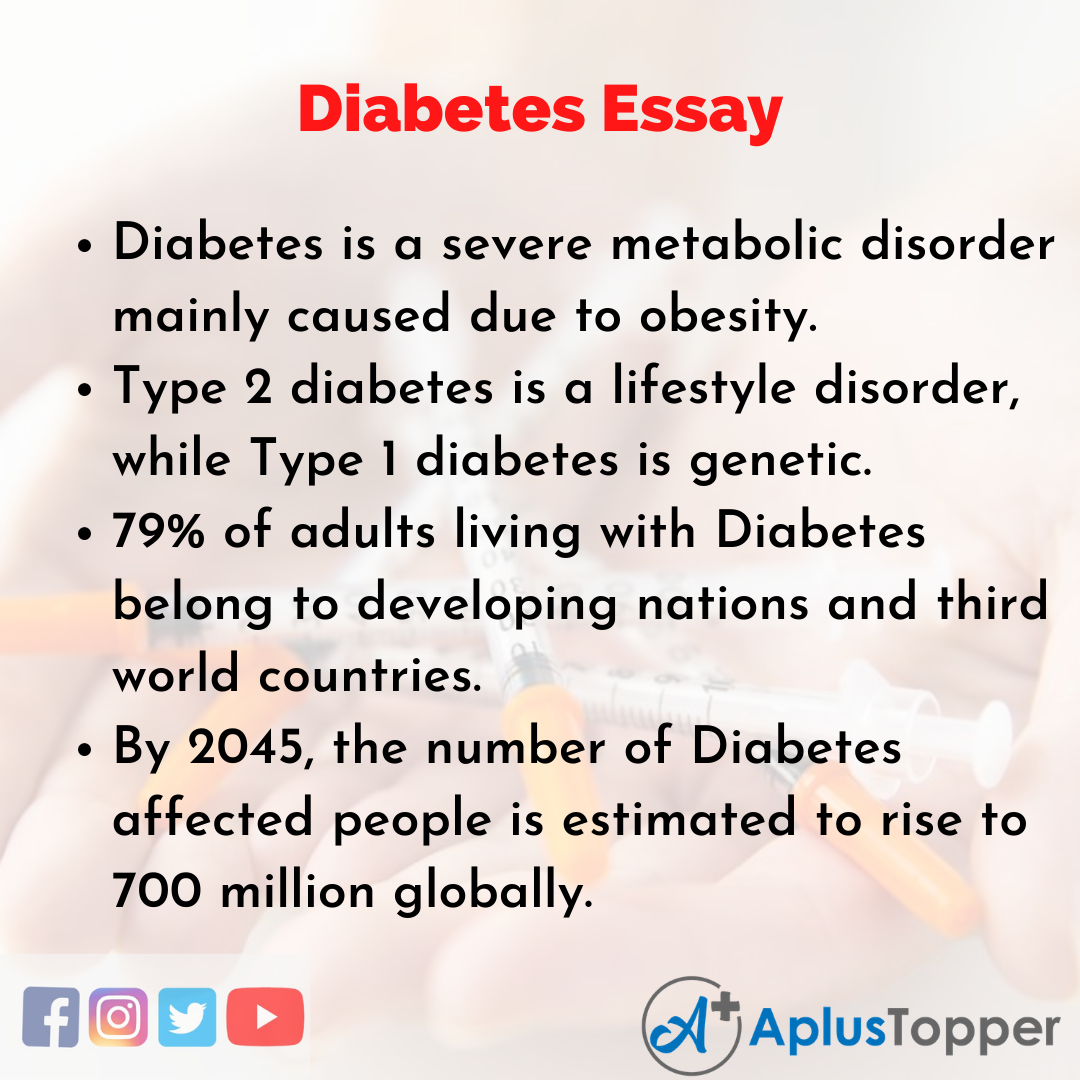 Diabetes is a metabolic disorder that causes an increase in blood glucose levels. It can be both chronic as well as reversible. Chronic diabetes types are more commonly found as compared to reversible ones.

Chronic Diabetes can give rise to other diseases like heart failure, kidney failure, loss of eyesight, nerve damage, and depression. People with high cholesterol, hypertension, obesity, a sedentary lifestyle, and high alcohol consumption are at a high risk of developing diabetes later on.

10 Lines on Diabetes Essay in English

1. Diabetes is a severe metabolic disorder mainly caused due to obesity.
2. Type 2 diabetes is a lifestyle disorder, while Type 1 diabetes is genetic.
3. 1 out of every five people above the age of 65 has Diabetes.
4. 79% of adults living with Diabetes belong to developing nations and third world countries.
5. According to the WHO Global Report, the rate of adults affected by Diabetes has increased four times since 1980.
6. Between 2000 and 2016, there has been a 5% increase in diabetes-related premature mortality.
7. In 2012, globally, 1.5 million deaths were caused by Diabetes alone.
8. The number of people affected globally with Type 2 diabetes is more than that affected by Type 1 diabetes.
9. The number of people affected by Type 2 diabetes is increasing globally.
10. By 2045, the number of Diabetes affected people is estimated to rise to 700 million globally. 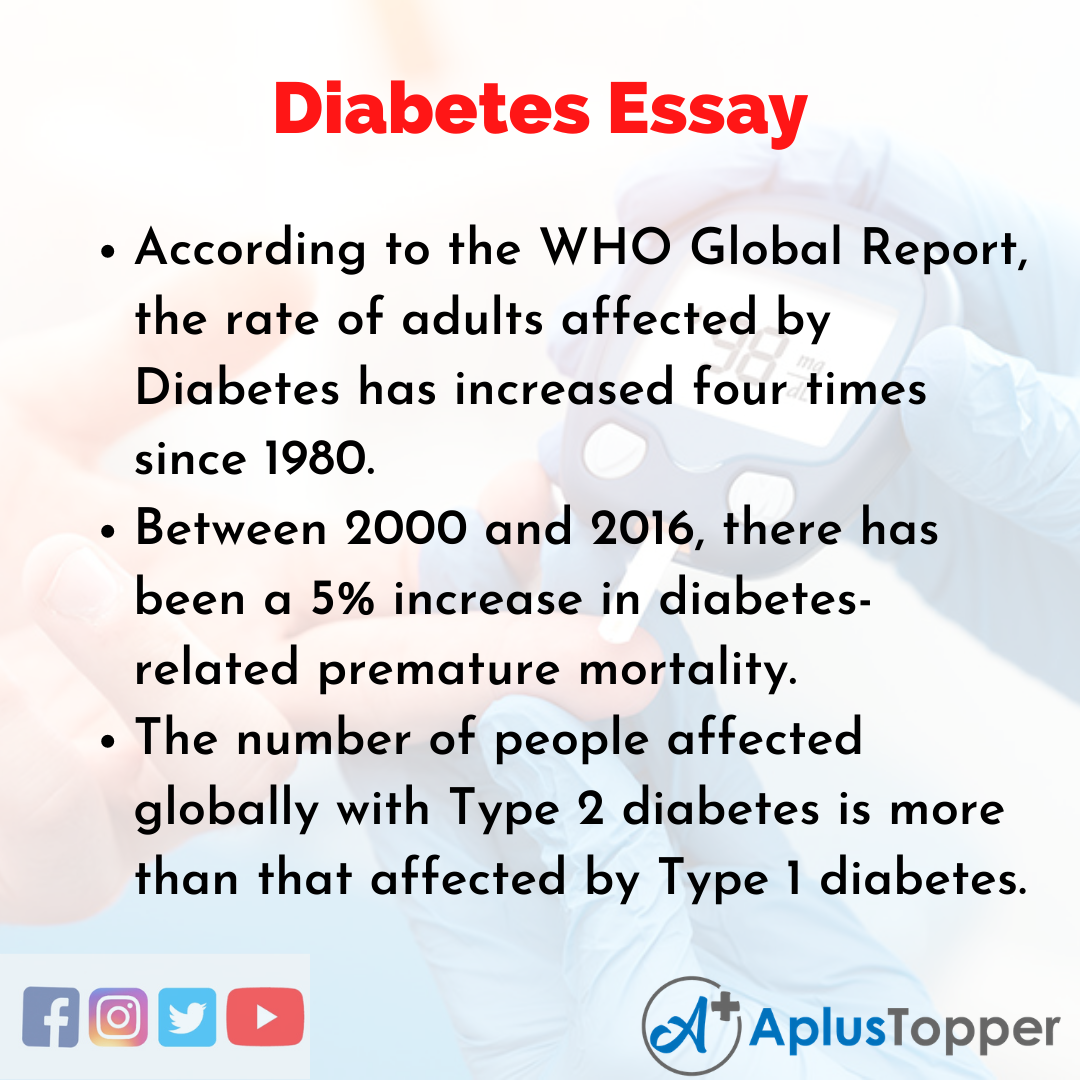 Question 1.
What is Diabetes?

Answer:
Diabetes is a metabolic disorder characterized by high blood glucose and a decrease in insulin levels in the blood.

Question 2.
How is insulin produced?

Answer:
The insulin hormone is produced by beta cells in the Islets of Langerhans in the pancreas.

Question 3.
Can Diabetes cause heart failure?

Question 4.
Can diabetes cause kidney failure?

Answer:
Prolonged Diabetes can cause chronic kidney failure in many patients.