Usually, the perception is that dictatorship is bad and democracy is good. While the history and statistics suggest us that that perception is right to an extent, but it is not always true. In this democracy vs. dictatorship essay, we are going to talk about the pros and cons of both types of governance with real-life examples without any bias. Let us weigh them down in each front and analyse which type of governance is good for the future of our society.

We have provided a comprehensive long 600-word democracy vs. dictatorship essay in this article which is helpful for students of classes 7,8,9 and 10. Also, you can find a short essay on democracy vs. dictatorship with a word limit of 200 is helpful for students of classes 1,2,3,4,5 and 6. These essays can be used by school and college students. This essay can also be used for IAS and other competitive exam preparations.

Long Essay on Democracy Vs Dictatorship 600 Words in English

The rivalry between democracy and dictatorship is not new and has been in existence for thousands of years. World war 2 was fought between a dictatorial regime and a democratic front. While democracy has its own pros and cons, we should not neglect the power of dictatorial regimes to the world’s economy. In this democracy vs. dictatorship essay, we are going to discuss in detail about both the forms of governance.

Democracy is a system of governance in which the general public elect their representative to rule them in the form of a government. This type of rule and regime are strictly followed by the constitution of the country. People choose their representatives by voting in elections. As to say, every citizen of the country is actively involved in running the country, directly or indirectly. Examples of democratic regimes are India, the United States of America, France, the United Kingdon, and Italy.

But dictatorship is a form of governance where the government is run by a single person or a group of people without the active involvement of the common citizen. There are no elections conducted and the ruler, who is referred to as the dictator, is usually succeeded by their own bloodline. Certain dictatorial regimes have a constitution in place, some don’t. Dictatorship is usually seen in the bad limelight, but to be fair, it has its own pros and cons. Some popular dictatorial regimes in history are Libya (ruled by Mohammed Gadaffi), Egypt (ruled by Hosni Mubarak), Germany (ruled by Adolf Hitler) and North Korea (ruled by Kim Jong-un). North Korea, Iraq and Rwanda are few countries that still have dictatorial regimes in the world in 2020.

What are the Pros and Cons of democracy?

Democracy, one of the most popular forms of governance in the world, is seen as the best form of governance as compared to other forms like fascism, authoritarianism or dictatorship. So what are the pros of democracy?

These are the pros of democracy. But most of the time, not all the pros mentioned above are effectively implemented. And hence, there come our cons of democracy.

What are the Pros and Cons of Dictatorship? 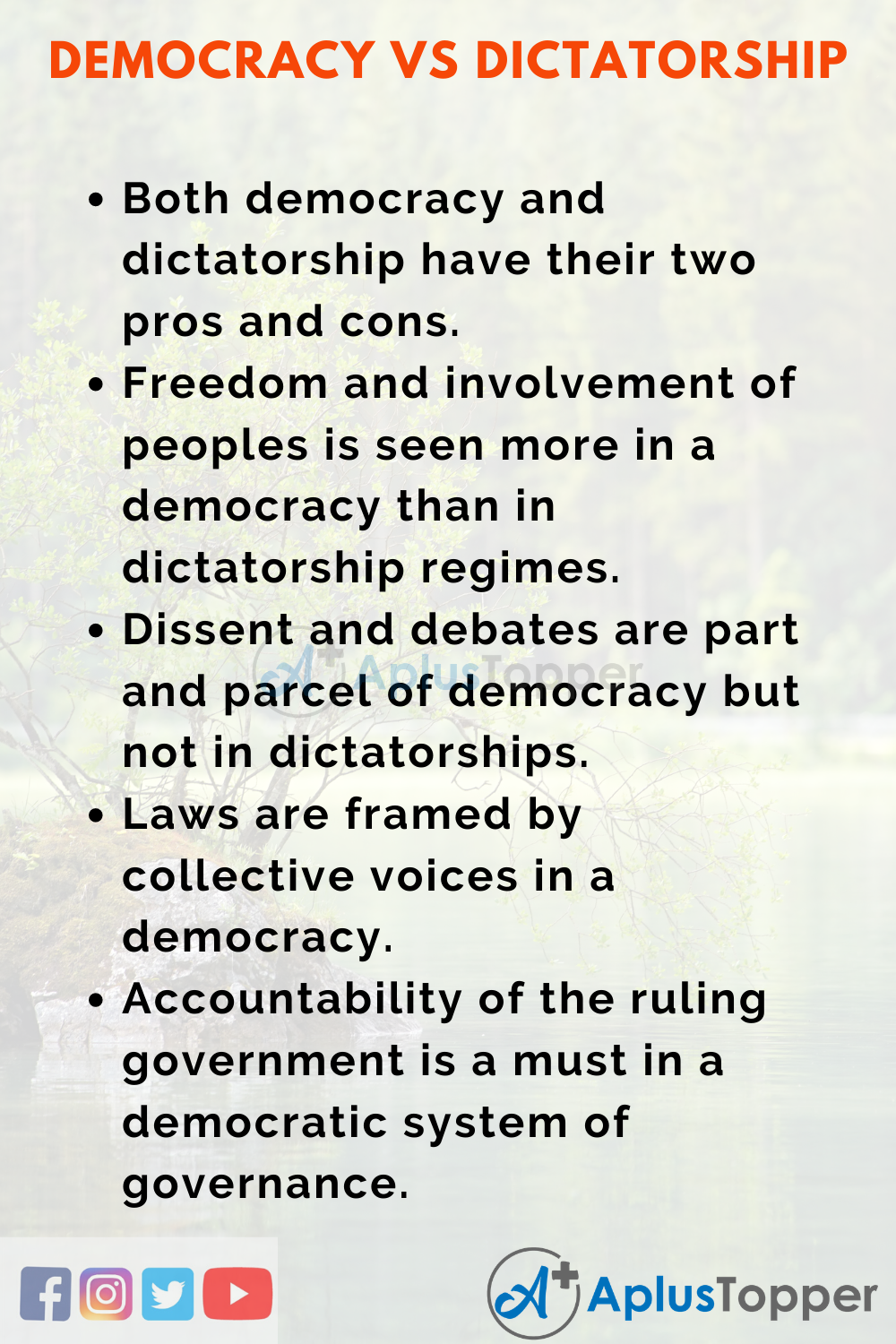 Short Essay on Democracy Vs Dictatorship 200 Words in English

Democracy and dictatorship are two forms of regimes in the world that have seen both good things and bad things. Dictatorial regimes like Germany has seen holocaust on one hand which is the bad part but at the same time, they have seen good economic development and engineering marvels during Hitler’s regime on the other hand. And the same thing holds water for democratic governments. On one hand, the USA is highly developed and Americans have a good standard of living but countries like India, on the other hand, are poor and lack basic facilities, in spite of being the biggest democracy in the world.

So it would be unfair to assume that democracy is good and dictatorship is bad. A good leader or statesmen at the helm of the power, irrespective of whether its democracy or dictatorship, can develop a country and make it a superpower. Each of the systems of governance needs certain changes and calibrations to make it work better.

10 Lines on Democracy Vs Dictatorship Essay 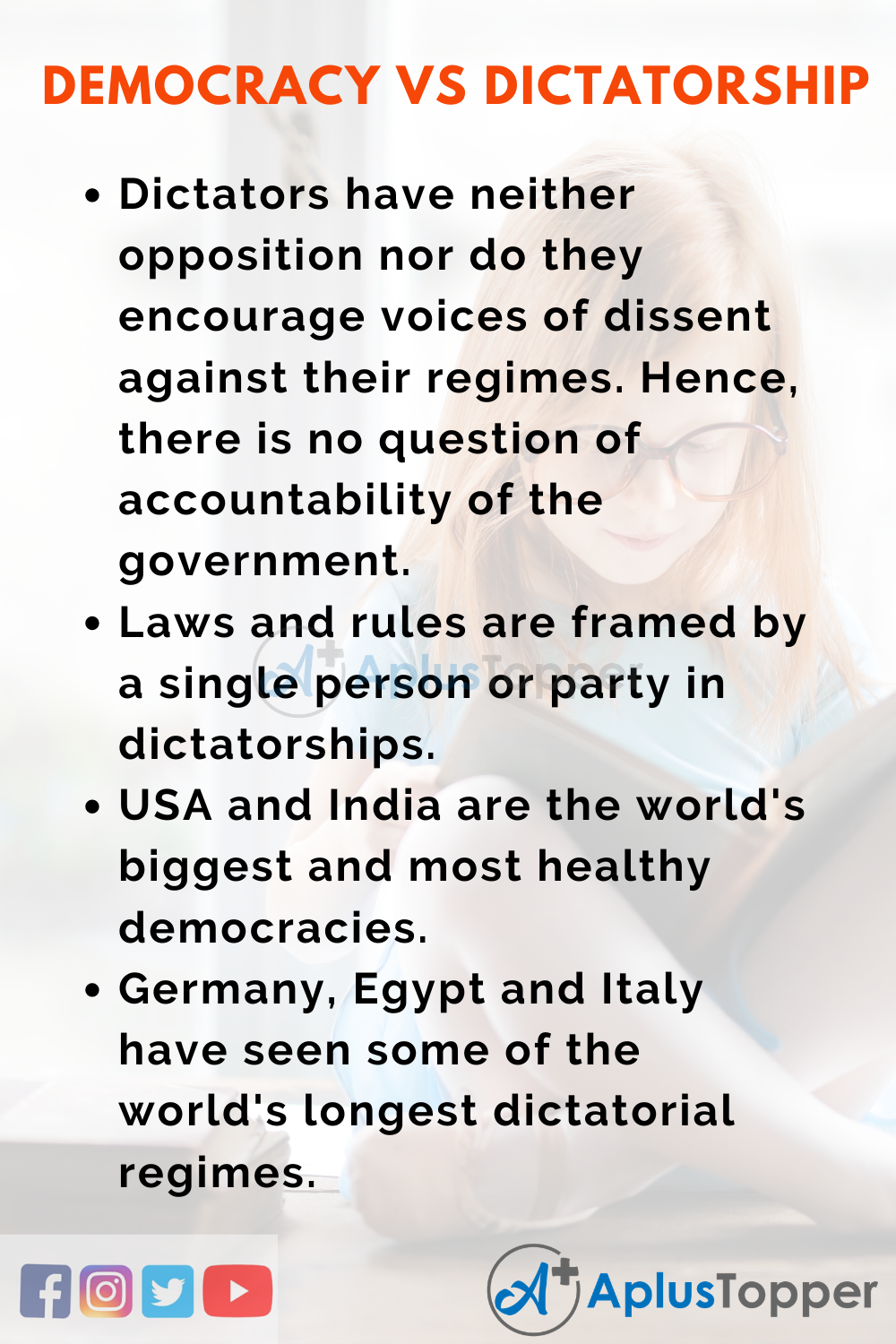 FAQ’s on Democracy Vs Dictatorship Essay

Question 1.
Which is the world’s largest democracy?

Question 2.
Who was the first dictator in the world?

Answer:
Napolean Bonaparte was the first dictator is the world, born out of the French revolution

Question 3.
Who was the most brutal dictator in the world?

Answer:
Joseph Stalin from Russia is considered to be the deadliest dictator in the world

Question 4.
What are the types of dictatorship in the world?

Answer:
Monarchy, autocracy and authoritarianism are the main types of dictatorships in the world