Death Penalty Persuasive Essay: The death penalty is formerly or legally termed as “capital punishment.” This is a government-sanctioned punishment where a person is put to death by the state itself for a heinous crime. There are several arguments regarding capital punishment and its morality.

Mostly capital crimes, capital felonies and capital offences are punishable by the death penalty, but it varies from nation to nation. The sentence that orders someone to be punished is called a ‘death sentence’ while the process of putting the person to death is called ‘execution.’ The one who is supposed to be put to death is often called the condemned or is said to be in the death row.

We are providing students with essay samples on a long essay of 500 words and a short essay of 150 words on the topic Death Penalty.

Long Essay on Death Penalty Persuasive is usually given to classes 7, 8, 9, and 10.

The death penalty, formerly known as Capital Punishment, is a state induced punishment for capital offences and felonies. Here a person is put to death by the state as a punishment to a heinous capital crime. Mostly crimes like murder, mass murder, rape, child abuse, child trafficking or crimes against the government like drug trafficking, plane hijacking, war crimes or genocide have the death penalty as a punishment.

There are several arguments regarding the morality of sentencing, someone, to death. Most nations have abolished capital punishment, yet the major world powers still retain it. A hundred and six countries in total have abolished death penalty while Fifty-six countries yet retain it. The death penalty is still retained in countries like India, China, United States, Japan and many more. Article 2 of the European Union prohibits any form of capital punishment. Hence, all the Fort-seven countries of the EU abide by the code.

History: The practice of capital punishment has been a prevalent one since the beginning of the major civilizations in the world. Earlier due to lack of facilities for constricting criminals in prison or cell, the death penalty was the most viable option. Though the practice of putting someone to death has survived the time now, it is only granted if the crime committed is too serious. Crimes like murder, mass murder, rape, child abuse and trafficking, genocide and other crimes against the government like war crimes lead to the sentencing of death.

Controversy And Debate: Today, most of the countries in the world have abolished the death penalty or capital punishment. Yet the major nations like the USA, India and China still retain the practice. As of a 2004 report of Amnesty International, China has reported the bulk of the capital punishments in the world.

Death Penalty is not a moral or ethical punishment for several reasons:

Violation Of Human Rights: Right to life is one of the most foremost and notable human rights, and the death penalty is a complete violation of this basic right. The death penalty is nothing but the denial of a person’s right to life as a punishment. A lot of people are against this immorality as they feel, the state doesn’t grant human life; hence it has no right to take it away. Others who support capital punishment argue about the victim’s right to life and how no mercy was shown towards him/her.
Psychological Torture: No one knows when they might meet their eventual death. However, it is extremely painful for the condemned to await the day of his death has no control over it. Human Rights Activists oppose the death penalty as it is one of the most degrading forms of punishment. It is psychological torture on the condemned as well as a violation of their birth right.
Wrongful Execution: It has often been discovered that death penalties are given after unfair and unjust trials with little proof to prove someone guilty. In the UK the case of Timothee Evans was that he was wrongfully executed for two murders of which he was innocent.

However, the opposing of the death penalty does not mean that no punishment shall be given. It is argued that punishment should be within the scope of morality and human rights. Otherwise, there is no difference between the state and the guilty. Death Penalty is formally called Capital Punishment. It is the practice where the state puts to death a person who is guilty of a capital offence. Crimes like murder, mass murder and genocide, child trafficking and abuse or rape, often result in capital punishment. However, most countries have abolished capital punishment in the modern-day. Yet, nations like the USA, India, China, Japan and about Fifty other countries.

Capital punishment is a topic of huge debates and controversies among the lawmakers and human rights activists. Human Rights activists feel the death penalty to be a violation of a birth right. Every man has the right to live, but a person sentenced to death loses his human right. The activists argue that life is not given to someone by the state and therefore, it has no right to take it away.

There are often cases of wrongful execution as well. Moreover, the timeless practice of the death penalty doesn’t seem to have affected the crime rate as well. 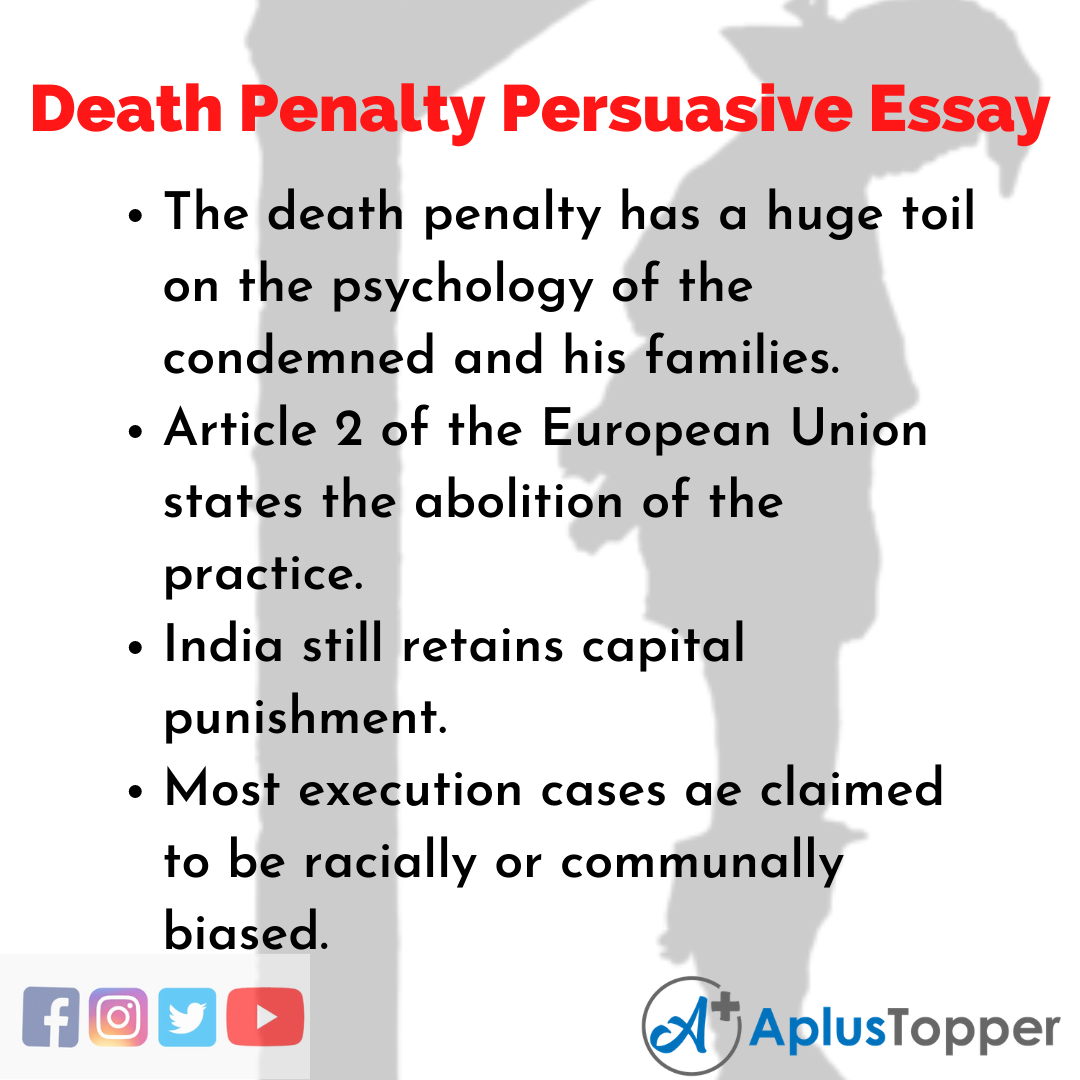 Question 2.
Why are activists against it?

Answer:
Human Rights activists consider it as a violation of the right to live.

Question 3.
Who was Timothee Evans?

Answer:
He was wrongfully executed for two murders.

Question 4.
What is volunteered execution?

Answer:
It is the practice where the condemned doesn’t apply for any appeal of pardon but instead often commit more crimes in prison.