The death of a salesman is a dramatic play revolving around the Loman Family. The protagonist of the play is Willy, who is a salesman and wants to attain the American dream. The other important characters are Biff, Linda and Happy.

We are providing a long essay on Death of A Salesmanof 500 words and a short essay of 150 words on the same topic along with ten lines about the topic to help readers.

Long Essay on Death of a Salesman 500 Words in English

Death of a salesman strives to attain the American dream but not with hard work. The play is a series of the dramatic life of an American family who’s earning member tries to fulfil his American dream demanding elevation in workplace and life only with a charming personality. This socially unacceptable and unusual approach towards achieving the American Dream leads to the scene of the play.

Willy Loman is the central character of Death of a Salesman who lived in the 20th century. He has a small family comprising of wife Linda, and kids Biff and Happy. Willy is a salesman and desires to achieve the American dream of a fulfilling life based on charisma and personality. This illusion of Willy ends when he demands a promotion in his professional life based on his personality but loses his job because of such absurd claims.

Willy is a character who lacks determination, innovation and hard work. He has an illusionary world and lacks a sense of reality. He believes and tries to attaint great success effortlessly. On the contrary, Ben, Willy’s brother, is an accurate representation of the American Dream. Ben sets out to adventure in the jungle when he was seventeen years old. Ben was determined to get rich despite all the difficulties and challenges of the world.

Willy is the poor representation of the American dream, and Ben is the perfect example of the American Dream. As Willy never worked hard, he declines in his life due to the false perception of elevation. Willy dies with his dreams, and Ben lives his. After the death of Willy, his son Biff realizes his father’s mistakes and chooses to attain his dream in the perfect ways.

The tittle Death of a salesman justifies itself when Willy commits suicide disoriented from the irrecoverable mistakes of his life. People keep on responding to Death of a Salesman in light of the fact that Willy’s circumstance isn’t interesting: He committed an error — one that permanently changed his relationship with his loved ones. Willy fervently denies Biff’s case that they are both normal, ordinary individuals, yet unexpectedly, it is the comprehensiveness of the play that makes it so persevering. 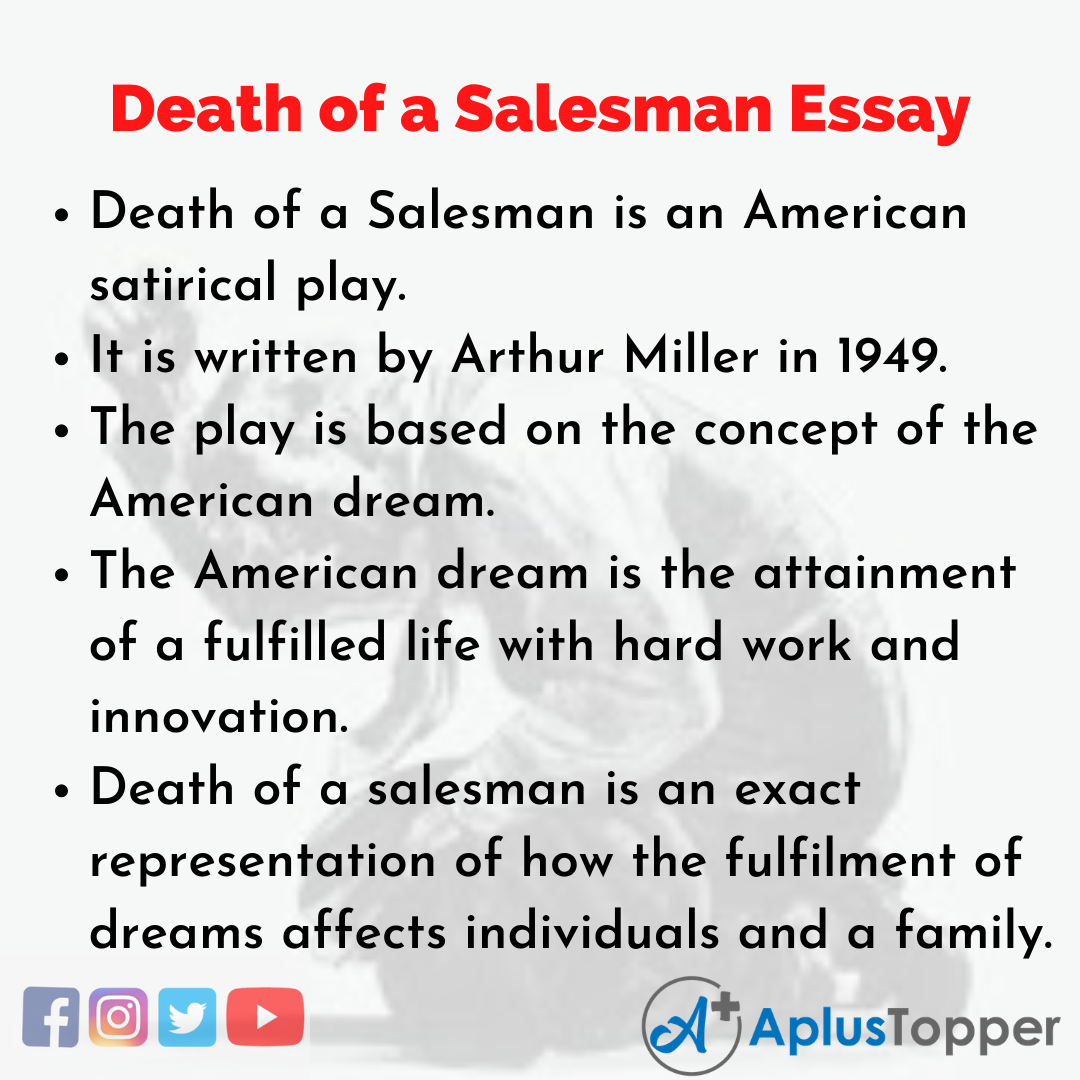 Short Essay on Death of a Salesman 150 Words in English

The key figure of the play, Willy Loman is an American dreamer who lacks a sense of reality. He believes in charisma rather than hard work and innovation—this mentality of his leads to his decline in professional and family life. With the burden of an irrecoverable mistake, Willy decides to commit suicide. Many readers might argue that Willy chose the easy way out. But the play is a representation of how miserable some people get on their way to achieving great things in life.

10 Lines on Death of a Salesman Essay in English

1. Death Of A Salesman is an American satirical play.
2. It is written by Arthur Miller in 1949.
3. The play is based on the concept of the American dream.
4. The American dream is the attainment of a fulfilled life with hard work and innovation.
5. The key figure of the play is Willy Loman.
6. Willy is a salesman who dreams of attaining his American dream but not by hard work.
7. Willy Loman believes in charisma and personality and lacks a sense of reality.
8. Willy fails to attain his dream of a fulfilled life and commits mistakes.
9. Willy chooses to commit suicide under his unbearable burden of mistakes.
10. Death of a salesman is an exact representation of how the fulfilment of dreams affects individuals and a family. 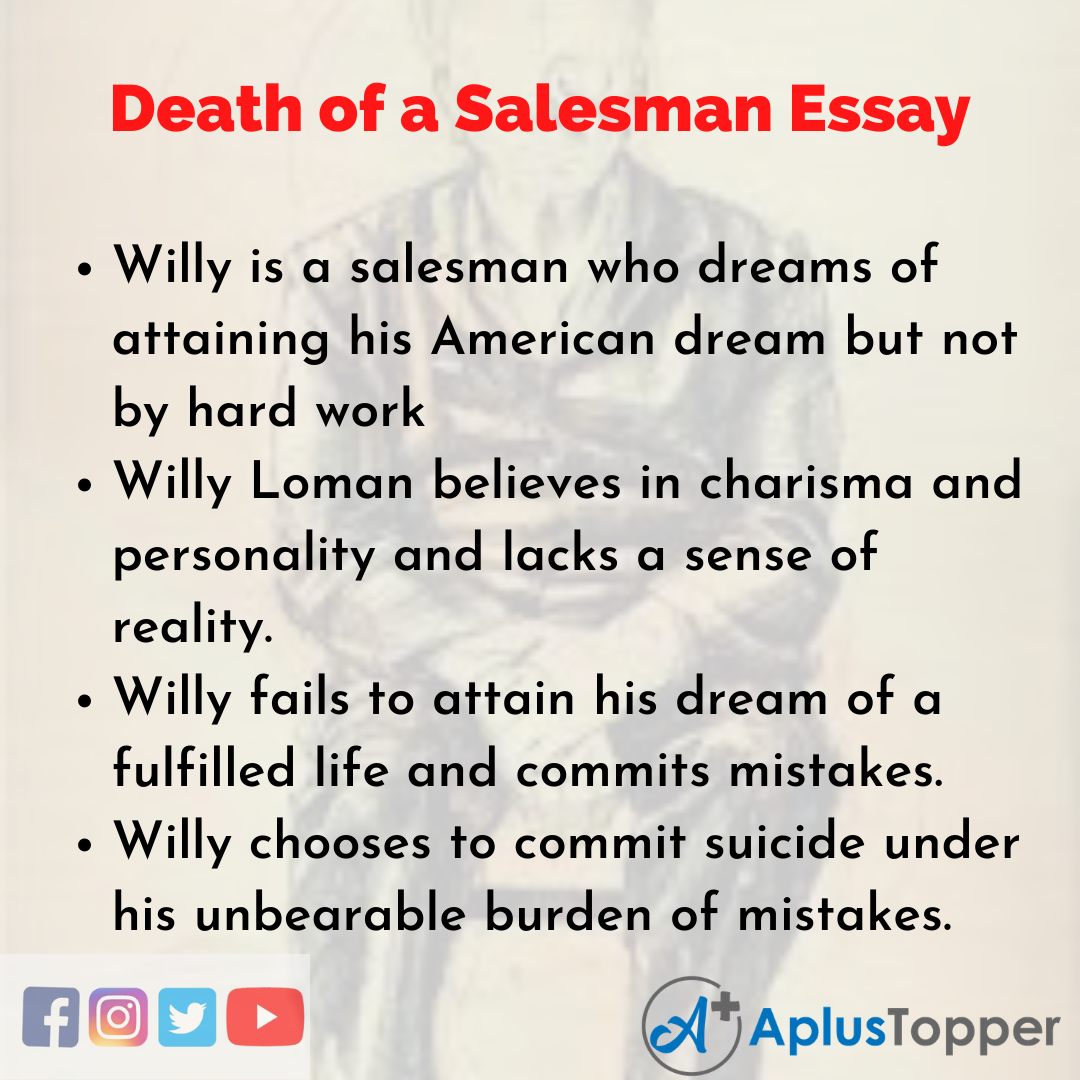 FAQ’s on Death of a Salesman Essay

Question 1.
How many acts Death of a Salesmanhas?

Question 2.
Is Death of a Salesman based on a true story?

Answer:
Death Of A Salesmanis a fictitious story written by Arthur Miller. However, one can relate to the experiences of the protagonist and his surroundings.

Question 3.
Is suicide of Willy in Death Of A Salesman justified?

Answer:
Willy had committed a mistake. If he could, he would have started afresh, but the fact that it was too late cannot be denied. Willy’s death is a literary representation of failure and mistakes.

Question 4.
Is it okay for a child to read the death of a Salesman?

Answer:
Death of a Salesman is a moral tale. Children can read the play, but parents and teachers must guide them with true meanings and try to derive positivity from it.