Cyber-bullying Essay: Young people today are mostly influenced by internet usage more than ever. They consider the internet and mobile phones systems as the two biggest frameworks of communication which play a vital role in our daily activities and development of identities.

On the other hand, these technologies are often used negatively. Many users are the targets of bullying via the internet resulting in total confusion on the part of the “target.”

We provide students with essay samples on a long essay of 500 words and a short piece of 150 words on Cyber-bullying for reference.

Cyber threats can be categorised into two main types: Cybercrime, which happens against an individual, corporate, etc. and Cyberwarfare, which occurs against a state. Cyberbullying may occur directly by targeting the computers and viruses or by using Denial of service attacks, which is an attempt to make a network or machine unavailable to its projected users.

A software called malware is used to gain access to a private computer, gather sensitive information, or disrupt computer operation. Cyberbullying is hiking up drastically as more and more users are victimised of this type of bullying, though not only teenagers. The problems of cyberbullying are saddening as the system that makes informational flow and communication easy, is turning into a dangerous “site” to be.

Cyberbullying does not pertain to only one country, but the entire world. The states of the U.S. have started to impose laws specifically on cyber- bullying. Some other nations support the regulations set for traditional bullying, which also covers cyber-bullying. The internet provides incognito and the chance to create a profile with a hidden identity.

Cyberbullying has more than one definition; thus cyber-bullying can be defined as art when the internet, cell phones or other electronic devices are used to send or post text or images intended to heart or embarrass other persons. A situation where a child or teen is repeatedly tormented, threatened, harassed, humiliated, embarrassed or likewise targeted. The last arena of cyber-bullying is referred to be cyber- stalking. It creates a situation, which includes threats, blackmail or sexual bullying, and the victim is ridiculed. Cyberbullies may post personal information of their victims at websites or victim’s name that demolishes or humiliates him/her.

Most of the times cyberbully work in groups because in that way they feel strongly united. However, they cannot move away from their team because they feel unsafe and have the constant fear that they will get cyberbullied themselves. As researchers recognise it, cyberbullies are sometimes likely to be more depressed than their victims.

Cyber-bullying portrays the ugly side of the internet. Victims of cyber-bullying suffer through severe depression and in extreme cases, even death. Therefore, the internet can be proved dangerous if not aware of its working and security as a whole. People mostly support the opinion of cyber-bullying, along with regular bullying, is the important reason for many of the social, anxiety and depression. Cyberbullying is less physical than traditional categories of bullying, but it has very impactful and influential effects on individuals. The government and the citizens should both spend awareness among the people to update their network security settings and their systems and use proper anti-virus so that their system and network settings stay malware and virus- free.

Deleting old accounts is a good way to secure someone’s information. In many cases, an attacker can easily access someone’s network by using their old credentials that have fallen by the curb. People mostly support the opinion of cyber-bullying, along with regular bullying, is the important reason for many of the social anxiety and depression. 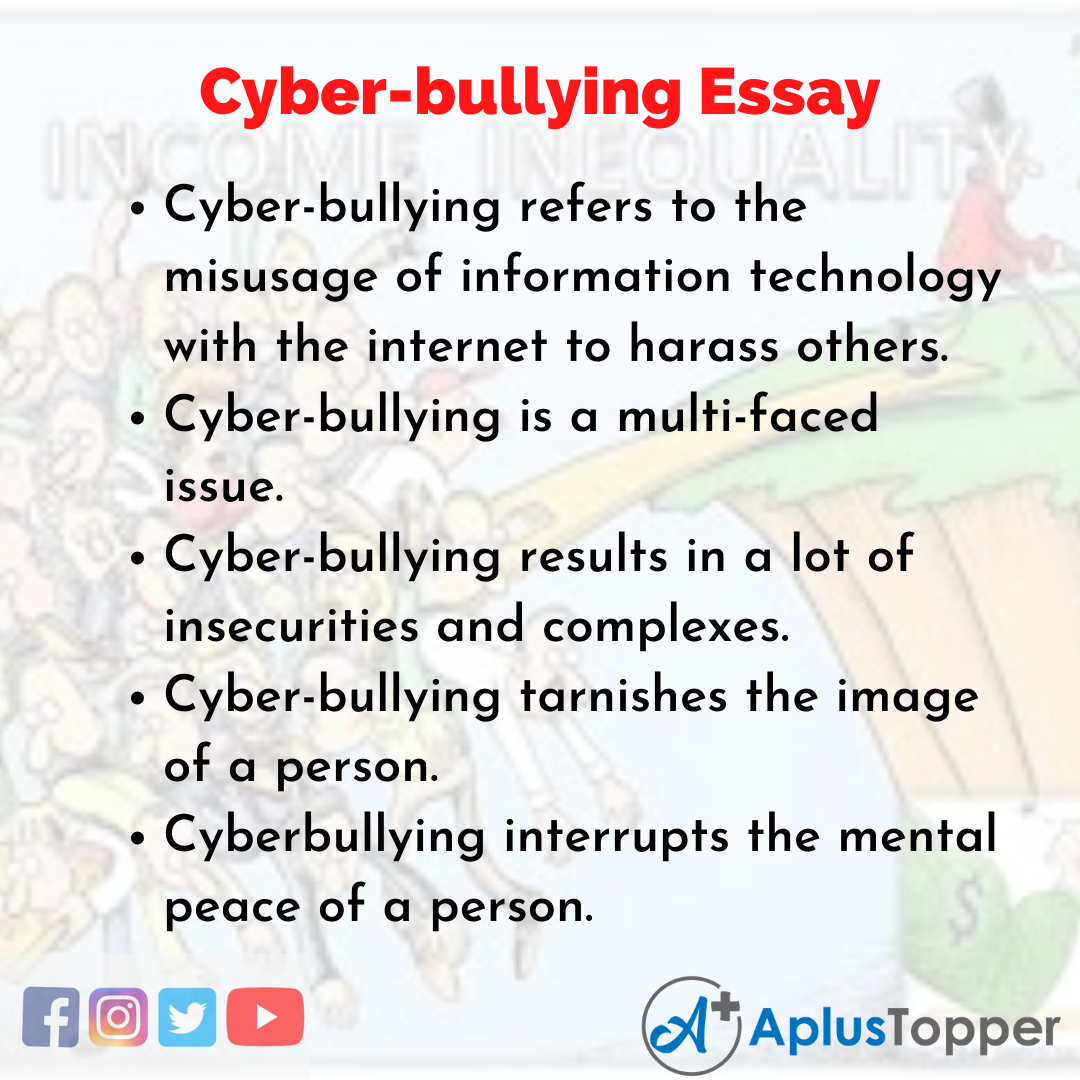 Cyber-bullying is mostly common among teenagers, children and occurs when one is threatened, harassed or humiliated with digital and interactive technologies. The methods used in cyberbullying are the only access to technology.

Cyber-bullying can result in detrimental effects on both the bully and the bullied. The worst consequences of cyber-bullying are the fatal impact of such instances. The other vital reason is that bullies are normally instigators in nature, and with the cyberspace, they can involve a large number of people.

Cybersecurity plays an important role in preventing some difficult and heinous crimes like blackmailing, fraud transactions through another account, leakage of personal information. It is the responsibility of every citizen to spread awareness among everyone and keep their system and network security updated to prevent cyber attacks from happening worldwide. Internet users should be properly educated on how to be immune to internet dangers.

10 Lines on Cyber-bullying in English Question 1.
What is cyber-bullying?

Answer:
Cyber-bullying refers to the misusage of information technology with the intent to harass others.

Question 2.
What are the effects of cyber-bullying?

Answer:
Apart from the usual mental and physical effects of cyber-bullying, it can take severe tolls on the health of the victim. It results in a lot of insecurities and complexes.

Question 3.
How can be cyber-bullying prevented?

Answer:
There are various ways of tackling cyber-bullying both in individual and authoritative levels. People should be aware of the anti-bullying laws in India. Cyberbullying victims can file a case under the India Penal Code.