Crime and Punishment Vocabulary: Crime is the act of committing an activity that is unlawful and is punishable by law. In the English language, there are various crime related words available. Each crime has a different meaning behind it.

It is quite necessary to have information about the different words to do with crime. Therefore, this article consists of a list of crime vocabulary words that will help you know more about each crime’s specific intention.

Being aware of the list of crimes is very important because if ever you are a victim of any crime, it will be easier for you to communicate with others if you know the exact name of the crime.

You will also be able to listen and talk about it since it is a ubiquitous topic. Knowing the crime vocabulary list will expand your vocabulary and help you talk about the matter in more detail. 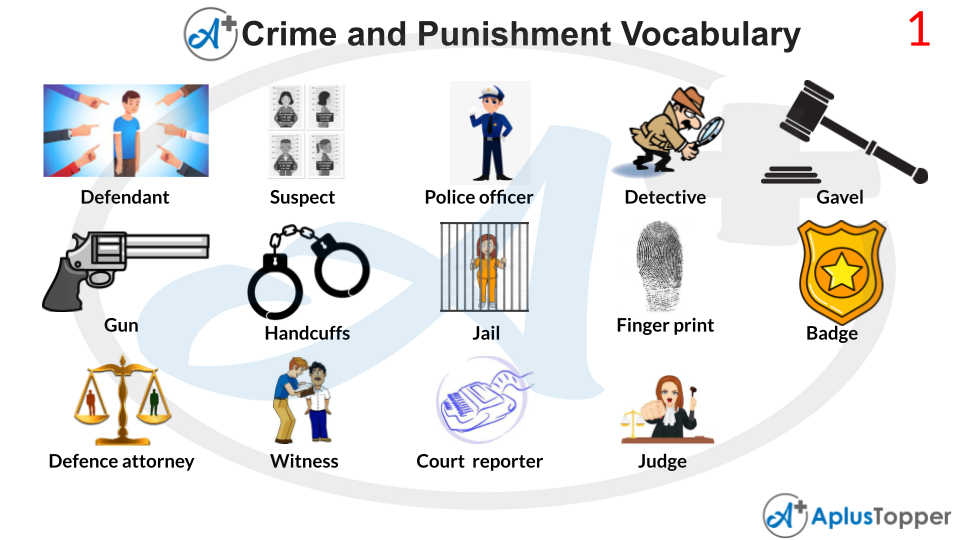 Description of the Crime Vocabulary Words

A judge is a person who controls court proceedings, either individually or as a part of a committee. Judges listen to every spectator and look into other testimonies presented by lawyers or attorneys of the case before passing any judgment.

The judgment is passed based on their interpretation of the law and their judgment. A judge also correctly evaluates the entire case and checks the truthfulness of the spectators and the testimonies provided by each party.

A defendant is a person who is either accused of committing a crime or is someone against whom civil relief is being sought.

A police officer is a certified government employee of the police division. They are sworn to an oath of protecting the common public from various criminal activities.

They usually report crimes, assist and protect the common public, and ensure that law and order are maintained properly. They have the power and authority to arrest and detain people, along with other duties and responsibilities.

A detective is a person who investigates cases and solves crimes. They are generally a part of the law enforcement agency, but they may also work privately.

Detectives gather proof and information regarding the case by talking to witnesses and searching records. After they gather enough evidence, they arrest the criminals and then present them in court.

A suspect is an individual who is accused of committing a particular crime. They are not criminals since the accusations are not confirmed by the court.

A witness observes the occurrence of a crime and acts as solid evidence of the crime. Sometimes witnesses are used for the testification of other witnesses. In law, it is someone who either voluntarily or forcefully provides testimonial evidence either in oral or written form. The evidence contains things that the witness claims to know or have seen.

Witnesses are generally brought in court trials of the specific case. There are different types of witnesses like an eyewitness, expert witness, hearsay witness, character witness, etc.

A lawyer is a person who practices, interprets, and applies the law in various situations. They are also known as advocates, attorneys, barristers, etc. Working as a lawyer includes applying abstract legal theories and knowledge to solve particular individualized problems or elevate the attention of those who hire lawyers to conduct legal services. According to different legal jurisdictions, the role of a lawyer also varies.

Also known as court stenographers, they use a stenographic device to capture the live testimonies presented in the court. They transform the proceedings into a transcript that is officially certified.

It is the act of illegally killing another individual without any justification or legitimate reason. Primarily an individual murders or kills someone else with malicious intent.

Murder is considered to be a grave crime. Therefore, a person condemned of murder should receive severe punishments like long-term imprisonment, a life sentence, or capital punishment.

Assassination is the act of killing a notable or influential personality, like politicians, celebrities, or heads of state and government. Political and military reasons are the leading causes behind the assassination. Other causes may include avenging grievances, monetary gain, security, passion for earning fame or confidential FBI direction.

It is an illegal activity where an individual or a group of individuals fire a property with malicious intent. Though the act generally involves the burning of buildings, the wilful burning of cars, motorcycles, forests, etc., can also be referred to as arson.

The activity is considered a felony, where if the risk of human life is involved, the penalty becomes stricter. One of the most common motives for committing arson is insurance fraud. In such instances, a person intentionally burns their property and lies about the cause to receive the insurance money.

Kidnapping is the act of illegally confining someone or transporting someone against their will. For kidnapping someone, the kidnapper may not use force or fear at all times. The perpetrator can either lure the victim or use a weapon to scare the victim and abduct them.

Kidnapping can include gagging someone, or tying them up, or even stuffing them in a box. The main motives behind this criminal activity are the demand for ransom or other illegal purposes.

An assault is an act where an individual is threatened with causing physical harm or unwanted physical contact. Since it involves crime and tort, criminal prosecution or civil liability may occur.

Smuggling is an act of illegally transporting people, items, and information out of a building or a house across the international border or into prison, violating rules and laws.

Robbery is a crime where something valuable is attempted to be taken away by force or by threatening and putting the victim in fear. According to general law, robbery is taking another’s property and permanently withholding the property by using force or fear. Different types of robbery include armed robbery, highway robbery, mugging, etc.

A gun is a ranged weapon designed to use a shooting tube, also known as a gun barrel. With the help of weaponry, one can shoot bullets or artillery shells. There are different types of guns.

People can also use guns to shoot water, gas, charged particles, etc. Varied sizes of guns are also available and are used mainly by military forces, police officers, and other army officers. Ordinary people also keep licensed guns with them for self-defense and protection.

The fingerprint is an indentation left by the friction crests of a human finger due to the presence of moisture and grease on a finger. The restoration of incomplete fingerprints from a crime scene is a crucial method of forensic science. Fixed indentations of entire fingerprints can be obtained by ink or other substances transferred from the peaks of friction crests on the skin to a plane surface such as paper.

Human fingerprints are detailed, almost unique, tricky to remodel and endure over an individual’s life, making them proper for long-term markers of human identity.

It is a small ceremonial mallet along with a handle and is used for calling attention or for punctuating proclamations and rulings. It is usually made of hardwood and symbolizes the right and authority of an official presiding officer.

A judge uses a gavel and strikes it against a hard surface that indicates the opening and closing procedures. It is used to declare that the judge’s decision is final and to maintain calm and order inside a court.

It is an accessory on which the emblem of an organization is inscribed. It is presented to those who have achieved notable accomplishments or given to people as a symbol of authority or respect.

Badges can also be given to someone as a sign of employment or as a means of identification.

They are made from metal, leather, rubber, plastic, etc., and are generally attached to clothes, bags, vehicles, etc.

Also known as jail, it is a building where people who have committed crimes are legally held as punishment. The criminal justice system generally uses prison to punish by confining them and denying them any freedom.

Not only criminals, people who are suspected or are waiting for their trial are also confined within a prison.

Handcuffs are a type of device used to restrain an individual. It consists of two parts that are linked together by a chain or a solid bar.

A handcuff secures the wrists of an individually close to each other, stopping them from escaping. Without the keys, handcuff removal is quite tricky, making the handcuffed person suffer because they can only move their wrists a few inches apart.

Police officers and other law enforcement officers use handcuffs to prevent escaping criminals and suspects from police custody.