Crime and Punishment Essay: One of the most popular works by the author Dostoevsky is the novel Crime, and Punishment covers a major theory about the extra-ordinary man. In this novel, the main role is played by Raskolnikov, who sets extraordinary justifications for his sins that he has committed. Raskolnikov is shown to have both physical and psychological illnesses, with the reason behind it being poverty and no food availability. The sole belief of Raskolnikov was that he must be arbitrated as an exception from the laws that are forced on all humans by ordinary men. The main reason that drove him to commit the murder of Alyona or the moneylender is his poorness.

We provide students with essay samples on a long essay of 500 words and a short essay of 150 words on the topic Crime and Punishment for reference.

Long Essay on Crime and Punishment 500 Words in English

His novels are known to be created with an intense relation towards the human soul that is stated to be mysterious. His novels are an excellent psychological analysis example of the darkest thoughts, ideas, and problems. The widely popular Crime and Punishment showcases a poor ex-student Raskolnikov involved in the premeditated murder of an old and rich pawnbroker. He justified his actions by claiming it was for the betterment and universal justice.

Although, despite his extremely high goals, Raskolnikov underwent mental and conscience torment for a huge amount of time before he finally decided to own up to his crimes and confess. One of the primary themes of the entire novel Crime and Punishment is confession since this is the most vital part of the novel that showcases some differences in the physical and mental state of Raskolnikov. Besides, it was not a new addition to the literature genre. It began in the early periods, such as 400 A.D by the St. Augustine confessions. The genres similar to that of this novel gained immense popularity during the nineteenth century in Europe. This genre has been used by most of the popular writers like Jean-Jacques in the eighteenth century.

Strangely enough, Dostoyevsky continuously mentioned the confessions of Rousseau, debating on the genre clarification of the latter. In the old times. The confessional genre has been known as a type of narrative where the confessor narrates the secret crimes committed in the past or scene and the rebirth and reform that led to depression and compensation through constant suffering. Moreover, at the beginning of the novel, Raskolnikov decided to murder Alyona Ivanova, a money lender. He solely believed moneylenders to be cruel and, thus, thought to have committed a heroic deed. He also thought that murdering a moneylender will help him to gain forgiveness for his forty sins.

The ruthless punishment that is described in the novel is the guilt that is felt by Raskolnikov after the committed sin. However, his sensibilities are recognized throughout the novel. Besides, he stresses about the sins of nineteenth-century Russia along with his sins. In this entire novel, Raskolnikov’s growth has been praised, especially his ability to own his sins and wrong beliefs. In the ending part of the novel, Raskolnikov decides to confess and accept his sins. He did not receive any brutal punishment for the crime committed. However, his guilt was considered the cruelest punishment or torment one can go through.

Raskolnikov finally becomes successful at obtaining his faith through a tough challenge and struggle from his pessimism, despair, nihilism, and disbelief. The love and the ability to accept his wrongdoing showcases the rewards he obtained for his acceptance and virtue. 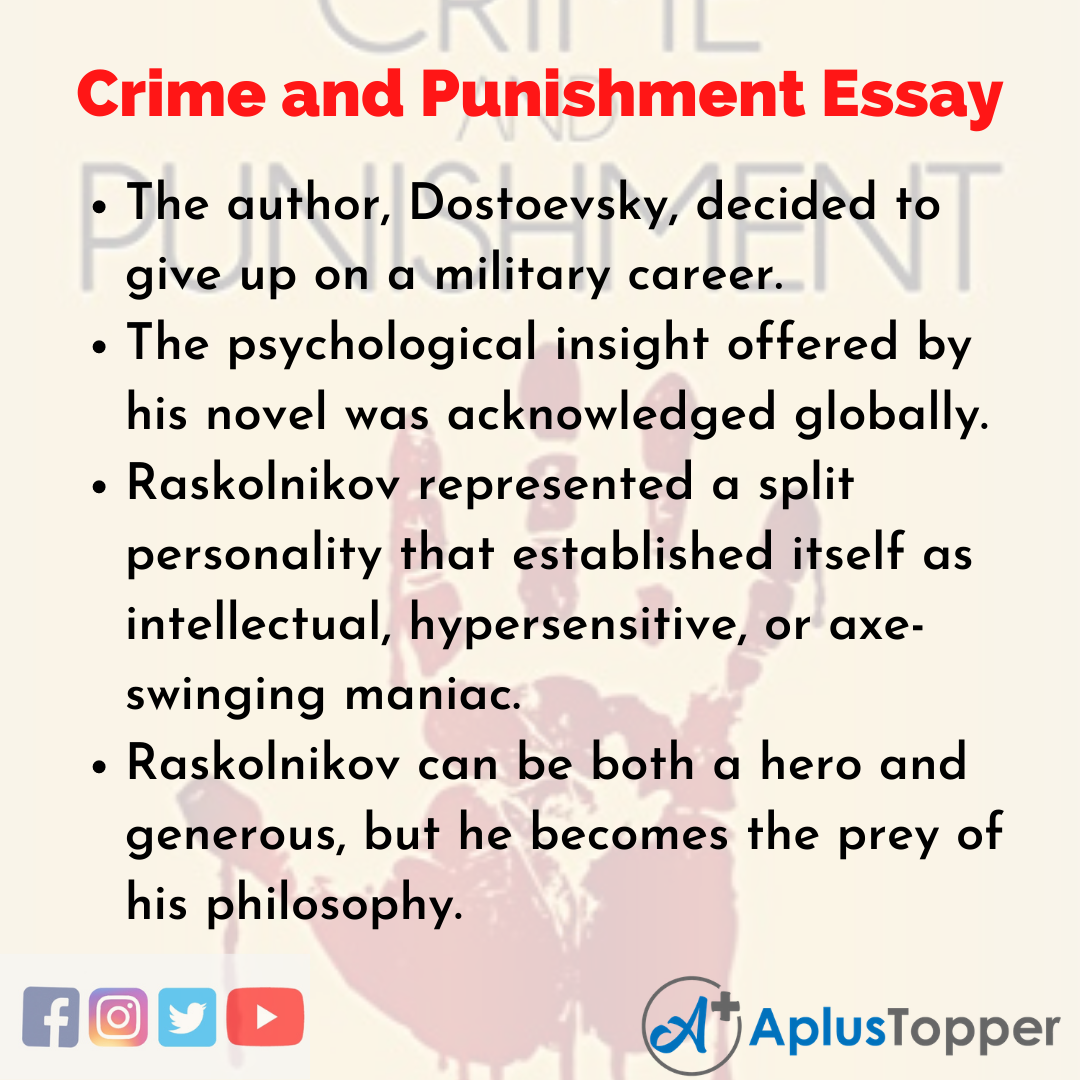 Short Essay on Crime and Punishment 150 Words in English

It is tough to categorize the protagonist of the story solely as a hero since he seems the opposite of that at the beginning of the novel. Since he is responsible for committing a premeditated murder all for the sake of money and his poorness.

He then justified his wrongdoings or the murder of the pawnbroker as social justice and for the greater good. However, he suffers from this guilt for years, which is tormenting for him. Besides, he also stresses his family’s well-being, sins, and the country that he resided in since he thinks thoroughly about the moral issues.

However, Raskolnikov eventually turns into a brave person, which is displayed through his actions at the ending of the novel. He starts accepting his sins and confesses it to the police. He chooses to compensate for the wrongs or sins that he has committed in the past.

10 Lines on Crime and Punishment in English 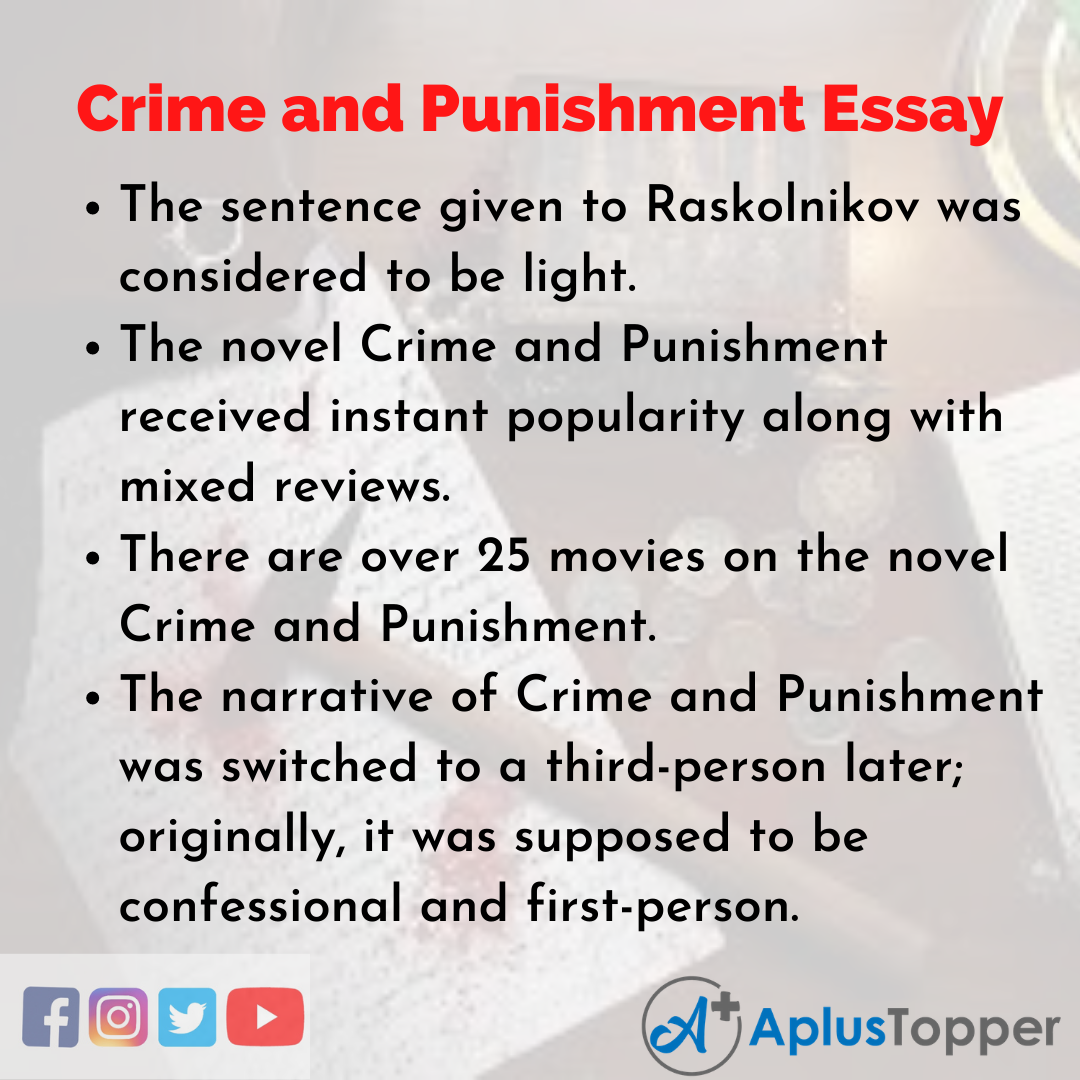 FAQ’s on Crime and Punishment Essay

Question 1.
Who did Raskolnikov decided to kill in the novel Crime and Punishment?

Answer:
Raskolnikov committed a premeditated murder of the pawnbroker Alyona.

Question 2.
Why did Raskolnikov decide to murder the moneylender?

Answer:
There are several reasons which led Raskolnikov to murder the moneylender. One of which is due to the requirement of money.

Question 3.
What is the cruel punishment described in the novel?

Answer:
Guilt is considered the cruelest punishment faced by the protagonist in the entire novel.

Question 4.
What is the primary theme of Crime and Punishment?

Answer:
Crime and punishment have one primary theme, which is alienation. The pride of the protagonist alienates him from the entire society.