Corruption Slogans: The abuse of authority or power for private gain by the people entrusted with it is called corruption. The degradation of moral values that reduces the honest valuation in people and prevents them from noticing the wrong done by them, it leads to corruption.

Almost every occupational field has faced the treacherous act of corruption because of some greedy people. An atmosphere of less hard-work and cheated results is formed when corruption starts from the people of a higher position and travels rapidly to people in the lower levels. Corruption can only come to a complete end when people realize the wrong of the act in their heart and abstain from doing immoral activities.

Slogans on Corruption in English

Corruption is one of the major hindrances in the growth of a region or nation, and it is a problem occurring throughout the world. The people in power are those who are involving or allowing fraudulent actions, and this is very shameful.

Corruption is the result of greed, and the only way to stop the acts of corruption is raising our voice against it whenever and wherever we witness it. The government should also make a law against corruption so that people become fearful about commencing punishable offence. 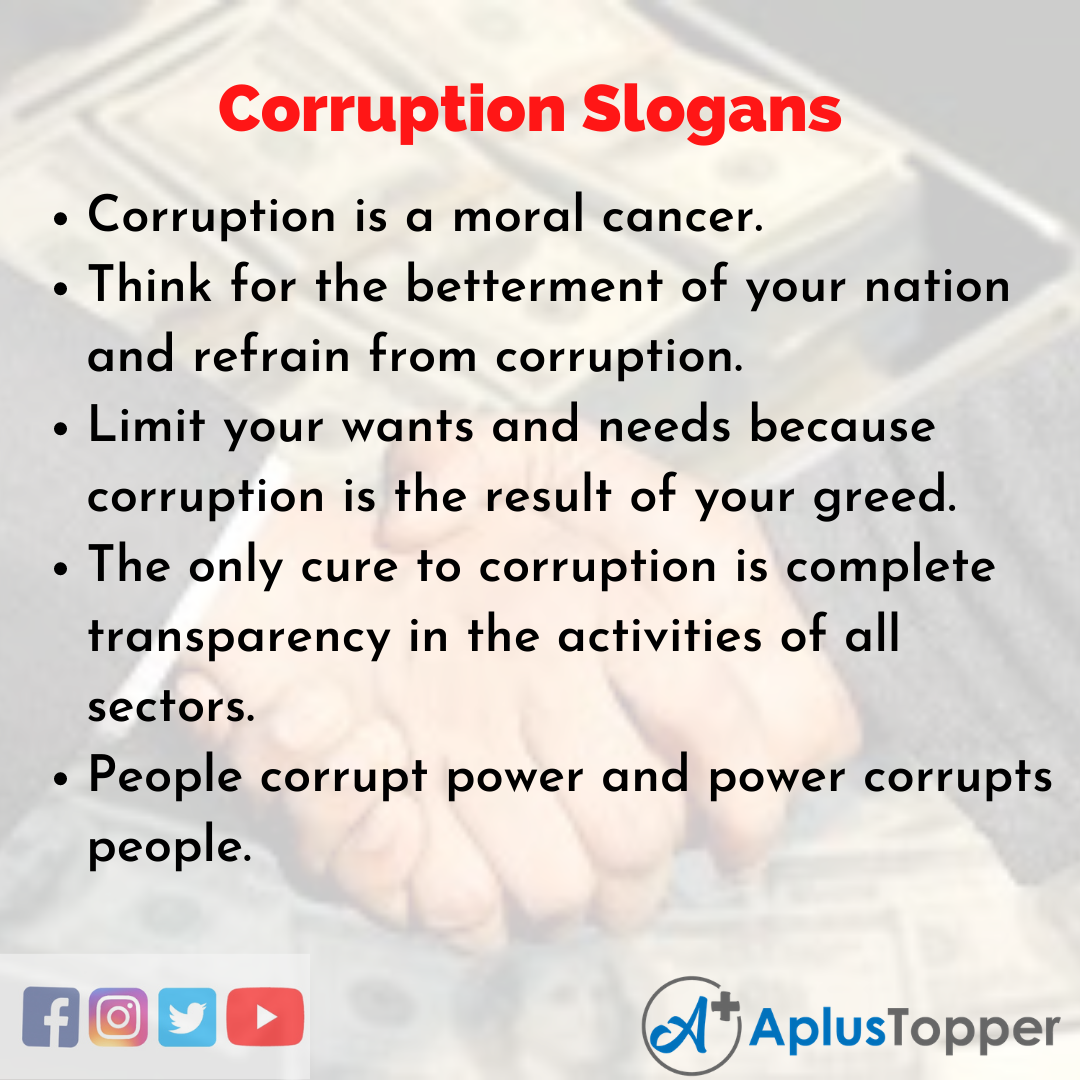 15 Unique and Catchy Slogans on Corruption

1. Corruption is a moral cancer.
2. Think for the betterment of your nation and refrain from corruption.
3. Limit your wants and needs because corruption is the result of your greed.
4. The only cure to corruption is complete transparency in the activities of all sectors.
5. People corrupt power and power corrupts people.
6. Don’t let your sanity perish because of doing corrupt activities.
7. We have to fight corruption because its supporters are very cunning tactfully.
8. We need to pull out all the weeds of corruption whose root runs deep.
9. In a democracy, there should be no room for corruption.
10. Shame on the corruption game that destroys a country’s name.
11. The culprit of hunger, misery and deprivation is the much-hated corruption.
12. Don’t proceed towards your own destruction and get rid of corruption.
13. Corruption is an absolute bane, fight it if you are sane.
14. Break your silence and protest against corruption.
15. Save the world from the trap of corruption. 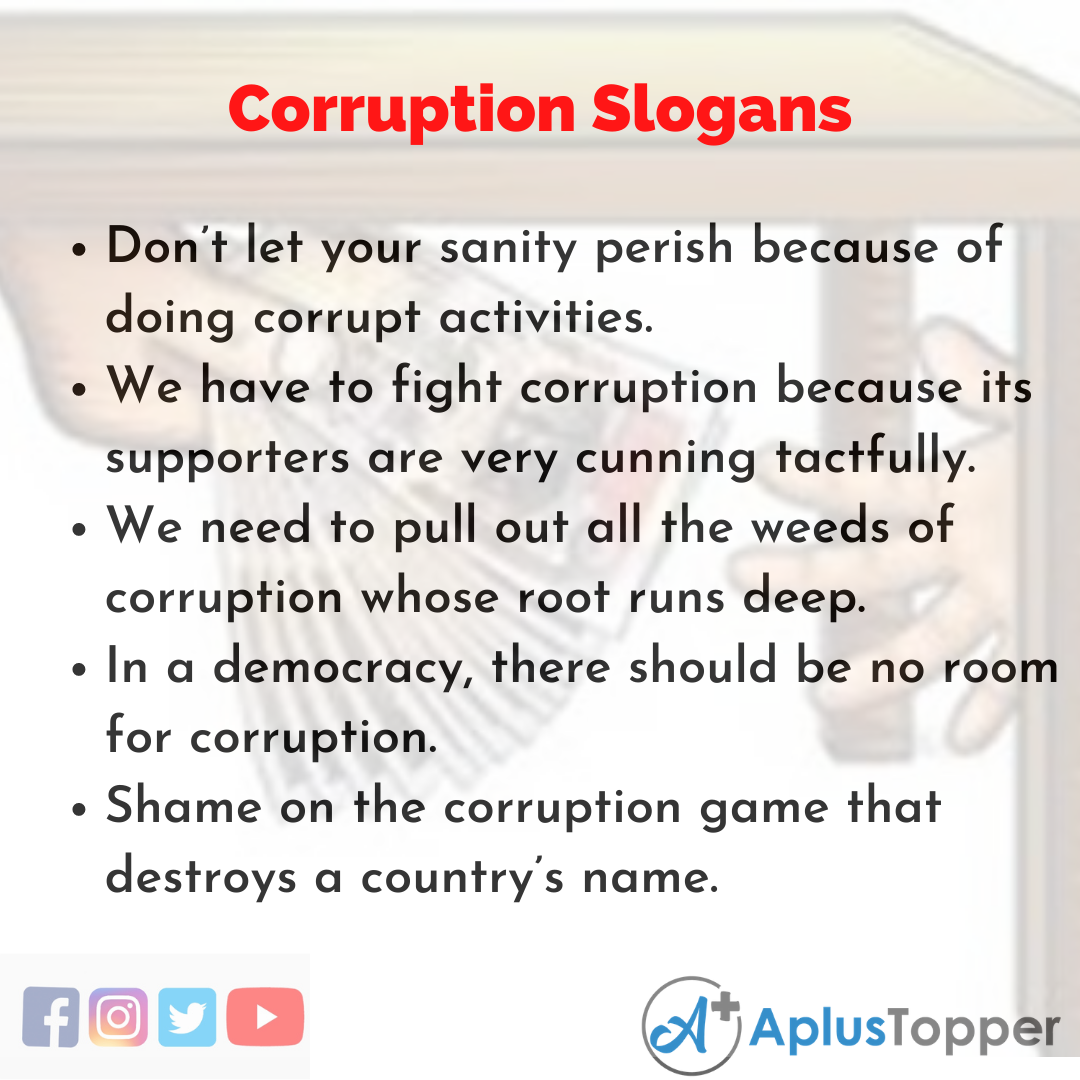 Question 1.
Can an individual associated with private corporations be guilty of corruption?

Answer:
Any individual can commit corrupt activities with some responsibility. Be it public officials or businessmen, politicians or industrial operators, and anyone can be guilty of corruption. The things that constitute being called corruption can be giving, offering, receiving or requesting advantages, if these are affecting the actions or behaviour of the other person in an unethical manner.

Question 2.
Is corruption a punishable offence?

Answer:
If the corrupt activities are reported, then investigation takes place, and if the form of corruption found is criminalized, then individuals involved might be punished by law. But the sad aspect about this phenomenon is that many incidents slip out under the eyes of the law because corruption is a widespread process and not all forms are considered a punishable offence. Some of the activities in public offices that are considered punishable offences that fall under corruption are bribery, fraud, embezzlement, abuse of inside information, and money laundering.

Question 3.
In which environment does corruption thrive mostly?

Answer:
The environment where an individual or a group of people have a monopoly over the total institutional power combined with an added level of discretion, is a perfect atmosphere for corruption to thrive. It is because such environments are characterized by the low levels of transparency, opaque decision making, and the lack of accountability and absence of checking or balance. Also, corruption thrives in the environments where the rewards for corrupt outcomes outweigh the consequences of doing something fraudulent.

Question 4.
How much does corruption affect the economy?

Answer:
Corruption reduces the efficiency in every department and increases the evil aspect of inequality. It is estimated that the cost of corruption is more than 5% of the global GDP, which equates to 2.6 trillion U.S dollars. The stats released by the World Bank shows that approximately 1 trillion U.S dollars are paid for bribes every year. Hence it is evident that the damaged caused by corruption is very severe.

Question 5.
How will transparency help in stopping corruption?

Answer:
Shedding light on plans, rules, procedures, and action is called transparency. If everything is set out on the table, and everyone is made aware of the why, how, what, and how much, then there remains no chance for corruption.