Corruption Essay: A form of dishonesty or criminal offense undertaken by a person or organization entrusted with a power of authority is known as corruption. Corruption is practiced to abuse power for one’s gain or to acquire illicit benefit.

Corruption may include many activities, such as embezzlement or bribery. However, it may also include practices that are legal in many countries. Corruption is evil, decays trust, and showcases the dishonesty of the person in authority.

We provide students with essay samples on a long essay of 500 words and a short essay of 150 words on the topic of corruption for reference.

Corruption is the abuse of entrusted power by a person or organization for personal gain. It is an act of dishonesty and a criminal offense. An act of corruption includes the exploitation of the rights and privileges of others. Activities like bribery and embezzlement are primarily included in the act of corruption.

Corruption can take place in ways. People in a position of authority are susceptible to corruption. Corruption reflects the greedy and selfish behavior of the person in authority. Bribery is the most common way of corruption. Bribery is the act of improper use of gifts and favors in exchange for the person’s gain. There are various ways in which people in authority accept ‘favours.’

Favors may include offers of huge amounts of money, materialistic gifts, company shares, entertainment, employment, sexual favors, and political benefits. Personal favor may also be a person’s preferential behavior overlooking crime or dishonesty. Embezzlement refers to an act of withholding of assets to prevent them mainly for theft. It is carried out by one or more individuals who are in charge of the asset. Embezzlement is typically a type of financial fraud.

A global form of corruption is graft – which is the illegal use of a politician’s authority for their gain. Misguiding the funds of the public is a popular way of grafting for the benefit of politicians. Extortion is another method in which corruption is practiced, which refers to obtaining money and property service illegally. This obtainment takes place by pressurization from an organization or individual. Extortion is similar to an act of blackmail.

Nepotism and favoritism is an old form of corruption that is still practiced. In this process, the person in authority chooses or favors the individual who will be of personal gain, or the individual offers something in exchange for the favor. Preferring a friend or relative in the job is an act of favoritism. This is a very unfair practice for the people who deserve recognition and appreciation and are not given the opportunity. Another method of corruption I the abuse of discretion in which a person’s power or authority is misused, such as a judge unjustly discriminating the case of a criminal. Influence peddling is another method of corruption. It refers to illegally using one’s influence with any authorized individual or the government. This practice takes place to obtain favor or preferential treatment.

Corruption weakens trust, hampers economic development, erodes democracy, and further worsens pre-existing conditions like poverty, inequality, environmental crisis, and social division. Corruption can be prevented even if not stopped. Tough laws are very important for the prevention of corruption. Guilty individuals should be given strict punishment, and the laws should be efficient and quickly implemented.

The government must ensure that the inflow is kept low. Due to accelerating prices, many people feel that their income is low, this increases corruption among the masses. One important way of preventing corruption is by offering a better salary. However, these are just reasons. Anyone determined to stay loyal to their jobs and they will not practice corruption no matter how many opportunities they are given. 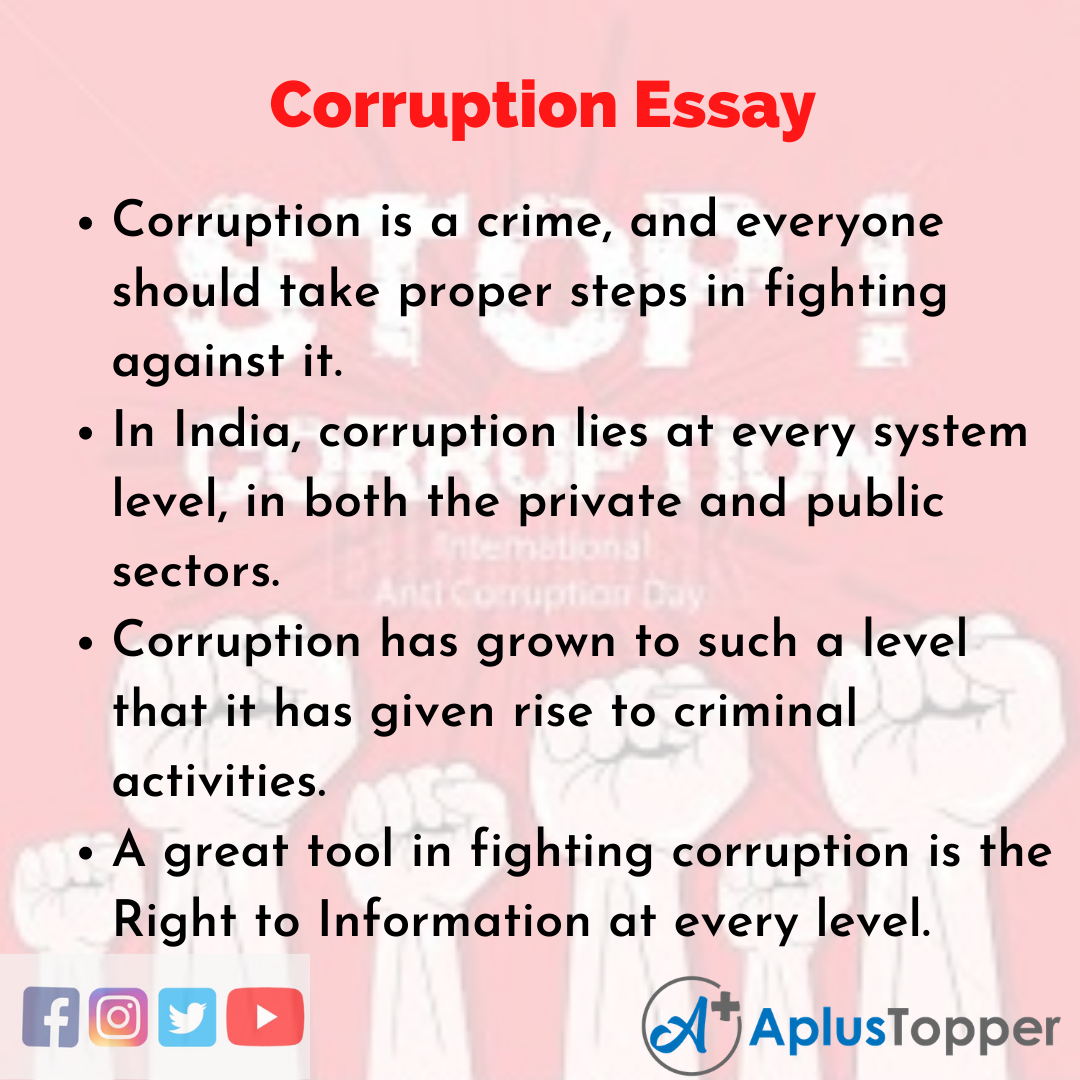 Corruption is dishonest behavior practiced by those who are in authority. It is the misuse of entrusted power for private gain. Corruption can happen anywhere – in businesses, offices, courts, media, and even civil society. Corruption can involve anyone – from government officials, politicians, public servants to business holders, or public members.

Exposing corruption and holding the corrupt accountable can only take place how corruption works, and the systems enable it is understood.

Corruption can occur on different scales, ranging from small favors between a small number of people to acts of corruption that affect the government on a large scale. Corruption has become prevalent and a part of everyday life in society.

10 Lines on Corruption in English 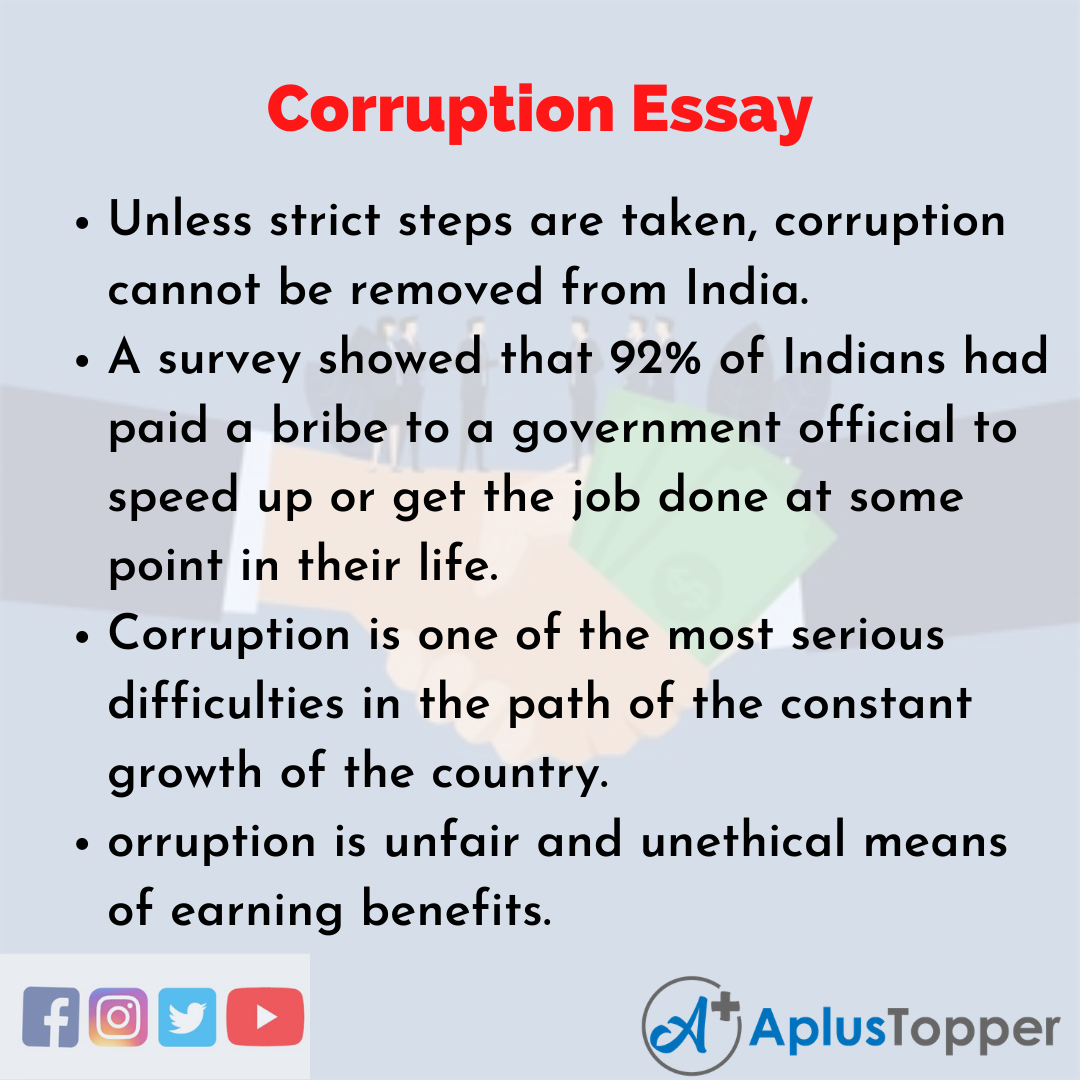 Question 1.
Which is the most corrupt country in the world?

Answer:
The most corrupt country in the world is Somalia, followed by Sudan and Syria.

Question 2.
Which is the least corrupt country in the world?

Answer:
As per the corruption index table, Denmark is the least corrupt country in the world.

Question 3.
What is one of the main causes of corruption?

Answer:
The greediness of people in an authorizing position is one of the main causes of corruption.

Question 4.
Talk about corruption in India.

Answer:
According to the Forbes list of the five most corrupt countries in Asia released in 2017, India ranks top. India has a bribery rate of 69%.