Sometimes the consumers do not get what the seller promises them. In that case, they are being deceived by the seller or the manufacturer. Consumerism is their combined efforts of the consumers seeking redressal and remedy for their dissatisfaction with the product.

Consumerism, in short, is the process of seeking redressal against sellers who deceive the consumers. It is a social effort whereby all the consumers seek remedy against the products and services that have dissatisfied them or realises a much less value from the product than promised by the seller. Consumerism can be simply defined as the effects of equalizing the level of satisfaction with purchasing worldly possessions. The world we live in is much controlled by the choices and the preferences of the consumers. Without consumers, it would have become difficult for manufacturers to survive in a highly competitive market. A consumer prefers those products that provide them with utmost satisfaction. When a consumer is deceived by a seller and seeks redressal, it is called consumerism. The word consumerism emphasizes the consumers’ satisfaction level and their tastes and preferences.

Consumerism has existed from the beginning of the industrial age. It gives utmost importance to the prevention of the public from illegal and deceiving marketing practices. It is considered as a social movement and not just a protest by an individual customer. Consumerism is never against the idea of companies making profits, but it is a movement against those who make profits by deceiving consumers.

Consumerism will not exist if the business houses follow the norms of product delivery and conduct legal marketing practices in the areas in which they operate. Consumerism directly affects the goodwill and reputation of the company and makes it difficult for the company to survive in the market. All the companies should take a proper step for the consumers who seek redressal and see to it that their products satisfy the consumers as promised in their advertisements.

Consumerism is not a concept that has arrived in the modern age. Instead, consumerism has existed for ages. The false agendas of the sellers have deceived people from the beginning of the industrial era. People have become more friendly with the term and concept of consumerism in recent times. Consumerism is a simple concept that helps prevent consumers from the unethical marketing practices of private and public companies.

With the rapid change in the way of doing business and industrialism, the importance of the term consumerism grew more. The concept came into existence in the early 1900s when the meat vendors packed and sold meat in an unhygienic manner. During the 1960s the importance of consumerism grew more as people by that time were more educated and wanted a good quality of products. They were more concerned and enlightened by the standard of goods and services being delivered to them by the sellers.

In the year 1962, the government passed legislation to protect consumers against unfair trade practices and advertising. Consumerism proliferated when issues regarding the unsafety of automobiles, causing the death of people increased in the United States. With this, the government passed different legislation that asked automobile companies to adhere to the safety norms of vehicle production.

After a few more years, the companies, after being heavily criticized for their unfair policies, set up a few customer care cells to attend to the customers’ disputes and allegations. These cells made it easier for companies to communicate with the consumers and help them with their problems. It also protected the reputation of the companies by providing on-time redressal of the customer’s problems.

In India, consumerism has been for the past few years. A few years ago, under the Food Adulteration Act, the government set up inspection departments in each state of India to ensure that the food items are free from adulteration and are prepared in a healthy and hygienic environment. The primary reasons that gave a push to consumerism in India are a short supply of products, increasing prices, inferior product and service quality, etc.

Consumerism helps the consumers to seek redressal for their grievances against the unfair policies of the companies. It teaches the consumers about their rights and duties and helps them get better quality of products and services. Lastly, it can be said that consumerism is good when it is used in an appropriate manner. 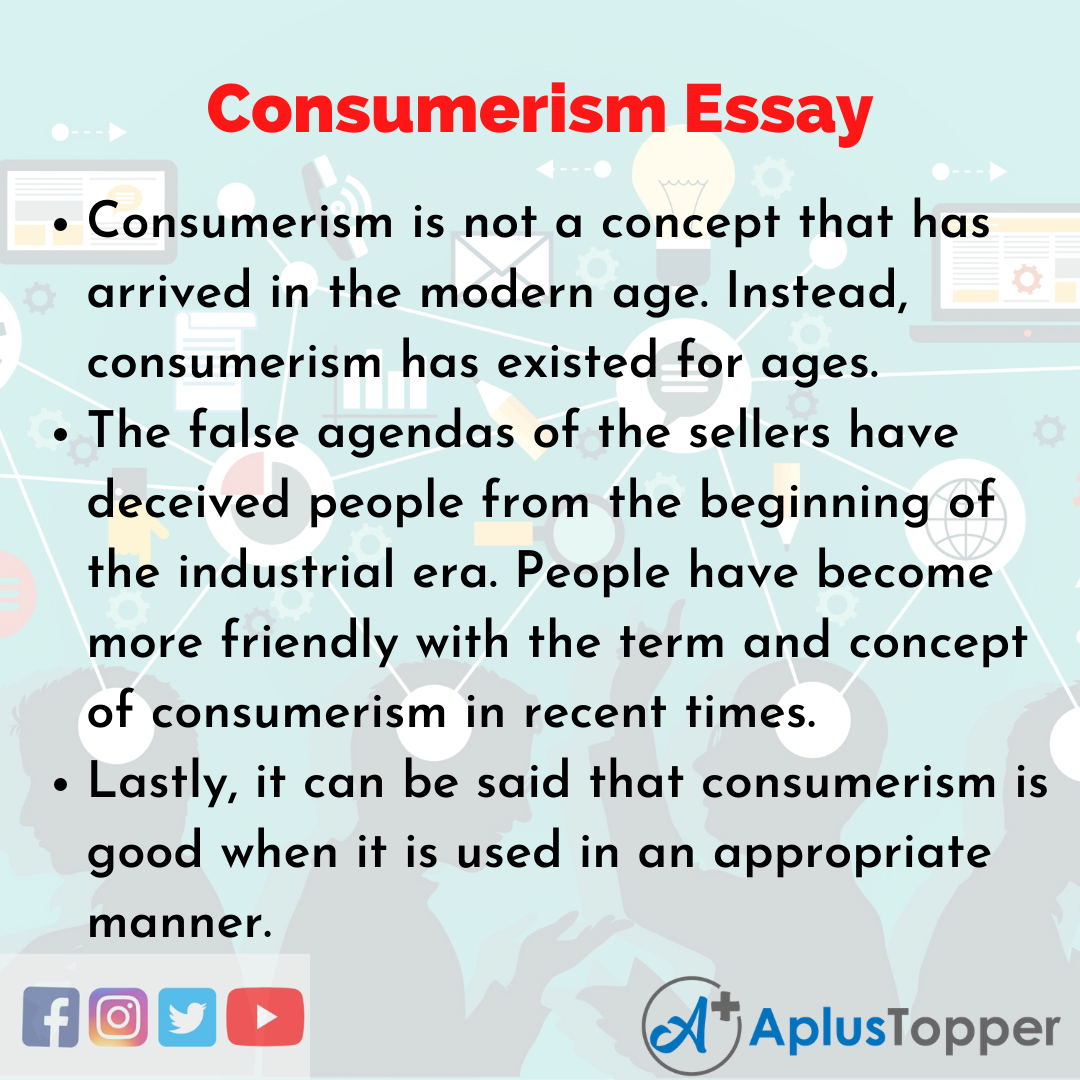 Consumerism is a simple word, yet it has a deep meaning and keeps utmost importance for the consumers. It deals with the rights of the consumers and helps to protect them against unlawful marketing and trade practices. It is the most delicate issue of today. As consumers today are well educated, and they know what they need for their consumption. The people have become more advanced and well-informed, and they know how to protect themselves from unfair product advertisements.

The word consumerism came into existence in the early 1900s, when the concern about the unhealthy meat supply came to public notice. By the beginning of the 1930s, the consumers became more enlightened and educated about their rights. This led to the increasing importance of consumerism. Even during the year 1936, the government came up with certain acts and regulations to control the marketing mal-practices made by certain companies.

With the growth and development of industries, the importance of consumerism grew even stronger among consumers. It became a social-movement in many developed countries in the mid-1960s. The government of many countries came up with different legislations to protect the rights of a consumer. They also set up courts to punish corrupt business houses and protect consumer rights.  The companies were strictly ordered to adhere to the regulative norms of product manufacture and delivery. Many companies even had to set up customer care cells to help the customer with their grievances.

In India, Consumerism is still in the infancy stage, and therefore the consumers need more support from the government to protect their rights as a consumer. In India, the shortage of essential commodities occurs more often, which leads to black-marketing and corruption. Most of the sellers advertise their products to sell off their finished products at a good profit. They don’t advertise with the view to serve the public. Most of the consumers are not well aware of their rights, making them easy victims of these black-marketers and corruptions.

Customer orientation should be made compulsory in countries like India to make the people aware of their rights and duties as consumers. This will also help them to safeguard themselves from unfair trade practices.

The act for consumer protection was passed in the year 1986 in India. This act helps to seek redressal for consumer grievances. The Consumer protection act of 1986 is applicable to all types of goods and services in India. Under the act, the government of India has set up courts in each state to listen to the problems and grievances of the common people and provide justice.

Consumerism is never against monopoly markets or profit-making. It has nothing to do with the foreign exchange control measures, but it is only there for the protection of the consumers. Lastly, to conclude, It is the duty of the government and the businessman to provide good service and quality products to the consumers. And consumers should also be aware of their rights and duties to stay protected from unlawful marketing.

In conclusion, it can be said that consumerism is a vast concept, and it helps to provide the customers with their desired products and services. It also helps them to seek redressal for their grievances. It makes them aware of their rights as consumers and helps them raise their voices against corrupt sellers.

Consumerism is a vast concept that includes not only consumer protection but also environmentalism. It protects the wastage of natural resources that are scarce. It states that the natural resources of a country must be well conserved for its economic stability and growth.

In simple words, consumerism is a boon as well as a curse to society and to companies operating in society. If used in a rightful manner, it will act as a blessing for both the company and the consumer. But if the consumers misuse it, it can take a dramatic turn and ruin the name and fame of a company. The government has to take the right initiative for the benefit of both consumers and businesses.