Consequences of Global Warming Essay: Global warming is considered as the long term heating of the earth’s climate system. This phenomenon is observed since the pre-industrial period, which is between 1850 and 1900. Global warming is caused due to human activities like burning of fossil fuel and extraction of harmful gas into the air, which increases the amount of greenhouse gas present on-air. Greenhouse gases are considered as heat-trapping gases, and they block the heat inside the earth’s atmosphere, causing the temperature to rise. Here are some essays based on the topic ‘Consequences of Global Warming’ of varying word length that might help you in the exams.

We provide children and students with essay samples on a long essay of 500 words and a short essay of 150 words on the topic “Consequences of Global Warming” for reference. 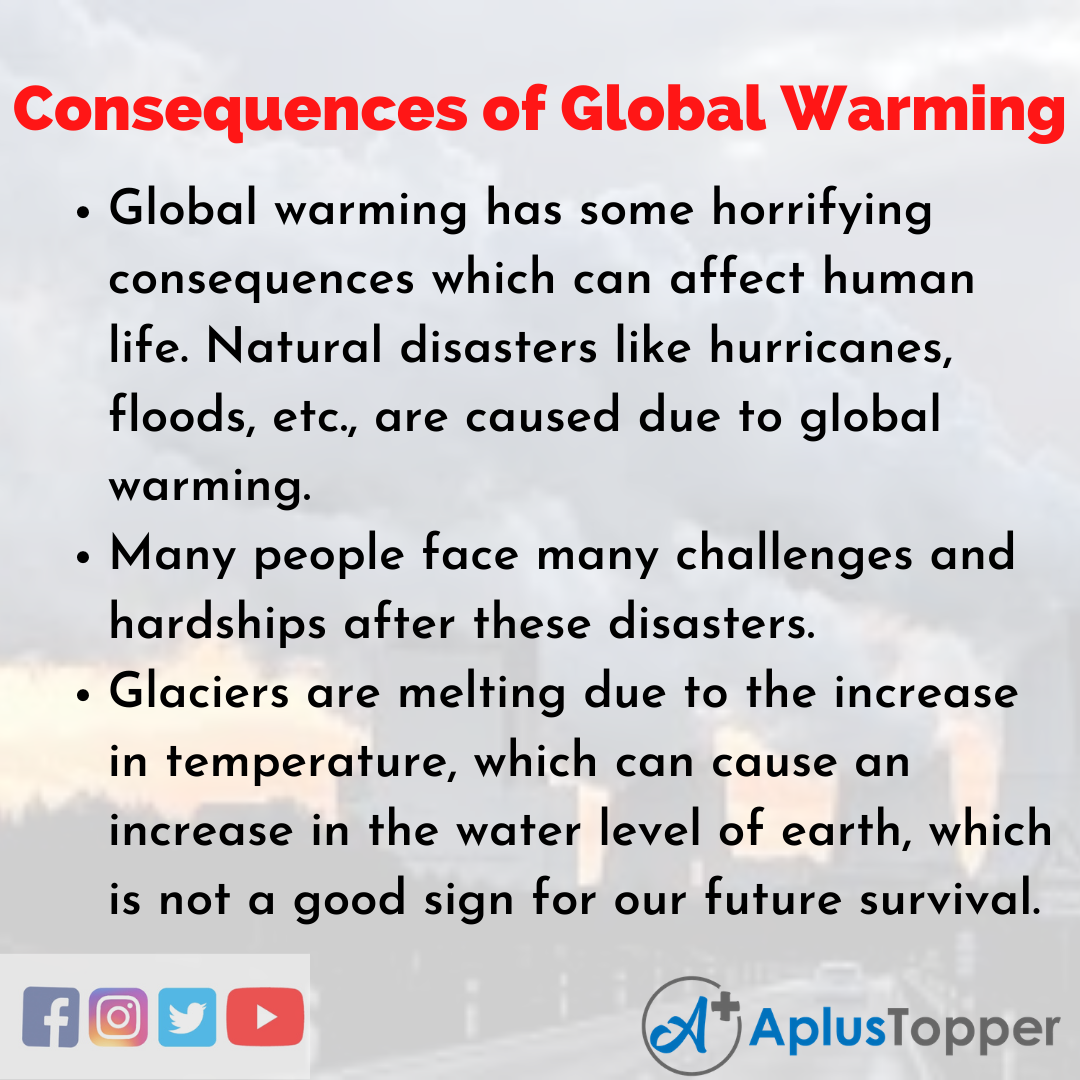 Short Essay on Consequences of Global Warming 150 Words in English

Global warming is considered as the cumulative rise in temperature of the earth’s atmosphere at an alarming rate. This rise is getting witnessed for an extended period of time. It is caused due to the increase in the level of greenhouse gases in the atmosphere. These gases have the ability to trap heat on earth and increase the temperature of the atmosphere, which is causing global warming. The sole reason for this increase in greenhouse gases is human activities like deforestation, harmful gas extraction from automobile and industries, burning of fossil fuel and many other reasons. Humans are exploiting the natural resources of the environment, which is why they are facing such trouble.

Global warming has some horrifying consequences which can affect human life. Natural disasters like hurricanes, floods, etc., are caused due to global warming. Many people face many challenges and hardships after these disasters. Glaciers are melting due to the increase in temperature, which can cause an increase in the water level of earth, which is not a good sign for our future survival.

Keeping all this in mind it is better to start taking steps towards controlling the global warming so that the earth’s temperature will come to a normal stage and people will be saved from all the future disasters that might happen if we keep ignoring the effects and consequences of global warming.

We are not unaware of the fact that the temperature of the earth is increasing every year and at some point of time in the future it will become impossible for us to survive in this temperature. The only reason for this temperature rise is global warming. Global warming is caused due to the increase in the level of greenhouse gases like carbon dioxide, carbon monoxide, nitrogen oxide, etc. in the earth’s atmosphere. These gases are getting released into the atmosphere because of various human activities. Many harmful gases are getting released into the atmosphere every day, which is polluting the air around us.

Every year we are breaking records in touching the highest temperature so imagine earth’s atmosphere after 20 more years. We have started seeing the consequences of global warming such as forest fires, droughts in different places due to lack of rainfall, floods, hurricanes and many more natural disasters. These disasters are making human Life difficult. In last some year, the world has seen many deaths of living organisms due to these natural disasters.

The water level is rising due to the melting of glaciers in the north and south pole, which is dangerous for the future. Due to global warming, oceans are becoming warm and acidifying, which is causing harm to water bodies living in the oceans. Unless we are taking some strict steps to control global warming, it is impossible to avoid such disasters.

There is still time for humans to realise their faults and try to rectify it by controlling the emission of harmful gases into the air. This will somehow decrease greenhouse gases in the atmosphere; thus, the temperature of the earth will drop. This can give some hope for human survival in the future or else it will gradually become impossible to survive on earth. 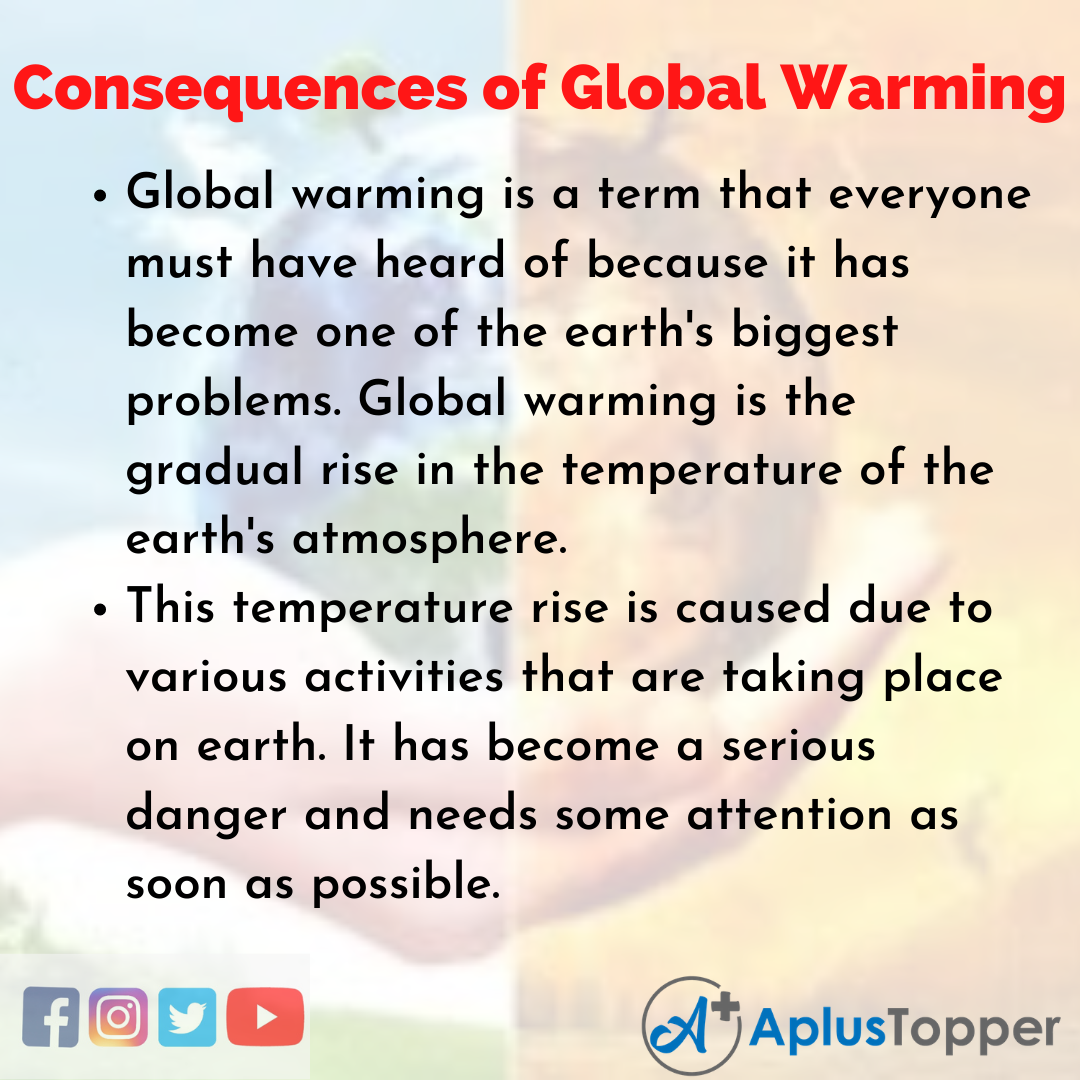 Long Essay on Consequences of Global Warming 500 Words in English

Long Essay on Consequences of Global Warming is usually given to classes 7, 8, 9, and 10.

Natural disasters like volcanic eruptions cause global warming because it releases tons of harmful gases into the atmosphere that pollutes the air. Air gets polluted when there is a rise in the level of greenhouse gases in the atmosphere. This gases are harmful and trap heat which causes the temperature to rise. Some human-made activities that are causing global warming are the emission of toxic gases, excessive use of the automobile, burning of fossil fuels, deforestation, etc. If these human-made activities are not controlled, then it can harm the atmosphere, which is not suitable for survival.

The earth is facing a lot of consequences for global warming. The earth’s atmosphere is deteriorating each day, and no one cares. People are still doing the same things that are causing harm to the atmosphere, even if they are aware of the consequences. Earth is facing an increased number of natural disasters like flood, hurricanes, drought, landslides, etc., and all this is the effect of global warming. Due to the increase in temperature for global warming, glaciers are melting, which will cause an increase in the water level, which will result in a flood. Forest fires which are caused due to the high temperature of the earth’s atmosphere are destroying flora and fauna. Recovering from all this destruction is not easy.

Global warming with the passage of time will start affecting the survival of human beings on earth, so before this happens, it’s better to buckle up and try things that can stop or control this global warming. There are many ways to prevent this rise in temperature, so we need to execute that in order to control it. It’s time to take global warming seriously or else the future of humans on earth is in danger. Global warming should be stopped or controlled as soon as possible.

We are all aware of the climatic change that the world is witnessing from the last few years. Our climatic system depends on the wind pattern, humidity, atmospheric pressure and temperature of the earth—different areas in the world experience different types of climate such as dry, moderate or tropical. Now the climate is changing in a weird way; for example, in rainy seasons, we are experiencing heat which shows that there is a disruption in the atmosphere or the environment around us. The sole reason for such disruption is the increase in global warming. To live a healthy and secure life, it is mandatory to start taking steps to control the rise of global warming.

According to research, it is proved that the temperature of earth has increased one degree Celsius in recent years. Many will think that this small increase is manageable, but no one is aware that this small change can bring massive consequences upon us. And the temperature is increasing every year, each day is getting hotter than the previous day so just imagine earth after 20 more years, it will become a place where humans can’t survive. So this increase of one degree Celsius should be considered a  waking alarm for us to take steps in controlling global warming to stop the upcoming consequences.

Every year we are breaking records by experiencing the highest amount of heat. This is not a good sign for our survival. People will start dying from different diseases because of this heat. The extreme conditions are becoming the reason for many natural disasters which are destroying our atmosphere as well as the environment. Natural disasters like hurricanes, drought, flood and forest fires are becoming common for some areas of the world. If immediate steps are not taken then, these disasters might wipe out whole cities or regions. For instance, you must have seen the destruction caused due to Amazon forest fires. A lot of animals died in this incident. Many people are predicting that this will happen continuously if global warming is not put under control.

Another consequence of global warming is the melting of ice caps and glaciers. This melting will cause an increase in the water volume of different oceans. Due to this reason, people are witnessing a rise in the sea level also. So it is clear that with the increase in temperature, the glaciers will melt and put the low lying areas in danger. Coastal cities will also come under the danger level category.

Global warming is a phenomenon that the world is witnessing from years, but in present-day, the increase in global warming is unimaginable, which has made it a big concern. If this phenomenon is not controlled, then it might turn the earth into a place where humans can’t survive.