What is Collection and Organisation of Data

Mr Gupta has done a survey in a reputed school to find out the favourite game of the students.
The information collected from the students of Class VI to Class XII are as follows:

From the above table, we can easily visualise the following information:
(a) Number of students present on the day of survey.
(b) Which game has got the maximum popularity?
(c) Which game has got the minimum popularity?
(d) What is the fraction of the number of students who like badminton?
The initial step of any investigation is the collection of data. It may be a collection of numbers, figures, facts, or symbols. The information needed or the data collected must be relevant to the need. Collection of information in the form of numerical figures is called data. Literal meaning of data is known facts or facts collected to draw some inference.
There are two types of data—primary data and secondary data.

Use of Data Collection

In order to preserve data, we need to collect the data, organise them, and record them so that whenever we want to use the information, we can refer to it.
For example,
(a) Taking attendance by the teacher in the class
(b) Different types of games played by the children
(c) Popular brand of cars

Organisation of data helps in bringing about meaningful conclusion from the data. For example, a group of students of Class VI took part in a music competition. The judges gave the following grades: 2, 4, 5, 1, 3, 2 etc. Does it make any sense to you? This is data but not meaningful. To make the data meaningful, we have to arrange the data in a tabular form.

Hence, understanding and analysing the data become easier by means of tables or pictures. 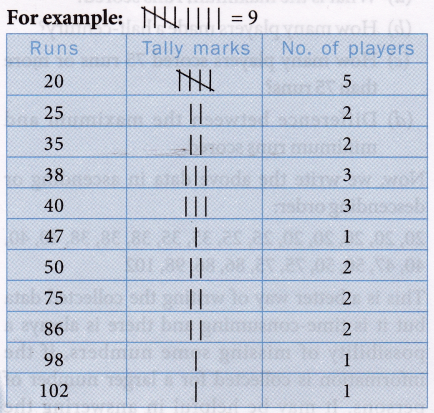 Finally after counting tally marks the actual numbers can be written in the third column which represent frequency. Now, looking at the table we can easily answer the questions (b) and (c), i.e., 2 and 6 respectively.