Cold War Essay: After the Second World War, the USA and the USSR were the two supreme powers in the world. Hence, both these nations tried to reduce the power of the other indirectly.

We are providing children and students with essay samples on an extended essay of 500 words and a short piece of 150 words on the topic “Cold War” for reference.

Cold War was the state of mounting tension between the USA and Soviet Russia after the Second World War was over for Supremacy in the world as the Super Power. The United States of America became the representative of the capitalist countries, and the Soviet Union Russia became the representative of communism. Hence, there was an ongoing rivalry between the two great powers. Since this rivalry did not result in a war, but only in diplomatic incidents, it is called the Cold War.

When Hitler invaded Russia, Roosevelt, the then President of the United States sent supplies for the troops. It could have started the degradation of the relationship between the USA and Russia. When Stalin defeated Germany and wanted to implement communism, he was suspected, and since then, suspicion arose between the western countries and Russia. Hence, Cold Was began.

You can now access more Essay Writing on Cold War and many more topics.

After the Second World War, Soviet Russia had manufactured much ammunition and arms. Hence, the USA saw them as a threat and created the atom bomb, hydrogen bomb and other such lethal weapons. Other European countries also participated in the rivalry with Russia, and this divided the world into two halves.

Soviet Russia continued to spread communism is its mass media and wanted to spread it everywhere to encourage their labour revolution. Meanwhile, America helped the capitalists against the communists. The difference in the doctrines led to the intensified Cold War situation.

After the USA bombarded the atom bomb on Hiroshima and Nagasaki, Soviet Russia was afraid that they would face similar consequences. Hence, they increased their military and weaponry strength. It also deemed to intensify the Cold War.

When veto was implemented, Soviet Russia used it to reject any statement that the USA made in the UNO council. Hence, the western countries were insulted by it. The incident led to more intensification of the Cold War.

Cold War resulted in the fear and suspicion between Russia and the USA. It created tension between the nations permanently. There were several alliances solely to increase its intensity. Cold War resulted in unnecessary expenditure on military power. It created poverty and decreased the living conditions of people. It is a useless and meaningless war which divided the world in an irreparable way.

Cold Was disturbed world peace. There is still suspicion among these two nations and the counties that support them. It also created a clear demarcation between the first, the second, and the third world counties. It resulted in divided humanity, and there is no perpetual peace partially for this reason. 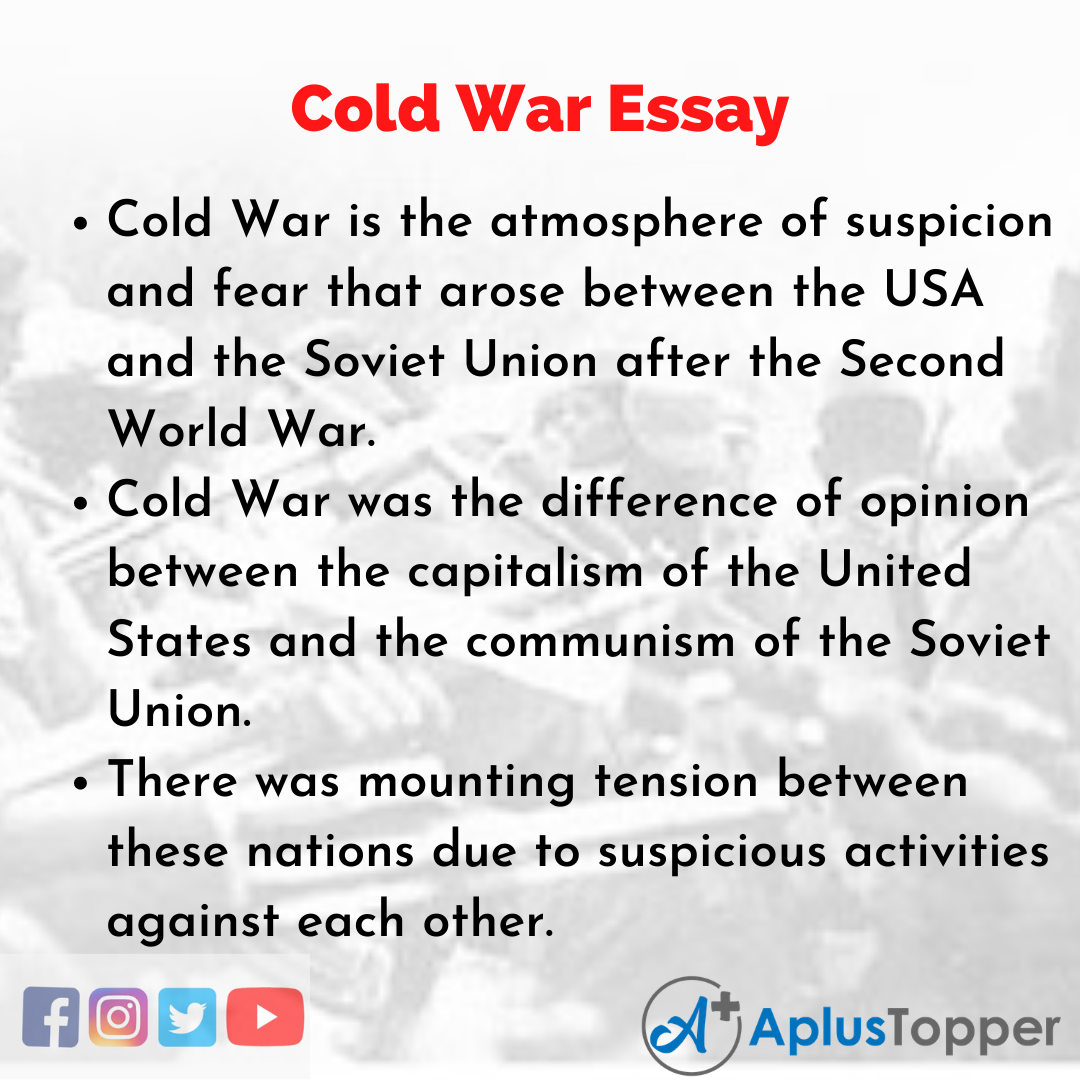 Cold War was the crisis that arose due to many diplomatic differences between the Super Powers of the World, the United States of America and Soviet Russia, after the Second World War.

Cold War was an affair of the 20th century, resulting due to a series of incidents which led to their differences. Some of these incidents were the competition of the western countries to implement capitalism and Soviet Russia trying to propagate communism.

The USA directed many diplomatic incidents and supported in the destruction of USSR indirectly. In return, Soviet Russia used its veto power to oppose anything said by the USA. There were many phases of the Cold War, spanning for decades.

The Cold War demarked the world into three fragments- the first world countries, the second world counties, and the third world counties. It is a situation directed against humanity. It creates division and suspicion among the nations. World peace is unachievable partially due to the Cold War and its far fetching results.

1. Cold War is the atmosphere of suspicion and fear that arose between the USA and the Soviet Union after the Second World War.
2. Cold War was the difference of opinion between the capitalism of the United States and the communism of the Soviet Union.
3. There was mounting tension between these nations due to suspicious activities against each other.
4. Cold War was the mutual hatred between the two nations that divided the world into fragments.
5. There was no war between them, but it has far-fetching consequences which are still prominent.
6. Both nations created many societies and organizations to destroy the other.
7. The cold war is a type of diplomatic warfare.
8. Cold War is the enemy of world peace.
9. Both counties wasted a huge amount of money to optimize their military powers.
10. Cold War has created a permanent rift in the relationship between not only the USA and USSR but among all counties that support them. 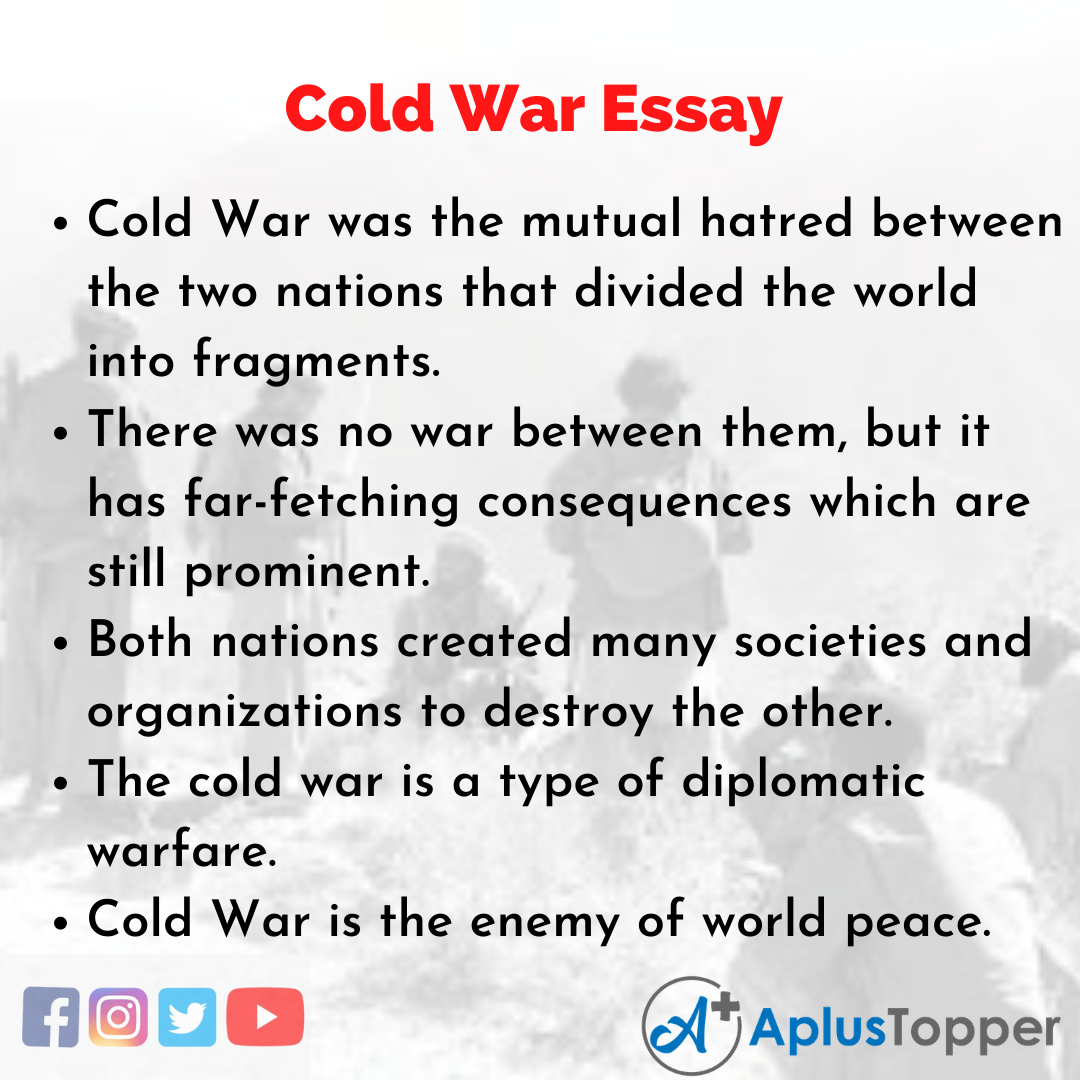 Question 1.
What is Cold War?

Answer:
Cold War is the rivalry between the USA and the USSR to establish themselves as the superpower.

Question 2.
How did the Cold war originate?

Answer:
People find the origin of the Cold War difficult to predict. There is no unanimous answer among the scholars to this question. But it is said that when Hitler invaded Russia, Roosevelt, the then President of the United States sent supplies for the troops. It could have started the degradation of the relationship between the USA and Russia.

Question 3.
When did Cold War commence?

Answer:
Cold war continued for decades in the 20th century and are divided into different phases.

Question 4.
What are the results of the Cold War?

Answer:
It permanently destroyed the communication and friendship between not only the USA and USSR but among all counties that support them. It is a step against the unification of humanity.