Cloud Computing Essay: In today’s scientifically advanced and all IT dominated era, cloud computing is the term du jour. Cloud computing is computing in which large groups of remote servers are networked to allow the centralised data storage, and online access to computer services or resources. Clouds can be classified as public, private or hybrid.

Below we have given a long essay on Cloud Computing of 500 words is helpful for classes 7, 8, 9 and 10 and Competitive Exam Aspirants. This long essay on the topic is suitable for students of class 7 to class 10, and also for competitive exam aspirants.

As a metaphor for the Internet, ‘the cloud’ is a familiar cliche, but when combined with ‘computing,’ the meaning gets bigger and fuzzier. Cloud computing encompasses any subscription-based or pay-per-use service that, in real time over the Internet, extends IT’s existing capabilities. In a cloud computing system, there’s a significant workload shift. Local computers no longer have to do all the heavy lifting when it comes to running applications. The network of computers that make up the cloud handles them instead. Hardware and software demands on the user’s side decrease. The only thing the user’s computer needs to be able to run is the cloud computing system’s interface software, which can be as simple as a Web browser, and the cloud’s network takes care of the rest.

Cloud computing is typically defined as a type of computing that relies on sharing computing resources rather than having local servers or personal devices to handle applications. In cloud computing, the word cloud (also phrased as ‘the cloud’) is used as a metaphor for ‘the Internet,’ so the phrase cloud computing means “a type of Internet-based computing,” where different services – such as servers, storage and applications – are delivered to an organisation’s computers and devices through the Internet.

Cloud computing is comparable to grid computing, a type of computing where unused processing cycles of all computers in a network are harnesses to solve problems too intensive for any stand-alone machine.

The goal of cloud computing is to apply traditional supercomputing, or high-performance computing power, normally used by military and research facilities, to perform tens of trillions of computations per second, in consumer-oriented applications such as financial portfolios, to deliver personalised information, to provide data storage or to power large, immersive computer games.

It relies on restricting sharing of resources to achieve coherence and economies of scale, similar to a utility (like the electricity grid) over a network. At the foundation of cloud computing is the broader concept of converged infrastructure and shared services.

To do this, cloud computing uses networks of large groups of servers typically running low-cost consumer PC technology with specialised connections to spread data-processing chores across them. This shared IT infrastructure contains large pools of systems that are linked together. Often, virtualisation techniques are used to maximise the power of cloud computing.

Cloud computing will become even more prominent in the coming years, with the predicted rapid, continued growth of major global cloud data centres. Cloud computing has been around for quite some time, and goes as far back as the birth of email. But it’s only in recent years that companies have started renting servers and storage instead of purchasing hardware and running it at huge costs.

And with more organisations – especially those that rely on India’s outsourcing infrastructure – transferring some of their IT work onto the cloud, companies such as Tata Consultancy Services (TCS), Infosys and Wipro have stepped up to facilitate that shift. They have positioned themselves as enablers between owners and renters.

A report published by IT research and advisory firm Gartner estimates that in India alone the market for cloud-based services will rise by a third to $557 million this year-, and more than triple by 2018. India’s IT giants are becoming experts at going in early, at the planning stage, and defining what their corporate customers ought to be doing to take advantage of emerging technologies. “They are playing to their strengths, which is services. Even in the cloud, they are in the services [area], specifically focussed on services brokerage,” says Arup Roy, research director at Gartner. They have the advantage of being experts at managing IT back-end for global customers, which will play a crucial role in the shift to the cloud. 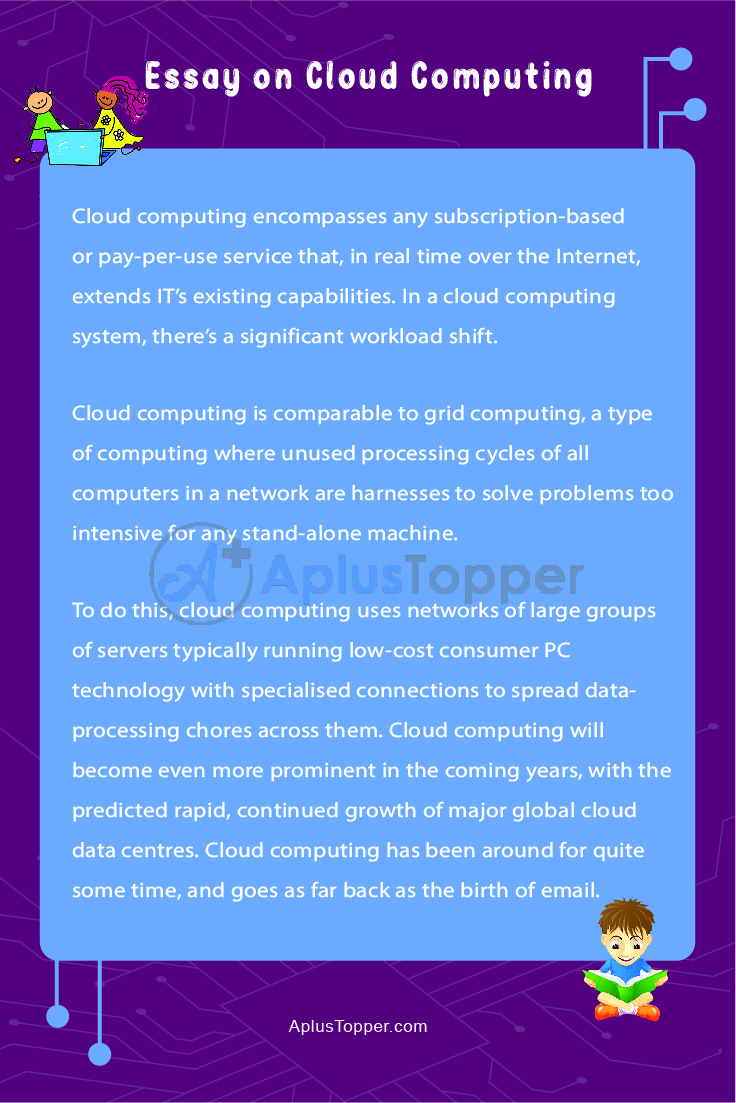 Below we have given a short essay on Cloud Computing is for Classes 1, 2, 3, 4, 5, and 6. This short essay on the topic is suitable for students of class 6 and below.

Users access cloud computing using networked client devices, such as desktop computers, laptops, tablets and smartphones. Some of these devices – cloud clients – rely on cloud computing for all or a majority of their applications so as to be essentially useless without it. Examples are thin clients and the browser-based Chromebook. Many cloud applications do not require specific software on the client and instead use a web browser to interact with the cloud application. With Ajax and HTML5 these Web user interfaces can achieve a similar, or even better, look and feel to native applications. Some cloud applications, however, support specific client software dedicated to these applications (eg. virtual desktop clients and most email clients). Some legacy applications (line of business applications that until now have been prevalent in thin client computing) are delivered via a screen-sharing technology.

According to Gartner’s Hype cycle, cloud computing has reached a maturity that leads it into a productive phase. This means that most of the main issues regarding cloud computing have been addressed to a degree that clouds have become interesting for full commercial exploitation. This however does not mean that all the problems listed above have actually been solved, only that the according risks can be tolerated to a certain degree. Cloud computing is therefore still as much a research topic, as it is a market offering. What is clear through the evolution of Cloud Computing services is that the full form of CTO is a major driving force behind Cloud adoption. The major Cloud technology developers continue to invest billions a year in Cloud R&D, in 2011 Microsoft for example committed 90% of its $9.6bn R&D budget to Cloud.