Civil Rights Essay: The social, political, and legal struggle faced by the Black Americans to acquire full citizenship rights is referred to as the Civil Rights Movement. Besides, another goal of the movement was also to obtain racial equality.

This is also considered the first movement against segregation, customs, and laws to separate the whites and the blacks. It also included the law that was used by the whites to control blacks. After which the abolishment of slavery took place back in the 1860s. This movement led to the individuals challenging discrimination and segregation with several kinds of activities. These activities include boycotts, protest marches, and the refusal of following discriminating laws.

We are providing students with essay samples on a long essay of 500 words and a short essay of 150 words on the topic Bangalore for reference.

In a democratic country, the majority usually does not require protection since the control goes typically over to the majority. However, as witnessed in the historical backgrounds, even the majority can be exceptionally cruel. Thus, sometimes protection is required by the minority from the majority.

The civil rights movement refers typically to the right that an individual possesses, mostly the 13th and 14th amendments. The civil rights movement is one of the most vital parts of the United States and worldwide. This demonstrated the cruelty and unfairness of discrimination, and it won’t be endured anywhere in the country. Thus, it helped to set an example for minorities across the world.

The ending of segregation took place due to the civil rights movement. The entire nation’s social system was designed again. The newly added laws eliminated segregation. It included allowing African Americans to go to schools, colleges, work, and so on. The union of several citizens took place while excluding the type of race to assist a particular group in obtaining a common objective.

Due to factors like violence, poll taxes, and literary rates, African Americans were not allowed to vote. Also, the opportunity to achieve social justice was destroyed almost every time by the Supreme Court. African Americans started to seek the courts’ help to keep their legal rights safe and secure. However, the past legislation of civil rights was challenged, and a set of decisions enabled segregation in the states.

Throughout America, racial separation in the schools was expected back in the 1950s. Even though the schools in a district were intended to offer equality, most of the black schools were highly substandard compared to the white schools.

Even though segregation was not eliminated in the schools, it helped African Americans stand against it. The beginning of the Montgomery Bus Boycott was on 1st December 1995. On that day, the blacks swore to boycott the city’s busses until they were given the right to sit anywhere as per their choice. Gradually, the number of boycotts and riots increased against segregation and discrimination. 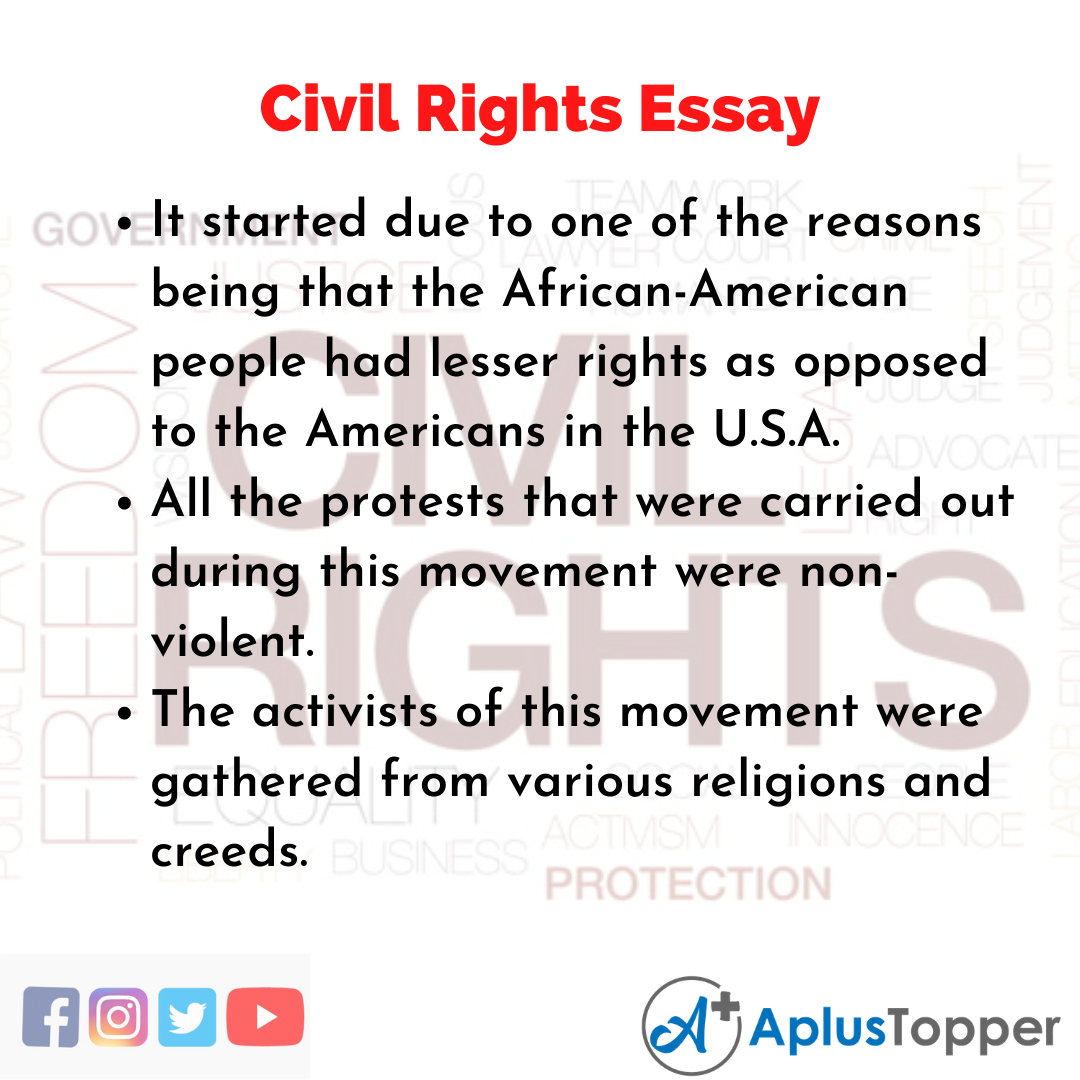 The activities had the sole objective to free African Americans from injustice, social discrimination, political rights, and so on. There were numerous approaches taken up for it, including lawsuits, mass direct action, lobbying, black power, etc.

The central part of the Civil Rights Movement was a march in Washington to acquire both jobs and freedoms. Countless activists got a higher level of acknowledgement. It included activists like Malcolm X, Booker T. Washington, Martin Luther King Jr, etc. There are limitless similarities present between these activities, along with numerous differences.

The black American that was a victim of slavery right from the start is referred to as Booker T. Washington. He claimed that the end of racism would occur after the blacks gather vital labour skills since it will be useful to determine their economic importance or value to society. Several other similar activists fought against such discrimination to obtain freedom and equal rights.

10 Lines on Civil Rights in English Question 1.
What is the reason behind the beginning of the Civil Rights Movement?

Answer:
The major incident that pushed forward the civil rights movement was when Rosa Parks, an NAACP activist, was arrested for not leaving her white man’s seat.

Question 2.
Who was the central part of this movement?

Question 3.
What were the primary aims of the civil rights movement?

Answer:
This lengthy struggle was fought by African Americans to obtain social and academic equality and stop discrimination.

Question 4.
In which year did this movement began?

Answer:
The beginning of the civil rights movement took place in the year 1954.