Christmas Vocabulary: Christmas is a festival which is observed every year on the 25th of December. It celebrates the birth of Jesus Christ, and people worldwide take part in various activities found in the Christmas English vocabulary.

In this article, a list of Christmas vocabulary is put together, which contains Christmas words a-z.

There are various words related to Christmas in the English language, regarding which our knowledge is minimal.

There are many Christmas words and definitions that make the festival unique. Therefore, this article consists of various Christmas vocabulary with pictures that will help you better understand the celebration to expand your vocabulary. 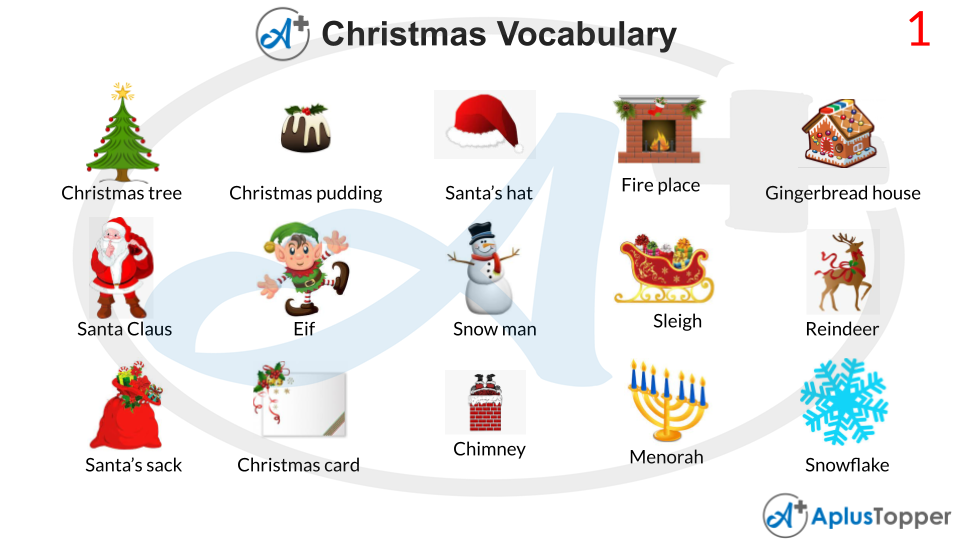 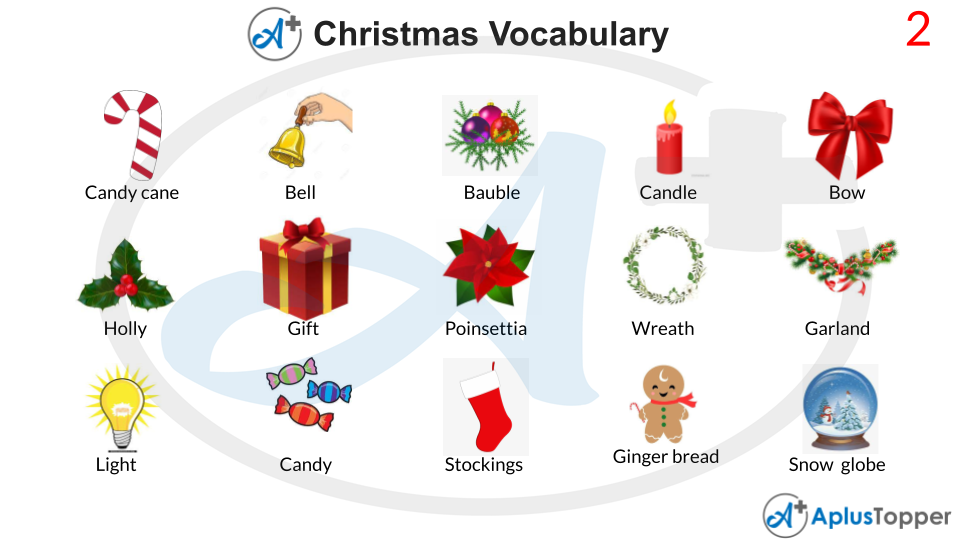 Santa Claus is a legendary character known for bringing toys and candies for good children on the eve of Christmas. He is depicted as a jolly, white-bearded man wearing a red coat, white trousers, and hat. Children and adults all love Santa Claus and await his arrival enthusiastically.

It is a hat worn by Santa Claus. The entire hat is red with white fur at the bottom. The top of the hat comprises a white bobble.

It is a type of sack which is used for transporting gifts and presents for Christmas.

A snowman is a figure of a man created with snow. Generally, for building a snowman, snowballs of three different sizes are made and stacked together. These snowballs represent the head, torso, and bottom of a snowman.

Facial and other features are also carved out on the snow. As accessories, twigs, and branches of trees are used to make the arm, carrot is used for the nose, and scarf or hat is used as clothing for the snowman.

The use of a snowman as a decorative item for the season of Christmas is prevalent. People build a snowman outside their houses in western Europe to celebrate Christmas.

It is a long and slender block of wax that has a wick embedded in it. The wick is lit, and it illuminates light while burning. The flames of a candle symbolize joy and love on the occasion of Christmas. In ancient times, candles were used to decorate Christmas trees, but later they got replaced with Christmas lights.

For a long time, bells have been associated with Christmas. They are rung to welcome the season of Christmas and proclaim the birth of Jesus Christ.

Before starting the services for Christmas Eve, churches often ring bells at midnight and proceed with the services. Small handbells are also used by singers while singing Carol during Christmas.

It is a type of candy that is generally consumed during the season of Christmas. The candy is white with red stripes on it and has a candy cane shape. Usually having a peppermint flavour, other colors and flavors are also available.

It is a type of plant which is endemic to Central America. The poinsettia flowers and leaves symbolize the star of Bethlehem and are also used as decorations for Christmas. The red flowers also represent the sacrifice and crucifixion of Jesus Christ.

A Gingerbread house is a confectionery item that is available in the shape of a building. Used as a decorative item on Christmas, it is baked with cookie dough and is moulded accordingly to form the walls, roof, and house windows.

It is a type of cookie which is consumed during the season of Christmas. It is made up of gingerbread and is cut into the shape of a human figure.

They are cookies and biscuits made up of sugar. According to preferences, they can be of different flavours. These cookies are cut and moulded into various shapes which are related to Christmas.

It is a type of cake which is consumed during the occasion of Christmas. Even though fruit cakes are generally consumed as Christmas cakes, people can consume cakes with other flavors at Christmas.

It is a greeting card that is exchanged on the occasion of Christmas. It is decorated glamorously and contains the wishes and sentiments of the people who are trading it.

Also known as plum pudding, it is a traditional dish that is consumed after Christmas dinner. As a custom, silver coins, tiny wishbone, and silver thimble are inserted as tokens and favours in the pudding.

They are decorative items that are used for decorating the Christmas tree. They come in various geometrical shapes and are not purchased annually but is reused every year.

On Christmas, an evergreen tree like pine or fir is decorated with lights and ornaments and is known as a Christmas tree. A star is placed on the tree, and edible things such as cookies and candy canes are hung as decorations.

Everyone loves fireworks. On the eve of Christmas, people light various Fireworks to celebrate the season of Christmas. In certain places, firework display shows are also arranged.

It is a large sledge that horses generally pull. It is associated with the festival of Christmas since it is said that Santa Claus rides a flying sleigh which is pulled by eight reindeer and delivers gifts to children.

Even though the legend says that Santa Claus rides a flying sleigh, sleighs do not fly in real life.

Carol is a hymn or song which is traditionally sung during the season of Christmas. In Belgium, Germany, and Austria, children dress up as ‘The Three Kings’ and visit different households. They sing carols and are rewarded with money or candies.

It is a type of deer that has longhorns known as antlers. The antlers shed and then regrow each year. Contrary to Christmas folklore, reindeer actually cannot fly.

Stocking is an empty sock or a bag in the shape of a hose, which is generally hung on the fireplace’s mantel or the bedpost before Christmas eve. It is dangled with the hope that Santa Claus will fill it with gifts and candies.

It is a shrub-like tree that produces the red berries commonly seen during the festival of Christmas. The leaves of the tree are leathery and thick and are often used for making wreaths on Christmas. The crown of thorns wore by Jesus Christ is symbolized by Holly.

It is a ribbon that is folded in a particular manner. It is tied around presents to make it look classy and decorated. Bows also symbolize unity and togetherness. Generally, all the gifts which are exchanged during Christmas have a bow tied around them.

It is a wreath or braid of flowers and leaves. Worn either around the neck or on the head, they can also be hung as decorations.

It is a mixture of flowers, leaves, fruits, bells, and other materials to form a ring. These are used as Christmas decorations and represent eternal life.

It is a hollow structure that allows the escape of smoke into the air from the fire inside a building. It is situated at the roof of a building and is usually made up of bricks. According to folklore, Santa Claus uses the chimney as a passage to enter someone’s house and leave them gifts.

A fireplace is seen inside the living room of houses and it heats up the room and creates a nice and warm ambience. It symbolises warmth and compassion.

On the eve of Christmas, the stockings are hung on the fireplace mantel and according to the legend, Santa Claus uses the fireplace chimney to for delivering gifts to children.

It is a Christmas cake that is traditionally served around the season of Christmas. Yule log originated from France and is generally sponge cake with icing and flavoured espresso on top. It has many variants and is usually served by putting a piece on top of another.

It is a candelabra that comprises nine branches and is lit during Hanukkah, an eight-day Jewish festival. Out of the nine branches, candles or oil lamps are held by eight of them. The ninth branch has a shamash, a candle used for lighting the other eight lamps or candles.

The Jews light one branch lamp every day, and it is done for eight consecutive days. It is burned as a symbol of the miracle, i.e., the burning of the Temple menorah for eight days.

Lights are often used as decorations during the festival of Christmas. Along with houses, the use of lights for the decoration of Christmas trees is also widespread. The lights symbolize faith, triumph, and joy.

It is an item or thing given to someone as an offering or out of love or affection. During the season of Christmas, exchanging of gifts is very common. Friends and families exchange gifts with each other.

It is a confectionery item that is served and consumed during various occasions and events. They are available in multiple colors, flavors, shapes, and sizes.

Eggnog is a type of drink that has a rich and sweet flavor. Milk, sugar, egg yolks, whipped egg whites, cream, and nutmeg are the ingredients used to prepare eggnog. It is consumed chilled, and sometimes alcohol may also be added to this beverage.

Eggnog is usually consumed during the season of Christmas. It has a lot of variants and can also be made at home.

Also known as a water globe, it is a type of decoration or a collectable item. A miniature scene along with snowflakes is built inside a glass sphere. The sphere contains transparent liquid and is completely enclosed.

A snowflake is a small piece of crystallized snow. It is extremely delicate and has a six-fold radial symmetric shape. In the season of Christmas, paper snowflakes are made by folding paper and are used as decorations. Snowflakes are a traditional motif for the festival of Christmas.

An elf is a dwarf creature usually seen in folk tales and is extremely difficult to catch. It has a human form with pointed ears and also possesses magical powers.

It is said that elves act as the assistants of Santa Claus and are known to live with him. They make gifts for the children and also take care of the reindeer.