Child Exploitation Essay: Today’s child is the citizen of tomorrow. The condition of a child foretells the future of any society or nation. Children are the real mirrors of the society the quality of 1 life of a child reflects how progressive a society is. With the dawn of the 21st century, child exploitation is one of the biggest problems of the planet, which is increasing constantly. Child Exploitation primarily includes Child Abuse and child labour.

Below we have given a long essay on Child Exploitation of 500 words is helpful for classes 7, 8, 9 and 10 and Competitive Exam Aspirants. This long essay on the topic is suitable for students of class 7 to class 10, and also for competitive exam aspirants.

WHO defines child abuse as “Child abuse or maltreatment constitutes all forms of physical and/or emotional ill-treatment, sexual abuse, neglect or negligent treatment or commercial or other exploitation, resulting in actual or potential harm to the child’s health, survival, development or dignity in the context of a relationship of responsibility, trust or power.”

Millions of children in the world have been forced into child labour owing either to non-schooling or due to dropping out from the school at an early age. So, child labour may be defined as one who has not yet attained the age of 14 years and whose physical, mental and social development has suffered due to his pre-mature employment. Both child labour and abuse are the most heinous and inhuman crimes.

Children make up 36% of our country’s total population. We might boast of being the largest democracy on account of numbers, but we definitely don’t seem to be the greatest one. Due to various circumstances, young children are exploited and are | deprived of the pleasures of childhood. At the age when children should be going to schools or playing at playgrounds, they are burdened with the hardships of life and denied their childhood.

According to the National Child Labour Project 2001 Census, there are 12.6 million working children in India. It is not only in few selected states, but across the length and breadth of the country. A large number of children are employed in various hazardous and non-hazardous activities in the agriculture sector, glass factories, carpet industry, brass industries, match-box factories, on streets as beggars and in hotels.

According to a recent ILO report, about 80% child labourers in India are employed in the agriculture sector. The children are generally sold to the rich moneylenders to whom borrowed money cannot be returned. More than 60,000 children work in extremely inhospitable conditions in the glass and bangle industry under conditions of excessive heat. Almost 4,20,000 children are employed in the carpet industry of India, and more than 70,000 work in match-box factories.

As regard with child abuse, in 2010, the National Commission for Protection of Child Rights received 75 cases of child abuse in India up till 31st October, including cases of corporal punishment. Especially, those in the age group of 5-12 years reported higher levels of abuse. Ranging from incest, rapes, sexual abuse, sodomy, inappropriate touch to sexual assaults, India has an extreme category of child sexual abuse than other kind of abuses. The worst part is that a stunning majority of these cases go unreported. Also, reasons like shame, plain depravity and family honour contribute towards shunning and covering the cases of child abuse. According to a government commissioned survey, more than 53% of children in India are subjected to sexual abuse, but most of them don’t report the assaults to anyone.

Various surveys also brings into light that harmful traditional practices like child marriage, caste system, discrimination against the girl child, child labour and devadasi tradition impact negatively on children and increase their vulnerability to abuse and neglect. Children on street, children at work and children in institutional care reported the highest incidence of sexual assault.

Exploitation traumatises a child in various ways. From not providing required environment for a healthy growth, inflicting physical torture, mental trauma to sexually maltreating a child in any possible way, child abuse stunts the physical and mental growth of the child. While choking, burning, hitting and striking comprise physical abuse, any kind of sexual association in any form between a child and an adult results into sexual abuse. Emotionally, depraving a child, hurting his self-esteem or inflicting any other kind of mental trauma is a physiological abuse against the child. Child abuse may also include not providing required food, shelter, clothing, education and an environment to the child that is necessary for an overall development of his personality.

Young children are being made the prey as they can be paid less or befooled easily. Poverty, illiteracy and insufficient resources in family, force the parents to send their children to work. Also cultural norms, unsuccessful marriage and drug addiction of parents comprise as the main cause of child abuse. Sometimes a child might also be inflicted to exploitation without it being in the notice of the parents, e.g. at school, at the hands of some relatives, the immediate neighbourhood or lured by broker. It can be both intentional or unintentional. Presently, though India has the highest number of sexually abused children in the world, there is no special law in India dealing with child abuse and child sexual abuse.

However, as recent as in 2011, Union Minister of women and child development has introduced the Sexual Offences Bill in Rajya Sabha, to fight against this heinous crime. It aims to provide for stringent punishment of up to 1 0 year’s jail term, which may even be extended to life imprisonment, if warranted.

Various articles of the Constitution prohibit the employment of children in factories. Under Article 24, it has been stated that no child below the age of 14 shall be employed in any factory or mine or any other hazardous occupation or work. Similarly, Article 31 provides that the state shall ensure that adolescent children are not forced to accept an employment detrimental to their age and physical ability owing to economic compulsions.

Children should be provided opportunities to develop in a healthy manner and in a free and respectful environment in which they are protected against exploitation of their childhood and adolescence. The Government of India formulated the National Child Labour Policy in 1987 to tackle this problem. 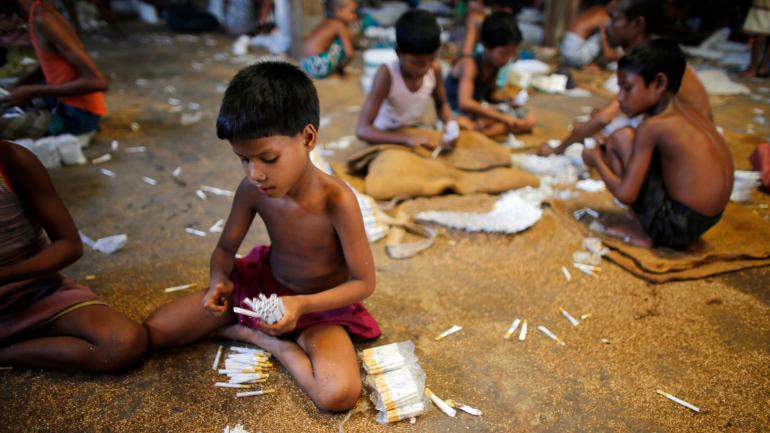 Below we have given a short essay on Child Exploitation is for Classes 1, 2, 3, 4, 5, and 6. This short essay on the topic is suitable for students of class 6 and below.

Through expansion of National Child Labour Projects to various districts, it is focussing towards linking the child labour elimination efforts with the Scheme of ‘Sarva Shiksha Abhiyan’. It ensures that children in the age group of 5-8 years get directly admitted to regular schools and that the older working children are mainstreamed to the formal education system through special schools functioning under the NCLP Scheme.

The problem of child exploitation is an intense socio-economic issue in India that requires long-term multi-pronged strategies to be carried out on a continuous basis. A strong enforcement of the legal acts needs be done to ensure strict action against those who indulge in exploitation. The government, media and NGOs have to unite to play their respective roles in this demanding task only then the evil of child exploitation can be effectively curbed.