Charity Begins at Home Essay: The proverb’s worth is not restricted to simply being a mere proverbial phrase; it is one of the most accurate and most valuable things that are said of the human race. Bluntly, Charity Begins at Home implies that every great act is initiated not on a grand scale, but closer to Home in minor and shorter steps. It can also be interpreted as how one should first practice and implement something oneself before preaching it and flaunting about it.

Charity Begins at Home conveys how our haven is the first place we should change to see the change that we want in the larger world out there. The proverbial phrase is a prevalent one, and we are always told about it. Children are taught about its significance at school, and as adults, we realise its worth in our lives.

Essay on the topic of Charity Begins at Home is very popular for kids studying in schools. For their convenience, we have provided sample essays on the issue below. One Long Essay of 450-500 words is given along with a short article on the same topic of 100-150 words. Further, a set of ten lines has also been provided. The Long essay might prove useful for students in classes 7, 8, 9 and 10, while the short articles might be helpful for pupils studying in grades 1, 2, 3, 4, 5 and 6.

Long Essay on Charity Begins at Home 500 Words in English

The proverb “Charity begins at Home” was first stated by Sir Thomas Browne in his work Religio Medici in the year 1642. However, this was not the first time that the truth behind the phrase was emphasised. For innumerable times before Sir Thomas Browne’s statement, the sentiment had been in preaching and practising. Sir Thomas happened to coin the statement, and ever since we use it in that manner.

Different people can interpret the meaning behind this proverb in various manners. However, very quietly and widely, it implies that the foremost duty and responsibility of every individual on the face of the earth is first to take care and adhere to the needs and requirements of their families. Only when one has fulfilled one’s duties as a familial creature, can one go out and flaunt about any other deed or achievement of theirs.

The proverbial phrase can also be used as a parenting guide for parents and guardians. Children learn from their parents. Home is the first place from where they pick up their cultures, habits and identity. Hence, parents must be conscientious and kind while bringing their children up. Charity begins at Home implies how children grow up and take up the thread of behaviour as left by their parents.

Kids are impressionable, and whatever they see their parents perform, they pick up and make it a part of the person into which they will grow up. Hence, another interpretation of the proverb may be that if parents consciously begin charity at their homes and implement it onto their kids, their kids will also grow up into kind and well-mannered individuals. Parents may well regret the type of person that their kids become when they get older; that usually happens solely to the parents’ fault of not having begun charity at Home, that is, for not teaching ethical values to their kids.

An Individual can flaunt, preach and educate others about the values of being kind, generous and charitable human beings. However, if that individual does not teach in himself the same qualities that they preach about, then their acts and words hold no value or significance. If one wants to bring about a change in the world, one should first change oneself and their near and dear people.

For most people, the phrase is also interpreted very literally. Charity means the act of generosity, kindness and sympathy. When one does charity, it means one is extending one’s assistance and help to another during some adverse situation. If an individual wants to stand and support other people, then they should first begin their acts of generosity at Home. Only by being sympathetic to our family can we teach in ourselves the attitude to become kind towards strangers.

Hence, Charity Begins at Home is one very important proverb that children should be taught about both in schools and their homes. All of us are trained the value of being charitable and kind towards others, but it is also equally important to first be generous to oneself and one’s family and close friends.

Short Essay on Charity Begins at Home 150 Words in English

The proverb ‘Charity Begins at Home’ is one of the most widely used, taught and implemented sayings of all times. The exact phrase was first written down in 1642 by Sir Thomas Browne. However, the act of being charitable first at Home and then to other people has always been followed and practiced since times immemorial.

The phrase is especially famous for people who want to help others and become kind. While becoming type and generous is a very heartfelt aspect of one’s personality, it is vital that one first looks within oneself. Before extending a hand of assistance to others, we must first extend help to our closest ones. People might regard it as being selfish.

However, it is not. Instead of portraying a selfish state of mind, it conveys that one should first be faithful to one’s family and then to other people. It is about not forgetting your roots and honouring them first before anybody else.

10 Lines on Charity Begins at Home Essay in English 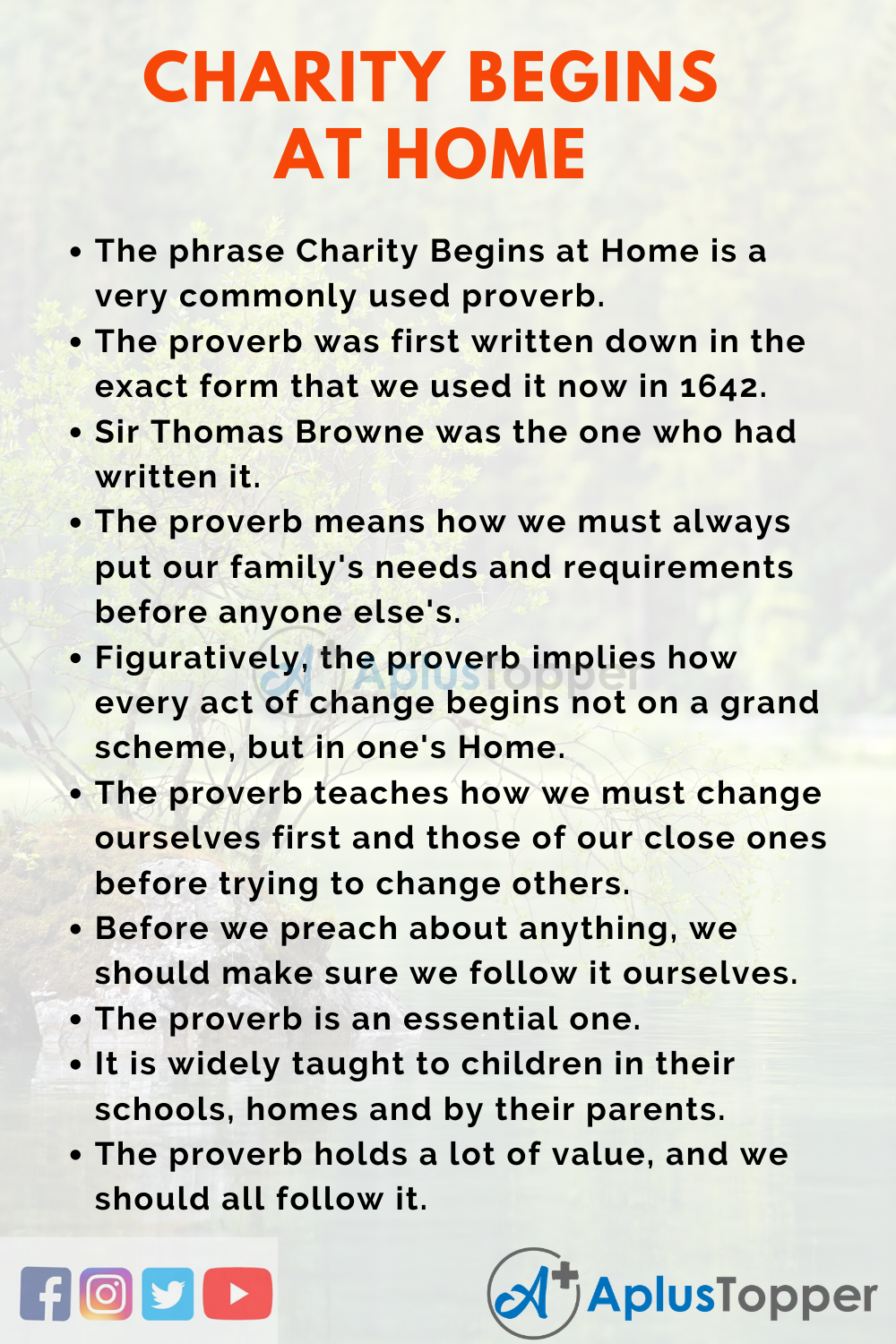 Question 1.
What does Charity Begin at Home mean?

Answer:
It is a proverb that means that an individual would first serve the needs of their families before serving the needs of others. It implies that any act of kindness should first be implemented at one’s Home before it is done on others.

Question 2.
Should we begin charity at Home?

Answer:
Yes. We should all begin charity at home.

Question 3.
From where did the proverb originate?

Question 4.
Who had coined the proverb first?

Answer:
The proverb Charity Begins at Home was first stated and written by Sir Thomas Browne in one of his works called Religio Medici.