Students who are going to appear for CBSE Class 9 Examinations are advised to practice the CBSE sample papers given here which is designed as per the latest Syllabus and marking scheme as prescribed by the CBSE is given here. Paper 6 of Solved CBSE Sample Paper for Class 9 Science is given below with free PDF download solutions.

Question 1.
State the relation between commercial unit of energy and joules.

Question 2.
Name the man made component which is responsible for the depletion of ozone layer.

Question 3.
List in tabular form, the differences between mass and weight.

Question 4.
List two ways in which water is useful to living organisms.

Question 5.
Differentiate between transverse and longitudinal waves and give one example of each.

Question 6.
A source of sound produces 20 compressions and 20 rarefactions in 0.2 seconds. The distance between a compression and the next (consecutive) rarefaction is 50 cm. Find the wavelength, frequency and time period of the wave.

Question 7.
Classify the following animals into their phyla giving one reason:

Question 8.
Define power. Name its S.I. Unit. An electric bulb is rated 15 watts. What does it mean? What is the energy consumed in joules, if it is used for 10 minutes?

Question 10.
State the universal of law of Gravitation.
The mass of Sun is 2 × 1030 kg and that of Earth is 6 × 1024 kg. If the average distance between the Sun and Earth is 1.5 × 1011 m, calculate the force exerted by the sun on the earth and also by the earth on the sun.
OR
A ball is thrown vertically upwards and returns to the thrower after 6 seconds. Find :
(a) The velocity with which it was thrown up.
(b) The maximum height that it reaches. [Take g = 9.8 m/s2]

Question 12.
What is acid rain? Give its harmful effects.

Question 14.
Why is excess use of fertilisers harmful for environment?

OR
Write the electronic configuration and valency of the following:

Question 16.
Explain ‘Potential energy’ in your own words and give an example of it. State the S.I. unit of potential energy. Derive an expression for potential energy of an object of mass ‘m ’ that has been raised to a height ‘h’ from the ground.
A body of mass 20 kg is lifted up by 10 meters. Calculate its potential energy. If this body is allowed to fall, find its kinetic energy just before it touches the ground. [Take g = 10 m/s2]

Question 19.
Explain how animals in Vertebrata are classified into further subgroups.

Question 21.
(a) Derive the formula for universal law of gravitation.
(b) Give the differences between ‘g’ and ‘G’.

Question 23.
The following diagram gives the structure of a nerve cell. Identify the parts labelled as A, B and C respectively.

Question 24.
Give two functions of osmosis.

Question 25.
Represent a wave with low and high amplitude.

Question 26.
How the presence of an air bubble in the liquid taken in the measuring cylinder can affect the volume of the solid?

Question 27.
A rectangular body has dimensions x and y (l and b). If its dimensions get doubled, what will happen to its volume?

Answer 6.
No. of waves = 20
Distance between a compression and the next rarefaction is half of the wavelength. 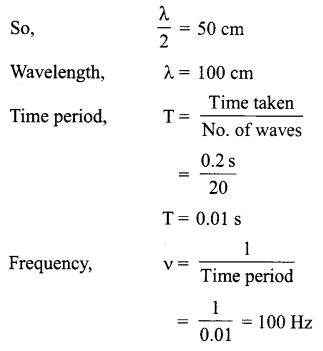 Answer 10.
Universal law of gravitation states that every body in this universe attracts every other body with an the force of gravitation is directly proportional masses of two interacting bodies and is inversely proportional to the square of distance (d2) between them.
Force of sun on earth is, 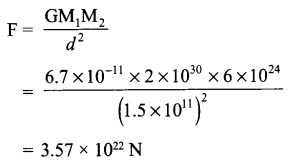 Force of the earth on the sun is the same.

Answer 12.
The gases released due to combustion of fossil fuels are SO2, NO2, CO2, etc. These gases remain suspended in the air.
And when it rains the rain water mixes with these gases to form sulphuric acid, nitrous acid, carbonic acid and came down on the surface of the earth in the form of rain called the acid rain.
Harmful effects of acid-rain:

Answer 16.
‘Energy possessed by object by virtue of its position or configuration’ – to be explained in candidate’s own words.
Example: Stretched string of bow/ a stone lifted to a certain height (or any other appropriate example).
S.I. unit — joule
Let an static object of mass, m be raised to a height h above the ground.

Process: Chromatography
Principle: The coloured component that is more soluble in a solvent rises faster and in this ‘ way, the constituent colours of different dyes present in an ink gets separated.

Answer 18.
1. Similarity: Liquid state is changed into gaseous state in both the processes.

2. The transfer of solids directly into gaseous phase without attaining the liquid state is called sublimation.
Camphor, naphthalene, dry ice.
3. In solids, particles are closely packed with less intermolecular spaces but there are very strong forces of attraction.
In liquids the molecules are far from each other with kinetic energy that enables them to keep moving past each other, however they have less forces of attraction and more intermolecular spaces. 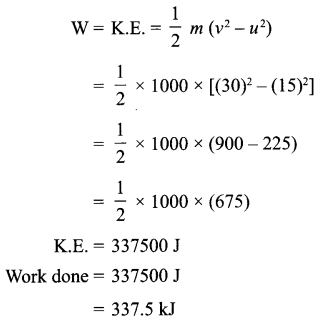 Let the force of attraction between the two objects be F.
According to the universal law of gravitation, the force between two objects is directly proportional to the product of their masses.
F α Mm …(i)

Where G = Universal gravitational constant
(b) 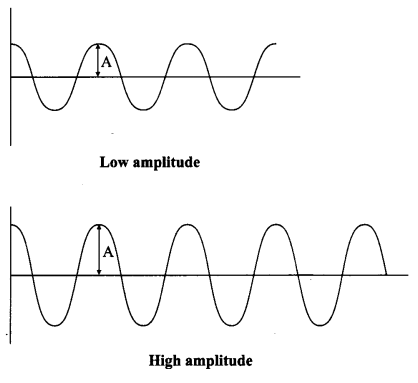